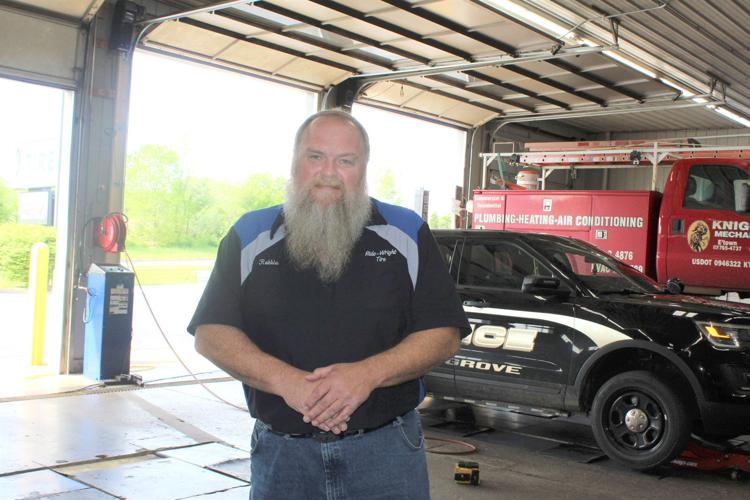 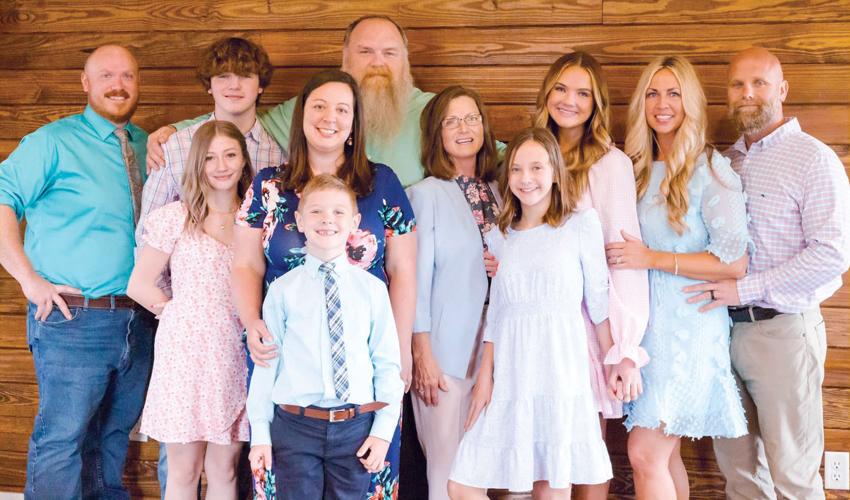 Robbie Wright, center, stands with his wife, Robin, and their entire family, some of whom are employed in the family business. 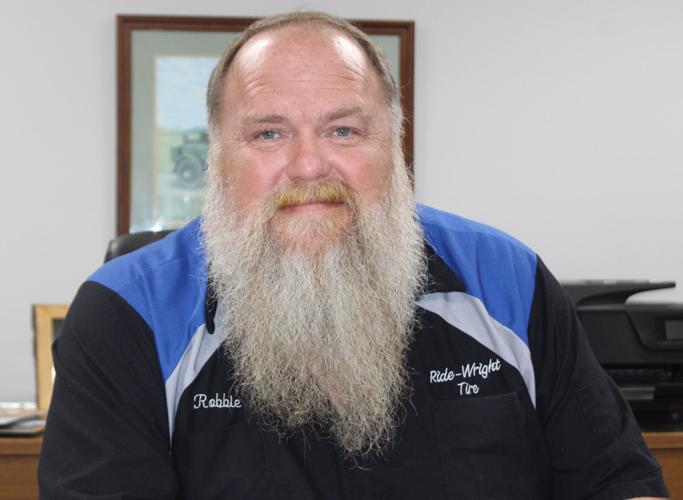 Robbie Wright sits in the office of Ride-Wright Tires which has been in business in Elizabethtown for 27 years.

Robbie Wright, center, stands with his wife, Robin, and their entire family, some of whom are employed in the family business.

Robbie Wright sits in the office of Ride-Wright Tires which has been in business in Elizabethtown for 27 years.

Robbie Wright has been in the tire business a long time.

“I went to work with my father in the tire business when I was old enough to change a tire,” he said.

His father and grandfather both worked in automotives.

Wright, 59, worked with the Kentucky Finance Co. until 1994 when he and Johnny Ricketts decided to open Ride-Wright Tires.

“We’ve been blessed beyond measure,” he said of the business.

Ricketts retired two years ago and Wright worked with him so long, he said he became like family.

Wright said he wanted to do something as a job where he could see his children grow up. His previous job with the finance company required a lot of traveling and he couldn’t be around them as much.

Both his sons now are adults and active in the business. He joked they really didn’t need him there any more but said he loves what he does so he’s sticking around.

“As long as I have life in my body,” he said of how long he’ll work.

Wright’s father told him when he was young “when you no longer whistle on your way to work, you need to change jobs.”

The business has grown from four to 21 employees.

He’s seen a lot of changes in the tire business and business climate.

“You pick the good and move forward,” he said.

It’s been gratifying to be able to have a business his children can be involved in, Wright said. His youngest was 5 years old when his business started.

“I’ve always learned you put God first and family second, and when you do that it will all fall in place,” he said.

Wright joked he’s waiting for his grandchildren to be old enough to work in the business.

“It’s just nice to work in a generational business,” he said.

He has customers who have been with him since his business began and now their children and grandchildren come to him for their car needs.

“Our customers are our friends,” he said.

He said he likes it when a customer’s child calls him with a car issue. He knows they learned that trust from their parents.

Wright has some clients with a fleet of vehicles but he wants to treat the person with one problem the same as someone who sends 150 vehicles in to work on. It’s all about taking care of customers and service not profits, he said.

One of those long-time customers also is a lifelong friend, Kevin Mobley.

“In my opinion, he’s the ultimate businessman, and I’ve never met anybody who takes care of customers more than he does,” he said. “He goes above and beyond.”

Mobley said that’s not just because they are friends, that’s just how he operates his business.

“He takes care of his friends and customers all alike, he always has,” he said.

Wright never forgets how he got to where he is, and he did that based on personal relationships, being friendly and taking care of one another, Mobley said.

Wright also is very charitable to the community, Mobley said.

“His business has always been successful because he’s always been giving to the community in many ways,” Mobley said. “He’s a good community person and people recognize that and want to do business with him.”

Wright’s a good friend with a good family, a good community person and is good to his church, Mobley said.

Wright is friends with other local business owners and said it’s not about being cutthroat.

“I’m grateful to grow up in Hardin County because it’s a network of friends and family that allow me to do what I do,” Wright said.

There’s a sign out front of Wright’s business on the corner of U.S. 62 and Corporate Drive that has become a piece of the community that heralds birthdays, anniversaries and condolences.

That tradition started after he lost a nephew in a tragedy 28 years ago. A friend put the nephew’s name on a store sign.

“I know what an impact that had on my family and that’s what we carry forward,” Wright said.

He told the sign company that recently put up their new sign that it rarely has business information on it and it’s more about the community.

“We’re about community, they’ve allowed us to be here and sustain 27 years of business and we’re very grateful,” he said.

Wright tries to give back through his business when he can and supports schools, police and charitable organizations.

He’s also an avid car collector and has restored several vehicles. It’s a passion he said started when he was around 12 years old. He said what he likes some might think is an ugly car. He likes them all, especially cars from the 1970s.

As cars changed through the years, he said he’s had to adapt. He said there are great cars today which are built well and powerful, fuel efficient and safe.

Wright remembers someone telling him once that no matter what you do in life, give 110% and somewhere along the line it will pay off for you.

It’s not about money, it’s about giving all you have, he said, adding he teaches his children and grandchildren the same thing.

Getting to know Robbie Wright

Family: Wright and his wife Robin have two sons, Jake and Troy, and four grandchildren.