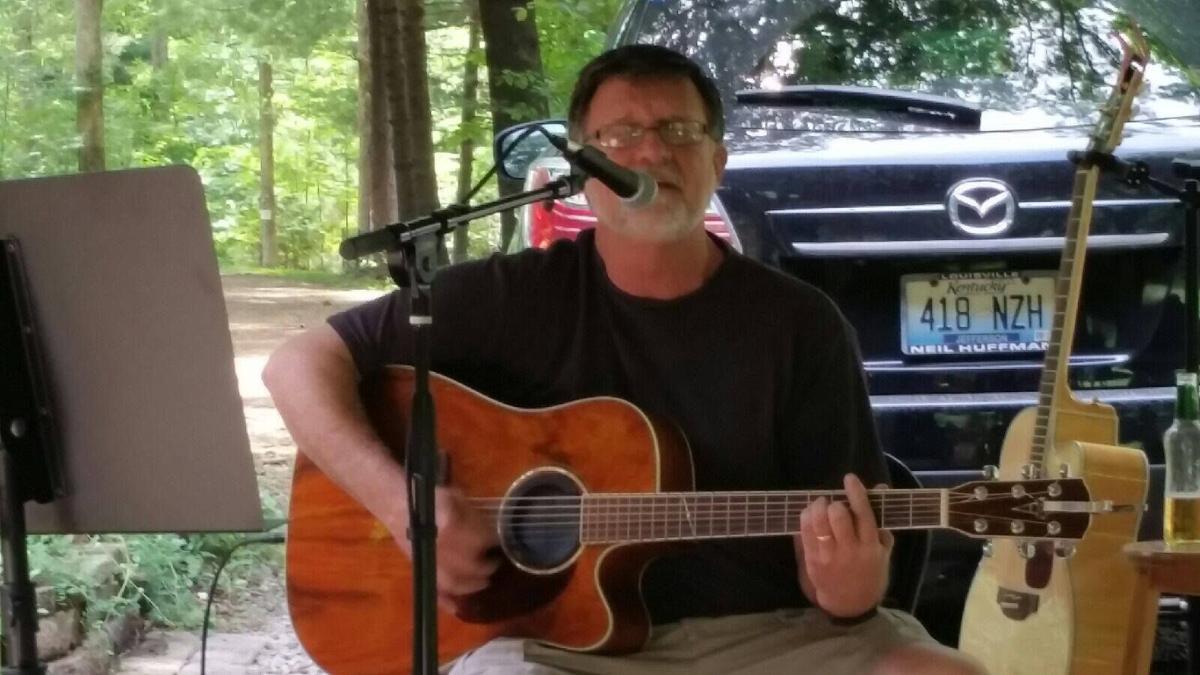 Nate Fowler of Elizabethtown is a songwriter and U.S. Navy veteran. He gives presentations to raise awareness of homelessness among veterans.

Nate Fowler gives a presentation in March to members of a Friday men’s group headed by Lloyd Fish. 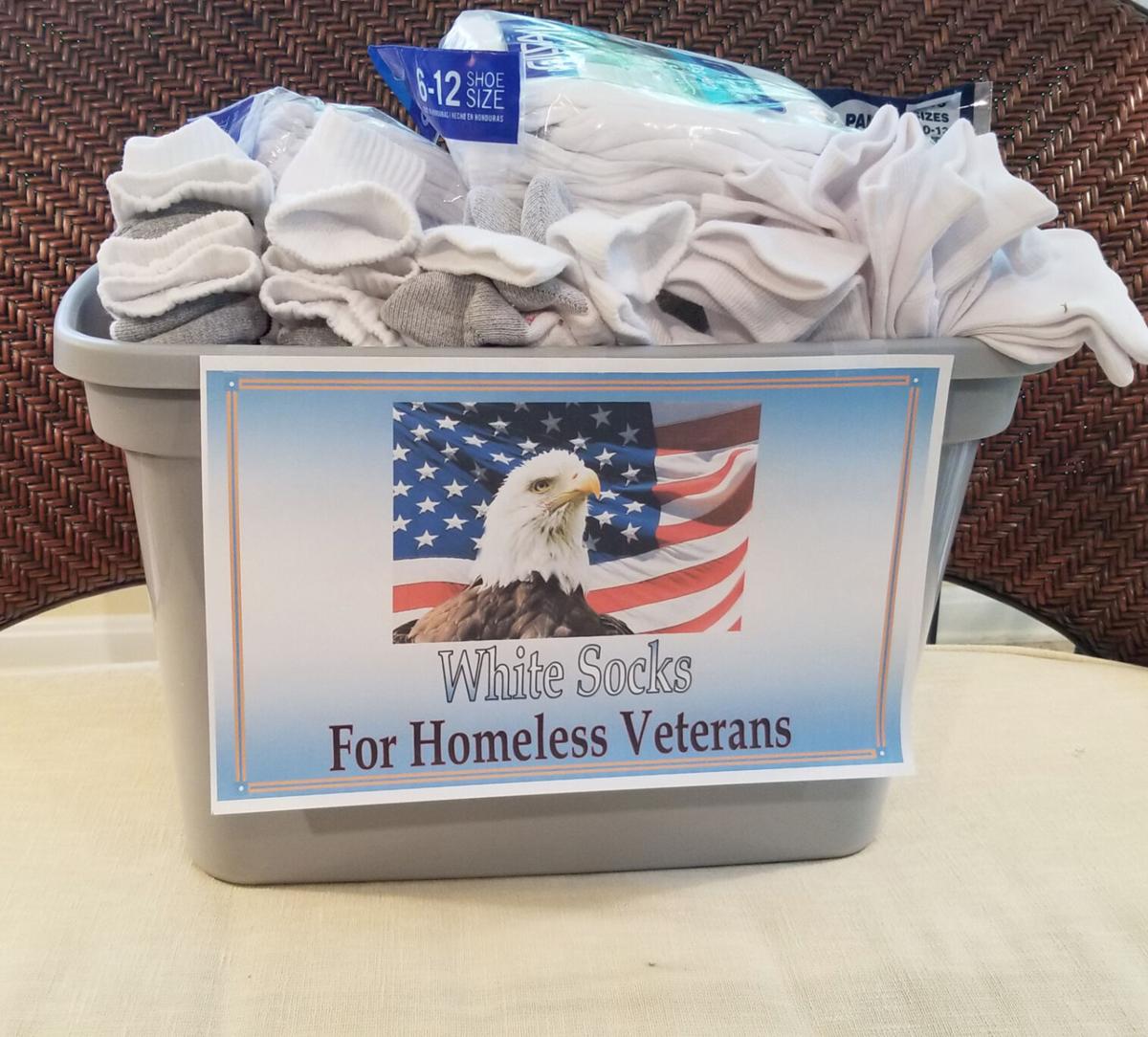 During his presentations, Nate Fowler asks for donations of white socks, which he later donates to organizations such as Wayside Christian Mission, Helping Hand of Hope and Warm Blessings.

Nate Fowler of Elizabethtown is a songwriter and U.S. Navy veteran. He gives presentations to raise awareness of homelessness among veterans.

Nate Fowler gives a presentation in March to members of a Friday men’s group headed by Lloyd Fish.

During his presentations, Nate Fowler asks for donations of white socks, which he later donates to organizations such as Wayside Christian Mission, Helping Hand of Hope and Warm Blessings.

Using his skills in the art of songwriting and his status as a military veteran, Nate Fowler of Elizabethtown has made helping and raising awareness of homeless veterans a post-retirement mission.

For Fowler, this mis­sion began with an original composition entitled “Send Me an Angel.” Originally written about homelessness, Fowler shifted the focus of the song to specifically address homelessness among veterans after playing the song for his publisher. This decision was reinforced for Fowler during a visit to the Robley Rex Department of Veterans Affairs Medical Center in Louisville.

In the parking lot of the VA building, Fowler said he found a worn, yellow brochure that detailed ways to help veterans through the arts. He said this inspired him to use his own talents to give back.

Playing guitar and songwriting for decades, Fowler is a member of the Heartland Song­writers Association of Kentucky and has served as the group’s president.

After showing the lyrics to “Send Me an Angel” to personnel at the VA, Fowler said the VA expressed interest in using a music video for the song for internal purposes. Fowler said in order to accurately tell the story of homelessness among veterans in the video, he felt he first needed to conduct first-hand research on the subject.

“I wanted to make sure what I was showing on that video and what I was saying was right-on,” Fowler said. “I didn’t want to make any mistakes.”

With the help of personnel with the Louisville-based Way­side Christian Mission, Fowler was able to visit homeless camps along the Ohio River about five years ago. Joined by Wayside staff member Dale Pyscher on a rainy night in Louisville, Fowler said he was told to repeat the chant “We are friend­ly, we have food and water, this is Dale” while approaching the camps. He said he also was instructed to shine ­­his flashlight under his chin when approaching homeless campers and to never flash the light upon them.

Fowler said he also was instructed to not bring an umbrella to the camp, as it could be perceived as a weapon.

“Once I got back to the camp – which was like a jungle – I thought ‘Man, if something happens back here, they’ll never find me,’” he said.

When Fowler asked Christy how she became homeless, she told him her husband and two children died in a head-on collision with an intoxicated driver. She also told him she had no extended family or friends to help her through the tragedy and she began self-medicating with illicit drugs, which eventually led to her losing her house and car.

Fowler said despite the circumstances the veterans he met were in, all of them expressed pride in their service during his visit.

“They never spoke ill-will against any of their services,” he said. “... They were still honoring their country and, man, that tore my heart out.”

Filmed in an aban­doned house in New­port, Fowler portrays a homeless veteran in the “Send Me an Angel” video. The video was produced by Cin­cinnati-based Lynest Media.

Now, Fowler uses the “Send Me an Angel” video to raise awareness of homelessness among the veteran community. Since 2019, he has included the video in a presentation which details his experience meeting homeless veterans in the river camps. The presentation also includes Fowler’s song “Teardrops to Heaven,” a song about grief he played for Christy during his visit.

Before visiting local group meetings to give his presentation, Fowler asks for donations of white socks, which he later donates to organizations such as Wayside Christian Mission, Warm Blessings and Helping Hand of Hope.

For Fowler, raising awareness of veteran issues is a personal endeavor, as he himself is a military veteran. Born in Louisville, Fowler graduated from Southern High School in 1975 and went on to join the U.S. Navy. While stationed at Naval Base San Diego, Fowler primarily served as an electrician, working in areas of Asia such as the Philippines, China, South Korea and Japan.

Fowler was medically discharged from the Navy in 1978 and went on to work at his father’s automotive business before taking on a more than 30-year career as a service and planning representative with IBM.

When Fowler ends his presentations, he often leaves his audience by saying “Funny how life can lead you, especially if you open your heart. I started as an auto mechanic, U.S. Navy sailor, husband, father, IBM rep, songwriter and, now, I’m a professional sock collector.”