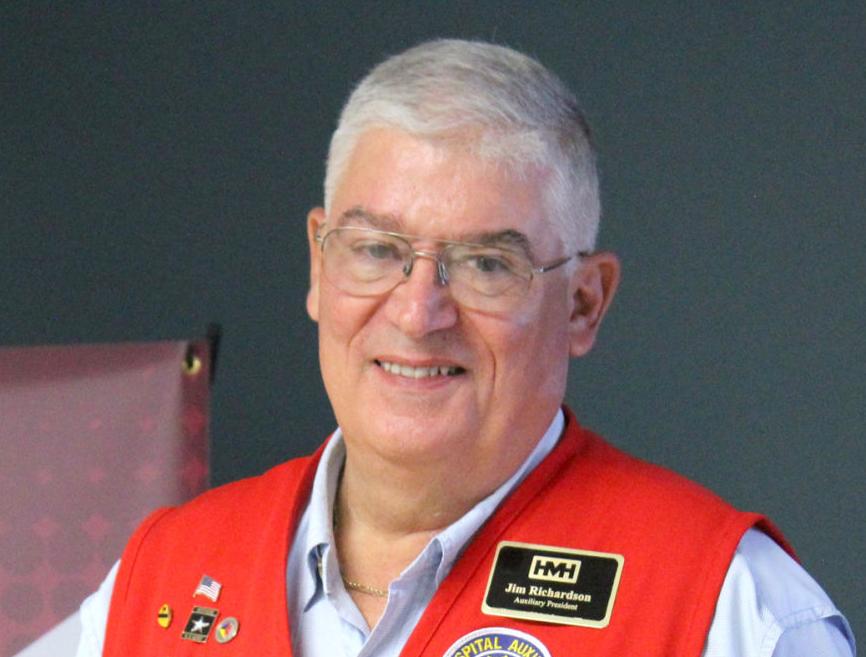 Jim Richardson is the HMH Auxiliary President and volunteers on the Hip and Knee Replacement Therapy floor at the hospital. 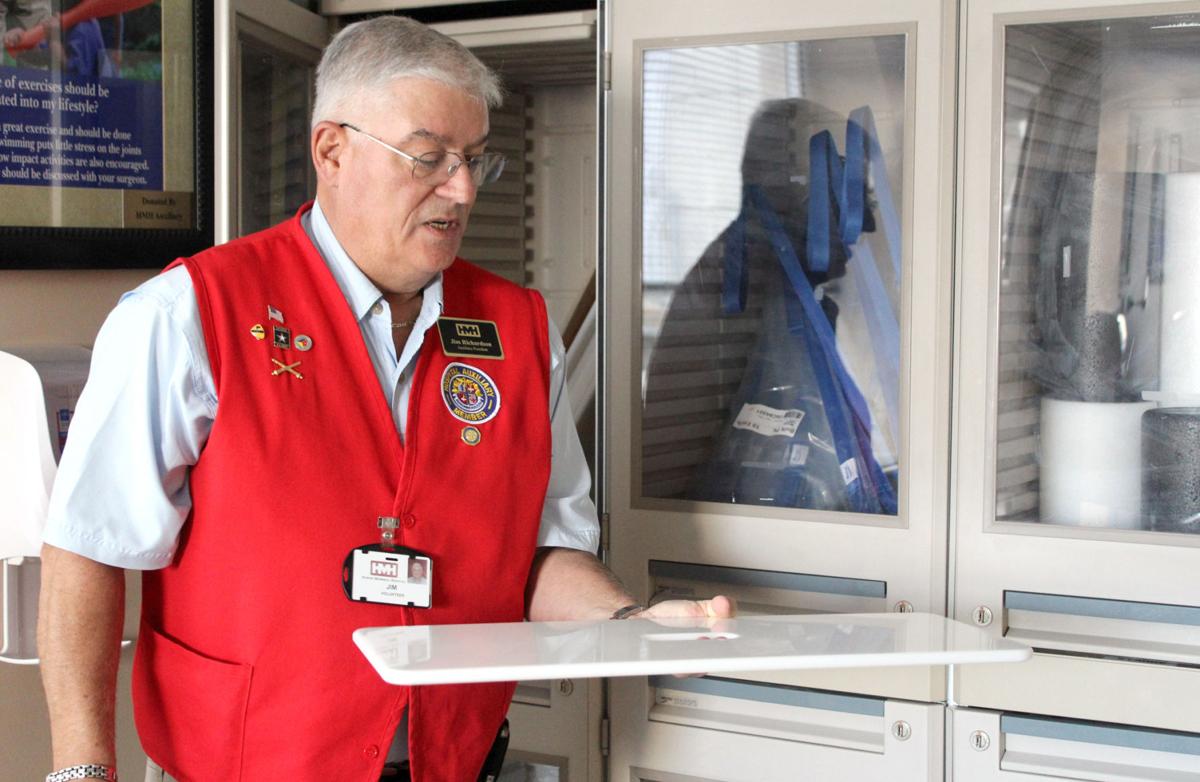 Jim Richardson describes the equipment he gets out for the patients on the hip and knee replacement floor as he gets them ready for therapy. 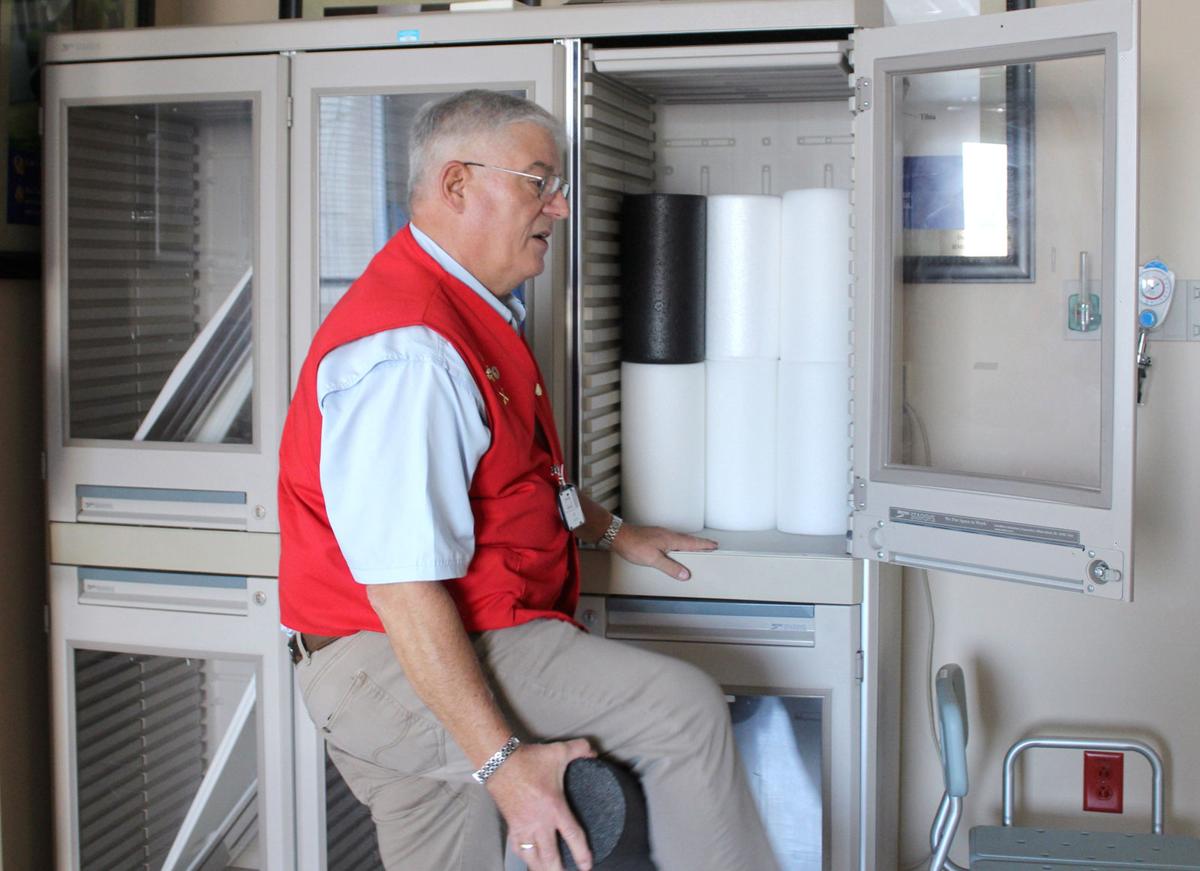 Jim Richardson demonstrates what patients do with a foam roller during therapy on the hip and knee replacement floor. Richardson had two knees replaced himself before volunteering.

Jim Richardson is the HMH Auxiliary President and volunteers on the Hip and Knee Replacement Therapy floor at the hospital.

Jim Richardson describes the equipment he gets out for the patients on the hip and knee replacement floor as he gets them ready for therapy.

Jim Richardson demonstrates what patients do with a foam roller during therapy on the hip and knee replacement floor. Richardson had two knees replaced himself before volunteering.

With two knee replacements himself, Jim Richardson volunteers to help others with post-surgery therapy at Hardin Memorial Hospital.

The 66-year-old helps with hip and knee replacement therapy after having his own good experience.

“I was blessed with two titanium knees that work well, I thought, I can help people do that,” he said.

He said he had support when he got his knees replaced and he wanted to, in turn, do that for others.

The hardest part of the joint replacement process is the therapy. He thinks it helps people to see someone who had the same procedure and knows what they are going through, he said.

Richardson likes making people smile, especially in the hospital when they are not in a smiling mood, he said.

While volunteering, he’s also able to visit members of his church, Northside Baptist, who may be in the hospital. He teaches an adult Bible study class at the church.

On top of what he does with hip and knee replacement, he’s now president of HMH Auxiliary.

The previous president, Pat Howell, is involved in a lot in the hospital and the community, he said.

When they called and ask­ed if he would serve as pres­ident he said, “Sure I’ll do it because I don’t think anyone wants to follow Pat.”

“I think it’s the right thing at the right time because we needed a change of emphasis,” he said.

The focus now is on recruitment because there are 140 active volunteers but the numbers are declining, he said. The auxiliary is participating in retirement days at Fort Knox and reaching out to other retiree groups in search of new volunteers.

Volunteers can be found throughout the hospital and other HMH properties.

“I think you can just about walk into any area and you can find volunteers,” he said, mentioning volunteers can be found in the gift shop, information stations, cardio, the women’s clinic, cancer center, records and pretty much anywhere.

“I have a heart for it,” he said of his volunteering.

“Jim is great advocate for the HMH Auxiliary,” HMH Director of Volunteer Services Kevin Hilton said. “As previous leaders before him, he is very motivated to grow the auxiliary and is eager to share the benefits of volunteering with the community.”

Before retirement and volunteering, Richardson served in the military.

He’s from Oklahoma and met his wife Claudia in college. He jokes they were meant to be because their Social Security numbers are only one digit apart, even though they were born in different counties, three months apart. Richardson was commissioned in artillery in 1977. He served at a variety of posts stateside and served in Germany twice. He also served in the Persian Gulf.

He later served at Fort Knox with the ROTC. At that time, their two children were in school and he was prepared to go to his next assignment at Fort Sam Houston in Texas. Then he found out he was going to be sent back to Europe for six months. They decided instead to stay in Hardin County and retired after he finished his last assignment. “I feel blessed because things have worked out in life through the army and other things,” he said.

After retiring from the military, he was a contractor in fire support for 15 years on post.

He and his wife, a former teacher, have been retired for five years.

They lived in Radcliff and attend­ed Mill Creek Bap­tist Chur­ch until moving to Eliza­beth­town where they now are part of Northside Baptist.

In their free time, he and his wife take a fifth wheel camper traveling.

Getting to know Jim Richardson

Family: Richardson and his wife, Claudia, have two children and five grandchildren.

Favorite movies: “The Last of the Mohicans” and “The Patriot”