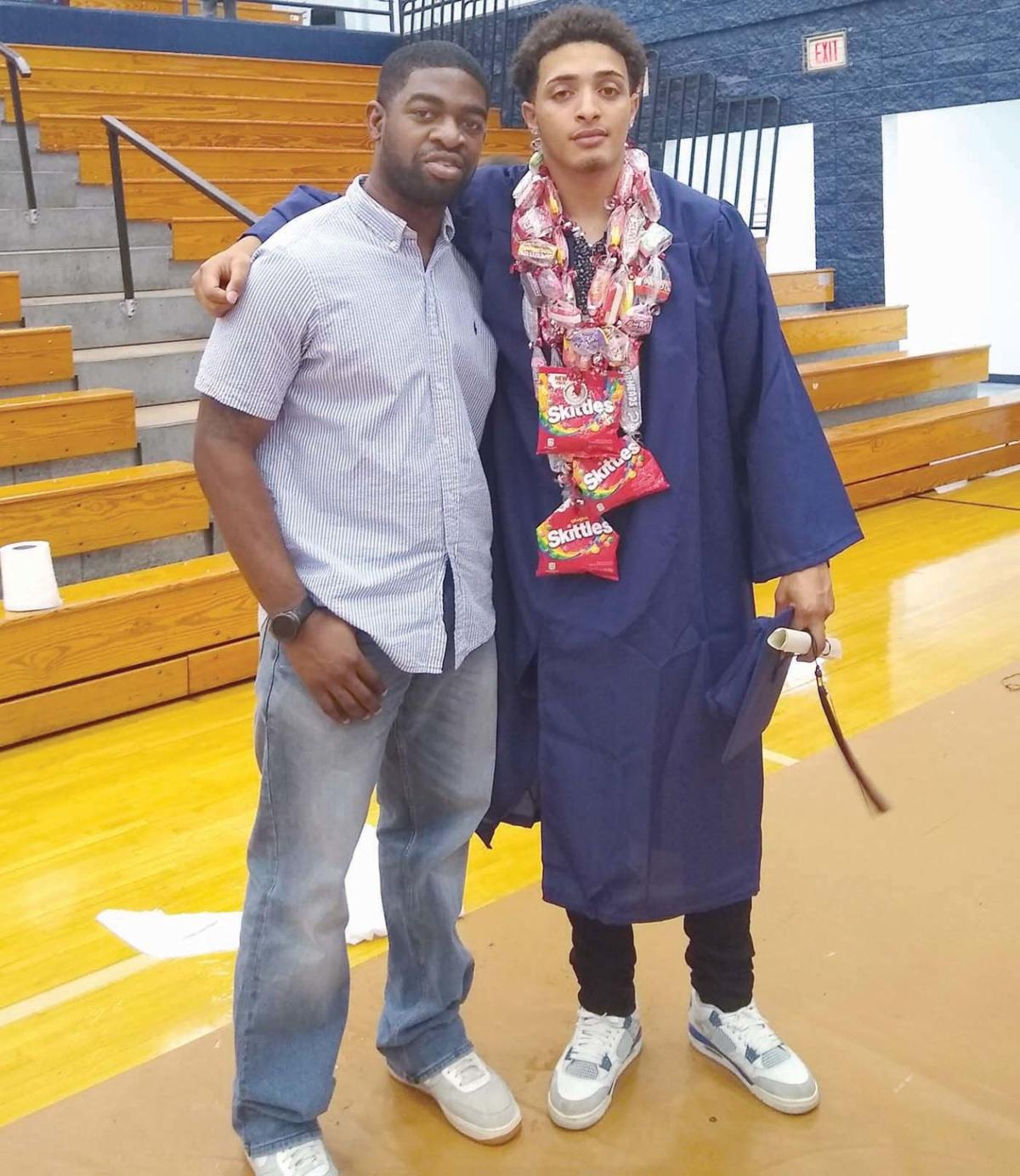 Morning stands with fellow Bluegrass Middle School and John Hardin High School alumnus Josh Garrett. Morning worked with Garrett through the Youth Service Center while he attended Bluegrass and still keeps in contact with him, watching him graduate from high school last year. 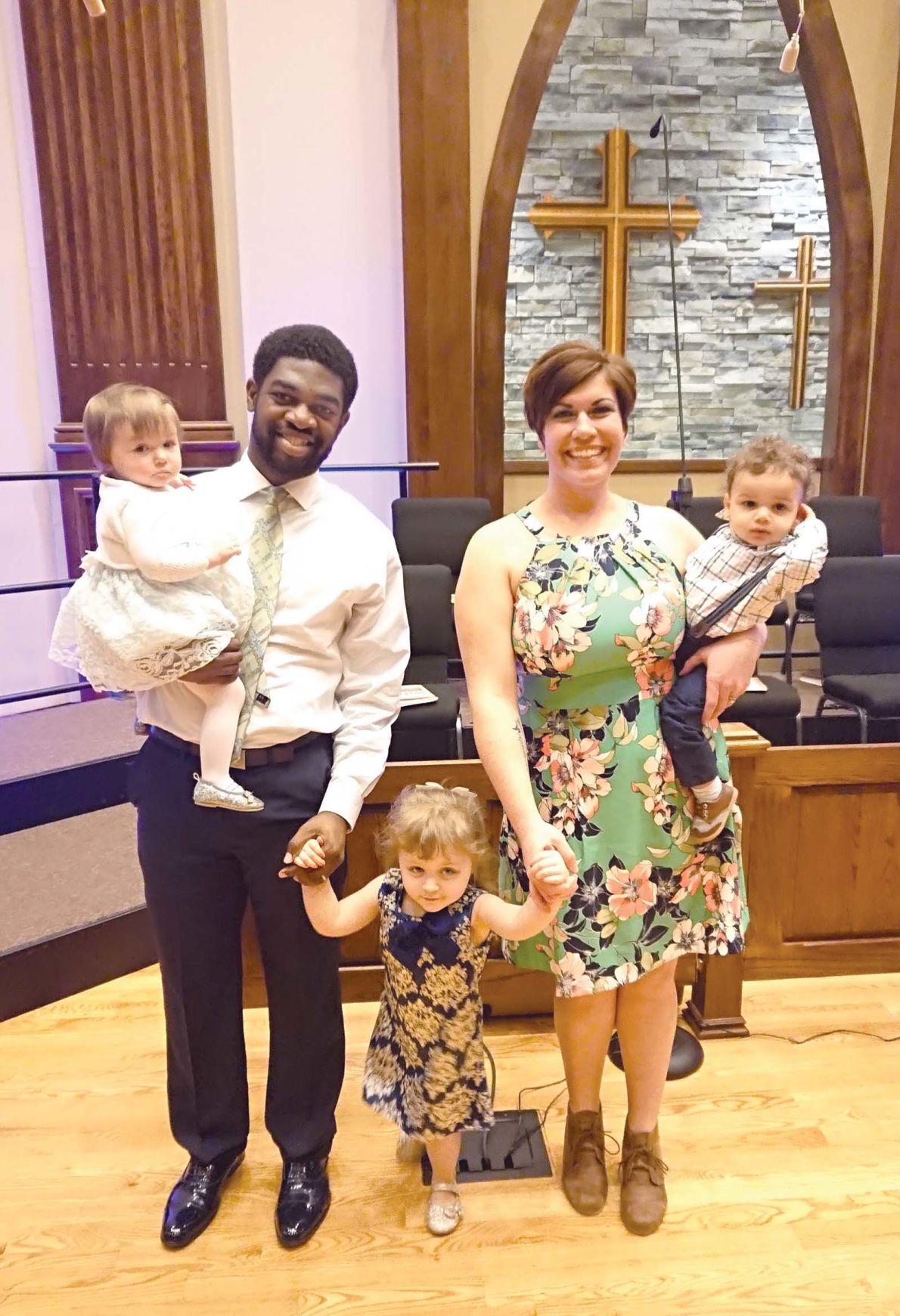 Jerren Morning stands with his family at Glendale Christian Church, where he serves as a deacon. A former student at Bluegrass Middle School and John Hardin High School, Morning serves as coordinator of the Youth Service Center at Bluegrass.

Morning stands with fellow Bluegrass Middle School and John Hardin High School alumnus Josh Garrett. Morning worked with Garrett through the Youth Service Center while he attended Bluegrass and still keeps in contact with him, watching him graduate from high school last year.

Jerren Morning stands with his family at Glendale Christian Church, where he serves as a deacon. A former student at Bluegrass Middle School and John Hardin High School, Morning serves as coordinator of the Youth Service Center at Bluegrass.

An alumnus of Bluegrass Middle School and John Hardin High School, Morning moved to the area in 2001 just before he started eighth grade. Morning said his father served in the U.S. Army for more than 25 years and his family came to the area by way of Fort Knox.

A former basketball and football player at John Hardin, Morning said his experience as a student at Hardin County Schools influenced his decision to pursue education locally.

“I definitely feel like I wanted to be a part of this community when I graduated and grew up,” he said. “I feel like I had such a rewarding time in my five years in Hardin County Schools. I definitely wanted to come back and give back to the community.”

After graduating high school in 2006, Morning went on to pursue a degree in psychology from the University of Louisville. While attending social work classes at the university, Morning said he learned about the function and importance of family resource and youth service centers and decided to pursue a career in youth service.

Morning joined the staff of Bluegrass Middle School in 2012. He previously worked as a children’s case manager with Communicare.

Around the same time, he accepted his position with Bluegrass, Morning began serving as a coach for John Hardin’s football team, a role he filled five years.

Through the Youth Service Center, Morning said he focuses on addressing non-cognitive barriers in learning among students. He said some of these components include substance abuse education, career exploration, health services referrals and family crisis and mental health counseling.

John Hardin Youth Service Coordin­ator Peggy Snow said Morning has a way of lighting up any classroom he enters.

“Jerren is able to communicate his respect for the student, his belief in the student’s ability to achieve and his true concern for their wellbeing with each interaction,” she said,

During a typical week, Morning said he is closely working with students at Bluegrass to ensure they are building social skills and growing in their maturity. He also is involved in family crisis intervention when the need arises.

“Every day ends up looking different,” Morning said. “We never know when a student or a family is going to be in crisis, and when that happens, routine for me goes out the window and I try and find a way to serve that family the best I can.”

Other roles Morning takes on through his job include inviting speakers and performers to the school, arranging events for parents and guardians to meet with students for breakfast or lunch, assisting with after school tutoring, helping students excel in their MAP tests and more.

One of the youth service center’s most recent developments is the Watch D.O.G.S. program, which uses father figure role models who volunteer to inspire youth. A national program founded in 1998, it has been used in more than 6,000 schools throughout the country. D.O.G.S. is an abbreviation for “Dads of Great Students.”

Morning said it has been rewarding to help develop programs for local youth to succeed.

With recent statewide school closures because of the COVID-19 pandemic, Morning’s role at Bluegrass has substantially changed in recent weeks. He said his current responsibility is helping coordinate the school’s breakfast and lunch delivery service.

“It is a growing list as more and more people are being told to stay home from work,” he said.

Outside of Hardin County Schools, Morning also serves as a deacon at Glendale Christian Church. He took on this service role within the church in 2018.

Morning’s compassion for youth also has extended to his personal life. For the past few years, Morning and his wife Jamie have fostered children and have adopted three children in the community in need of a family.

“The most fulfilling part of our foster care and adoption journey is how our three kids have been loved so much by all of our friends and all of our family from the first day they were placed in our arms,” Morning said, “Our three children know that they are Mornings and there isn’t a soul that could tell them different.”

“He is deeply dedicated to the success and well-being of any child,” she said. “Stu­dents trust him and know they can talk to him about any issue they are having.”

Getting to know Jerren Morning

Favorite books: “Fire­starter” by Stephen King and “The Moves Make the Man” by Bruce Brooks.

Hobbies: Spending time outside with family, playing flag football and basketball with friends.