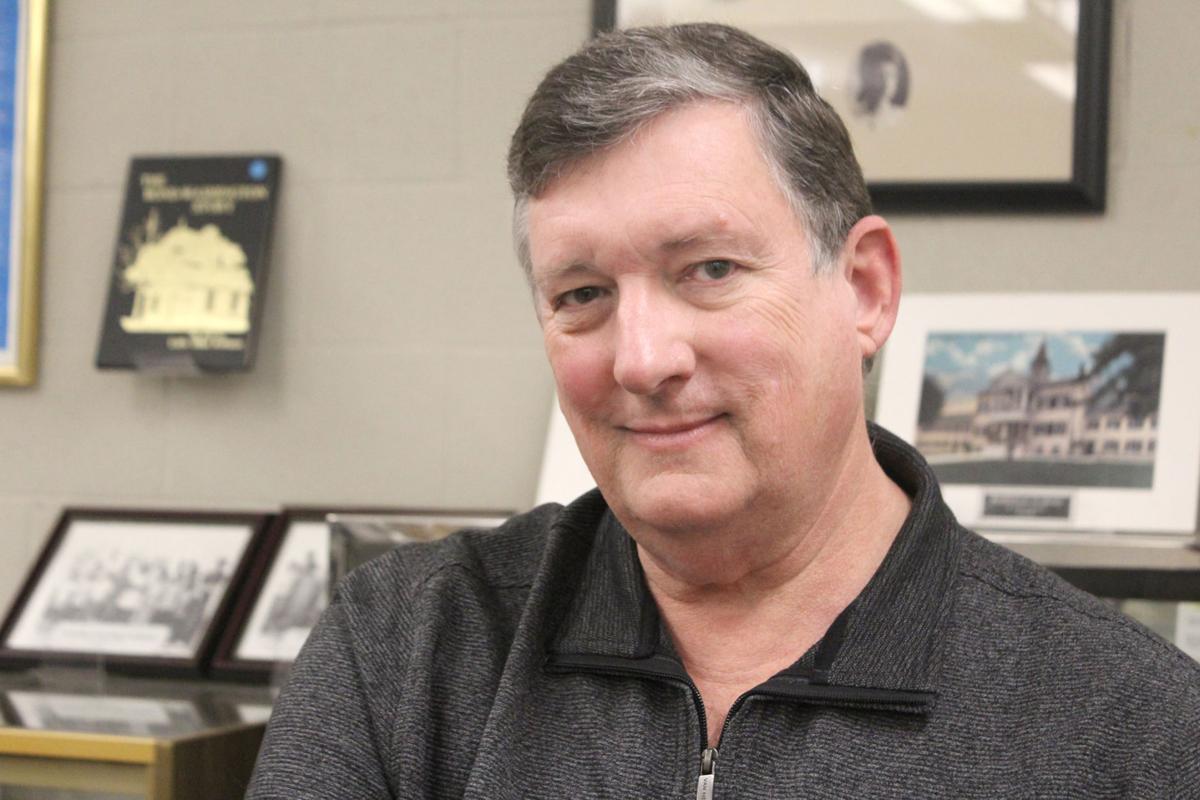 Kevin Kristen is an Army veteran who donates many hours to the Hardin County History Museum. 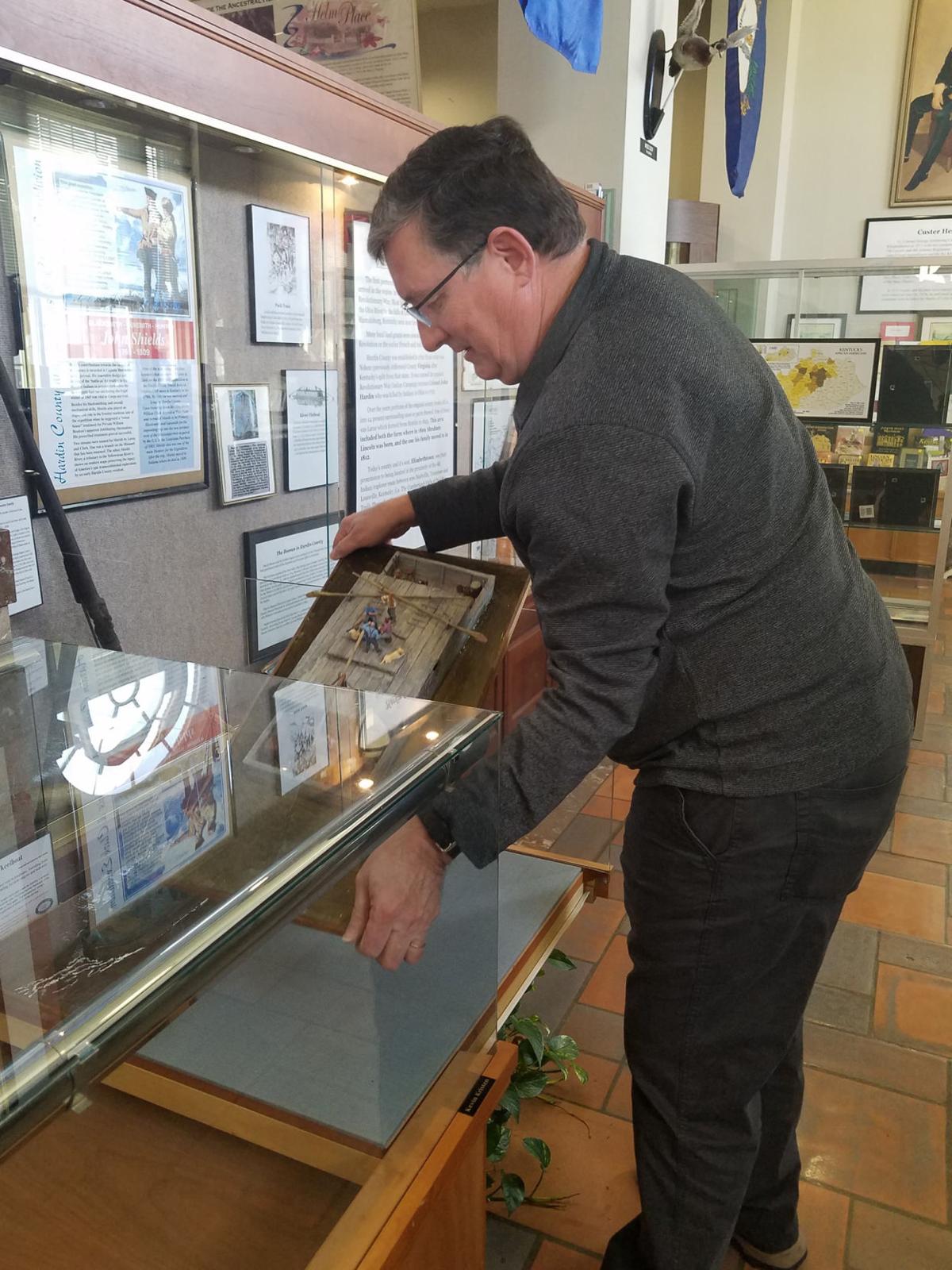 Kevin Kristen, a long-time volunteer at the Hardin County History Museum, displays a flatboat model he made for an exhibit. 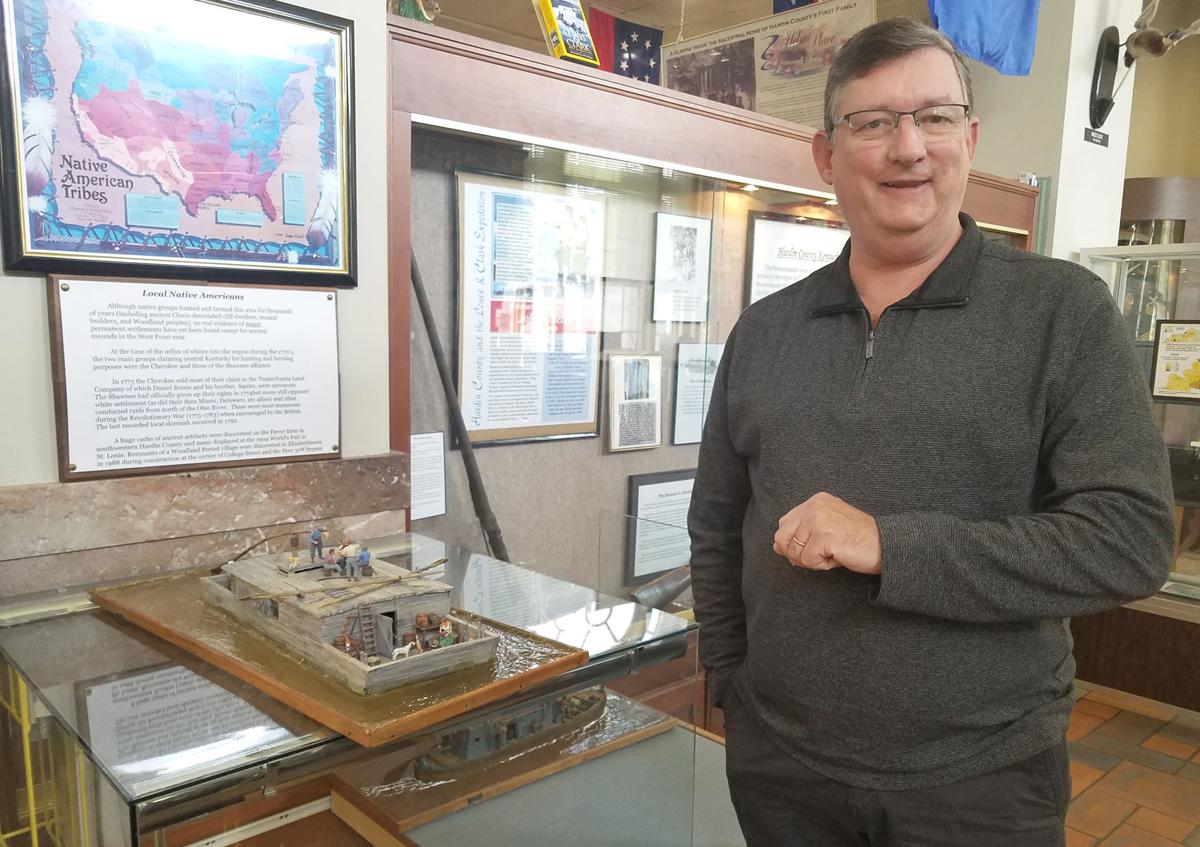 Keven Kristen explains a flatboat model he created for display at the Hardin County History Museum. 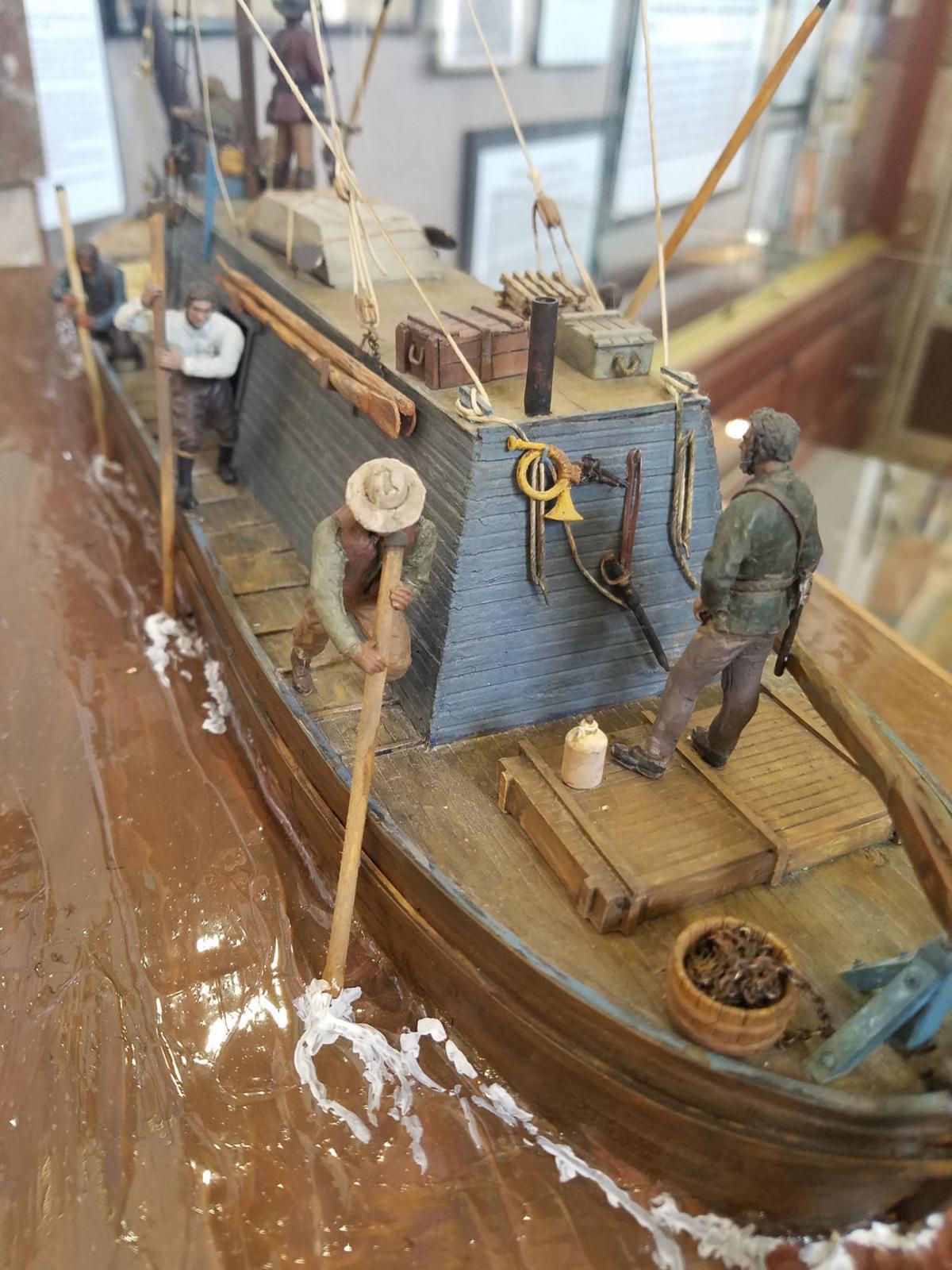 A model Kevin Kristen made for the Hardin County History Museum. It took years to create the finished piece. 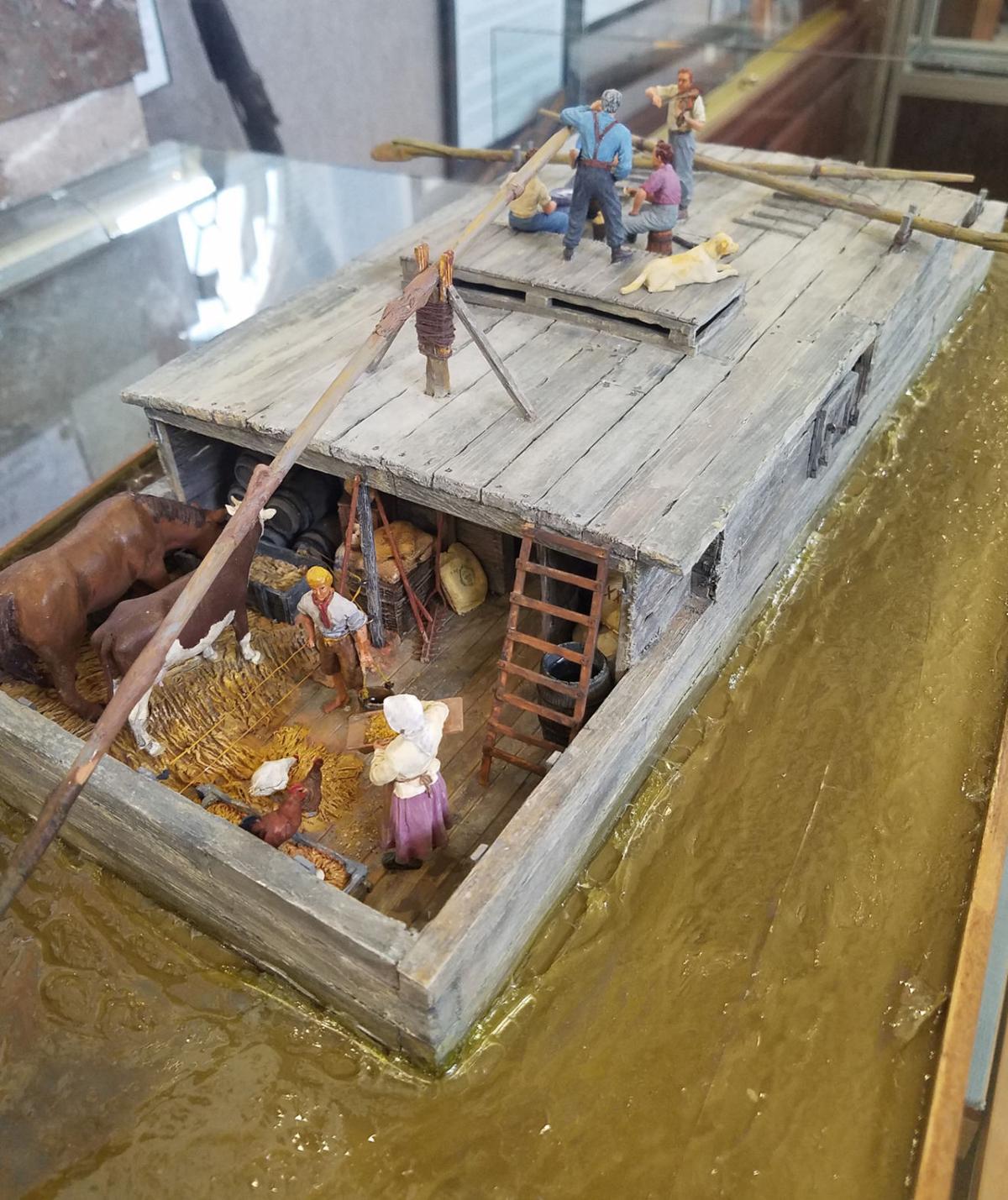 Kevin Kristen is an Army veteran who donates many hours to the Hardin County History Museum.

Kevin Kristen, a long-time volunteer at the Hardin County History Museum, displays a flatboat model he made for an exhibit.

Keven Kristen explains a flatboat model he created for display at the Hardin County History Museum.

A model Kevin Kristen made for the Hardin County History Museum. It took years to create the finished piece.

Originally from Miami, Kristen, 62, of Rineyville, flew planes with airlines and then had odd jobs before joining the U.S. Army at age 28.

Beginning a military career at that age meant basic training was a physical challenge, he said. But it also gave him the mental maturity to understand what superiors were trying to accomplish during basic, he said.

He went to Army flight school and flew Cobra gunships while sta­tion­ed in Korea. He later was stationed in Colorado where he met his wife, Sallie, who was vacationing from her home in England.

He left the Army but didn’t like it and heard about the Apache helicopter unit on Fort Knox. He went in as a traditional reservist in 1993 and in 1996 was picked up for full-time reserves.

“I didn’t look back,” he said of his 13-year career flying Apaches.

He flew the Apache in Bosnia and Iraq. He described the Apache as a helicopter with brute power.

“You could dance that thing around the sky like a little angel,” he said. “But at the same time, it has an intimidation factor, you couldn’t beat.”

In Bosnia, sometimes all they had to do is show up with the Apache and opposition would give up, he said. He escorted ground convoys in Iraq.

After Iraq, he served as an Army career manager in St. Louis before coming back to Fort Knox to work with Human Resource Command and the 11th Aviation Command.

He now is retired and spends a lot of his time volunteering at the museum and performing as a Union soldier in the Charles W. Logsdon Historic Downtown Walking Tour, which is conducted during Thursday nights throughout the summer.

His dad, Cal Kristen, who he described as his hero, introduced him to flying and also sparked his interest in history. He was a pilot and served in World War II. Kristen said he always enjoyed hearing his stories as he grew up.

When the family went on vacation, his dad always would take him to see something historically significant.

“I never lost that interest,” he said.

As he got older, he enjoyed researching history. He described himself as the “unofficial in-house archaeologist” at the Hardin County History Museum.

It’s a lot like the show “Antique Roadshow,” he said. People donate items and he researches those pieces to find the story behind them. He’s discovered several connected to events of historical significance.

“I enjoy digging into history and looking for references,” he said.

Museums, he said, should tell stories.

“It’s a fine line between being a repository for historical artifacts but also telling people why it’s important,” he said.

Museum board member Elvin Smith Jr. noted Kristen has worked on several displays at the museum. One is a display of items he donated from his tour in Iraq.

“He works with models, like the one on display about the flatboats that started the town of West Point,” Smith said. “He likes to work with the military displays thinking of ideas to improve our displays.”

“I still remember my first model,” he said.

It was a jet he said he painted an awful blue color.

Now, most of his work he designs himself. He creates a lot of vignettes for his children of things they are interested in.

Model building takes a lot of patience, he said. He has a three mistake rule. After three mistakes, he’ll walk away from the project and come back to it later so the work doesn’t become frustrating.

He said he feels busier in retirement than when he was employed. A lot of his time is spent at the museum at the corner of West Dixie Avenue and Mulberry Street. He’s been with it since the beginning but had to leave for various Army assignments and it took a while to get back to it but said he loves how it’s grown.

“I like the involvement people have here,” he said. “It’s an all-volunteer museum at this size which is impressive.”