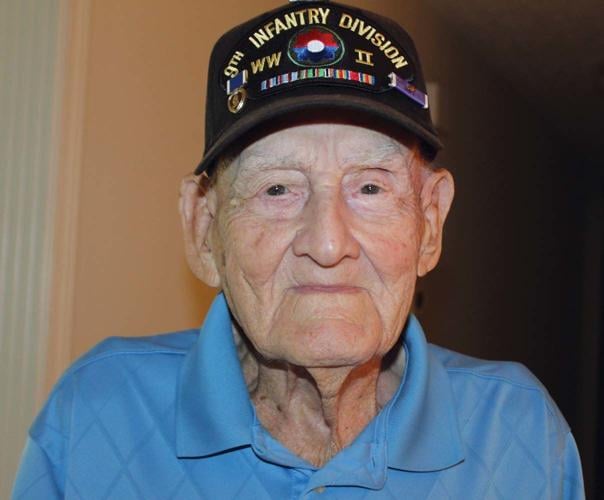 Vernon Deckard, a World War II veteran and Purple Heart recipient, talks Monday afternoon about his time in the war. 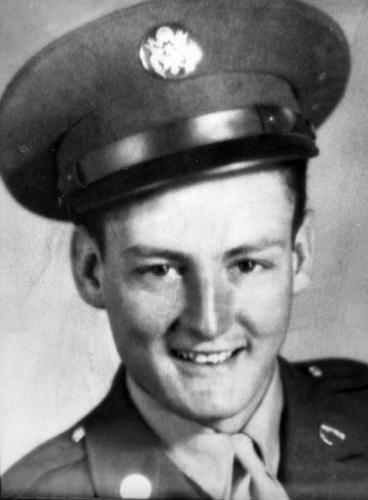 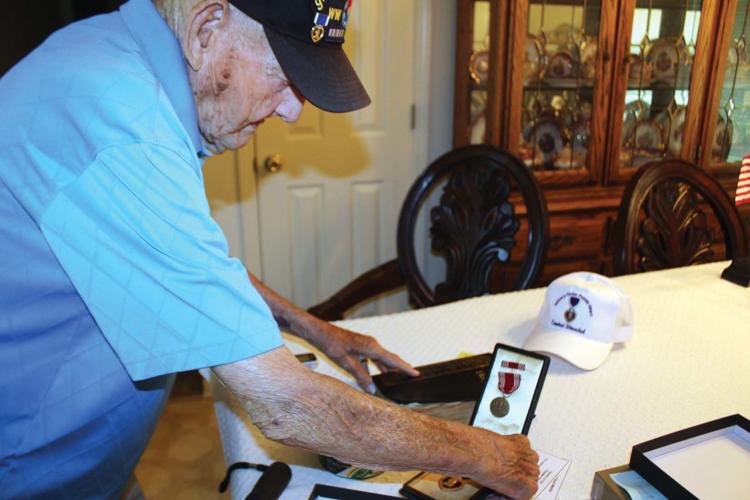 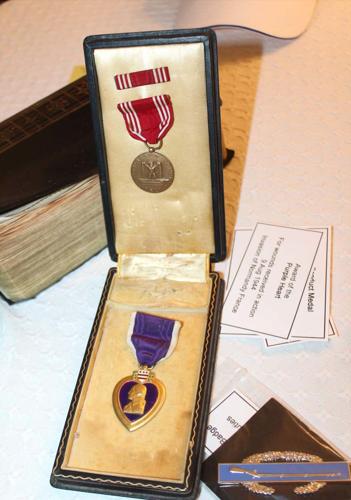 Vernon Deckard’s Purple Heart was awarded to him after he was wounded in World War II in August of 1944. 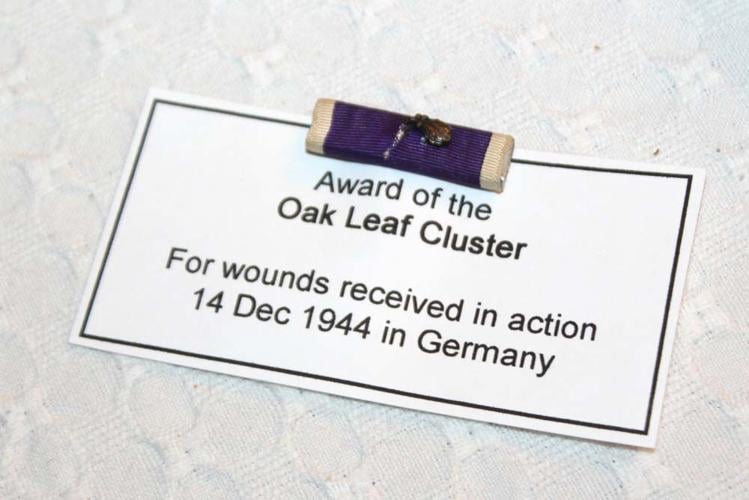 Vernon Deckard was awarded the Oak Leaf Cluster after being wounded in action in December of 1944. 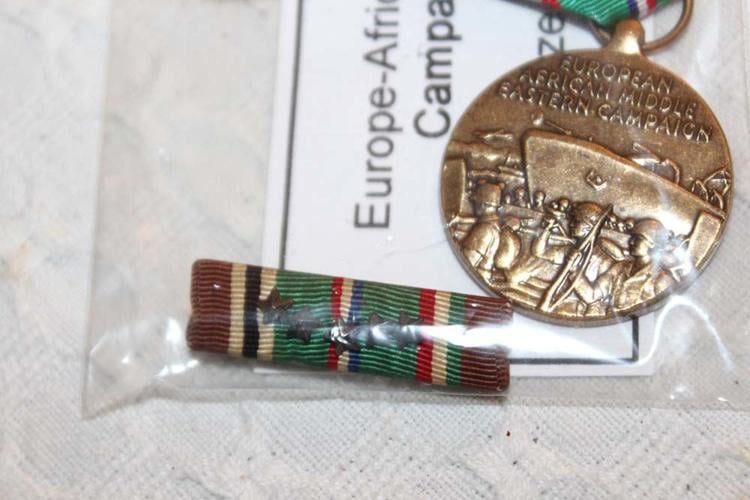 Vernon Deckard has a metal and ribbon with five battle stars for serving in the European, African, Middle Eastern Campaign.

Vernon Deckard, a World War II veteran and Purple Heart recipient, talks Monday afternoon about his time in the war.

Vernon Deckard’s Purple Heart was awarded to him after he was wounded in World War II in August of 1944.

Vernon Deckard was awarded the Oak Leaf Cluster after being wounded in action in December of 1944.

Vernon Deckard has a metal and ribbon with five battle stars for serving in the European, African, Middle Eastern Campaign.

Vernon Deckard, 96, has lived within about four miles of Radcliff all his life, except for the two years he served in World War II.

He started his service in the U.S. Army in 1943 at 18 years old and landed into the war in Glasgow, Scotland, before being sent to the front lines in France. He was placed in the 9th Infantry Division as a rifleman.

“So all I had to defend myself was a rifle,” he said.

Deckard said he went on attacks every day in Normandy while in France and served in the Battle of the Bulge. He was supposed to have a desk job, but he wound up on the front lines.

On his first day, he was a replacement for someone who got hurt or killed. While taking a hill with is buddy, they came upon fire.

“You never met a stranger in the Army, everyone you met were friends,” he said.

There were two tanks on the right side and Germans started attacking those tanks. He told his buddy they needed to get away from the tanks. They went into a trench and crawled through it to get up the hill.

“I crawled over one guy who had been shot right between the eyes, and I crawled over a few more before we got out of that trench,” he said. “I made it that day, and it was my first day.”

Deckard also remembers a day he could hear Germans talking and suddenly a machine gun began to fire. He fell to the ground for cover.

“My buddy was out in the middle of the road and you could hear the bullets hitting him,” he said.

Another time German forces chased them into a church. He heard a German say, “GI’s come out with your hands up, we know you’re in there.”

Deckard told the other soldiers they needed to stay where they were, because if they opened the door the Germans would “blow them down.”

“I opened the door and about 75 feet to my right was a German tank on fire and looked over to my left and there was another German tank,” he said.

The Germans had them in a crossfire, but his outfit had come up behind them and knocked out the two tanks.

Deckard was wounded in action and awarded a Purple Heart and the Oak Leaf Cluster.

The first time he was wounded was during hedge row fighting when he was shot in the hip and arm. The hip was just a flesh wound, but the other bullet hit the bone in his arm and splattered. The fragments still are in his arm today.

The second time was right as the Battle of the Bulge was starting. During some shelling, he went into the basement of a building and laid down on the floor.

After a few minutes he heard a “boom.”

“I woke up and there was nothing there but sky,” he said.

He remembers being put on a stretcher but remembers nothing else until he went to the hospital. This time he said he was wounded all over.

His daughter, Laura Tabor, said it amazes her when she hears his stories about how little food there was during battle. He told her one Thanksgiving they shot jackrabbits in Belgium for dinner.

Deckard remembers his mom sent him a fruitcake in December of 1943 and he didn’t get it until the next December.

Tabor said she’s also impressed he can remember a song the soldiers made up while waiting for their transport to come home from the war.

“Mr. President, won’t you send us home, we conquered Luxemburg and liberated Rome, we whipped the ass of the Nazi race and now they say no shipping space. Please send us home,” he sang.

After his service in the war was over he went to work at Fort Knox driving a truck. He also went to barber school on the GI Bill and barbered for about 10 years.

After he was done barbering, he started selling carpet. He sold his barber shop and built a carpet shop. Today, his two sons Tim and Greg run Vernon’s Carpet in Radcliff.

Until this year, he still mowed his yard. But he still gets on his mower and touches up places in the yard and uses it to check his mail and haul his trash.

His age is finally catching up with him, Deckard said.

“He’s an amazing dad,” Tabor said. “We couldn’t ask for a better dad and he’s been there for all of us.”

Daughter Donna Alldaffer said when she thinks about her dad, she thinks of his simple view of life.

“Anything worth having is earned through hard work and honesty,” she said. “He is kind, patient and respectful to everyone.”

Alldaffer called him forgiving and not one to have angry words with others, teaching by example.

“I love him for the father he is and for the values he has instilled in me,” she said.

Getting to know Vernon Deckard

Getting to know Vernon Deckard:

Hobbies: He used to enjoy fishing, hunting and playing sports.