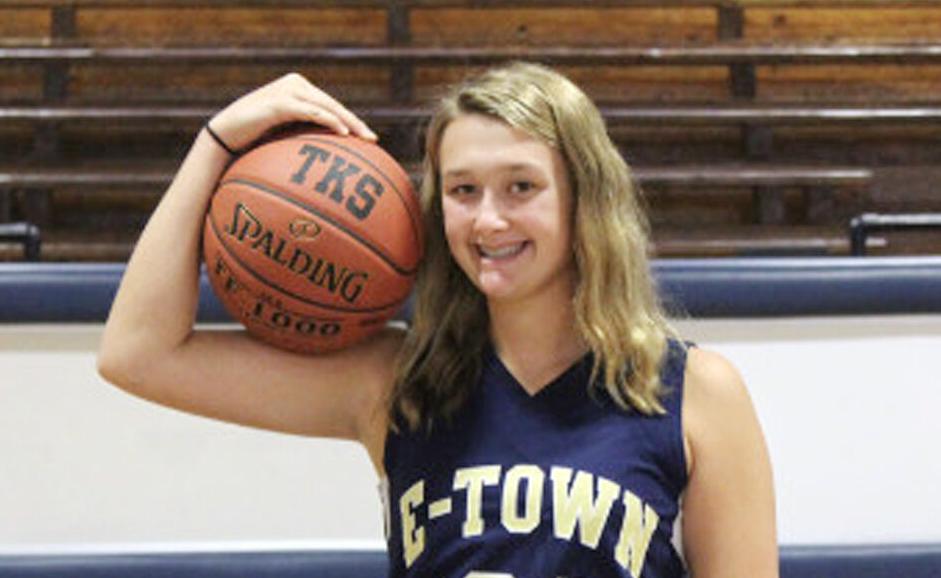 Leah Macy has a passion for basketball and plays on multiple teams. 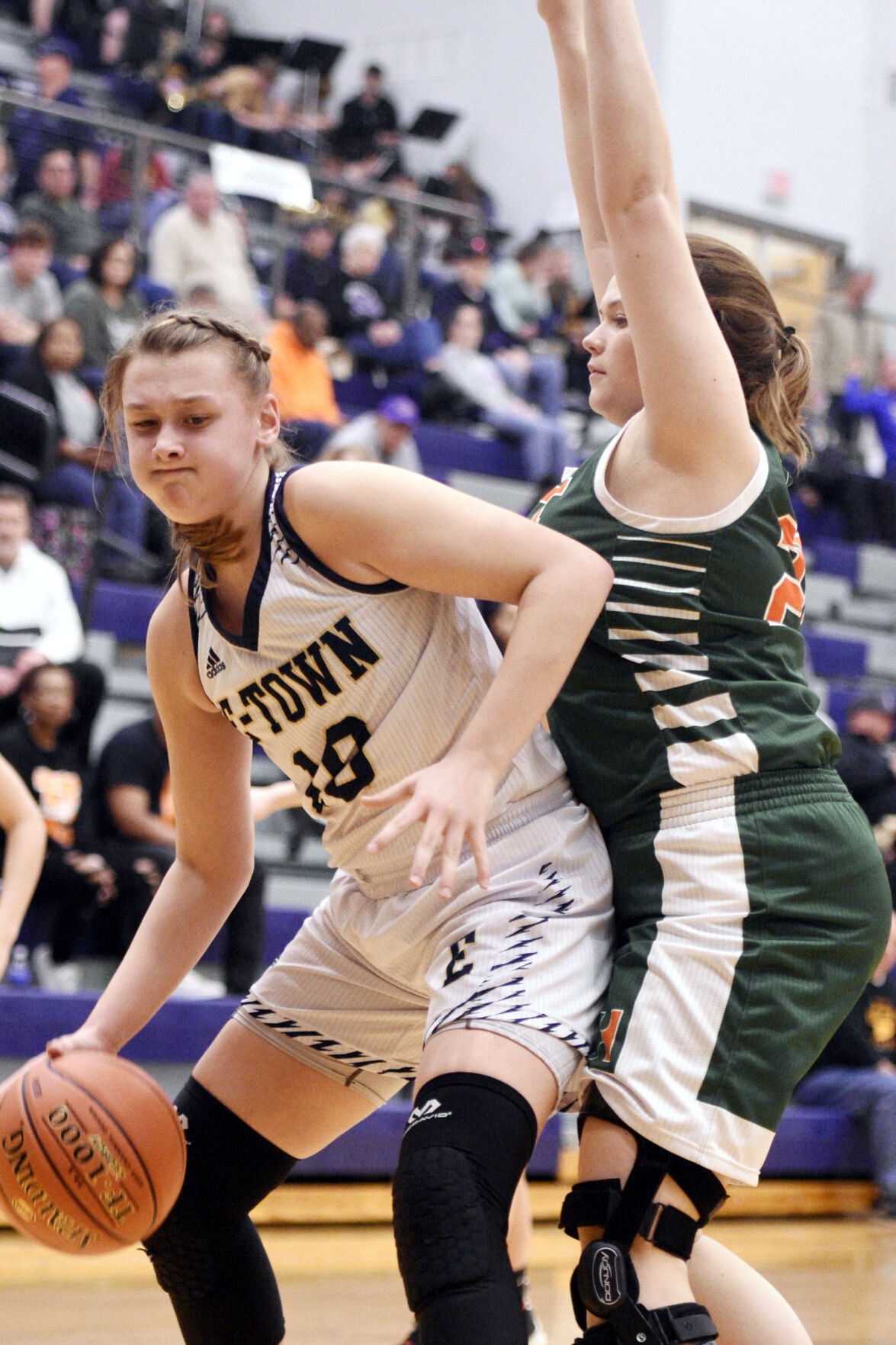 Elizabethtown seventh-grader Leah Macy drives to the basket against Hart County’s Katie Heath during a victory over the Lady Raiders at Thomas Nelson in the 5th Region Tournament quarterfinals. Macy finished with nine points and four rebounds as the Lady Panthers won their 25th game of the season. 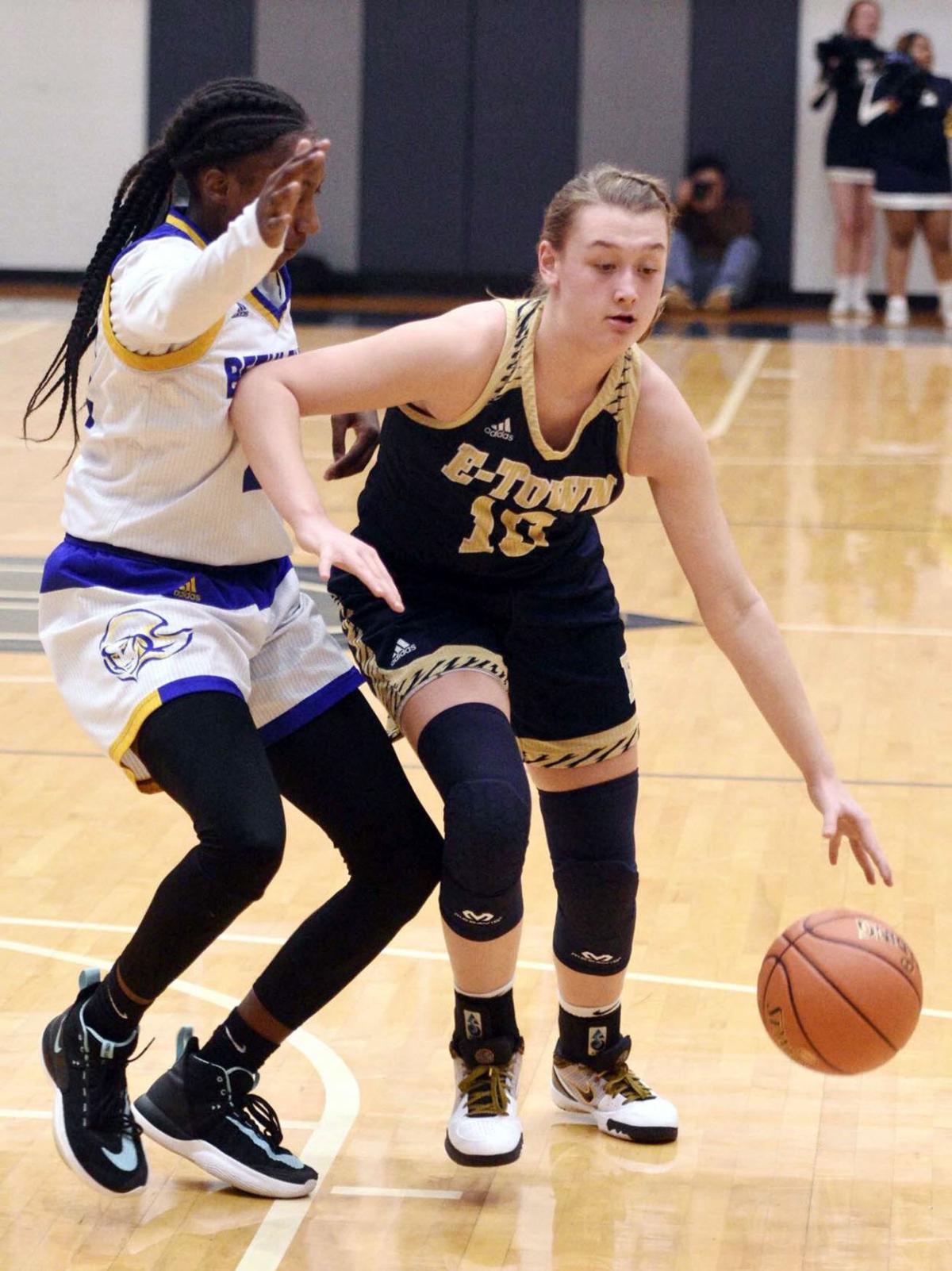 Leah Macy looks to push past Bethlehem’s Mikiah Livers-Bryant. Macy is a seventh-grade player for the Lady Panthers. 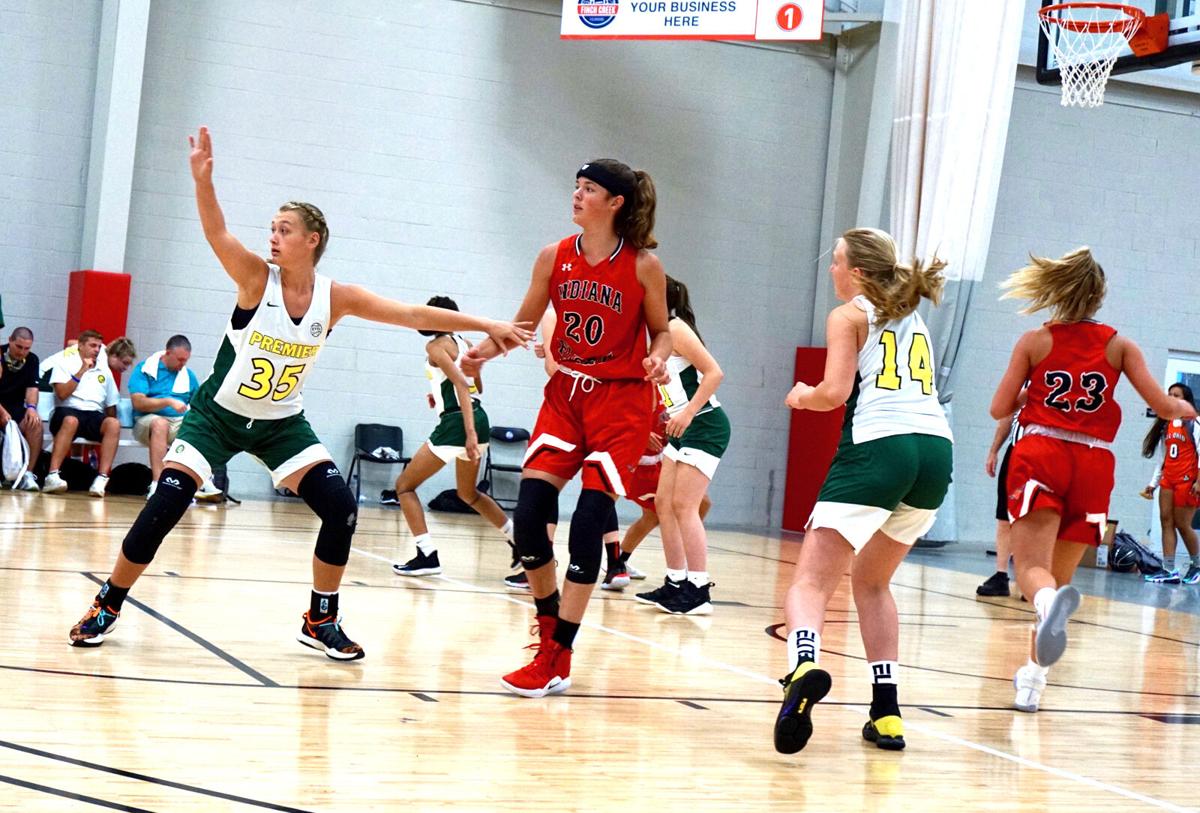 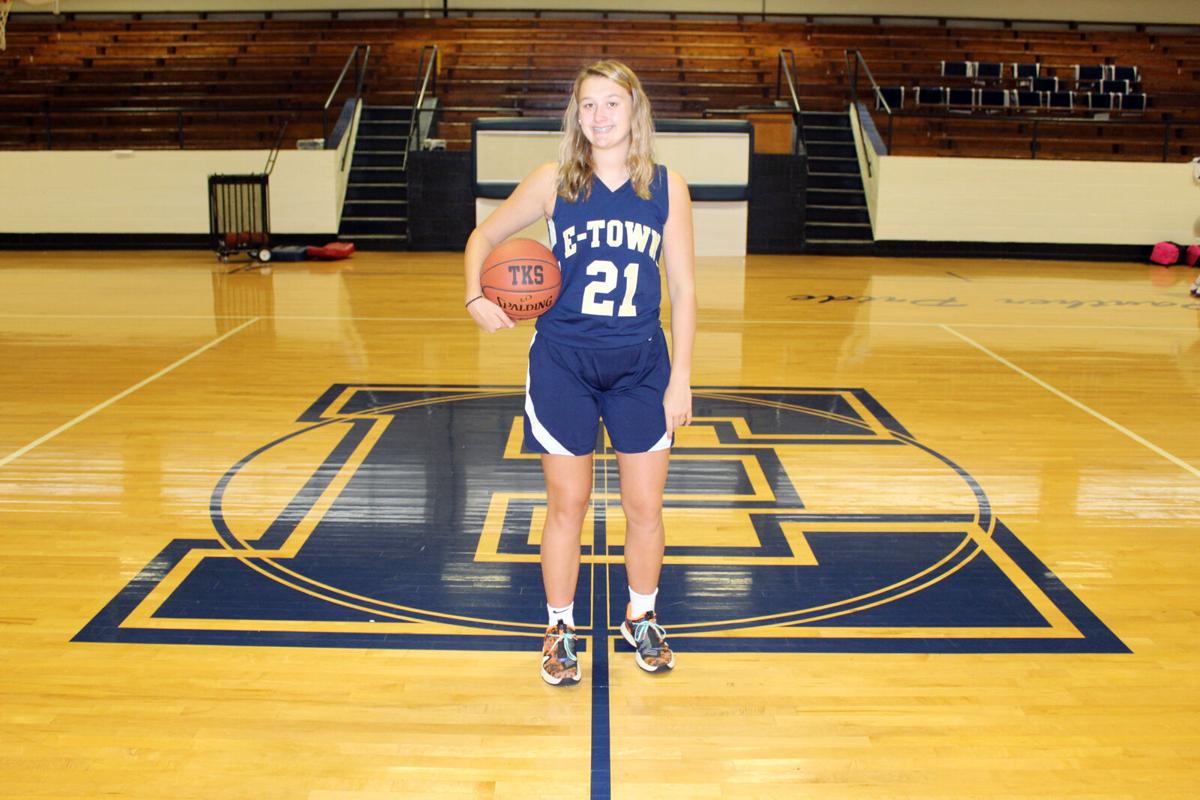 Leah Macy plays for T.K. Stone Middle School, Elizabethtown High School and other basketball teams as she continually strives to improve her game.

Leah Macy has a passion for basketball and plays on multiple teams.

Elizabethtown seventh-grader Leah Macy drives to the basket against Hart County’s Katie Heath during a victory over the Lady Raiders at Thomas Nelson in the 5th Region Tournament quarterfinals. Macy finished with nine points and four rebounds as the Lady Panthers won their 25th game of the season.

Leah Macy looks to push past Bethlehem’s Mikiah Livers-Bryant. Macy is a seventh-grade player for the Lady Panthers.

Leah Macy plays for T.K. Stone Middle School, Elizabethtown High School and other basketball teams as she continually strives to improve her game.

Leah Macy focuses on giving back and giving it all in her basketball career.

Prior to the COVID-19 pandemic, the T.K. Stone Middle School student volunteered in a classroom with children who have special needs.

“I enjoy the interactions with the students and I think it is great for them to interact with someone their age,” the eighth-grader said. “I have gained an appreciation for all of the things these students must overcome, but also learned that they are able to do things like me, just in a different way.”

The 13-year-old also is involved in her church youth group. Before COVID, she didn’t have time to be as involved because she often was out of town at tournaments. She began watching Southeast Christian Church online.

“During COVID, I have had a lot more downtime and used that time to strengthen my faith by watching church online and participating in youth group activities online,” she said.

But basketball takes up most of her time. She first fell in love with the game when she was in kindergarten and went to the Lady Panther Basketball Camp, where she met the high school players she admired.

“I would beg my parents to take me to games and make them stay afterward so I could say hi to the players,” Macy said. “They were all so nice to me and would help me and show me how to shoot or dribble.”

She dreamed about the day she would be a high school player.

In third grade, she tried out for an AAU travel team called Ken­tucky Premier. Based in Bards­town, the team had players from many counties and played in tournaments all over Kentucky, she said.

“It was my first time playing with girls at a higher level and in a more competitive environment,” she said. “I feel that taking the step to play with this group helped me see what I needed to do to develop as a player and what other girls were doing across the state.”

While she was at tournaments, she’d pay attention to more advanced players to see what she needed to do further her game

“I feel like I have to always be learning and growing my game,” she said.

“It was amazing to finally be a Lady Panther just like the girls I looked up to as a kindergartener,” she said. “I learned so much from the older girls on the team and they really were patient with me and always asked me if I needed anything.”

“As for basketball, she understands the game much better than girls her age and even better than some upperclassmen,” Swiney said. “She wants to be the best and her drive and determination will take her a long, long way.”

Pfeiffer said Macy doesn’t let the pressure of big games get to her. She is the type that wants to be coached and improve.

“That’s rare for a kid her age,” he said. “She also knows when to take things seriously and knows how to keep things fun and make everyone – teammates and coaches – laugh.”

Macy’s best memory with the Elizabethtown program was winning the 5th Region Tournament and cutting down the net. There was a police escort leading them back to the school and she saw many fans honking at the bus.

“I look forward to doing that again,” she said.

When COVID hit, she had just finished eight months of basketball. Over the next month, she realized AAU season wasn’t going to happen. To stay fit, she continued CrossFit training and her dad set up a home gym for weight training and cardio workouts.

In June, her AAU team went to a tournament in Indianapolis. But she was nervous. Her great-uncle had died of COIVD in April and this would be the first place her family traveled since the shutdowns. There were many precautions at the tournament but as for the game, she said it felt normal.

Then in July, she had another setback when three teammates tested positive for COVID and she had to quarantine for two weeks. She was fortunate and did not catch the virus. She was asked to play in a few more tournaments but declined because she didn’t want to risk exposure again.

“That was a very hard decision for me because I knew other players may move ahead of me in basketball exposure, but I felt that the health and safety of my family was too important,” she said.

“She is not afraid to get out of her comfort zone and try new experiences,” he said. “Her future is bright.”

Now, her eighth-grade season has begun at TK Stone and she said it feels good to be back on the court, in uniform with her teammates.

In August, she was named a BlueStar 30 and will travel to Tampa later this month for an elite camp with some of the nations top players in her class. It’s an invitation only camp that trains players on skills they will need to play at the national level, she said.

“I am really looking forward to meeting players from all over the country and learning and competing with them,” she said. “This was a huge goal of mine and after I chose to sit out some tournaments, I thought I wouldn’t be selected”

She thought she had fallen off the radar but was excited to find out she was invited to the camp.

Her mom, Stephanie Macy, admires her daughter’s ability to know what she wants and find ways to make it happen.

“She is extremely competitive in everything she does, but she has this quiet, humble way about her,” she said. “She respects the players, coaches and teams that she goes against and receives so much support back because they respect her in return.”

Her mom is most proud that at 13, her daughter balances academics and athletics well.

“She often misses out on social events because of practice, a workout or games, but she never complains,” she said. “She realizes all of her hard work will eventually pay off.”