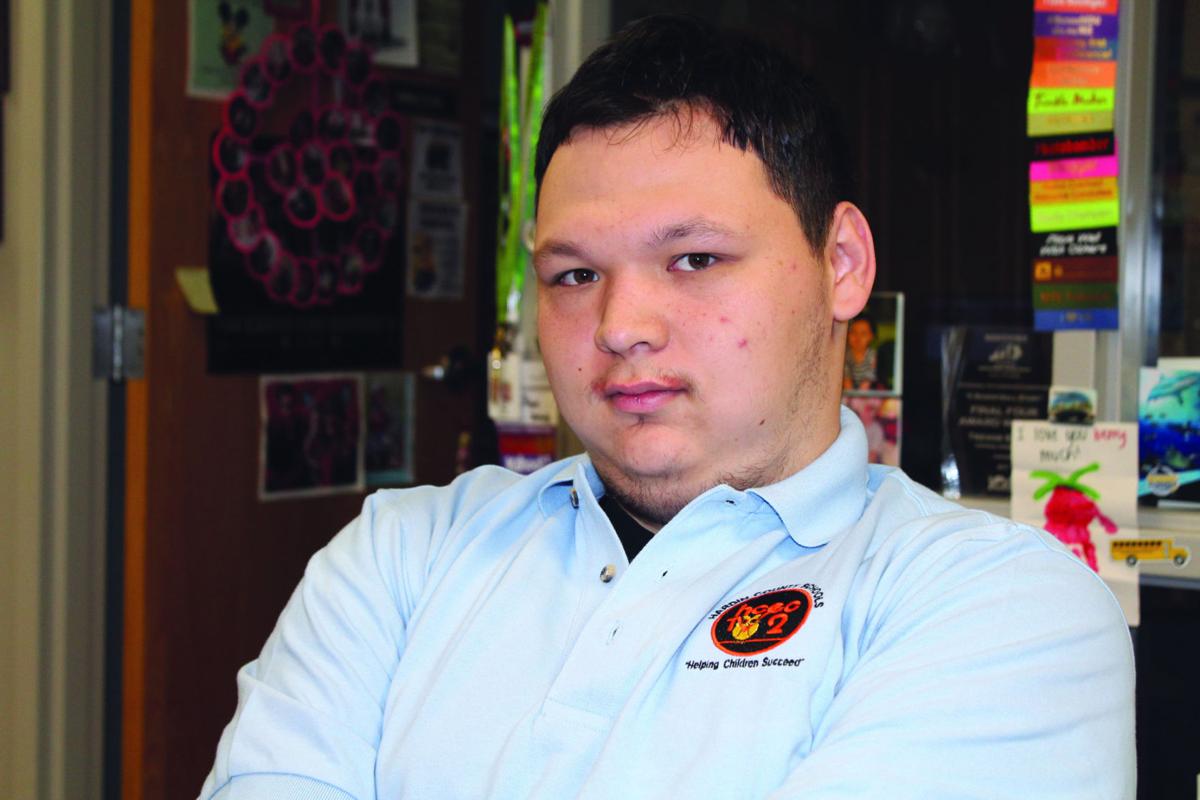 Noah Miller is a student production assistant for HCEC-TV. 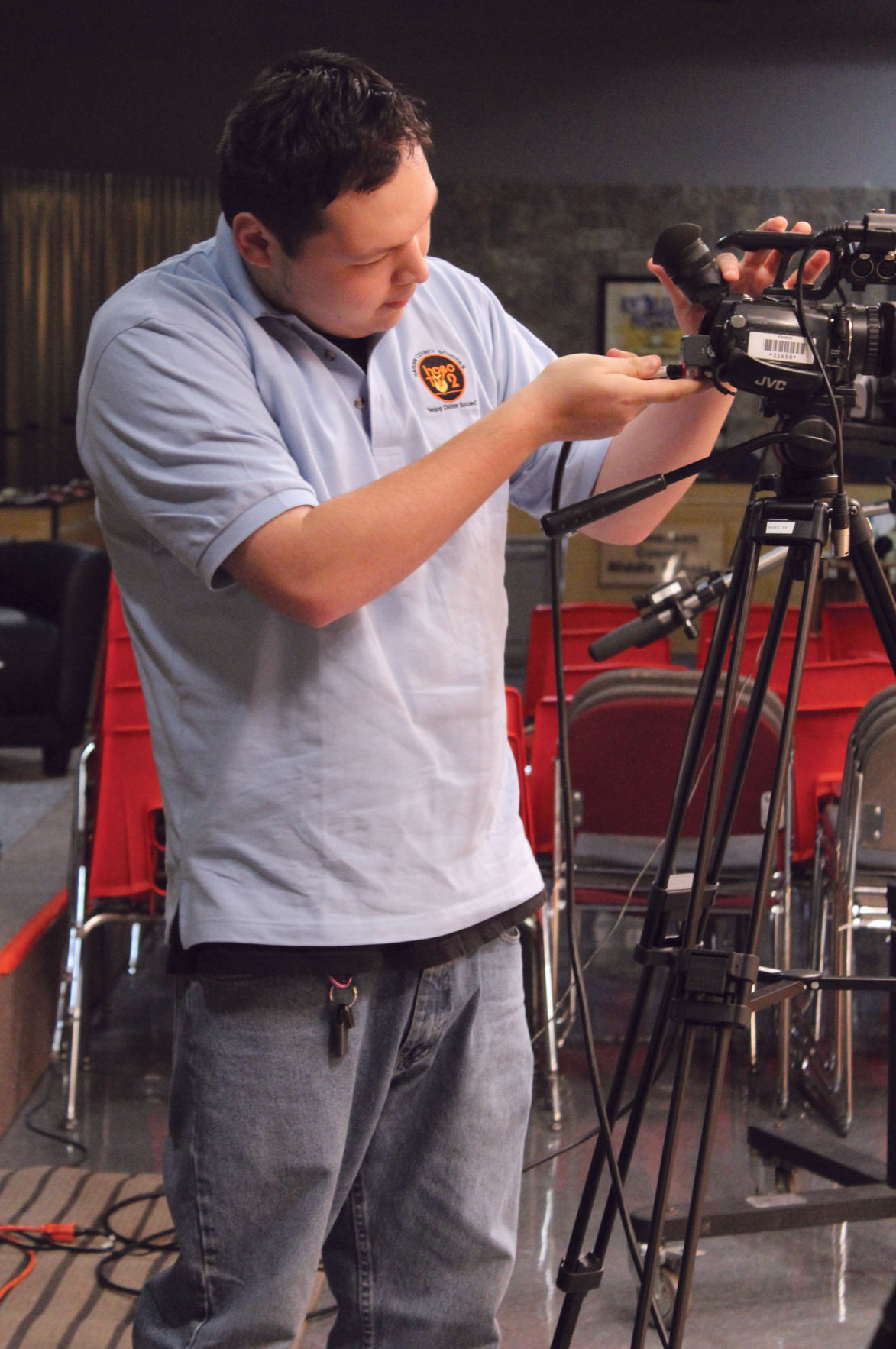 Noah Miller prepares a camera for taping a talk show at the HCEC-TV studio. 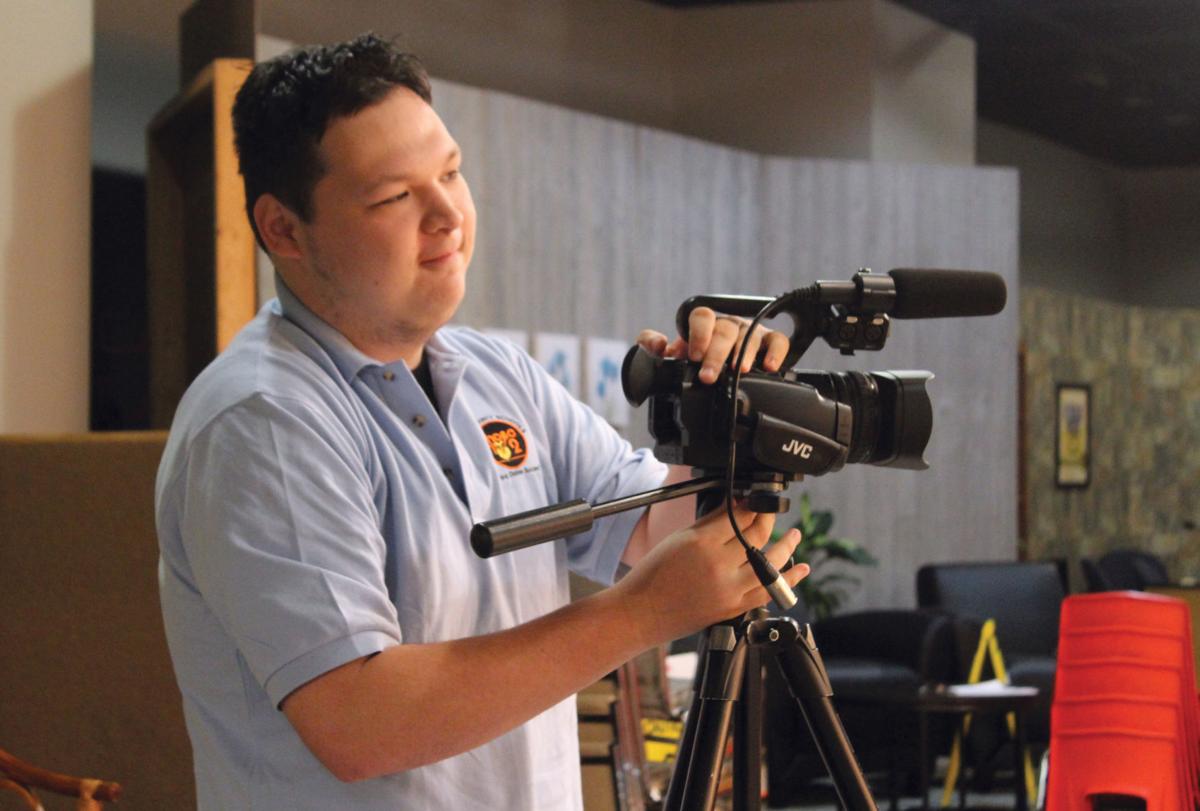 Noah Miller prepares a camera for filming a talk show at HCEC-TV. 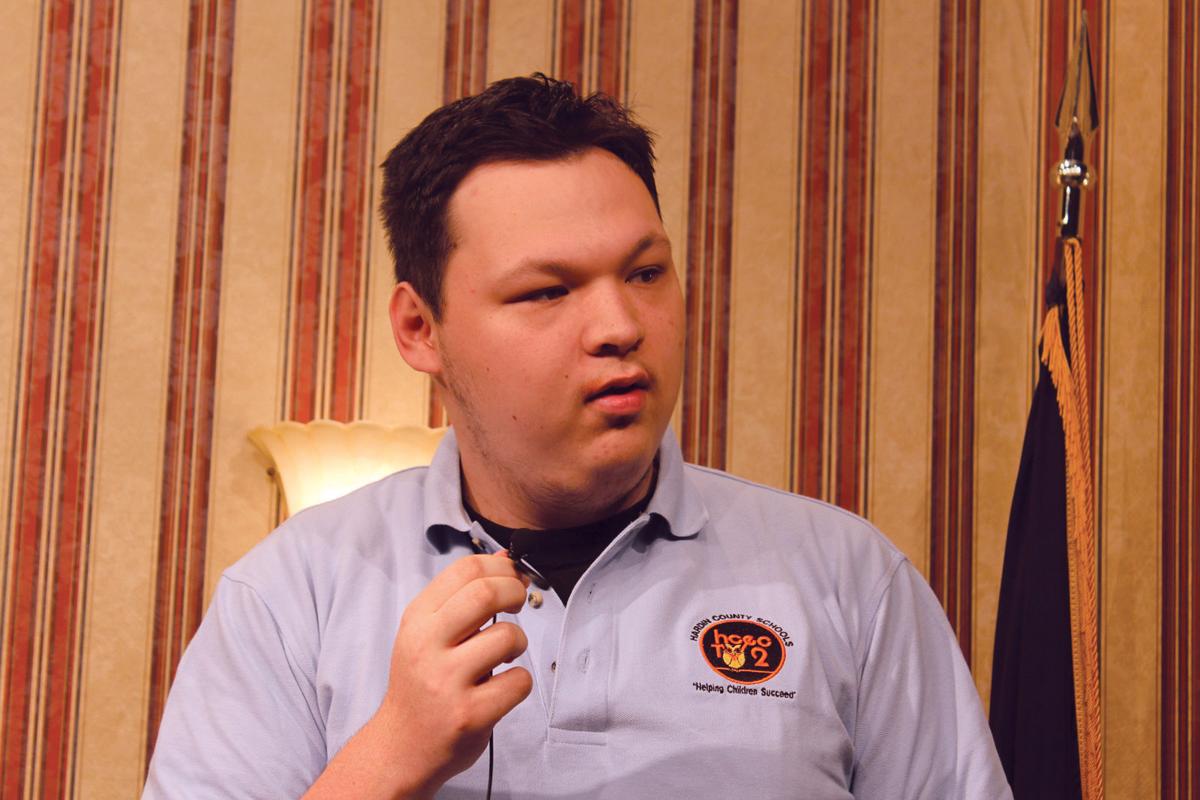 Noah Miller does a microphone check before filming a talk show at HCEC-TV. 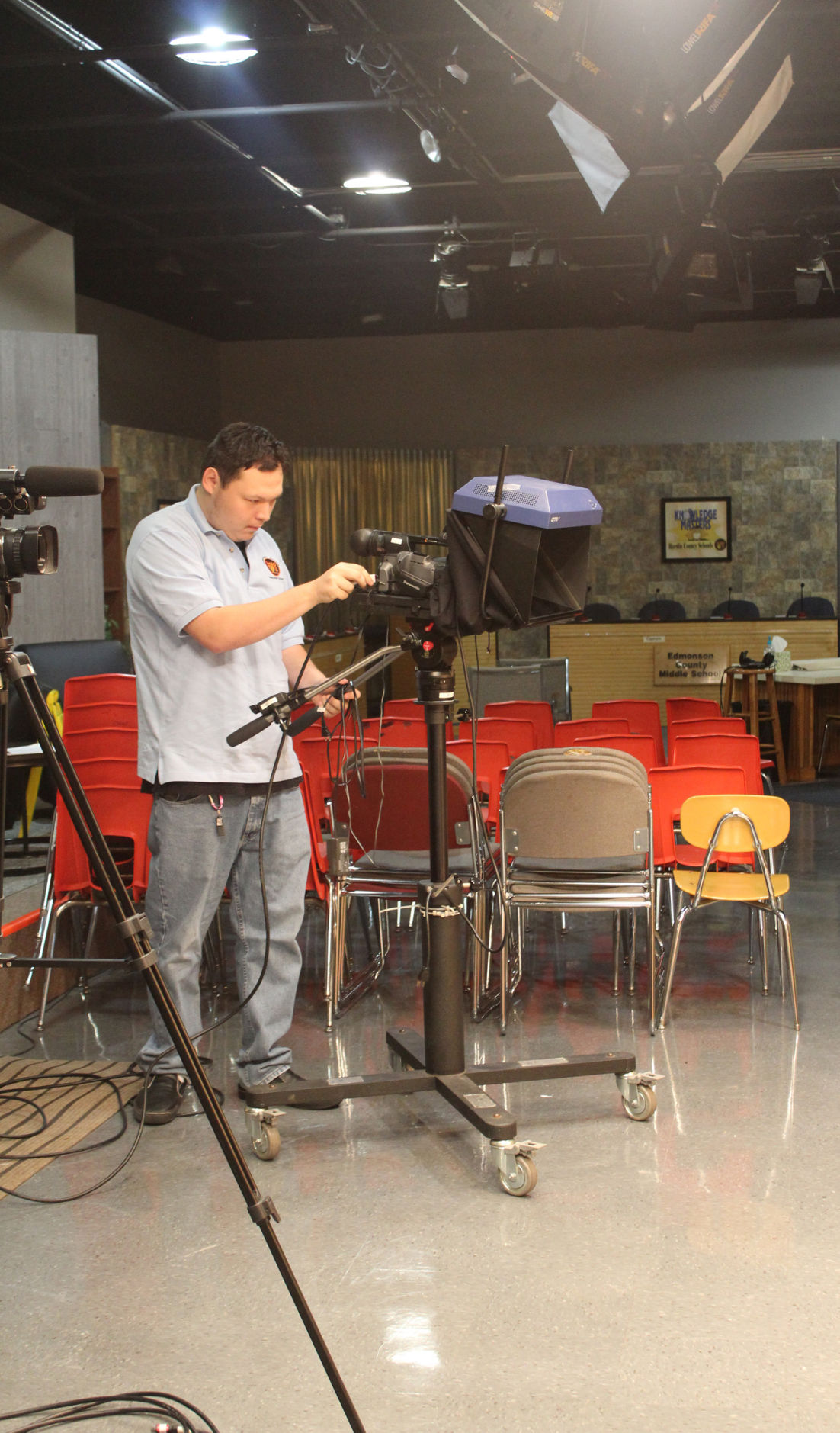 Noah Miller preps a camera as a part of his job as a student production assistant at HCEC-TV.

Noah Miller is a student production assistant for HCEC-TV.

Noah Miller prepares a camera for taping a talk show at the HCEC-TV studio.

Noah Miller prepares a camera for filming a talk show at HCEC-TV.

Noah Miller does a microphone check before filming a talk show at HCEC-TV.

Noah Miller preps a camera as a part of his job as a student production assistant at HCEC-TV.

Noah Miller, 19, of Radcliff, is doing something he didn’t know he could do a year ago. He’s a student production assistant at HCEC-TV.

What’s unique about his placement is he’s a year-14 low-incidence student from John Hardin High School. As far as his teacher Vicki Pitcher knows, he’s the first low-incidence student to be in a position at HCEC-TV. She described low-incidence as functional mentally disabled with an IQ lower than 50. This can influence memory, cognitive functioning and learning styles.

As a year-14 student, he has graduated but takes one class at John Hardin and then works at HCEC-TV. He remains in the school system for progress monitoring and to take elective classes, Pitcher said. He will age out of the system when he turns 21, she said.

Miller is on the technology career pathway and hopes to permanently be employed by Hardin County Schools at the television station and in technology one day.

Since the beginning of the school year, Miller has helped edit videos, work the camera and anything else that needs to be done around the studio.

Miller said he discovered he really liked it.

He was very involved during recent election coverage.

“It was exciting and tiring,” he said.

When he tapes sporting events, Miller said he is positioned really high, above the press box.

When he came into the HCEC-TV building the first time and they asked him to edit something, he thought “What have I gotten myself into?”

He said sometimes he needs to be put in the right direction but most of the time he has an idea of what to do. At HCEC-TV he said he found a comfortable space, where he belongs.

Gina Ryan, director of tele­vision production, said Miller visited the studio on a field trip. His job coach, Karen McCord, contacted her to let her know he had an interest in production.

“Karen and I discussed a co-op and I suggested he attend the Media Arts Summer School program,” she said.

After that, Miller wanted to do the co-op at the studio.

“Noah began his internship at the studio about the middle of August and he easily became a valued member of our team,” she said.

“Noah was tasked to tape interviews with our HCS stu­dent-athletes and to use high­lights from HCEC-TV sporting events to share their stories,” she said. “With guidance, Noah has done a very good job of creating features highlighting these athletes and these segments have aired prior to HCEC-TV live sports broadcasts.”

She called Miller a key member of the team.

“Through direction and modeling, Noah assists in so many ways that benefits the mission of HCEC-TV,” she said. “Noah sets up the studio sets, the cameras, the microphones and any special presentation of the guests, and he has computer skills that keeps the production on track.”

She said he loves technology and is a fan of Apple.

In the afternoons he works in the district’s technology department assisting with Chrome­book, laptop and computer repairs, Ryan said.

“Both HCEC-TV and the technology department have really appreciated Noah’s help in our departments,” she said. “He has mastered many skills that he has learned this first semester. “

Pitcher said Miller’s goal was to work for the school district in technology.

“We decided to give it a try because you don’t see many of our low-incidence students doing this type of position,” she said. “Gina gave him a chance, he’s doing very well and he’s proving he can do much more than people think.”

Five years ago, he walked into her classroom and was a little intimidating because he’s a big guy, Pitcher said. She soon learned he was a “gentle giant.”

He was a quiet kid and didn’t talk much but after the first year he came out of his shell and showed he could do anything with technology in our classroom, she said.

“For the last three years he’s been the tech guru in our classroom,” she said.

One of the class mottos is to push to the limit and then push farther.

“He has gone father than most people would have thought,” she said. “I’m very excited that he got out of his shell and he will have a future.”

Getting to know Noah Miller

Siblings: He has two brothers.

Hobbies: He just took a speaker unit apart to see how it worked.