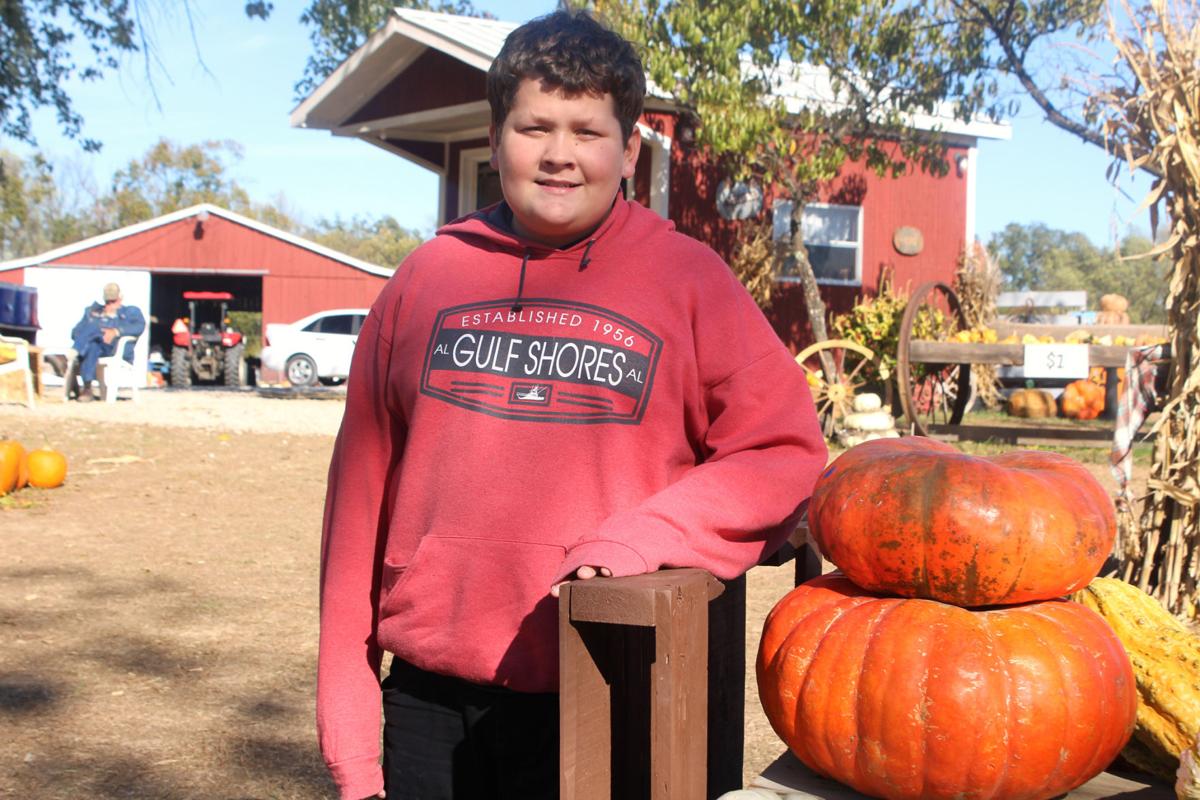 Brad Mink is a pumpkin expert at his family business, Mink and Walters Pumpkin Patch. 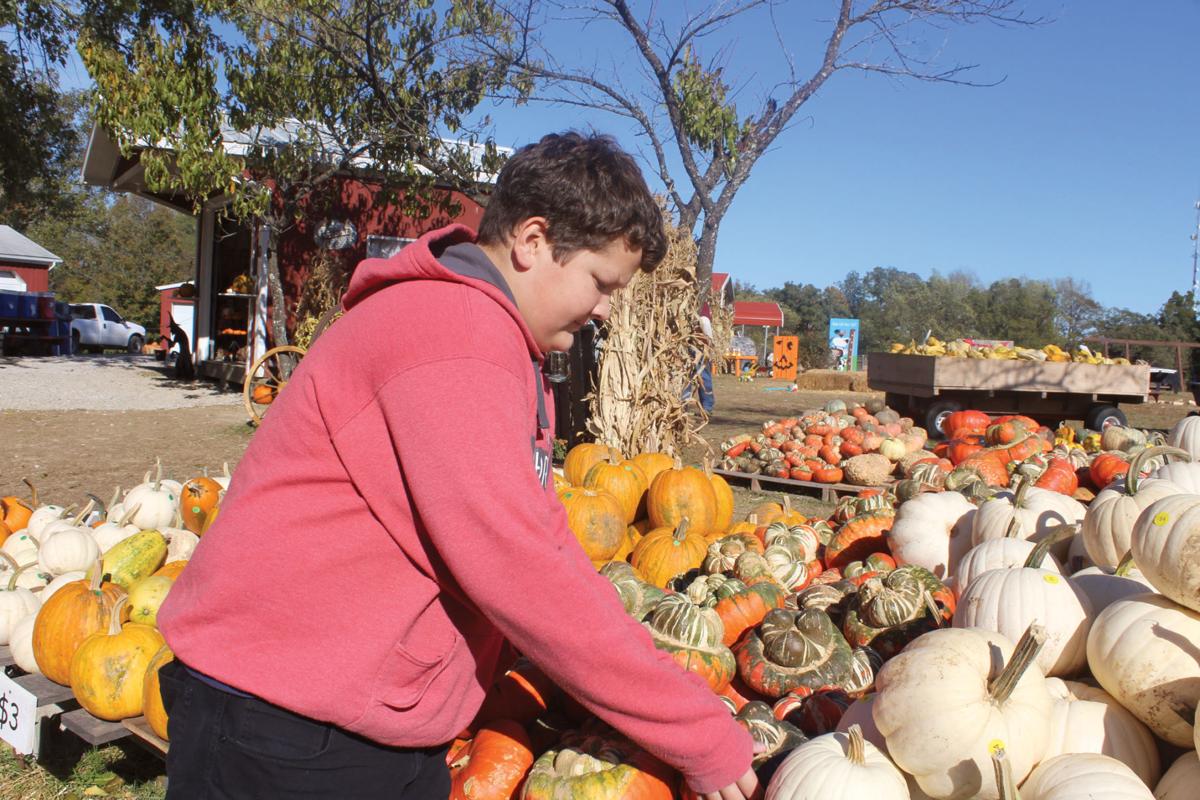 Brad Mink picks up a Turk’s Turban pumpkin at the Mink and Walters Pumpkin patch to describe how it differs from other pumpkins. 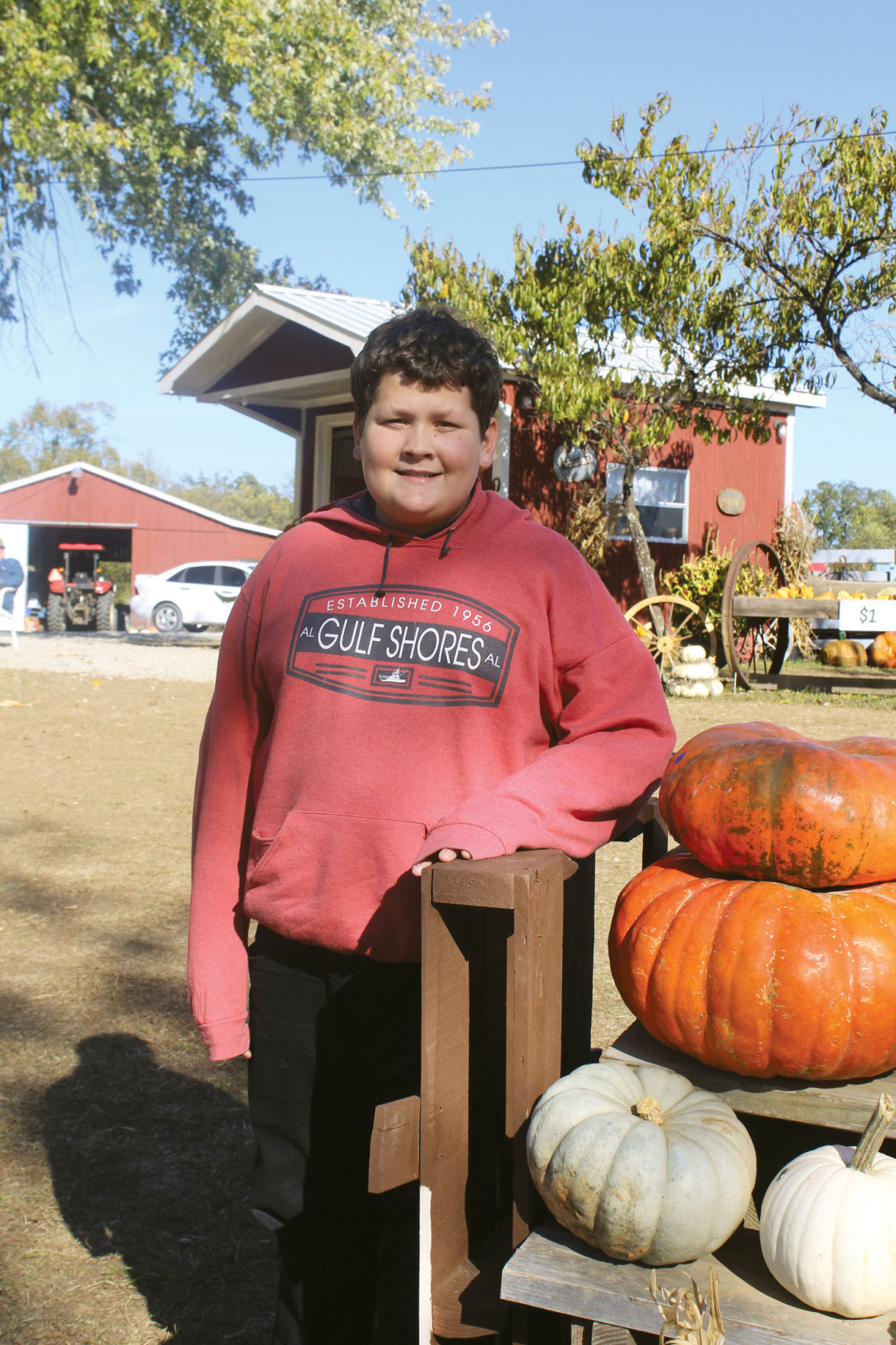 Brad Mink is a 13-year-old pump­kin expert at Mink and Walters Pumpkin Patch.

Brad Mink is a pumpkin expert at his family business, Mink and Walters Pumpkin Patch.

Brad Mink picks up a Turk’s Turban pumpkin at the Mink and Walters Pumpkin patch to describe how it differs from other pumpkins.

Brad Mink is a 13-year-old pump­kin expert at Mink and Walters Pumpkin Patch.

At Mink and Walters Pump­kin Patch in Elizabethtown, the pumpkin expert is 13-year-old Brad Mink.

The East Hardin Middle School eighth-grader has been working with pumpkins for a long time.

“I’ve been working here ever since I was born, actually,” he said.

He likes everything about the pumpkin business. It’s a year-round endeavor so he said he really doesn’t forget anything about it.

Mink is involved in the entire process including planting, picking and selling the pumpkins.

He really likes working the register and interacting with people, he said. Part of the reason he tries to learn so much about pumpkins is to inform the customers and to be able to answer any questions they might have.

“I like it when everyone comes out and has a good time,” he said.

Between the pumpkin patch and school, he doesn’t have much time for anything else in September, October and November.

His grandmother, Mary Ellen Mink, said she doesn’t know how he maintains all As in school while doing all he does at the pumpkin patch, adding many of her other grandchildren did the same.

“He’s a very intelligent young man and we really look forward to what he will become when he’s an adult,” she said.

Every year he researches pumpkins to stay informed and loves to ask questions and learn about other things, she said.

“He was born into pumpkin sales,” she said, adding he’s a very trustworthy young man.

While looking over some of the pumpkins loaded on a wagon, Mink described what makes them different.

Specialty pumpkins are an heirloom seed, he said. You take the seeds out and plant them and get the same pumpkin from the seed, he said.

Traditional orange or white pumpkins are different, he said. If you plant those seeds in the ground with those you get a completely different pumpkin.

Mink guesses the average consumer might not realize there’s so much to learn and know about pumpkins.

“He’s a hard worker and he’s very dedicated to this pumpkin patch,” she said. He’s also the family meteorologist, she said. He always knows what the weather will be including how much it will rain or how hot it will get, she said.

With all this pumpkin knowledge, one would think Mink might be looking to pumpkins for his future. But in school he loves math and science and has an interest in engineering.

At East Hardin, he’s a lead in group talent in Beta Club, competes with the robotics team and engineering club.

His grandfather, Harvey Mink, said he had nothing bad to say about Mink. He said one of his attributes is that you don’t have to tell him what to do, he just does it.

Getting to know Brad Mink