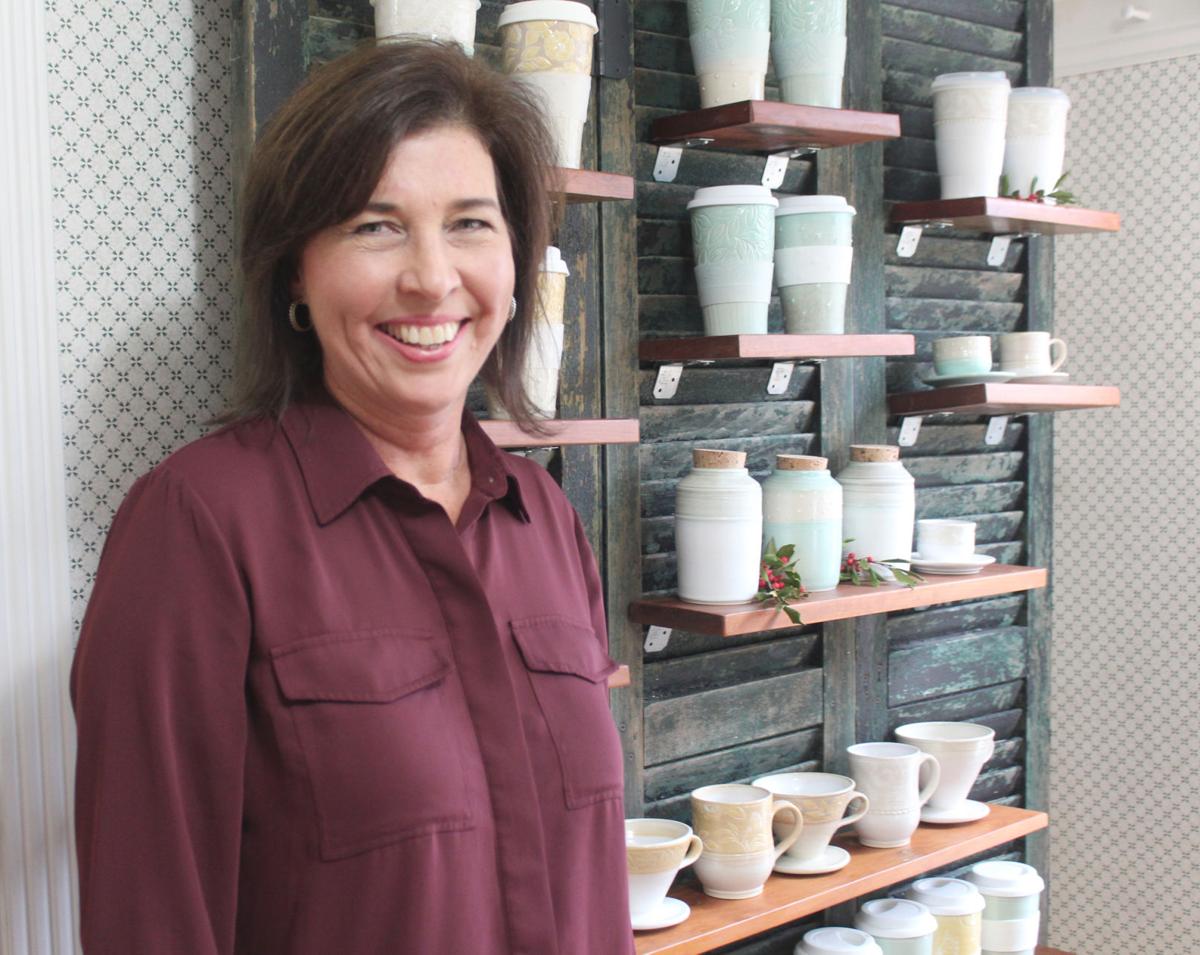 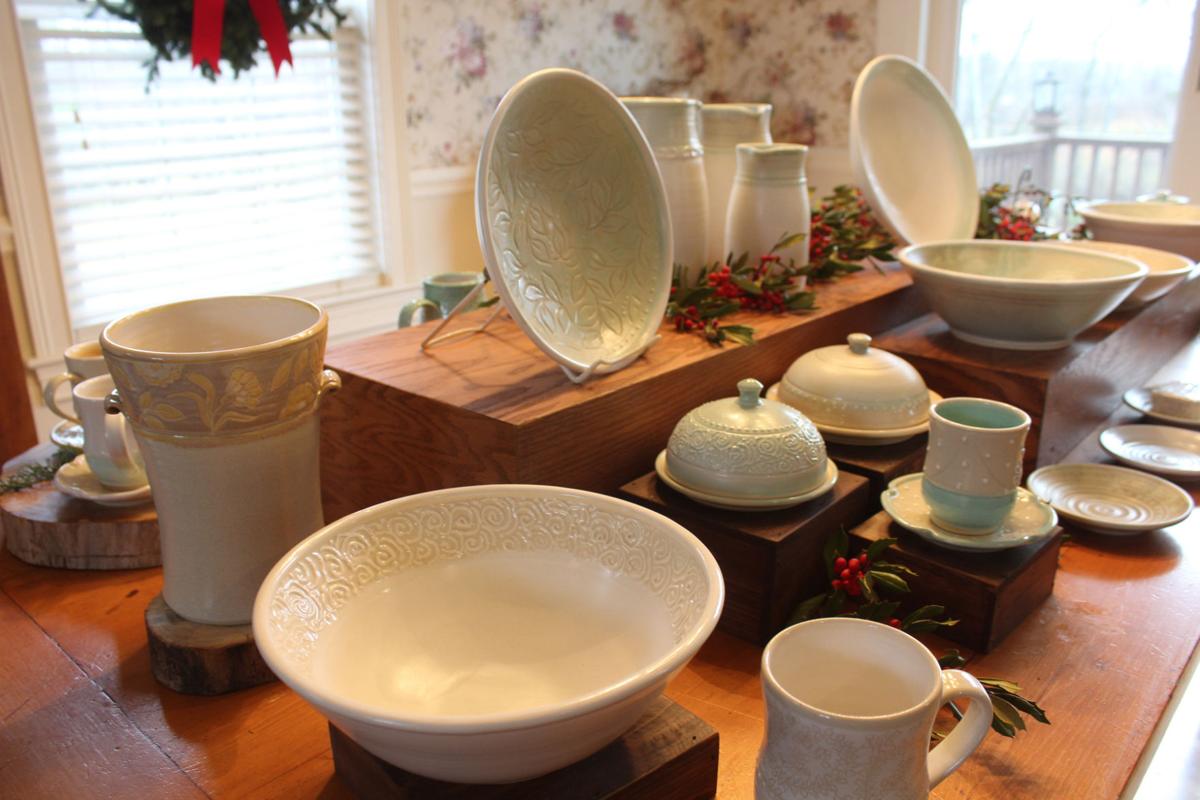 A selection of pieces created by Margaret Cooney, who regularly participates in regional art fairs and recently held an open house event at her Elizabethtown home. 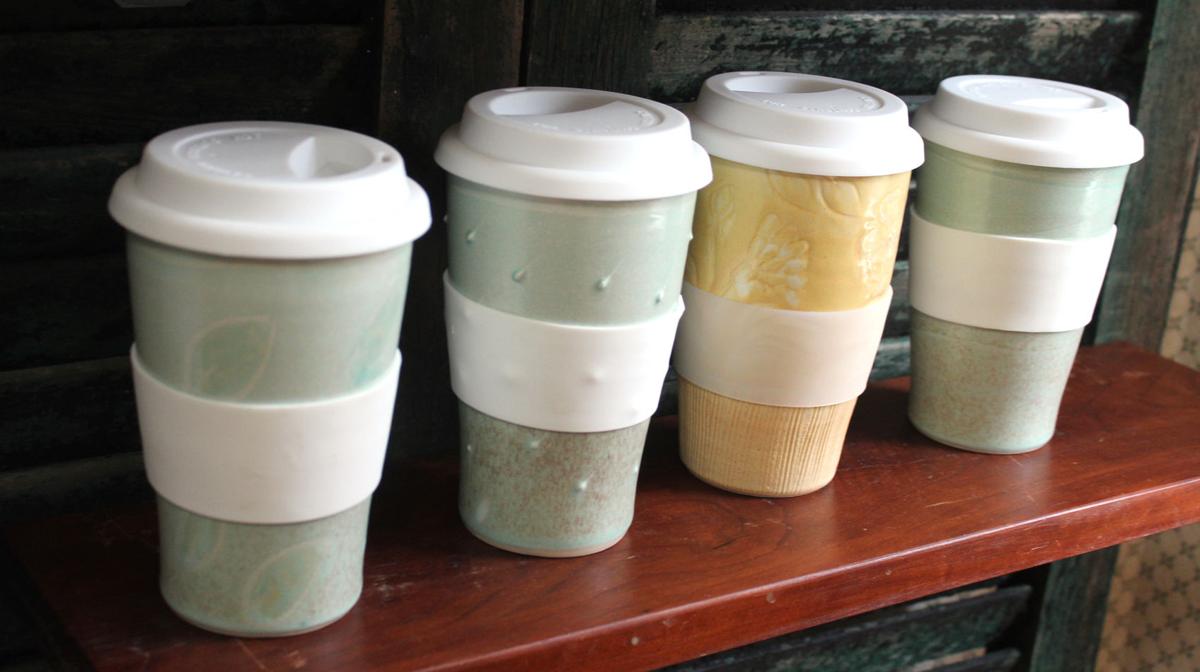 A selection of pieces created by Margaret Cooney, who regularly participates in regional art fairs and recently held an open house event at her Elizabethtown home.

Margaret Cooney of Eliz­abeth­town sat in her living room, analyzing the shining glaze of an empty ceramic teapot.

“Teapots are like the Mount Everest of the potter,” Cooney said while pointing out its floral design. “Everything has to work together. The form, the shape. It has to flow together.”

The elements of form have been on the forefront of Cooney’s mind for a great deal of her life. The owner of local business Cooney Pottery, she has 40 years of experience in the field of ceramic art.

Her process involves shaping on the potter’s wheel, trim­ming, decorating, carving, sgraffito, slip trailing, bisque firing and glaze application. But for her, the most rewarding aspect of the whole process is it all starts with unformed clay.

“The beauty of taking a lump of clay and creating something beautiful out of it is just so fascinating that I’m never bored with it,” she said. “I’m just as excited if not more now than I was 40 years ago.”

Born in Louisville, Cooney grew up mostly in rural In­di­ana. She said her interest in pottery began when she was a senior in high school after a classmate began teaching her to use a potter’s wheel.

“I loved it immediately,” she said.

Cooney went on to earn a Bachelor of Fine Arts in 1982 from Herron School of Art and Design in Indianapolis. During her senior year in college, she said a selection of her work was featured in the periodical Ceramics Monthly.

After graduation, Cooney became a studio potter at a Christ­ian coffee shop in Connersville, Indiana, co-owned by her husband David, a painter. The couple married in 1984.

“He painted, I did pottery and that just started our relationship,” she said.

Cooney moved to this area in 1985 after her husband landed a job in Fort Knox as an illustrator. She said as she began homeschooling her five children, family took precedence over ceramics.

Like her and her husband, Cooney’s children all have taken up creative endeavors. Cooney’s son Nathan – a musician and blacksmith – said his creativity heavily was inspired by his mother. He said he remembers trying to shape and harden mud when he was a child.

“It fueled that creative fire just growing up around it,” he said.

Although she spent most of her energy on her children during her 25 years of home­schooling, Cooney said she often would gift family and friends with homemade ceramics over those years. She said she didn’t pursue pottery extensively again until 2015, after making around 120 cups and plates for her son Clayton’s wedding reception.

“Once you’re producing and you’re back into it, you’ve got that creative flow,” she said.

She launched Cooney Pottery in 2017 and began displaying her work at regional art fairs such as Cherokee Triangle Art Fair in Louisville, Art in Speed Park in Sellers­burg, Indiana, Madison Chautauqua Festival of Art in Madison, Indiana, and the Shaker Village Craft Fair in Harrodsburg.

Cooney said she often views her work in pottery as a form of ministry. She held a pottery demonstration this week during the Hosting His Presence Con­ference at Vineyard Christian Fellowship. It served as an illustrated sermon.

Cooney has been active in the Elizabethtown church for the past seven years – regularly speaking during services and teaching classes.

As for the future of her business, Cooney said she hopes to expand her studio, create an online store and enter more art shows. She recently held her second Holiday Open House event, opening her home to customers to peruse her work.

Cooney Pottery can be found on Instagram and she can be reached at cooneypottery@gmail.com.