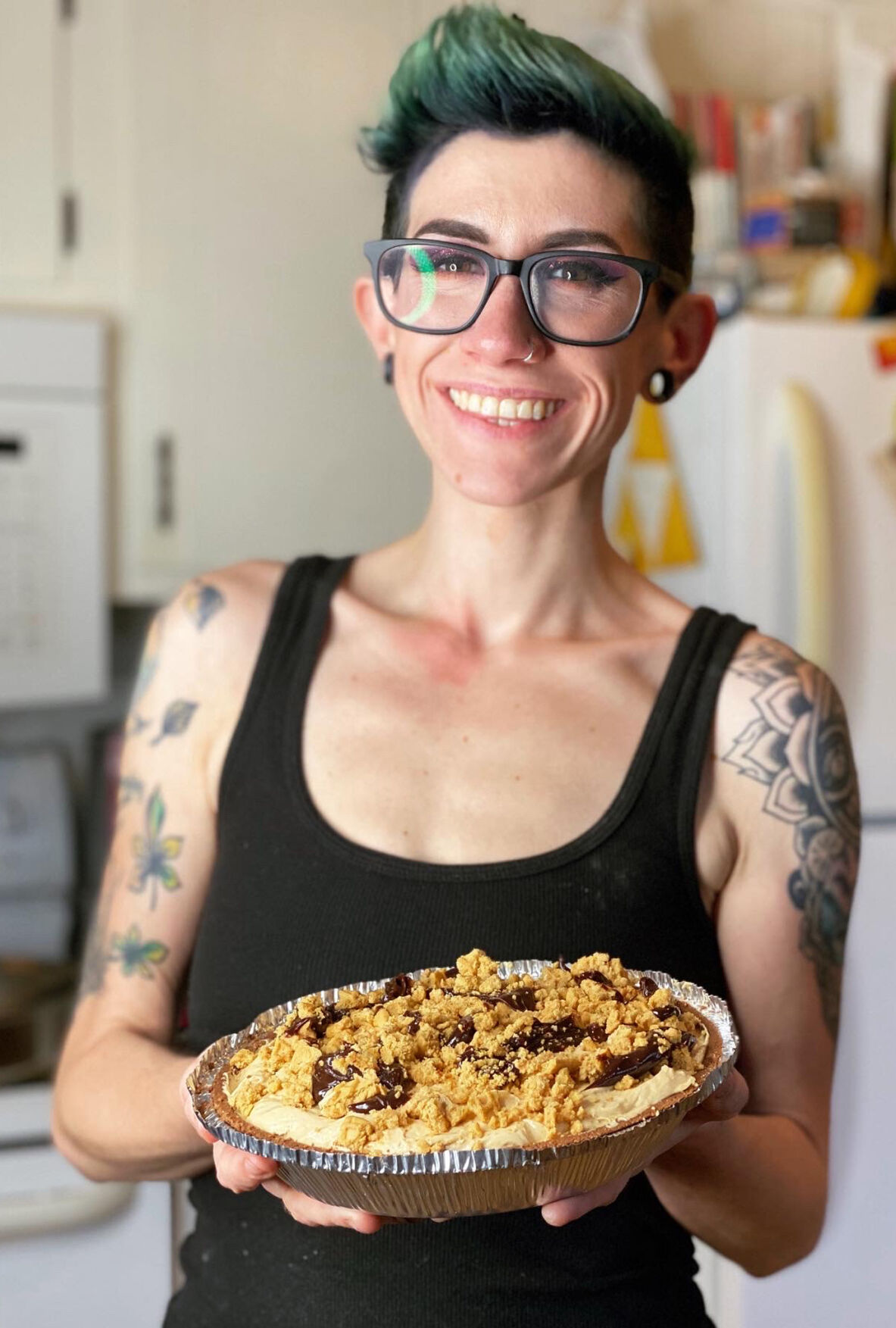 Submitted Tori Phantom has a popular TikTok and Instagram channel that has propelled her into social media influencer status during the pandemic. 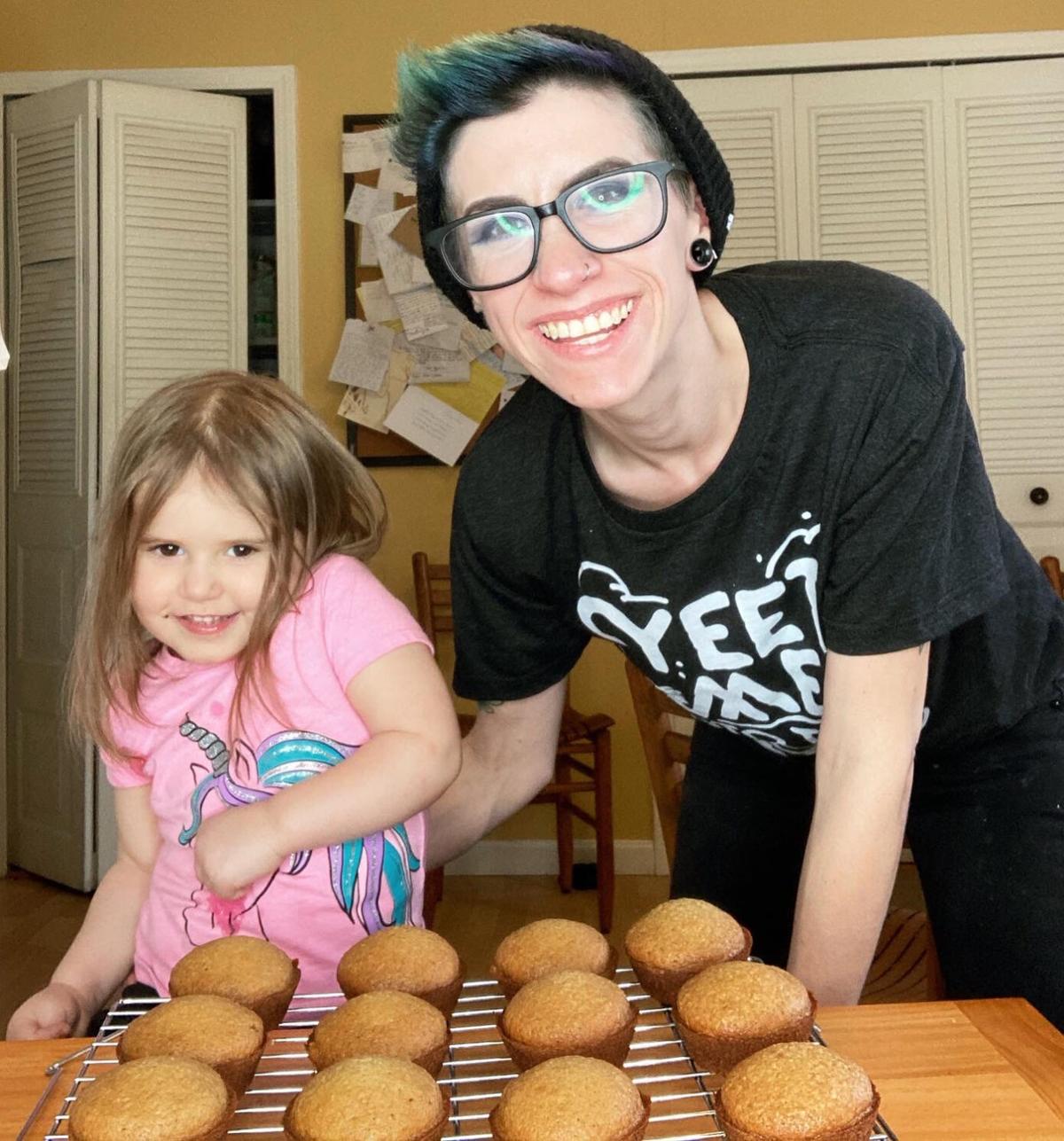 Tori Phantom with one of her three daughters making baked goods from left over apple sauce. Submitted 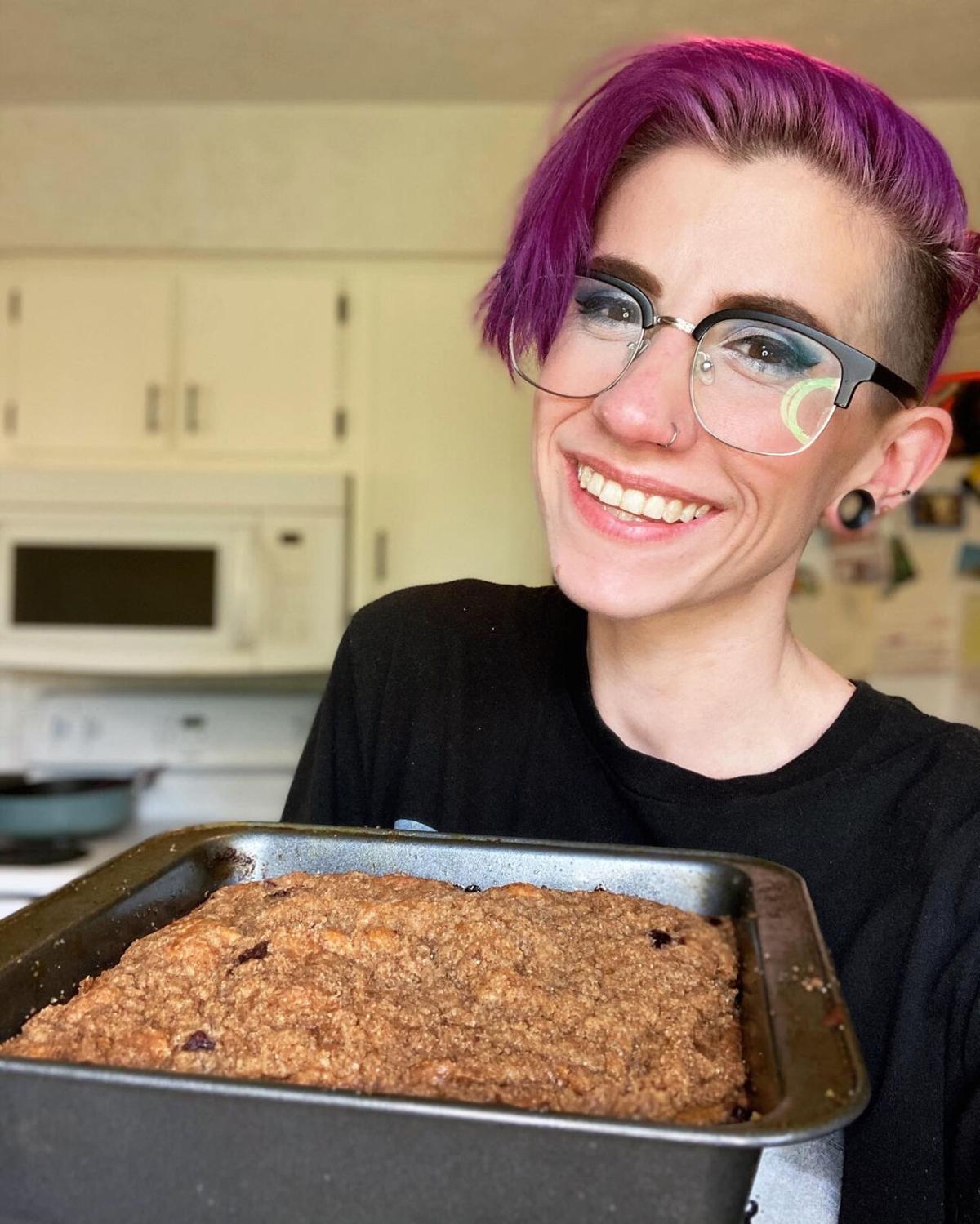 Tori Phantom, a social media influencer who lives in Elizabethtown, poses with a blueberry cake she made. Submitted

Submitted Tori Phantom has a popular TikTok and Instagram channel that has propelled her into social media influencer status during the pandemic.

Tori Phantom with one of her three daughters making baked goods from left over apple sauce. Submitted

Tori Phantom, a social media influencer who lives in Elizabethtown, poses with a blueberry cake she made. Submitted

Originally from upstate New York, Tori Phantom, 28, moved to Kentucky around three years ago and has become a social media influencer while home during COVID-19 precautions.

After friends encouraged her to start an account, she joined TikTok in 2019. She used it causally until March when the COVID shutdowns began.

“When everything started shutting down and my kids were suddenly home from school all the time, I dealt with a lot of anxiety, like I think many people did,” she said. “I have always found baking to be therapeutic so I started baking all the time and I decided to record it and put it on TikTok.”

She started a series called “Apocalypse Bak­ing” and her account started to gain a following.

“The entire pandemic felt like an apocalypse in a way, so I had to find a way to laugh about it for my own sanity,” she said.

In the videos, she took things her kids got from their school lunches they wouldn’t otherwise eat like fruit cups, applesauce, graham crackers and anything else leftover in their lunch and turn it into baked goods. She did it to limit food waste and have fun with her kids.

“Many of these videos went viral and I gained hundreds of thousands of followers within a couple months,” she said.

After the popularity of her posts she realized she had something to offer an audience, and people were interested in what she had created.

“It has been a really exciting experience and I’ve met some amazing people along the way,” she said. “I have been so surprised and humbled by the popularity and growth on my social media accounts.”

It all started as a cooking and baking channel.

“Although I stay true to that and post a new recipe every day, I’ve also grown my channel into more than that,” she said.

One of those things is “waffling” or messing up.

“Every time I post a recipe, I get countless comments asking me to waffle it and it is a fun way to interact with my audience and keeps things fun,” she said. “I’m always encouraging my audience to ‘try it, do the thing,’ an accidental catch phrase that will definitely be noticed if I don’t recite it at the end of my videos.”

She’s been baking for a long time. One of her favorite Christmas memories was getting her own baking set with baking mixes at age 8.

“It keeps you busy, you learn new things and the best part, you get to eat the final product,” she said. “Food is my love language, all of my friends and family know if they step foot in my house, I’m going to feed them.”

Her cooking channel on TikTok has evolved into more, including parenting and makeup.

From the beginning, she got messages from fans about what her videos meant to them. They also thanked her for “spreading positivity during such a dark time in the world,” making them smile.

“I wanted to further my message of positivity and kindness despite what the world may look like,” she said. “Since I was young, my life goal was to make an impact on the world, no matter how big or small I wanted to make a difference.”

Her husband, Jimmy Wilson, said he’s always knew Phantom was focused and driven on things she’s passionate about. That ranges from finishing her college degree online while pregnant to making TikToks about how to re-purpose food waste.

“I’ve never known her to not put her all into what she loves,” he said, adding she’s a parent above all else. “Our kids are the most important thing to her and everything she does has their happiness and wellbeing as the end goal.”

Her first famous Tik­Tok video was about opening rocks to look for geodes with their oldest child. It received almost a million views, he said.

“Many of these videos incorporate the kids by having them help her in some fashion and they’ve even got their own catchphrases now,” he said. “It’s a wonderful way for them all to be able to spend quality time together during a climate that needs all the happiness and tranquility one can get their hands on.”

He said she’s still amazed people she’s never met are supportive of her.

“She frequently gets recognized in public when she’s shopping in town but with hair like hers, she’s sure to stand out,” he joked. “But that’s always been Tori, never one to just blend into the background.”

Last year she started wearing makeup on her videos and she was asked on her videos how she did it so she branched out into makeup tutorials.

“I made a video about it, but it was more of a joke,” she said. “I am no makeup artist, but the video did really well.”

Viewers, she said, enjoyed seeing someone they could relate to who was a make up newcomer having fun.

This evolved into what she called #makeuppeptalks. She talks about parenting, mental health and other things while doing the videos.

“I am very passionate about gentle parenting and helping people so nearly every day I post a video where I put my makeup on and give anecdotes about how I use gentle parenting in daily life with my kids, or my beliefs or just spreading a little bit of positivity,” she said.

She’s also started a podcast called Tori Phan­tom Talks to discuss in more depth about issues she brings up about during the makeup tutorials.

On her growing YouTube channel, she wants to raise awareness to a rare genetic disorder called Beckwith Wiede­mann Syndrome. It’s a condition her daughter has lived with.

She’s grown her social media enough to make money as an influencer, but, she said, she’s only beginning and is learning there is a curve in negotiating with companies.

“I’ve been a stay-at-home mom with my kids, one being special needs for four years,” she said. “It’s an exciting experience and a fun dream, to think I could really make it and help to really support my family doing something I love and spreading positivity.”

She wants to spread love and inspire others to do the same through her social media.

“I am thankful for a platform to do that and look forward to the future and the exciting things to come,” she said.