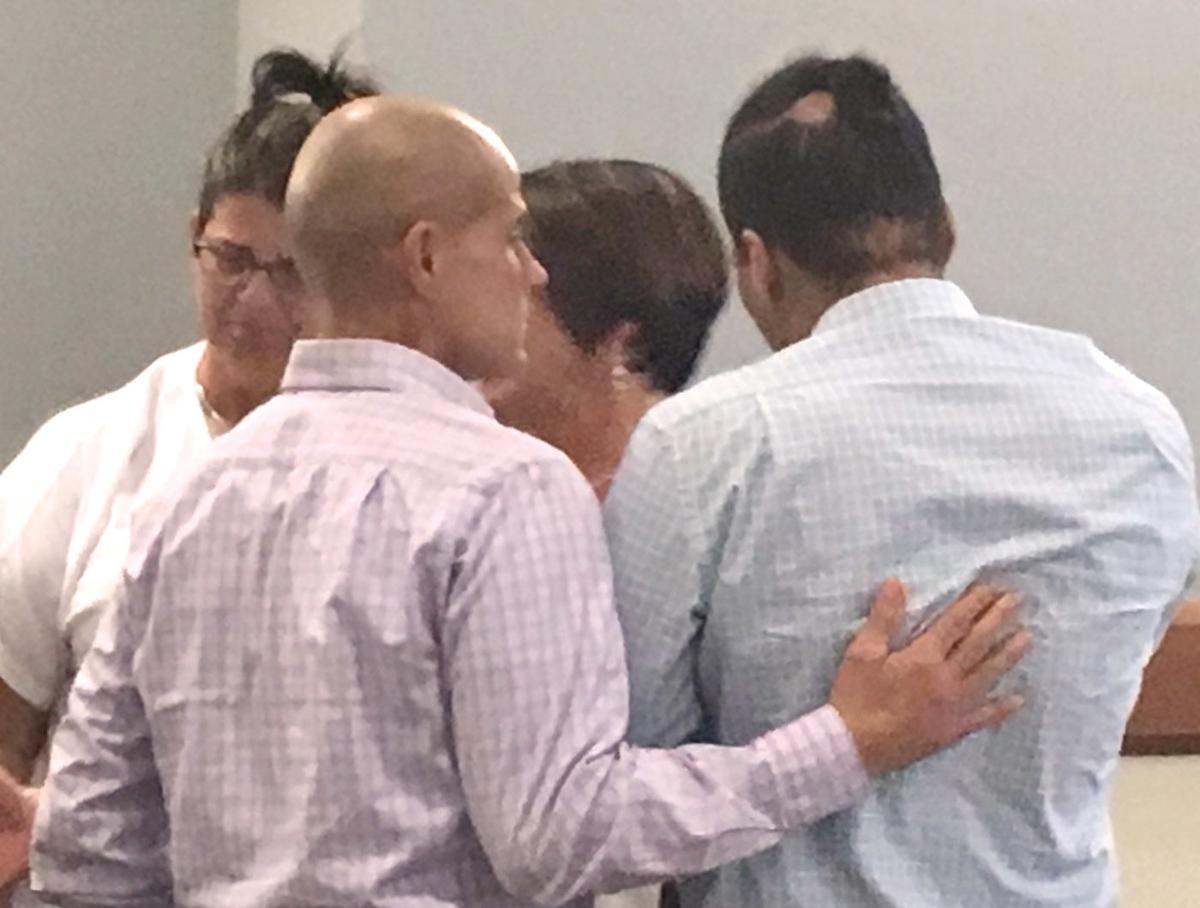 Travis Embry-Martin rubs the back of his husband, Billy, after Wednesday afternoon’s verdict. Billy Embry-Martin had been charged with murder in the 2017 death of Hunter Payton, 4, a foster child in their home. 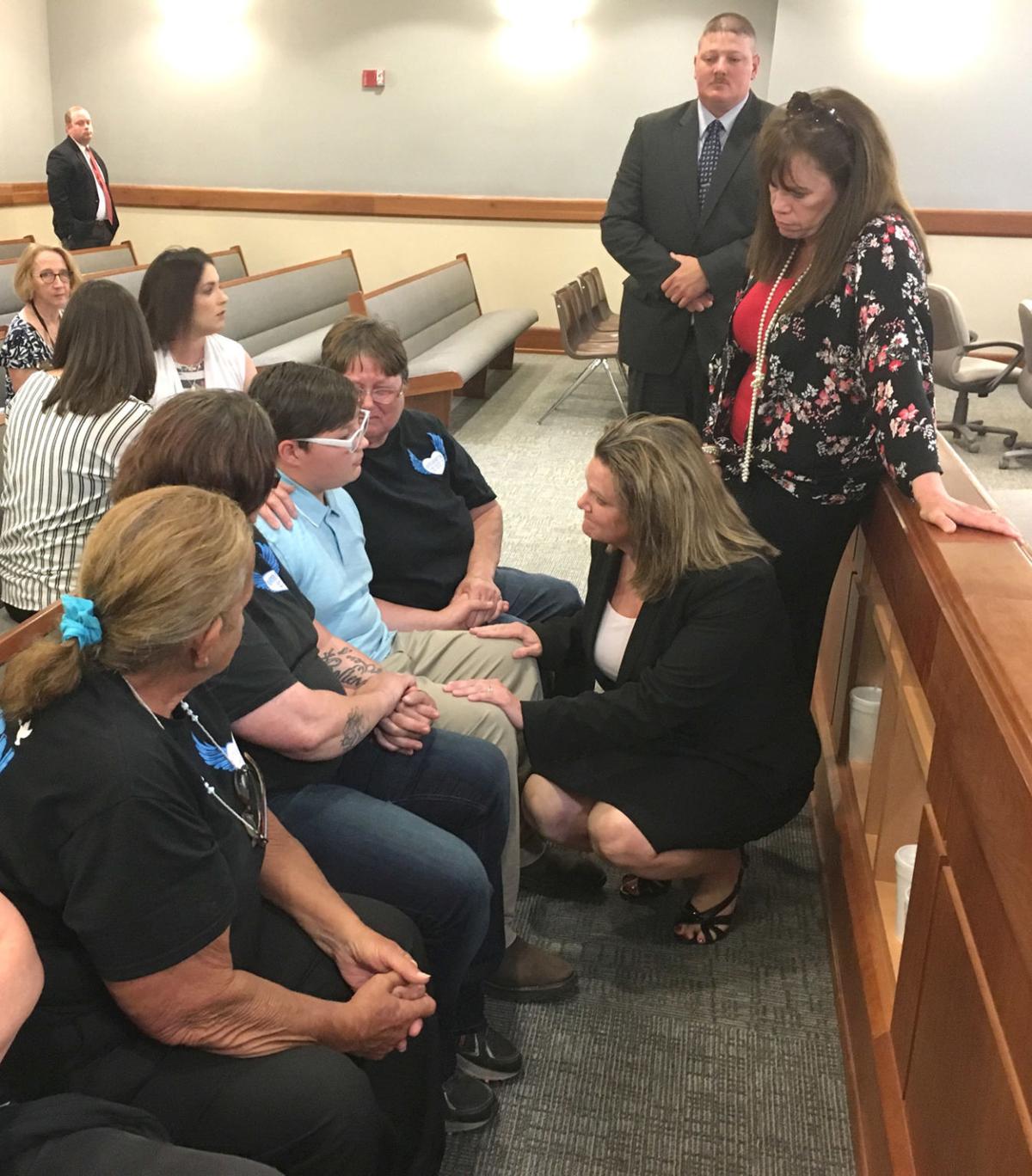 Assistant Commonwealth’s Attorney Teresa Logsdon talks Wednesday afternoon to Thomas Payton, older brother of Hunter Payton, and other family members of Hunter’s following a not guilty verdict in the case. 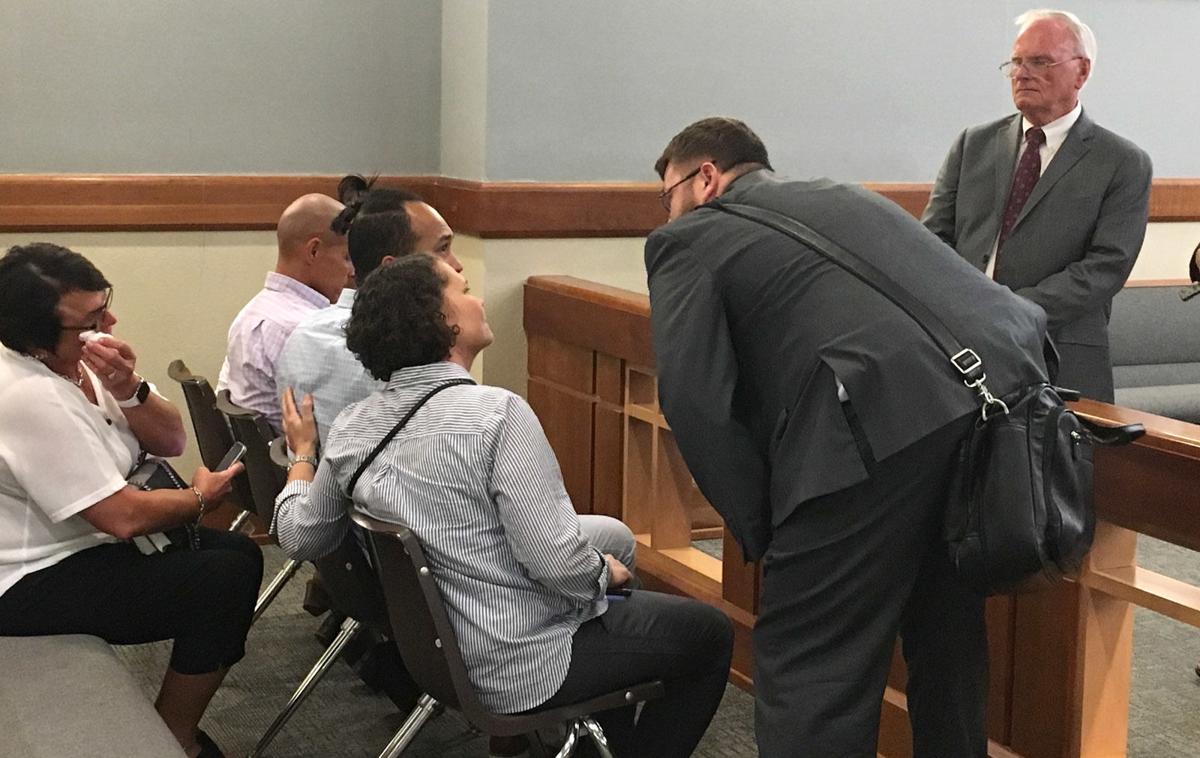 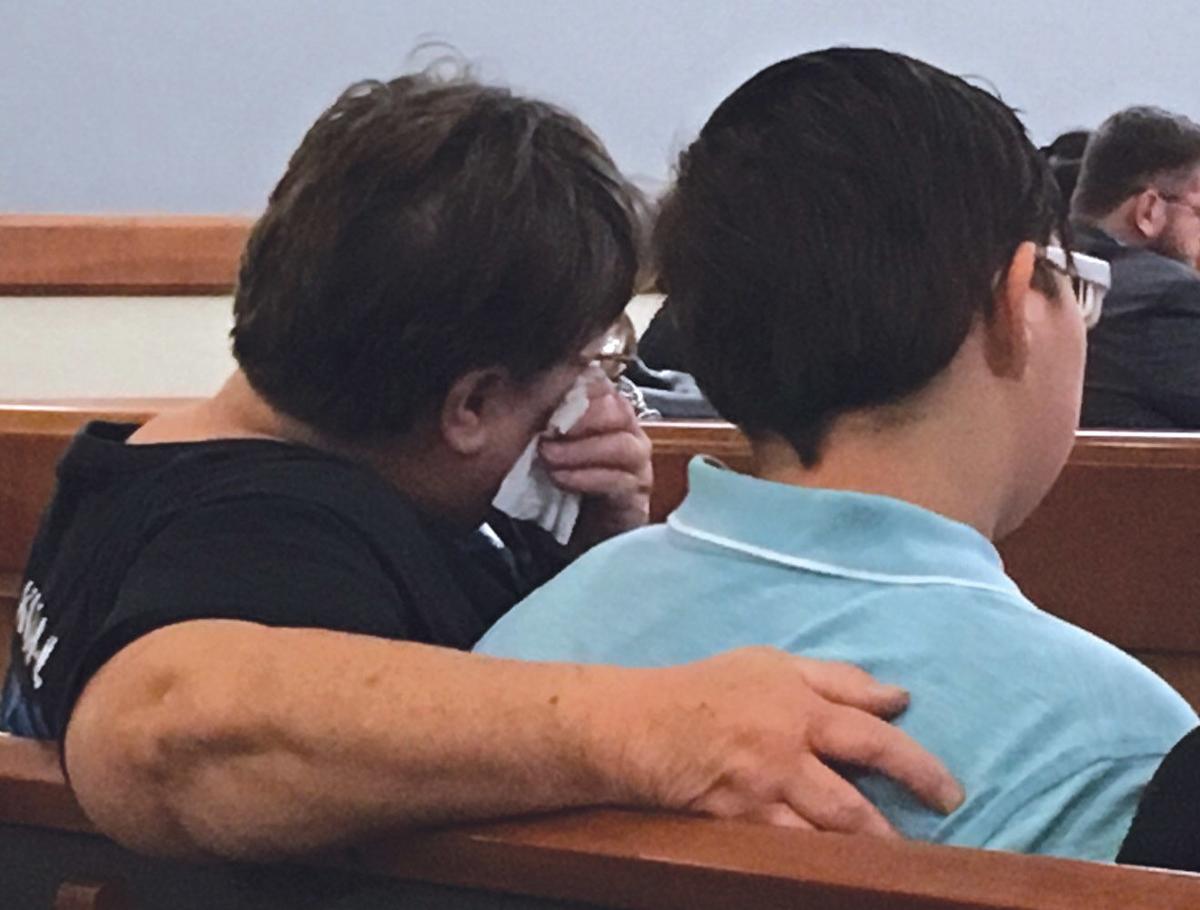 Willodean Cross, a grandmother of the late Hunter Payton, wipes away a tear during closing arguments Wednesday morning. Thomas Payton, 13, is sitting next to her.

Travis Embry-Martin rubs the back of his husband, Billy, after Wednesday afternoon’s verdict. Billy Embry-Martin had been charged with murder in the 2017 death of Hunter Payton, 4, a foster child in their home.

Assistant Commonwealth’s Attorney Teresa Logsdon talks Wednesday afternoon to Thomas Payton, older brother of Hunter Payton, and other family members of Hunter’s following a not guilty verdict in the case.

Willodean Cross, a grandmother of the late Hunter Payton, wipes away a tear during closing arguments Wednesday morning. Thomas Payton, 13, is sitting next to her.

Five hours after a jury began deliberating the fate of Billy Embry-Martin’s life inside the Hardin County Justice Center, he heard the words he’s proclaimed in his case for nearly 18 months from Hardin Circuit Judge Ken Howard: “Not guilty.”

Embry-Martin, 34, who faced the possibility of leaving the courtroom Wednesday afternoon in handcuffs and spending the rest of his life in prison if he had been convicted of murder, instead walked away with his husband, Travis, and a few friends without the burden of a life-altering charge hanging over him.

“It’s just a huge relief,” said James Hafley, Embry-Martin’s lead attorney. “He’s maintained his innocence since the very beginning of this thing and he’s been adamant about that ... I’m at a loss for words.”

When Howard read the decision of a 12-person jury, Embry-Martin wiped away tears, at times burying his head in his hands and then hugging Hafley. He continued to weep for several minutes after a jury of six men and six women exited the courtroom.

Embry-Martin, an Elizabethtown resident, was charged in January 2018 in the death of Hunter Payton, 4, of Grayson County. Hunter was placed in the care of the Embry-Martins along with an older brother and younger sister about two months before Hunter’s death on May 10, 2017.

“I just can’t believe what I heard,” said Willodean Cross, a grandmother of Hunter’s. She said when she heard the judge say “not guilty” her chest started hurting.

Cross, who along with other family members, many wearing matching T-shirts in support of Hunter, attended the trial every day, sitting in the first two rows of the courtroom.

“I just froze,” she said of the verdict. “With all the evidence I thought ... I just don’t understand it.’’

Embry-Martin was the lone adult in the home the day the child was hurt.

The Kentucky Med­ical Examiner’s Office ruled Hunter died from an inflicted closed head injury to the back of his head. The fracture pushed bone into the child’s brain, said Dr. Amy Burrows-Beckham, an assistant state medical examiner, who testified in the case and performed Hunter’s autopsy.

Eight months after Hunter’s death, Embry-Martin was arrested and charged.

“He cooperated fully and was up front throughout the investigation,” Hafley said. “He wasn’t trying to hide anything.”

Hafley said multiple times police at no time needed a search warrant to enter their home and his client always cooperated.

Embry-Martin testified and can be heard in a 911 call that he was putting away dishes from an early afternoon meal with Hunter and Summer when he heard a “thud” from around the dinner table, and then saw Hunter get up and say, “Me OK.” A few seconds later, he said the boy went into the living room, reportedly had a seizure and collapsed.

The bench he was sitting on was 26 inches from a flat surfaced floor and it’s estimated his head was a little more than 4 feet high when he fell.

Hunter was taken to Hardin Memorial Hospital and then flown to Norton Children’s Hospital where the child died less than two days later.

Attorney Paul Mussel­white, who assisted Hafley in the case, said the jury heard what “kind of man Billy is ... that he’s a kind and caring man,” which played a key role in their decision.

Closing arguments in the six-day case lasted about 90 minutes with Hafley taking up most of that time, saying the prosecution hadn’t shown Embry-Martin caused Hunter’s skull fracture or that Radcliff Police Department’s investigation hadn’t been thorough enough. He said detectives didn’t check areas around where Hunter reportedly had fallen such as corners of furniture, cast iron dog bowls or a window sill for evidence.

“This case is a tragic story,” Hafley said to jurors. “Hunter’s story is sad. I’m not arguing with you on that. But it’s not a murder story.”

Assistant Common­wealth’s Attorney Teresa Logsdon played various videos from previous testimony and said Hunter had died by being “grabbed by the face and his head was shoved down into something sharp.”

Once the jury left, Logsdon knelt down in front of Hunter’s supporters and talked to them. Among the group was Hunter’s 13-year-old brother, who had testified in the case Monday.

“While the outcome was not what I had hoped for, I respect the process and the jury’s verdict,” Logsdon said in a statement. “My job is to do the best I can with the facts I’m given and seek justice. I can rest knowing I did the best that I could for Hunter.”