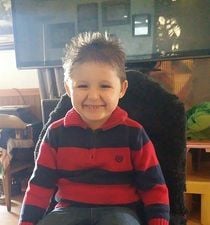 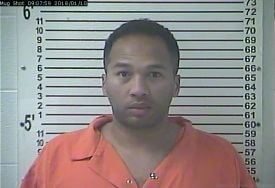 A little more than two months after three children were removed from the Ca­ney­ville home of Ryan and April Payton in March 2017, the youngest of the children — age 4 — died from a head injury while in foster care at a Radcliff home.

On Thursday night, the man police believe is responsible for the May 10 death of Hunter Payton was arrested and charged with murder.

Billy Paul Embry, 33, was arrested around 9:30 p.m. Thursday by Radcliff police. According to an arrest warrant, a final report from the state Medical Exa­miner’s Office in Louis­ville determined the boy died from an inflicted head injury.

Elizabethtown attorney Ron Hines, who is representing the Paytons, said Friday the children never should have been removed from the home in the first place. The three children, Hines said, had been in foster care since March 6 at the home of Embry and his husband.

Hines said someone reported to Child Protective Services there was drug use in the Payton home. He said the couple was given less than 24 hours to take a drug test or the children would be removed. He said they didn’t have the money to pay for a test and the next day, CPS removed the two boys and a girl. Hunter was the youngest of the children.

A person with the Kentucky Cabinet for Health and Family Ser­vices’ Protection and Permanency office in Eliza­bethtown said Friday afternoon no one from the office could comment. A number provided to seek comment went unanswered twice Friday afternoon.

Hines said he became involved in the case shortly after Hunter’s death when a friend of the couple recommended they call him.

The other children were removed from Em­bry’s home, Hines said, soon after Hunter initially was injured and they remain in foster care.

Embry told authorities in May that Hunter had suffered a head injury from a fall, the warrant stated.

Radcliff Police Depart­ment was contacted May 8 by Norton Children’s Hospital in Louisville in reference to a possible child abuse incident after the child was transported there from Hardin Memorial Hospital. When Hunter arrived at the hospital, he was unconscious and not breathing, according to the warrant.

An autopsy was performed May 11 and a final findings report from examinations was completed Dec. 27. A warrant for Embry’s arrest was issued Thursday night.

Hunter initially was injured, according to the warrant, at a residence on Black Ravens Court. Embry was the only adult in the home when the child sustained the injury.

“We’ve been trying to get these children out of foster care and back to their loving parents,” Hines said.

He said the family is pleased someone is being “brought to justice.”

“It’s somewhat anti-climactic,” Hines said. “Their son is still dead. ... They are somewhat relieved, not that there is closure. At least someone is being held accountable.”

Embry is being held in lieu of a $250,000 cash bond in the Hardin County Detention Center. He is scheduled to appear at 9 a.m. Friday in Hardin District Court.

“We had to wait to get everything we needed with results,” he said. “That’s why there was a delay in the charges.”

He said Embry is “where we believe the responsibility lies.”

We were told by the Judge that the state of KY could not afford to pay for drug test for everyone ordered to take them and since we no longer had to care for our children, we should have extra funds to cover the cost of the WEEKLY test...then both my husband and I were ordered to pay over $400 month EACH, so that was more than $800 in child support!!

Thankfully my children are now home, drug free, and their education back on track. But we owe the state of KY more than $10,000 in back support

Two things jump out at me from this article. (1) If the Health and Family Ser­vices’ Protection and Permanency office requires a drug test, it should afford a provider and the cost of the test to those being required to take one; (2) It shouldn't take from May 10th to December 27th for a report of findings to take place.

This is typical of KY! Our children were taken in 2014 over drug allegations. We were not ordered to take drug test for 2 months after the kids were gone, never tested positive for drugs, then they added alcohol test which we never failed either...still took until 2017 to get our children home. KY DCS is out of control!

Might I also add that while my children were in the care of KY they were heavily medicated and repeatedly institutionalized.