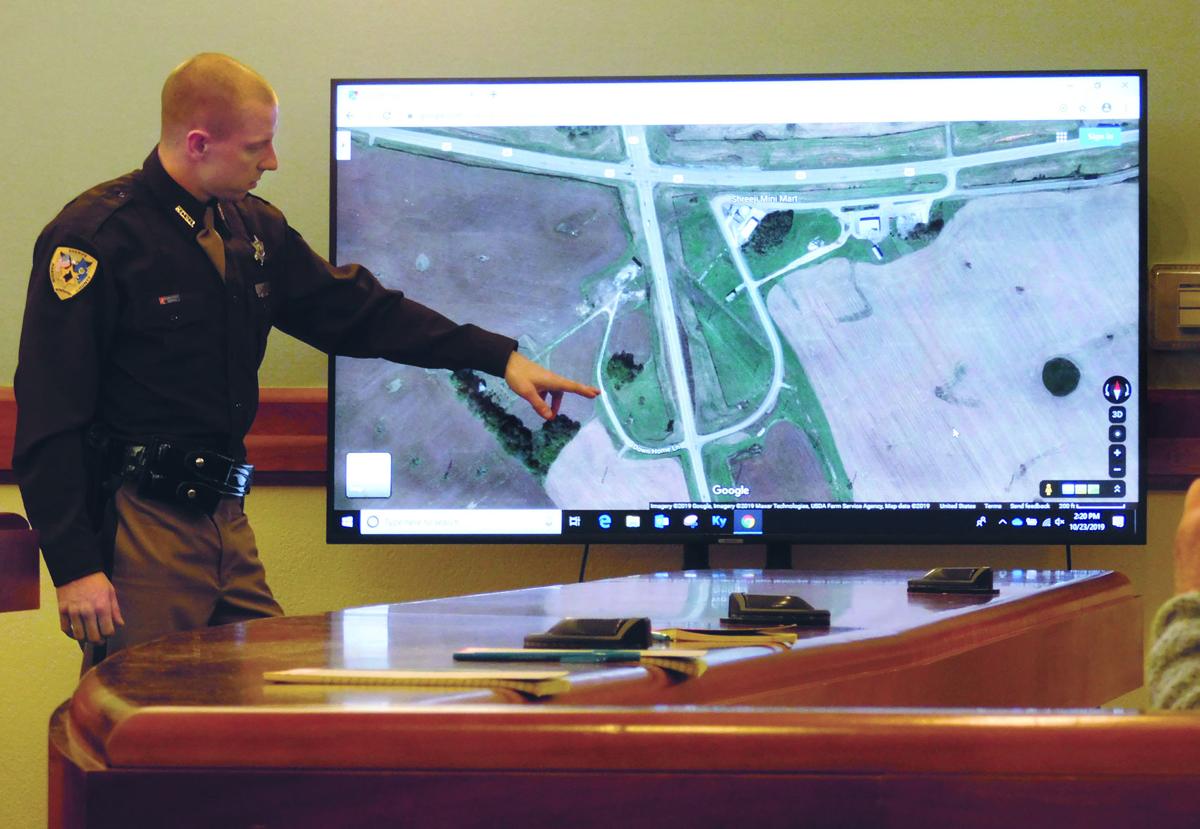 During his testimony Wednesday, former Meade County Sheriff’s Deputy Brandon Casey points out where a pursuit began last October. Two teens were killed in the Oct. 20, 2018, crash on U.S. 31W in Radcliff. Shawn Welsh faces several charges in the case, including two counts of murder. 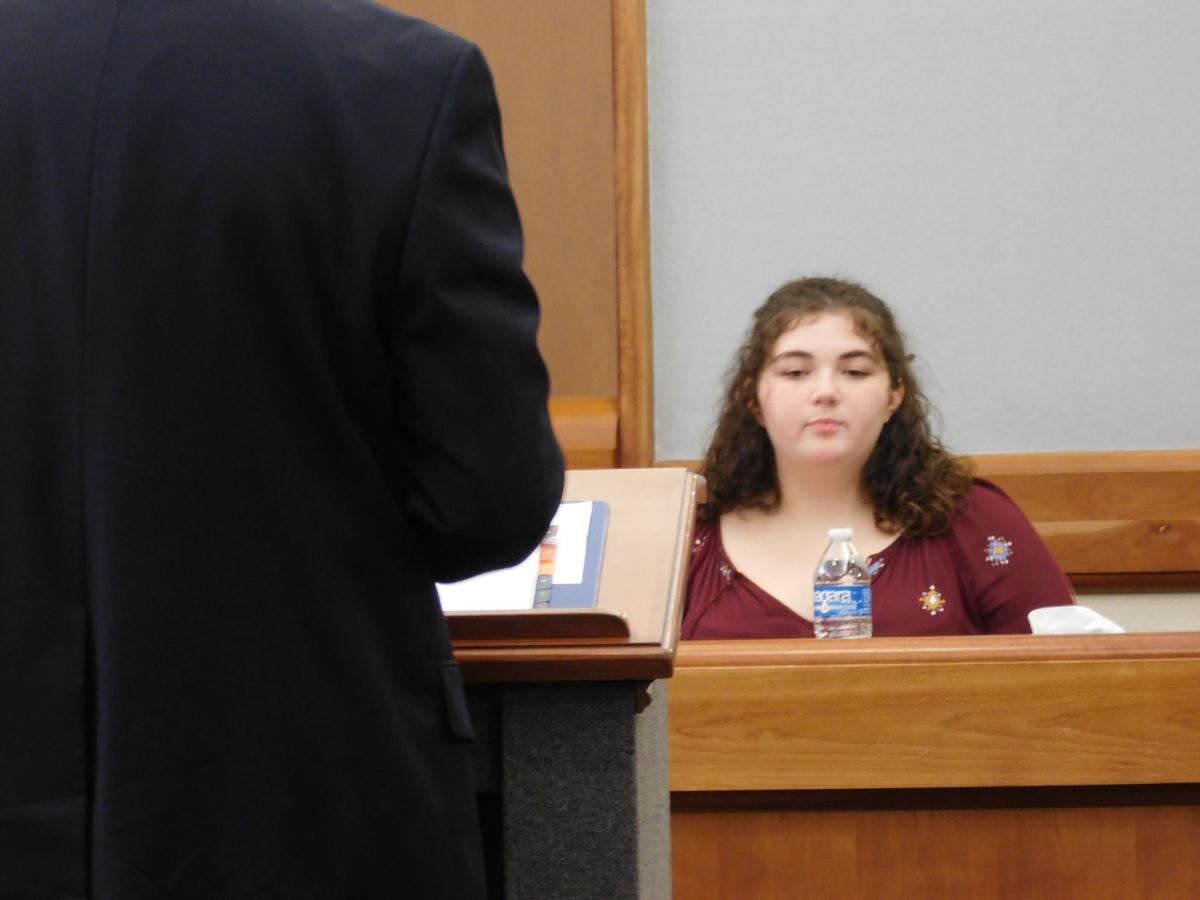 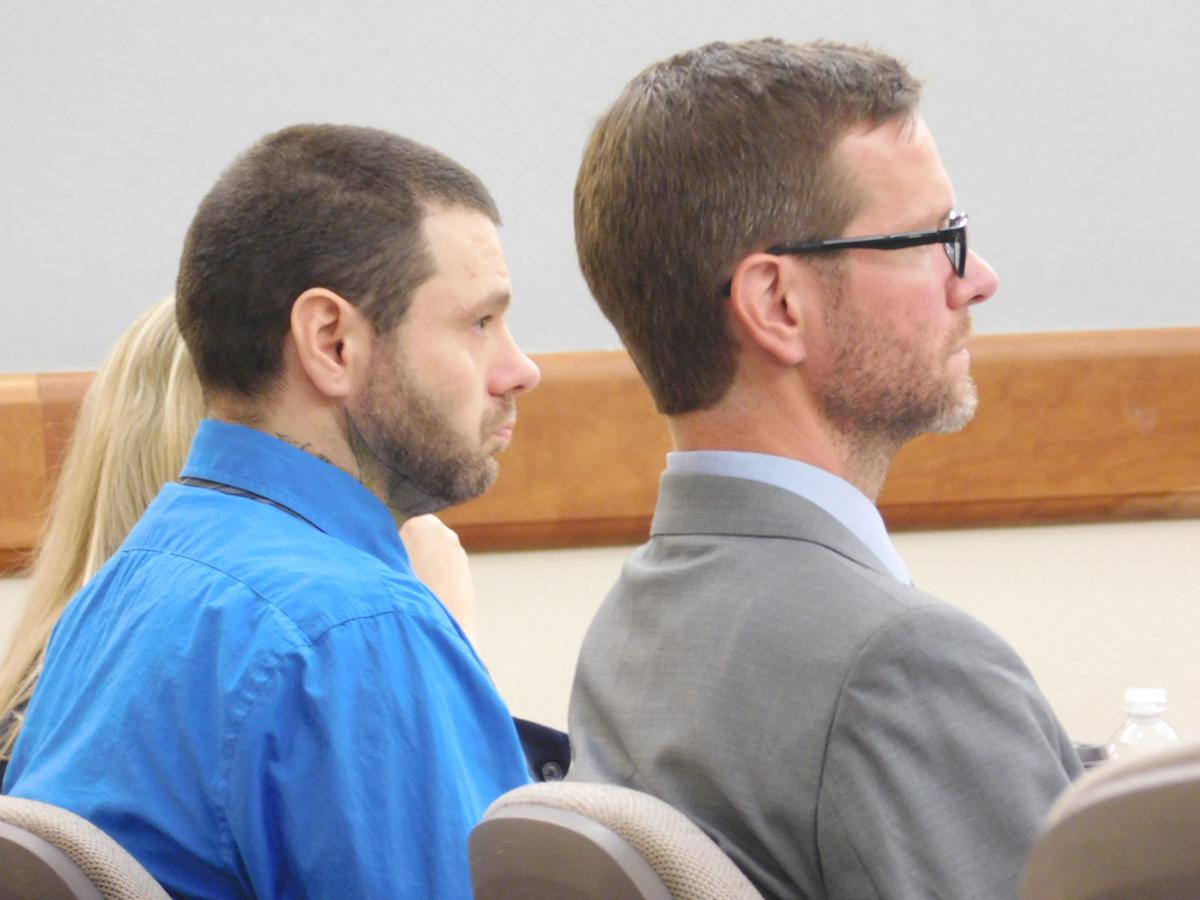 Shawn Welsh, accused of murder in the death of two teens last year, sits Wednesday afternoon between two of his attorneys as he listens to testimony. Kate McCubbin is to his left and Adam Sanders to his right. 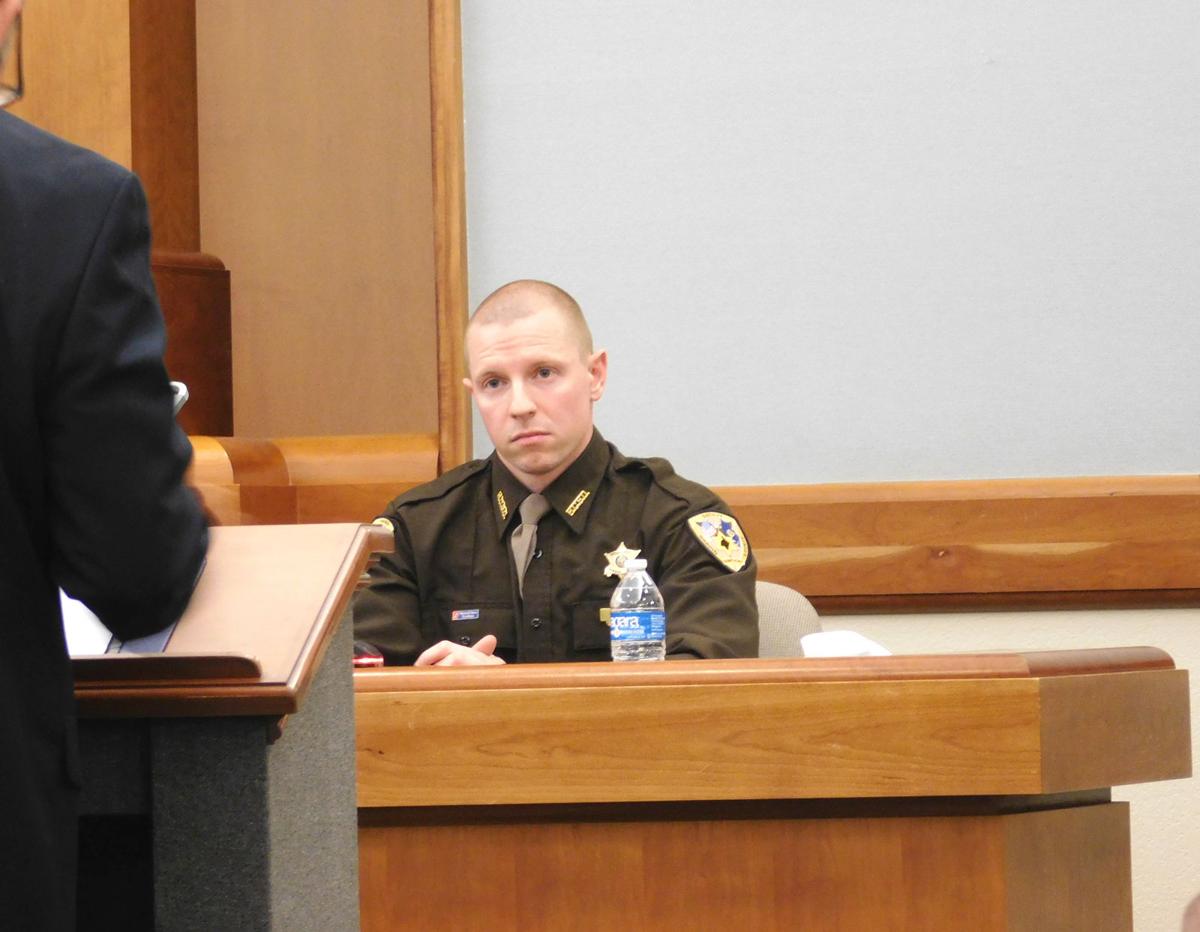 During his testimony Wednesday, former Meade County Sheriff’s Deputy Brandon Casey points out where a pursuit began last October. Two teens were killed in the Oct. 20, 2018, crash on U.S. 31W in Radcliff. Shawn Welsh faces several charges in the case, including two counts of murder.

Shawn Welsh, accused of murder in the death of two teens last year, sits Wednesday afternoon between two of his attorneys as he listens to testimony. Kate McCubbin is to his left and Adam Sanders to his right.

Two teenagers who survived a car crash that killed two of their friends last October testified Wednesday afternoon they were driving around waiting to return to John Hardin High School to attend a dance when their vehicle was struck.

Macie McMillen, 15, a John Har­din sophomore, and Cameron Brown, 17, a junior, said they each were talking with Katarina Peeters, 17, shortly before a violent crash on U.S. 31W on the south end of Radcliff. A stolen Silverado truck driven by Shawn Welsh, 37, of Mar­ion, West Virginia, was traveling in the southbound emergency lane and slammed into the Honda Accord being driven by Jacob Barber, 18.

Barber and Peeters died in the Oct. 20, 2018, crash that occurred at about 8:30 p.m. A little more than a year later, their friends took the witness stand.

“I remember talking to Kat about a text message with my brother and then everything went black,” McMillen said on the opening day of the trial. “When I opened my eyes, I remember an EMT holding a flashlight and the roof of the car was off.”

McMillen and Brown were in the back seat of the car.

With four rows of the courtroom gallery Wednesday filled with family, friends and supporters of the four teens, Brown testified he was talking to Peeters about a song she liked that was playing.

“I woke up in the car,” he said. “… it was cold outside and there were a bunch of blinking lights.

“I remember being taken out of the car and then I woke up in the hospital with some of my family members around me,” he added.

He was uninjured in the crash and was apprehended by police shortly after leaving his vehicle.

McMillen said the group had attended a trunk-or-treat event at John Hardin High School. Because the start of a dance was delayed, they decided to leave and drive around until the dance would begin about an hour later.

Barber was driving up South Wilson Road and then was at a red light on Battle Training Road. When the light facing him changed to green, he pulled out. When he did, the Silverado, going an estimated 75 mph while attempting to avoid traffic and police, struck the Accord, prosecution co-counsel Shelt Lewis, an assistant county attorney, said in opening statements.

Lewis’ opening statement also said methamphetamine was found in Welsh’s system, on him and in the vehicle that had been reported stolen in West Virginia.

Peeters was a John Hardin High School senior and Barber, who had attended the school, had received his Hardin County High School diploma a week before he died.

McMillen and Brown said they suffered multiple injuries and still suffer from the result of the collision.

Brown, for instance, said he no longer can run like he once did. McMillen said she no longer can write or paint for a very long period of time because of a hand injury. She testified she underwent rehabilitation for six months that ended when an insurance company refused to keep paying for the sessions.

The pursuit of Welsh’s vehicle began in the Flaherty area when Meade County Sheriff’s Deputy Brandon Casey pulled down an isolated, narrow road after seeing the Silverado frequently slow down as he drove behind it, separated by only another car on a main stretch of road.

Casey testified he thought the driver may have been lost and the road in Meade County is known as an area for drug use and sexual activity.

“There is no legitimate, lawful reason to be down there,” said Casey, who now is employed as a K-9 officer with the Hardin County Sheriff’s Office.

When the Silverado turned around in the cul-de-sac, it was facing Casey’s SUV, he said.

He said he and Welsh made eye contact “for a split second” and then Welsh sped up. He said he could see rocks flying from the speed of the truck as it drove away.

He said he called Meade County dispatch and pursued the truck. He testified he didn’t know why he pulled away.

Welsh was accompanied in the Silverado by his girlfriend, Laura Neville, 37, of Morgan­town, West Virginia. She is charged with first-degree possession of a controlled substance – methamphetamine and also was charged on a fugitive warrant. She remains in jail in lieu of a $10,000 cash bond in the Hardin County Detention Center. She is scheduled for trial in January.

Casey testified the 18-minute, 21-mile pursuit reached high speeds. While he and officers from the Vine Grove and Radcliff police departments who joined the chase would slow down at traffic lights and stop signs, Welsh drove through them, he said. He said Welsh also drove in a ditch to avoid tire spikes.

Under cross examination from defense attorney Erin Hartman, one of three attorneys representing Welsh, Casey said about six to eight miles of the chase were in Meade County and the remainder through Hardin County, much of it through busy traffic and residential areas.

He said he had no com­munication with any other officers or Hardin Coun­ty dispatch.

He said he never was told to discontinue his pursuit and he was the closest officer to Welsh during most of the chase.

Kentucky State Police has handled the crash investigation. Casey testified he never has been interviewed by KSP regarding the case.

One of Welsh’s attor­neys, Adam Sanders, said in opening statements his client is responsible for the deaths and injuries.

“Find him guilty of some other homicide other than murder,” he told the 11 women and three men of the jury.

The trial resumes at 9 a.m. today in Hardin Circuit Judge Ken How­ard’s courtroom. If convicted of murder, Welsh could spend the rest of his life in prison.

Two members of the Kentucky State Police mapped out much of the investigation into last October’s U.S. 31W car crash that killed two teens and…