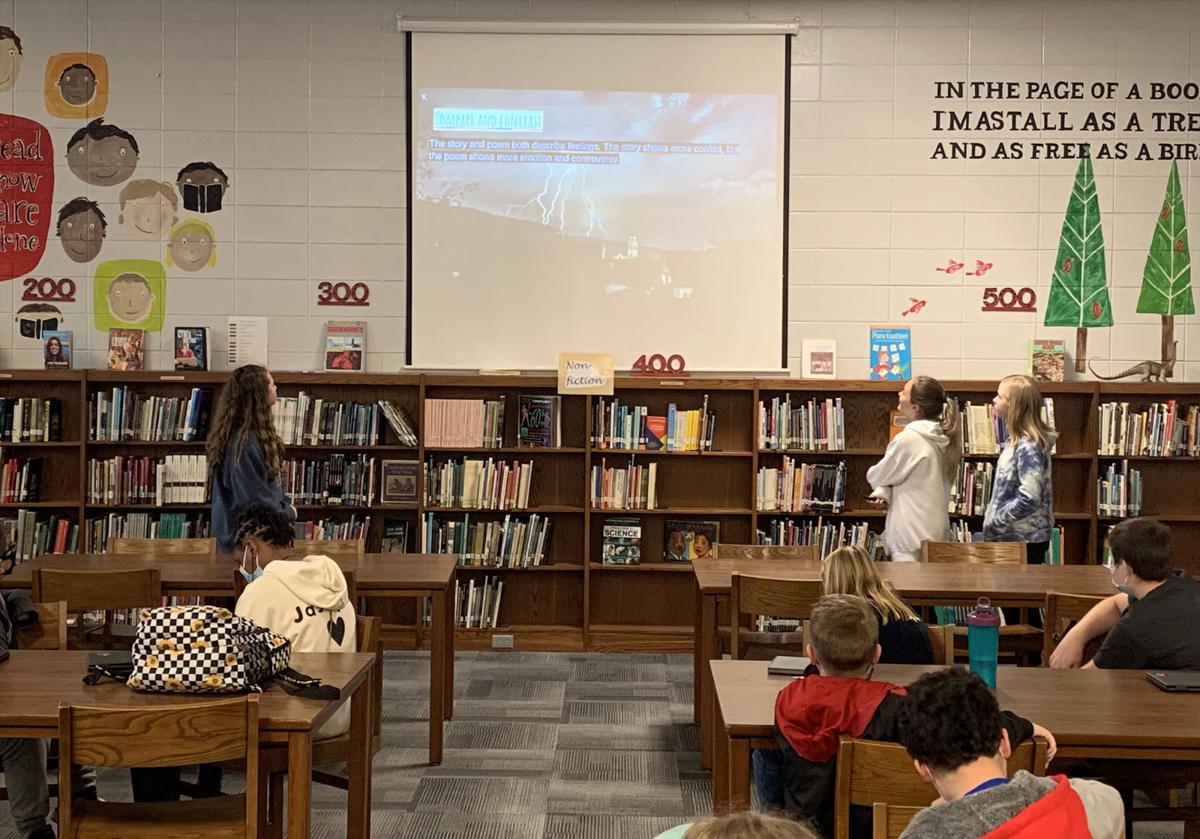 Bluegrass Middle School sixth-grade students from left, Marli Chitwood, Kaylynn Curry and Stella Janes conduct their presentation at the school library on Thursday. The class has been working through a Project Based Learning Approach. 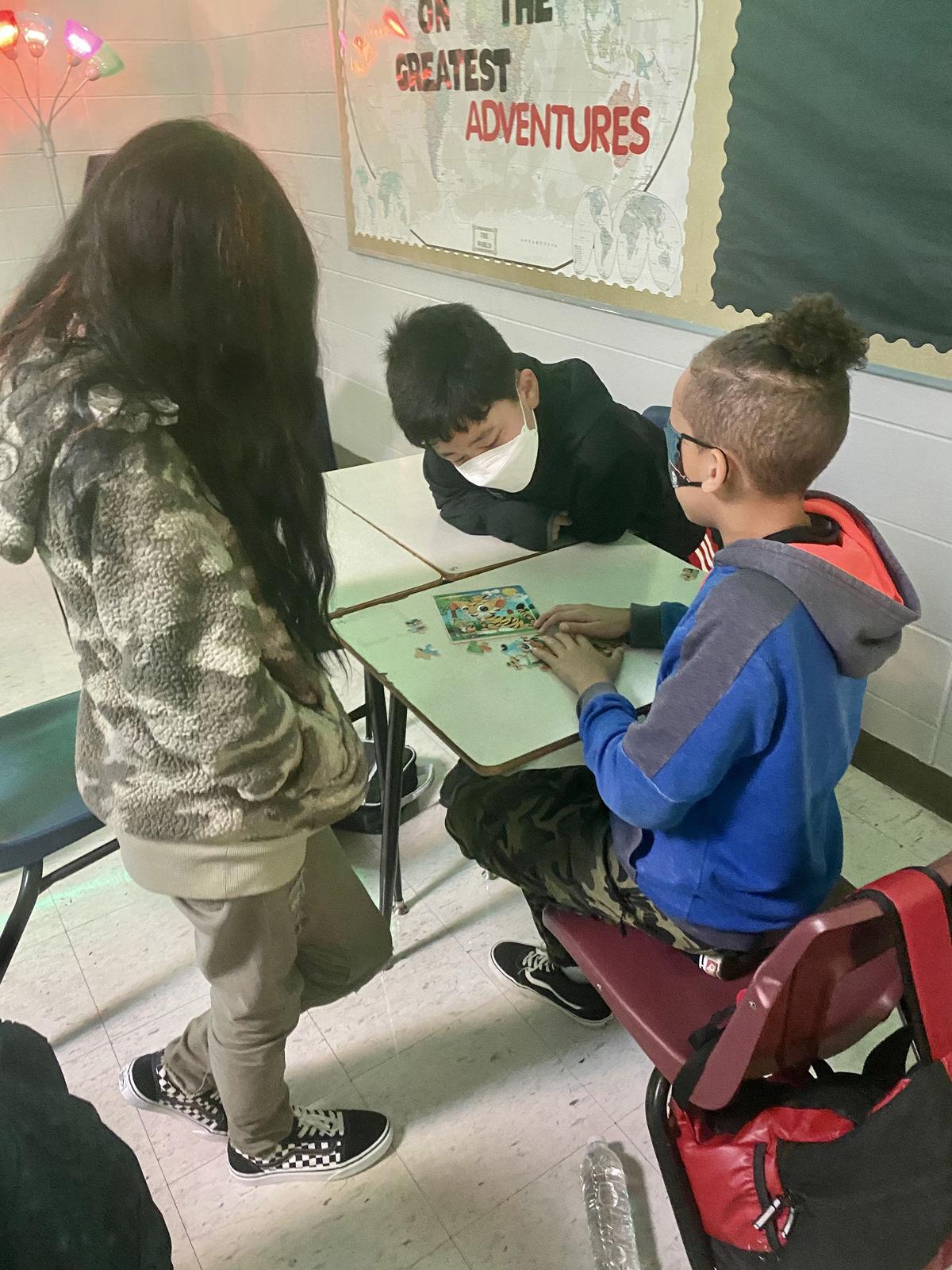 Bluegrass Middle School sixth-grade students from left, Tinley Jenkins, Emilo Rice and Joshua Jin conduct a team-building exercise where two students help guide a blindfolded student to complete a puzzle. The class has been working through a Project Based Learning Approach.

Bluegrass Middle School sixth-grade students from left, Marli Chitwood, Kaylynn Curry and Stella Janes conduct their presentation at the school library on Thursday. The class has been working through a Project Based Learning Approach.

Bluegrass Middle School sixth-grade students from left, Tinley Jenkins, Emilo Rice and Joshua Jin conduct a team-building exercise where two students help guide a blindfolded student to complete a puzzle. The class has been working through a Project Based Learning Approach.

Students and teachers in Hardin County Schools are handling a new approach that puts the power in the hands of the students while also bringing in the community.

Training was conducted over the summer for the PBL approach with the district partnering with New Tech Network. The sixth-grade class at Bluegrass is now in year one of a three-year project to infuse PBL into the school, and receive coaching during the school year.

Brandy New, director of innovation for HCS, said in an email that the PBL approach is “creating deeper learning by making connections across content areas, and posing students with authentic tasks based in our community.”

Vincent said they talked in the summer that one of the goals of the project is to give students an authentic audience outside of school.

She said since diving into it this school year, she’s been seeing how it benefits her students through its sense of exploration, as it puts the learning in the hands of the students and gives them more power.

“I’ve been able to see the conversations that they were having with each other and their collaboration. And I was able to kind of witness how the learning became more authentic because they’re applying it in their own ways,” Vincent said.

Vincent also said that these projects are reserve engineered where they start with the end in mind and work backwards. She said the project is embedded the entire way through a unit.

For Vincent’s class, they’re partnering with the Hardin County Public Library for a project where they develop an anthology of stories and poems. Students were introduced to the project by a video produced by the library after she approached HCPL.

Groups wrote a story based on a theme, and then moved on to poetry where they learn about the process of writing a poem, and then groups write one based on the same theme.

From there, students put together a presentation using evidence from their own work to explain how both pieces relate to the theme.

John Wittenback works at the library and conducts outreach for it. He attended the final presentations by students at Bluegrass. He previously was an English teacher at the school.

Wittenback said it’s important to provide this type of audience to young students since there will be times when people will read their writing outside of the classroom as well as knowing why they’re doing it.

“It gives them more motivation to do well if they understand why they’re actually doing it and how it’s gonna benefit them in the future,” he said.

The end goal is putting all the projects together to be displayed in the public library, going back to that authentic audience and community connection.

Vincent also mentioned sixth-grade science classes that are working on a big project with germs, swabbing different areas of the school to collect samples.

She said she has seen students develop their confidence over the course of the year through collaboration and communication skills. She said this has been necessary especially since those skills were stagnated due to non-traditional instruction during the COVID-19 pandemic.

“I’ve seen a lot of confidence building, which has been interesting. When we first launched the project, there was a lot of students being a little bit unsure of if they were going to be able to do it,” she said.

“There are a couple of bumps along the way so I’m hoping that as we progress through the year and do more projects that I’m going to see those skills develop even more to the point where their confidence is even higher,” she added.