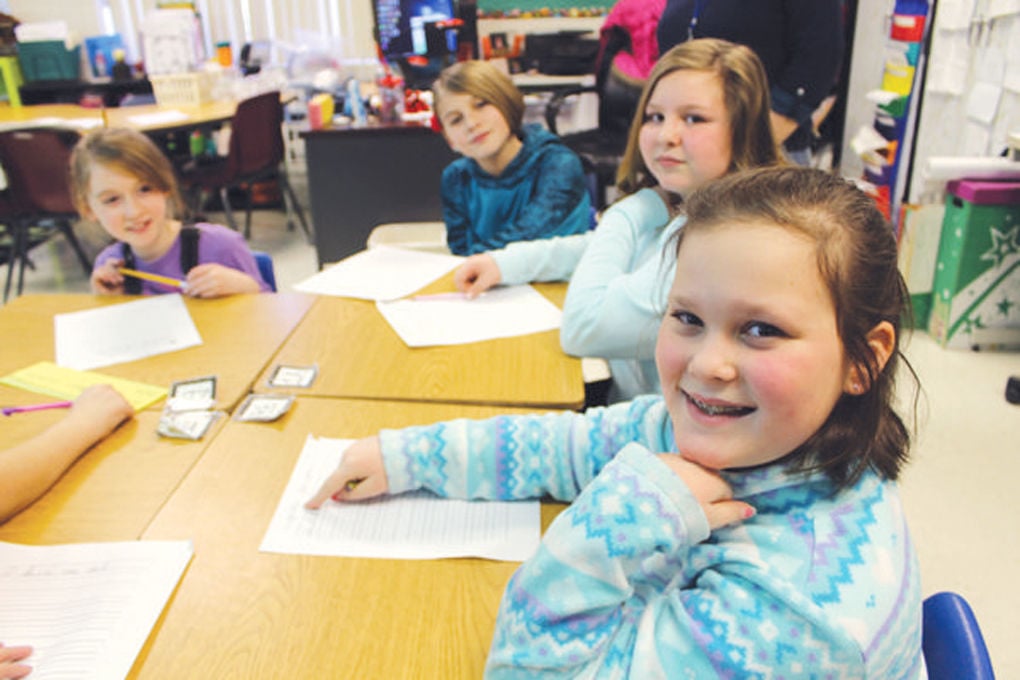 Augusta Gardner points out an example of her penmanship she learned during an after-school club led by teacher Traci Weaver at Hodgenville Elementary School in LaRue County. 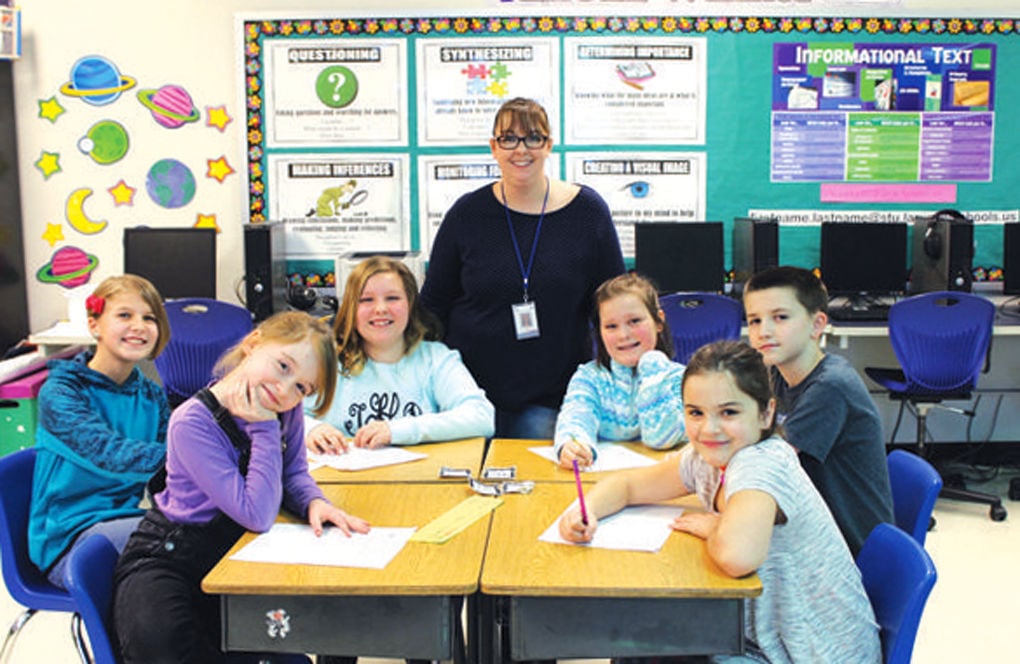 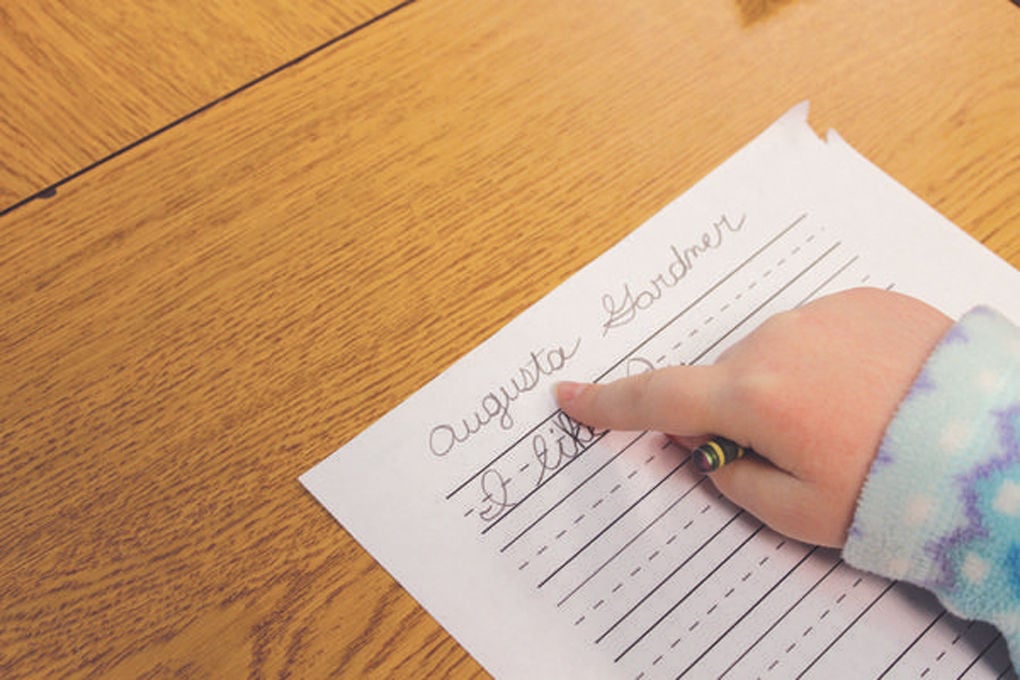 Augusta Gardner shows her cursive signature at a club meeting.

Augusta Gardner points out an example of her penmanship she learned during an after-school club led by teacher Traci Weaver at Hodgenville Elementary School in LaRue County.

Augusta Gardner shows her cursive signature at a club meeting.

When asked what the secret is to writing in cursive, fourth-grader Kaylee Morrow didn’t hesitate.

“Be smart and always use swirls,” Kaylee said.

As the role of handwriting evolves in the increasingly electronic 21st century, a club at Hodgenville Elementary School has been giving students a chance to learn their letters. This fall, the elementary’s after-school cursive club offered third- through fifth-graders instruction and practice in penmanship in a fun setting.

Club organizer and teacher Traci Weaver said the idea for the series came from a personal experience that occurred when her daughter was in middle school.

“Her grandmother had written her a card and she asked, ‘Mom can you read this to me?’” Weaver recalled. “She was 12 years old and I said, ‘I’m not going to read that. You need to read it,’ but she honestly felt like she couldn’t. I didn’t realize until that moment that my own children didn’t know cursive handwriting — it’s just something we take for granted, so that’s why I wanted to bring it here.”

Weaver, who teaches fourth grade and leads a science paper rocket club in the spring, said she decided to offer cursive in the fall to see if there might be interest in the subject. Soon, 16 students had signed up to come twice a week to practice handwriting.

“I picked karate first, but then I erased it and picked cursive,” Kaylee said. “At the end of the club, we wrote a whole letter and my parents thought it was really good.”

Using videos and interactive games, Weaver said she tried to make the club fun for students while teaching them to read and write in cursive.

“I found a YouTube series that went through the letters and then we would practice them. We would also play some games where I would write sentences in cursive and they would quiz each other,” she said. “At the end, we wrote a letter to our parents with everything we learned in the club and parents got to come in and read them. That was a big deal because when the students first came, they hadn’t really written anything in cursive and by then they were writing a lot.”

Student Alexis Edenfield said she wanted to learn cursive so she could write better and spend more time with her favorite science teacher.

“I wanted to learn how to write my last name, and my middle name, and my nickname,” Alexis said. “At first it was a little hard and sometimes I still forget things but I only write my name in cursive now.”

A mode of writing for centuries, cursive was originally invented to enable writers to form letters without lifting a pen. Developed in 1915, the popular Palmer Method was widely taught in the United States until the 1970s, when it was replaced with the D’Nealian Method, which attempted to ease students’ transition to cursive by creating more similarities to print letters. Despite the rise of keyboarding in schools and the modern workplace, Weaver said there still are many reasons for students to learn the skill.

“One of the things that we talked about is that all of our historical documents in the United States — the Declaration of Independence, the Constitution and those kinds of things — are written in cursive,” she said. “It’s something that’s a life skill that you need someday writing your signature on a check and we still need to be able to do that.”

“A lot of people have to sign stuff, so that’s one reason people should learn cursive,” said student Josh Wilson. “And the easiest letter is C because it looks like a C.”

Student Josey Higgs said her favorite part of the club was getting to learn all the letters and learning them with friends.

“I learned how many of the cursive letters are actually the same, but in print they look a little different, and how easy it is to write in cursive,” Josey said.

Weaver said she was impressed with how much the students improved in seven weeks.

“In many ways, handwriting is a lost art; there’ve been too many other things that have taken its place, so I wanted to do my club to give my students more practice and understanding of the procedures and I think they had a lot of fun,” she said. “I did the club to enhance any prior exposure they may have already had and to have fun with writing.”