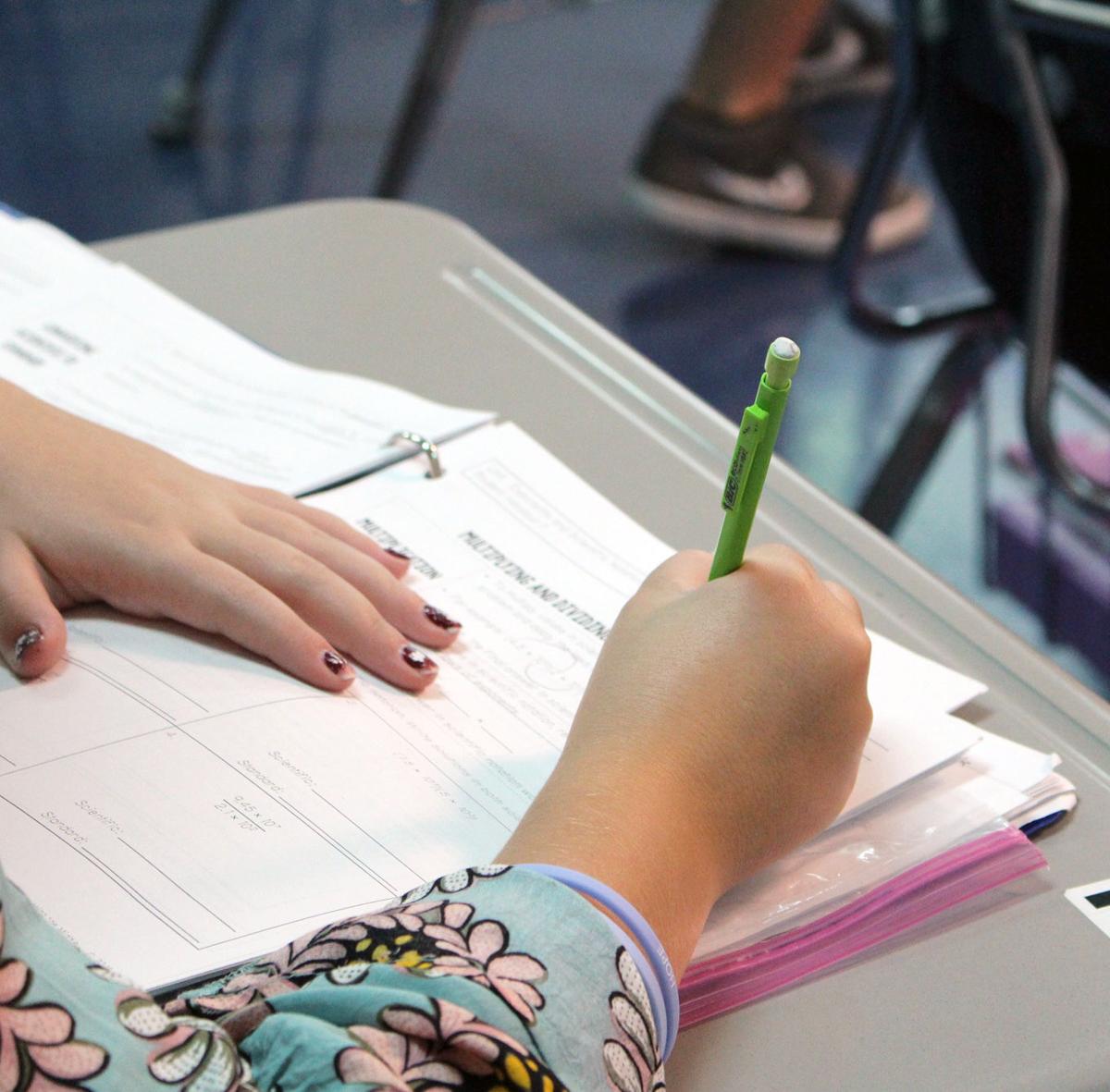 Nearly 20 area schools were identified as needing improvement by the Kentucky Department of Education. The identification was based on the 2017-18 test scores released Wednesday and how different student groups performed on three accountability indicators. 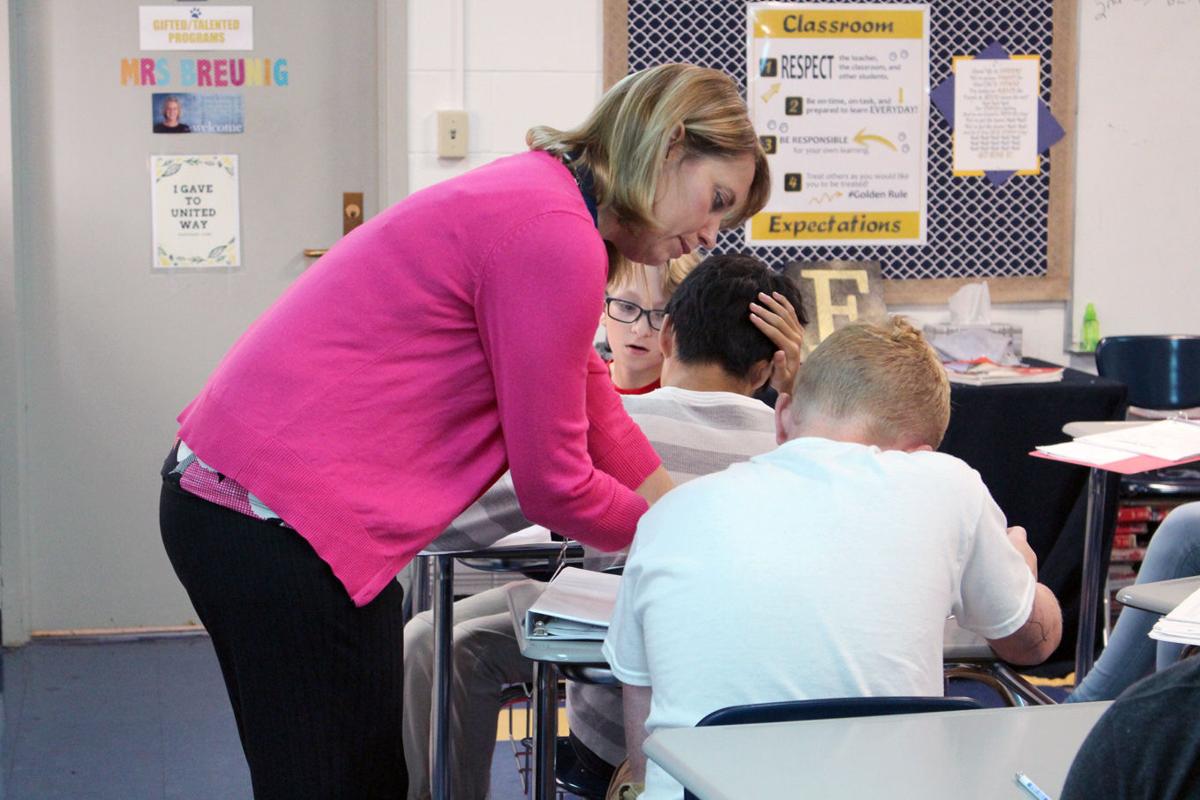 Derisa Hindle, a math teacher at T.K. Stone Middle School, helps a student Tuesday in class. EIS officials stressed the importance of building relationships with students in a review of the 2017-18 state test scores. 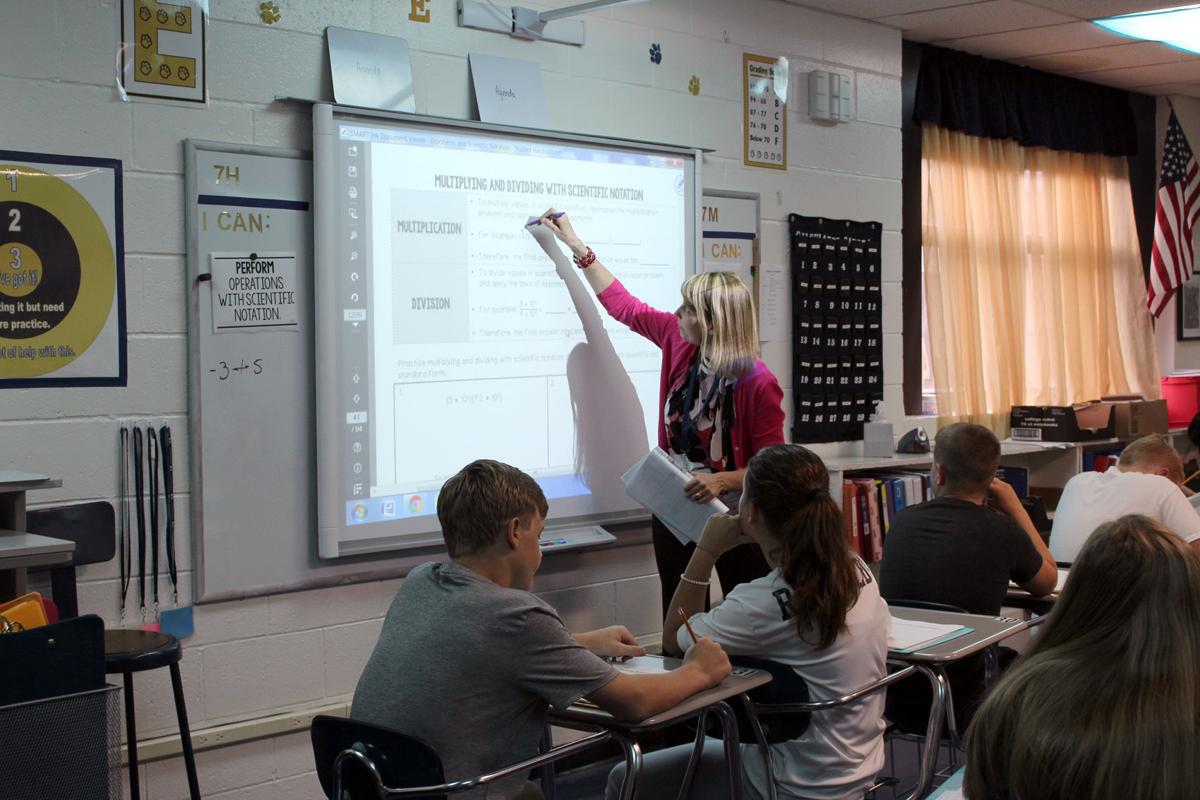 Nearly 20 area schools were identified as needing improvement by the Kentucky Department of Education. The identification was based on the 2017-18 test scores released Wednesday and how different student groups performed on three accountability indicators.

Derisa Hindle, a math teacher at T.K. Stone Middle School, helps a student Tuesday in class. EIS officials stressed the importance of building relationships with students in a review of the 2017-18 state test scores.

Area schools need to improve the academic performance of students with disabilities and other demographic groups, according to the Kentucky Department of Education.

“One thing overall that stands out district-wide that we will dig in and take a closer look at is how we are doing things with our special education students across the district and see what we can do to improve,” said Jon Ballard, superintendent of Elizabethtown Independent Schools, adding test scores are a small but important piece of the overall picture.

The state released 2017-18 state assessment results publicly today and identified the lowest-performing schools and those with at least one student group in need of improvement. School districts received the data Monday morning and still are finalizing it.

Nearly 20 area schools were identified as needing targeted improvements, based on the state’s new accountability model. Radcliff and West Point elementary schools were among the bottom 5 percent of schools at their level. Forty-nine other schools also were in this category, known as Comprehensive Support and Improvement.

Kentucky is transitioning to a new accountability system, so many of the metrics used will be new and not comparable to last year’s data. Similar to last year, the state will not rank schools, issue an overall score or classify schools and districts as “needs improvement,” “proficient” or “distinguished.”

Interim Education Commissioner Wayne Lewis said in a news release that there weren’t many positives in statewide assessment data.

“For the past five years, there has been virtually no movement,” Lewis said. “We are not improving. And achievement gaps between student populations continue to be incredibly disturbing.”

Thirty-seven percent of schools were identified for either CSI or Targeted Support and Improvement, which are new categories this year. Schools that have a student group performing as low as CSI schools will be identified for TSI.

“We have an obligation to do right by the students, and that’s what we will focus on."

Thirteen schools from Hardin County, all of Elizabethtown Indepen­dent, LaRue Coun­ty High School and West Point Middle were identified as TSI. Most schools were identified because of achievement gaps between students with disabilities and their peers.

“(TSI) really emphasizes the importance of name and need,” HCS Superintendent Teresa Morgan said, referring to a district plan to identify the needs of each child.

Morgan said the results show the need for everyone in a school to be responsible for a particular group of students. Additionally, she asked parents to get involved and support the schools.

State education officials said being listed as TSI does not mean a school is failing or low-performing. Rather, a school could be performing quite well, but it has a particular student group that’s not doing well.

Ballard said the district will dig into assessment data on students with disabilities and look at how they can teach reading and math more effectively.

He said at the heart of the numbers are individual students.

“The biggest thing is the ability to form those relationships with each individual student and then test scores will come,” Ballard said. “When I look across our district, that’s what I’m most proud of is the way we treat kids. ... Hopefully, that translates eventually into scores.”

Lewis said in a news release that KDE will provide resources for TSI-designated schools to improve. However, it is the districts’ and schools’ responsibilities to use the accountability results to chart a course for continuous improvement of all students.

The previous accountability system gave schools credit for reducing the number of students scoring at the novice level on state exams.

Kelli Bush, EIS assistant superintendent for student learning, said the district continued to reduce the novice and saw gains in reading and math, according to test scores.

“(That) tells us our systems that we have in place and some of the things we are already doing is working,” she said.

Bush said the district will continue to refine those systems as it adapts to the new system and looks to move schools off the TSI list. However, partnering with the community to help students also will key.

"With many of the challenges that we face with our subgroups, community and parent involvement is going to be so important," Bush said.

In recent years, the district has implemented several initiatives aimed at closing the achievement gap and providing students with additional supports.

“I really do feel like we are doing the right things, and we have the right systems that we are putting in place,” she said.

Starting today, the site-­based council at Rad­cliff Elementary will be suspended and authority transferred to the superintendent because of the school needing comprehensive improvement.

Radcliff scored below the state threshold on all three indicators based on state K-PREP tests taken at the end of the year. New this year, the indicators are proficiency in math and reading, proficiency in science, social studies and writing as well as student growth.

“Flat out, we have work to do,” Morgan said.

In late July, Jacinta Pleasant was named principal at Radcliff Ele­mentary. Morgan said she is up for the challenge.

“She signed on to be principal,” Morgan said. “She is not naive. She knows of their challenges and hurdles that they have to overcome. These test scores did not change that.”

Morgan said she and her staff have met with Pleasant and the administrative team to discuss ideas and strategies. CSI status also includes a state audit and a turnaround plan.

“Their teachers, I can tell you, are working incredibly hard,” Morgan said. “They are putting in more hours to try to meet the needs of those students. So there is a large amount of passion for making great things happen.”

Morgan said the school’s students have many barriers to overcome, and they’ll need parental and community support to get over those hurdles.

“We have an obligation to do right by the students, and that’s what we will focus on,” she said.

Morgan added, “You just do right by students.”

All data for 2017-18 assessment and accountability reporting are available in Open House on the Kentucky Department of Education website.

Kentucky is phasing in a new accountability system that scores schools on three metrics.

HCS’ focus on writing pays off

High school juniors take the ACT in the spring. Below are composite scores for local high schools.

Writing is a complex skill which most students actually need in order to successfully go through college. Because everything is based on writing during academic years, a student who possesses good writing skills will automatically do better at everything. Exams, essays, assignments, and so on.We are able to make good and accurate reports to your research projects also. Our report is having more impressive and successful result for your research projects.The best essay writing service will help to improve academic performance of a student.

It seems as though every four or five years we get a new way or new set of metrics to measure the performance of our schools / students. Because of this we really don't have a good way to judge our schools' performance over the long term.
I am all for better metrics bur I think that in addition to reporting the new metrics, we should also maintain and report the old metrics as well. In this way we will have some idea of where the schools are for a longer period.

Regardless of the metrics used Hardin County Schools in the north end appear to always end up at the lower levels of the ranking. Perhaps we need to change out a bunch of the directors and leaders who have been there a long time and get a new team and charge them with getting serious about the north end of the county.