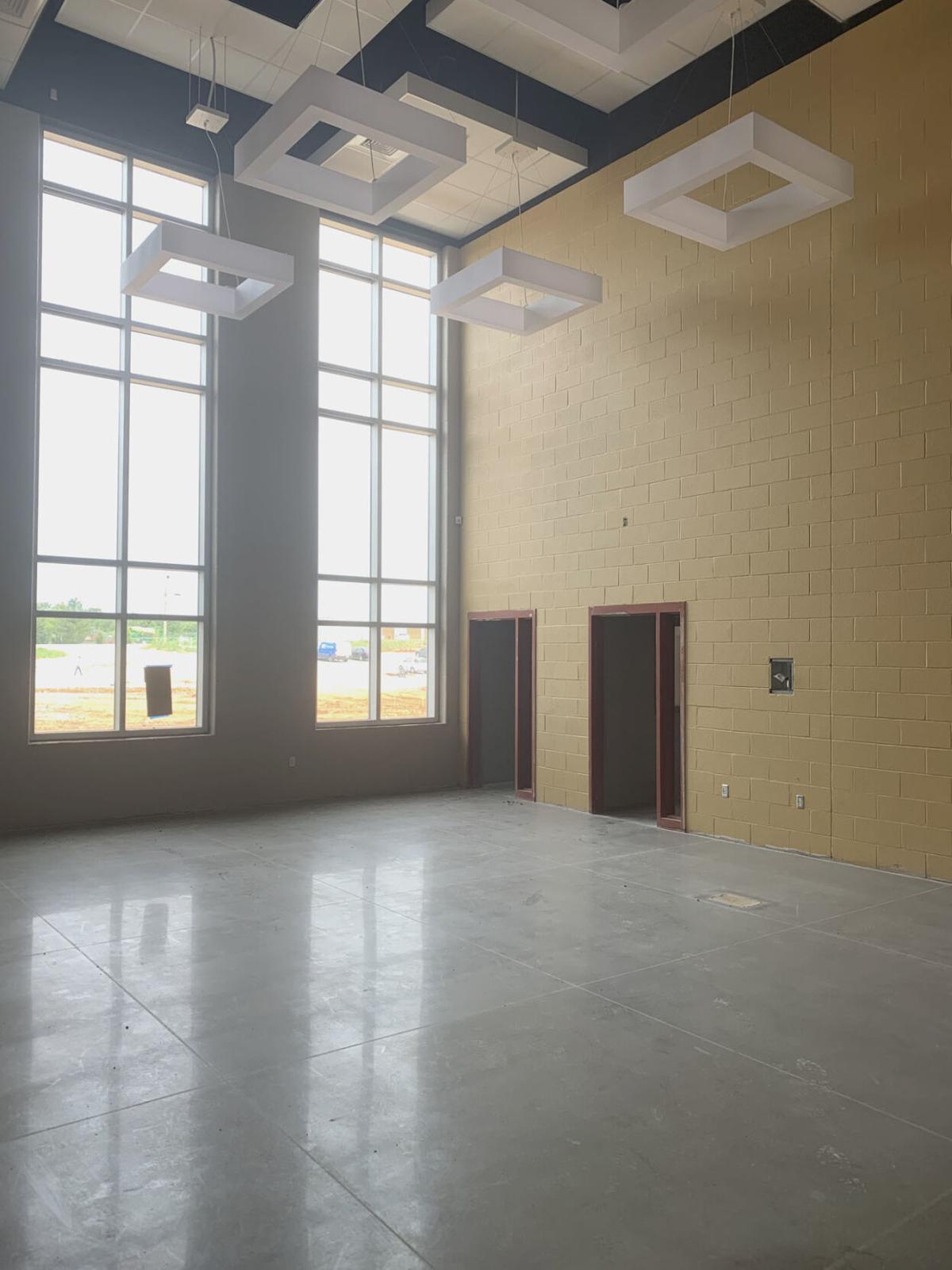 While East Hardin Middle School does not yet have a choir program, a room for choir practice has been constructed in hopes to start one at the new EHMS building on New Glendale Road. The building has most of the skeletal structure finished with hopes to open for the upcoming school year. 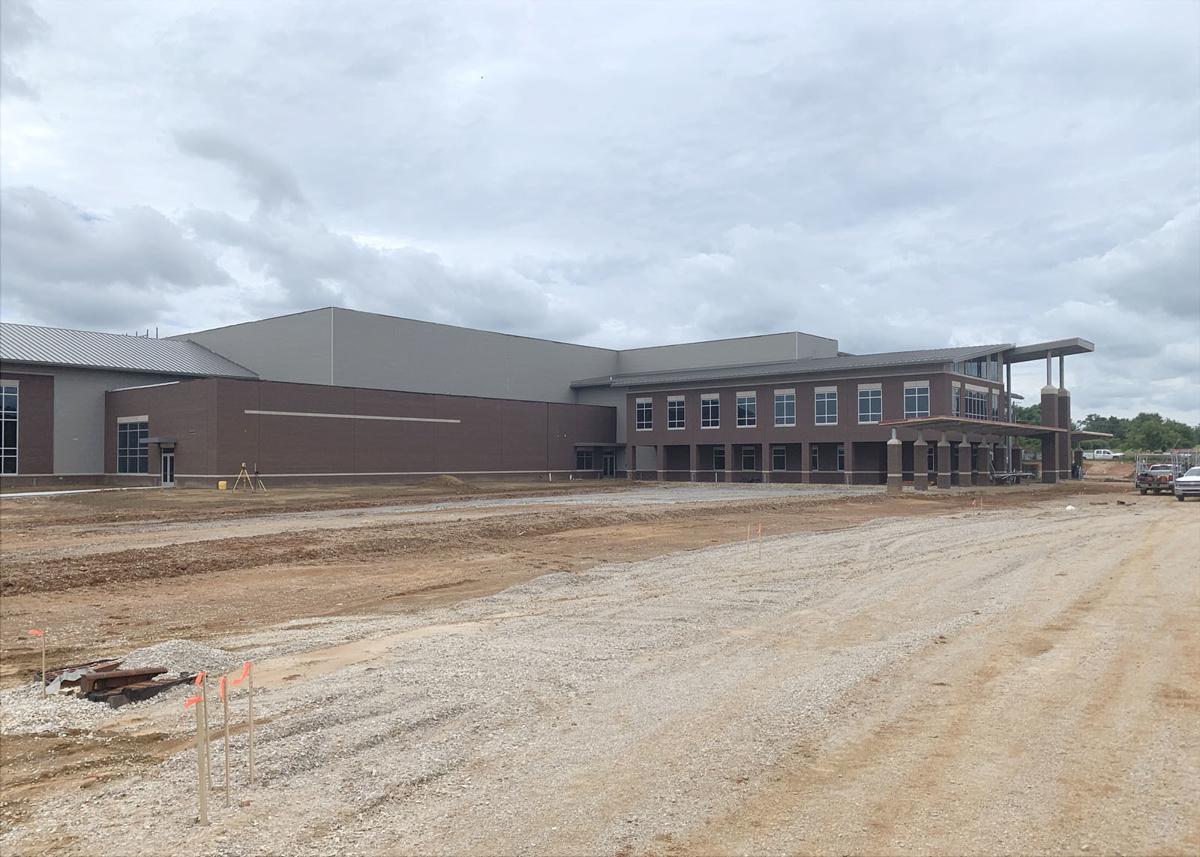 The outside front of the new East Hardin Middle School building Tuesday while construction workers work inside and out. John Stith, chief operations officer for Hardin County Schools, said the weather has made it difficult to work on some outside projects including the parking lot and sidewalks. 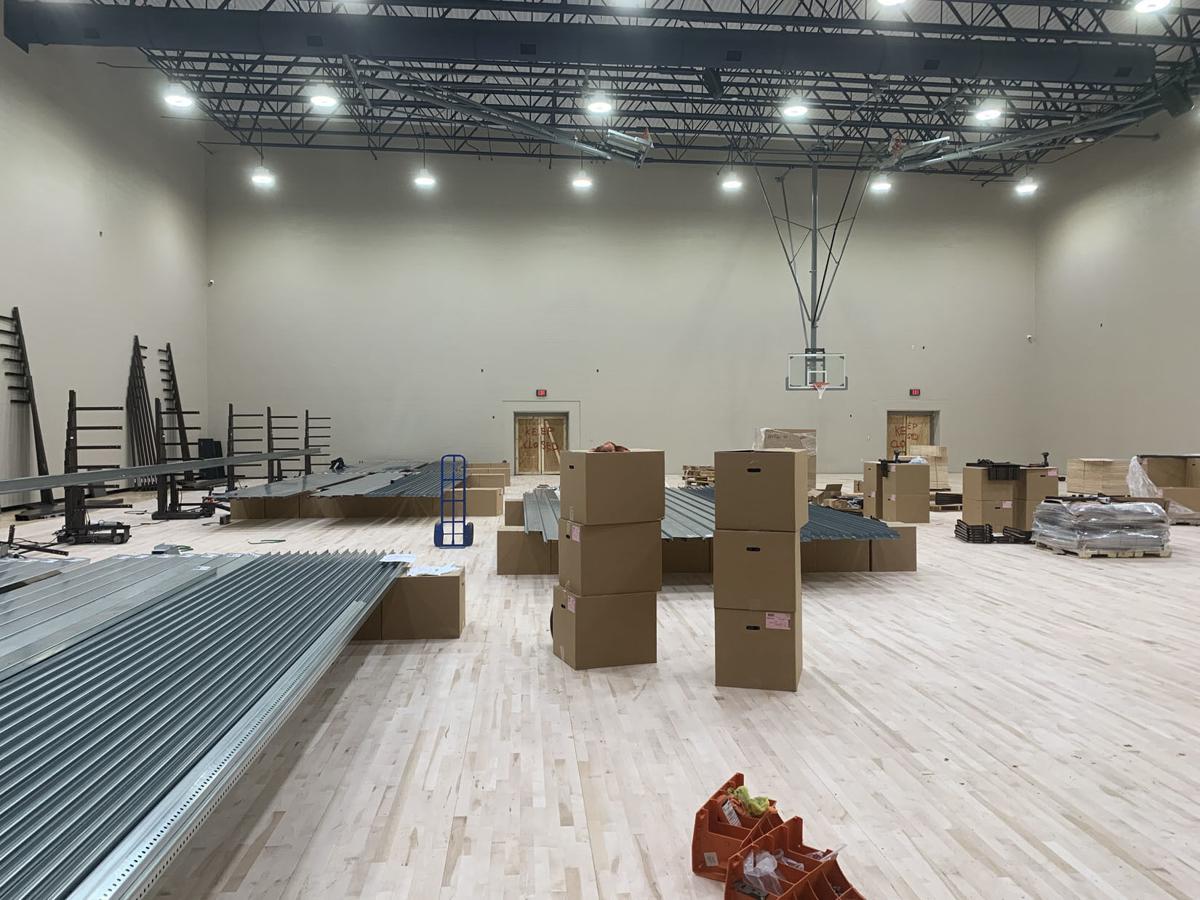 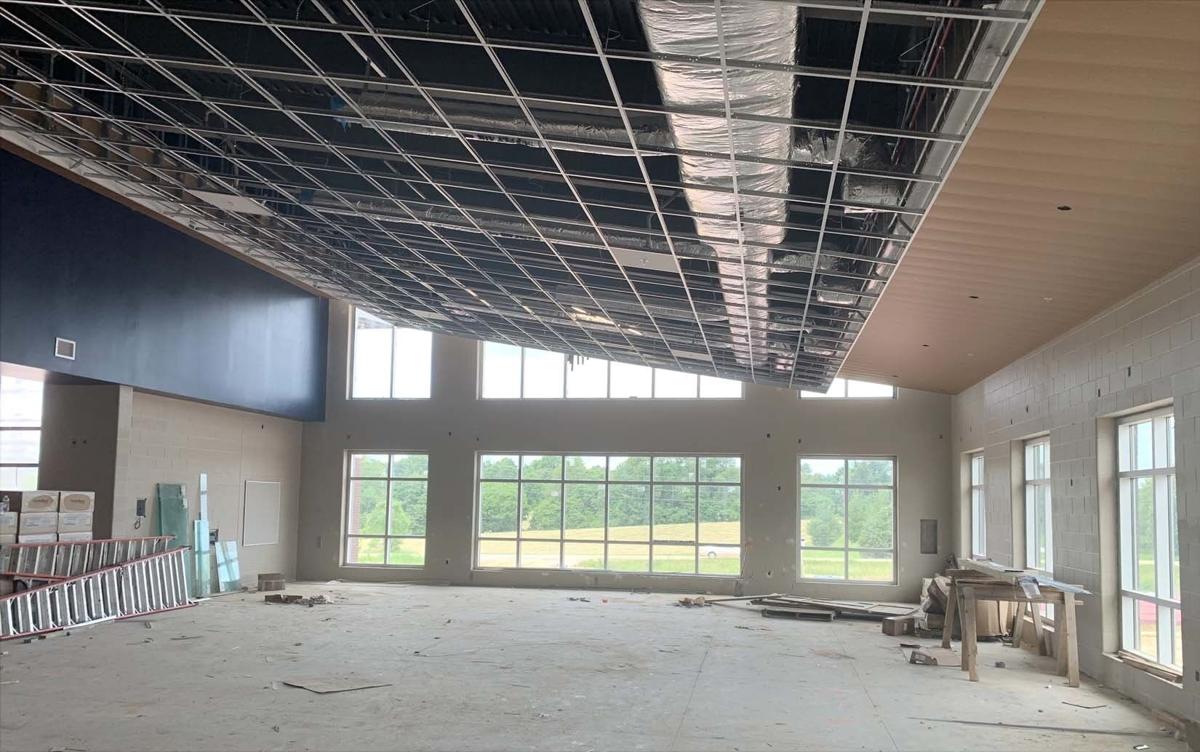 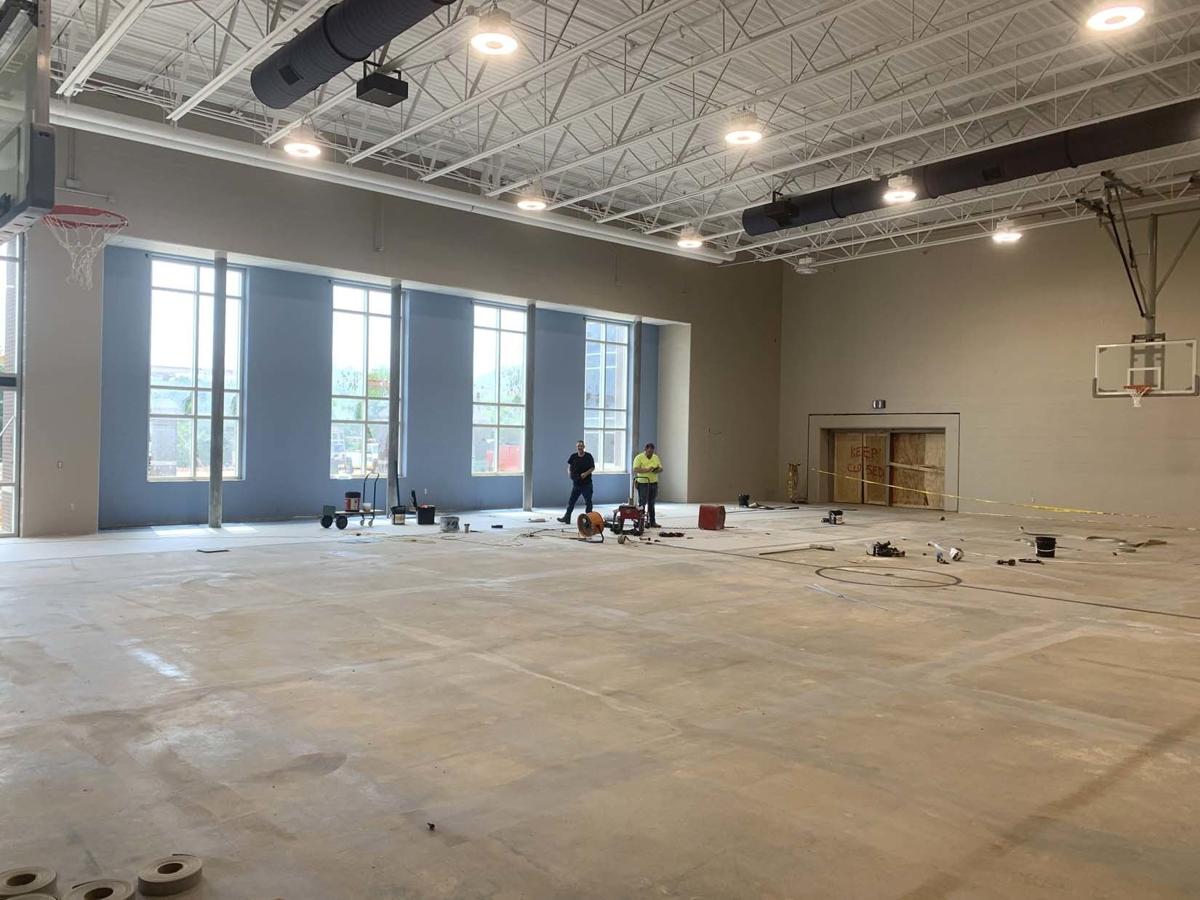 While East Hardin Middle School does not yet have a choir program, a room for choir practice has been constructed in hopes to start one at the new EHMS building on New Glendale Road. The building has most of the skeletal structure finished with hopes to open for the upcoming school year.

The outside front of the new East Hardin Middle School building Tuesday while construction workers work inside and out. John Stith, chief operations officer for Hardin County Schools, said the weather has made it difficult to work on some outside projects including the parking lot and sidewalks.

Construction of the new East Hardin Middle School on New Glendale Road is nearing completion as much of the main structure of the building is finished.

John Stith, chief operations officer for Hardin County Schools, gave a tour of the building Tuesday as workers made their way through hallways finalizing wiring and paint.

The building is split into two halves. The left half when looking at the front of the building contains “special” classrooms such as art, music and the gymnasium, along with the cafeteria.

Stith said recently, the rain has affected construction of the outside parking lot and sidewalks. He said if the weather cooperates, the outside areas should be more formed in the next two weeks.

The parking lot has two entrances, one for buses and the other for car riders, which are identical in appearance at the $24 million school. Parking lots also exist in the back and front of the building, with visitors needing to park in the front. Stith said this organization will help to spread out and organize traffic.

As opposed to the former school in Glendale, the front entrance is more secure, including a vestibule with locking doors to help control the flow of visitors.

Other outside facilities include bleachers next to a football field and a possible mini-concession area. Stith also said the district owns land on the other side of the football field which potentially could be used for softball and baseball fields, but nothing has been decided.

The right side contains more typical classrooms and are separated into three wings for sixth, seventh and eighth grades, with classrooms on both floors.

The cafeteria also will double as a second gymnasium for practices. A dedicated nursing station is connected to the hallways for easy access.

Stith said one of the major differences between the schools are bathrooms. The new building has more bathrooms on both floors. He said the former building had a floor without bathrooms, with students having to go to downstairs to use one.

The new building also has a family resource office with dedicated entrance for use by students and families.

The hallway floors of the school are polished concrete, which will help custodial staff to clean and maintain.

Rooms for art, band and choir contain special lighting and shapes to help accommodate for those activities.

Stith said the air conditioning units will be on a separate small floor that’s contained indoors. He said while the upfront cost of this is more expensive, it’ll be quieter, more energy efficient and is easier for custodial staff to replace air filters. Also, because the unit is not outside and exposed to the elements, it should last longer.

Classrooms will have large interactive panels for teachers and students that essentially will replace projector screens. However, classrooms also have white boards.

A room on the right side of the school will be used for VEX Robotics, STEM projects and other projects similar to those for students to work and create.

On the second floor of the right side along with classrooms, is a second administration suite for counselors and the assistant principal so that support staff are in that area of the school instead of everyone being situated in a front office.

The school’s new media center will have the latest technology and computers along with “book nooks” which will be separate areas for students to do independent studying.

Stith said problems have arose with the construction over the past year, including one masonry contractor that had to be replaced after becoming behind because of the COVID-19 pandemic, which put the entire project behind and bumped the original finish date from December 2020.

He said unusual shortages in materials, including a spray insulation foam, caused workers to find alternatives or wait long periods of time to receive products.

Stith said they plan to open the building for student and staff use by the time the new school year begins Aug. 12, even if the building isn’t 100 percent completed.

“We’re really excited for our kids, excited for the staff. I think it’s gonna be a great place to learn,” he said.