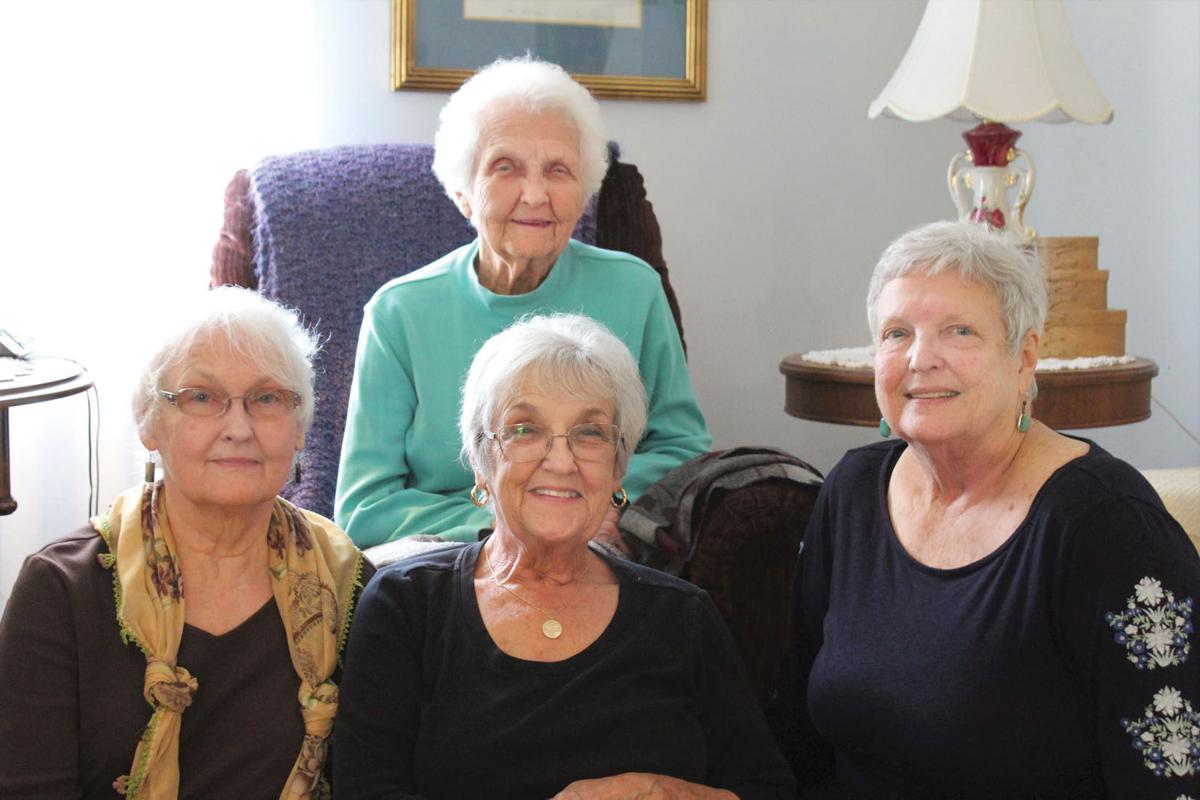 Elizabeth Joiner Eichem, back, is shown with with her daughters, from left, Charlene Bharadia, Lynda Pottinger and Mary Hutchinson. 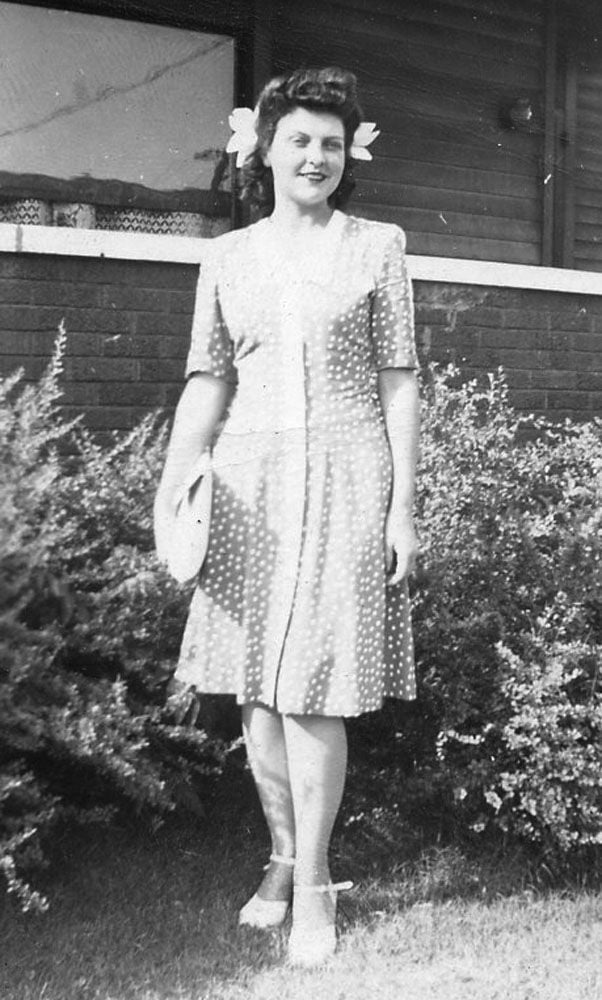 Elizabeth Joiner Eichem is shown during the time she worked at a P-47 factory during World War II. 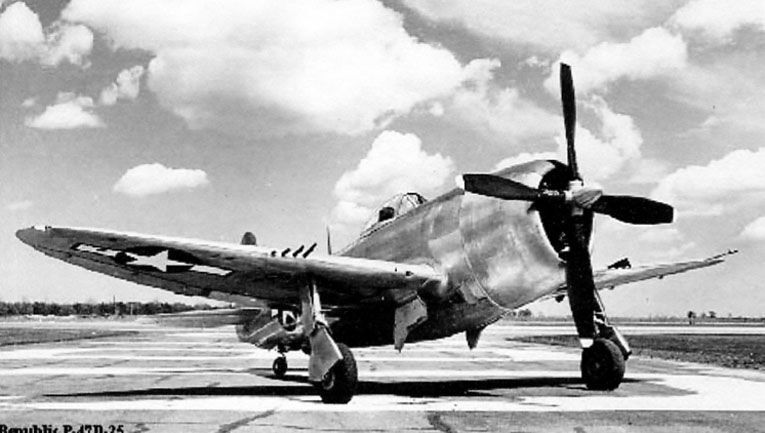 The P-47 is the plane Elizabeth Joiner Eichem helped build during WWII.

Elizabeth Joiner Eichem, back, is shown with with her daughters, from left, Charlene Bharadia, Lynda Pottinger and Mary Hutchinson.

Elizabeth Joiner Eichem is shown during the time she worked at a P-47 factory during World War II.

The P-47 is the plane Elizabeth Joiner Eichem helped build during WWII.

Elizabeth Joiner Eichem and her three daughters Mary Hutchinson, Lynda Pottinger and Charlene Bharadia gathered at her Elizabethtown home to talk about her life — close to a century of it.

Eichem, a member of the American Rosie the Riveter Association, turns 100 on Monday.

“It ought to be breathing at the door right now,” she said of her 100th birthday. “It’s been after me for a while but I keep one step ahead.”

During World War II, Eichem did what many women on the home front did and went to work.

She worked at a factory in Evansville, Indiana, and said she worked on the left wing of the plane.

Eichem said the planes would fly around the troop carriers as they went overseas.

“They went like bees on each side,” she said. “We fought them off with the little P-47.”

She used the money she made to help her family back home. The rocking chairs currently on her front porch are the ones Eichem bought for her parents during WWII.

Hutchinson said her daughter-in-law’s grandfather flew a P-47 and said it was a favorite plane of the wartime pilots.

Eichem doesn’t see herself as a piece of history.

“It was just what everybody was doing at that time,” she said. “I didn’t feel special in no way. It was my job.”

She may not see it as anything more than her duty, but her family sees her part in WWII as important.

Each daughter, and some of her granddaughters, has a Rosie the Riveter poster in their homes to honor Eichem.

“Mother has been our inspiration,” Hutchinson said. “Mother’s generation was known as the best generation because they were hard workers and did what they had to do.”

Most of the men went into the service and the women stepped up to do things they had to do, she said.

She married Charles Eichem in 1945 and had three daughters and a son.

Hutchinson said her mother grew up on the land and was the daughter of a sharecropper. She’s always remained active, worked hard and rocked a lot of babies in her life, she said.

And, up until a few years ago she cut her own grass, with a push mower.

Everywhere she went her daughters went with her, and, their brother C.W. didn’t want to be left out.

When the daughters had teenagers, their mom gave them some advice.

“All I know to tell you it’s like driving on a newly graveled road,” Hutchinson said her mother would tell her. “If you don’t drive steady you’re going to fall in the ditch — just hold on tight, take it slow and easy and keep going on.”

“She has a backbone of steel wrapped up in giggles, hugs and lots of love,” Hutchison said. “But don’t mess with her.”

All three girls said they knew when they saw their mom’s eyebrow go up she meant business and they needed to straighten up. But she never had to raise her voice, she just gave them the look.

The girls said their mom also was an expert seamstress.

Eichem said that it always made her feel good when someone would come up to her saying they couldn’t wait to see what her daughters were wearing because she made good clothes.

“She can look and feel a piece of fabric and see what the fabric is going to be,” Pottinger said.

Eichem worked in a sewing factory to help them get through school.

The daughters said they respect their mom for a variety of reasons.

Pottinger said her mom has a very strong faith and still has a bit of a kid in her, saying she likes to giggle and plays jokes.

Hutchinson said she always taught them to have an imagination and keep going. When she taught them how to sew, they were not allowed to leave in a bad seem — it had to be done correctly.

“She taught us the value of doing things right and to keep going until it was done right,” Hutchinson said. “Don’t quit is a big message from mother.”

Bharadia said their mother was the type of person you didn’t want to disappoint.

“One of the things that will always stick out with me, in my mind, is mother’s ability to discipline me in such a quiet way,” she said.

It wasn’t about getting in trouble; they had such respect for their mom they didn’t want to disappoint her, they said.

The family will celebrate her birthday the way it has celebrated throughout her 100 years. A big bonfire and hot dog roast is planned as well as her favorite chocolate cake.