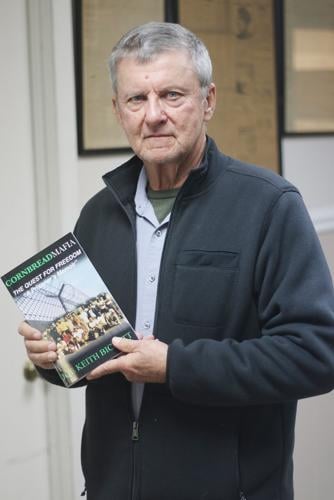 Joe Keith Bickett, one of the leaders of the Cornbread Mafia, has written his third book on his quest for freedom. He served more than 20 years in prison for growing marijuana. 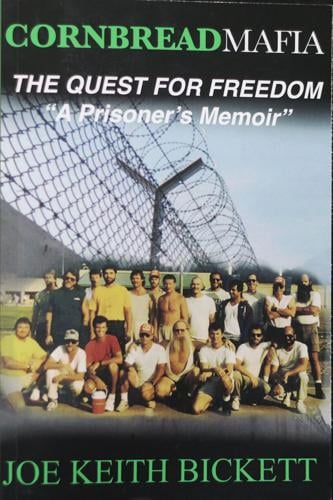 Joe Keith Bickett’s latest book “Cornbread Mafia — The Quest for Freedom” is now available. It is his third book on the infamous group of country boys who formed the largest marijuana-growing syndicate in America.

Joe Keith Bickett, one of the leaders of the Cornbread Mafia, has written his third book on his quest for freedom. He served more than 20 years in prison for growing marijuana.

Joe Keith Bickett’s latest book “Cornbread Mafia — The Quest for Freedom” is now available. It is his third book on the infamous group of country boys who formed the largest marijuana-growing syndicate in America.

Joe Keith Bickett has never killed anyone nor has he robbed a bank or physically harmed anyone.

But for the crime he committed, he served more time in prison than most people convicted of those crimes, including the man who shot and killed his sister and brother-in-law and then set their home on fire.

Bickett was sentenced to a mandatory 25-year sentence for doing something some rural Kentuckians have done for years.

He and several friends were farmers.

Unfortunately, their cash crop was marijuana and they were arrested at a time when the federal government was getting tough on weed.

“They treated marijuana back then like any other drug like cocaine or heroin,” Bickett said. “Of course, now you have today’s trends kind of coming full circle where the feds are prosecuting very few marijuana cases, and it is legal in some states.”

Bickett, a member of the infamous Cornbread Mafia, in his recently released book “Cornbread Mafia, The Quest for Freedom,” details what is was like to spend 21 years and nine months in prison.

It is his third memoir about a group of country boys whose escapades have become folklore.

The story begins as he sat in a jail cell in the United States Prison in Leavenworth, Kansas.

“We federal prisoners had barely enough room to move in the antiquated cells in this old and dilapidated brick cell-house unit that had been built around 1895,” Bickett said.

He describes learning to live with his freedom taken away. For a man from Raywick who was used to spending time outdoors, he soon learned the key to living in custody.

For those 27 years, he was told what to do, when to do it and how to do it. One wrong move or saying the wrong thing to a guard or even a look someone didn’t like could result in time in the belly of a prison.

As he was moved from one prison to another, Bickett tells the story of being handcuffed with a chain around his waist to the shackles on his ankles.

“There were marshals surrounding the plane in Kansas City we were boarding,” he said. “They had shotguns with high-powered rifles with various amounts of bullet-proof attire, all looking stern and ready to shoot at the slightest disturbance. It was pretty [bad] to say the least.”

What made the captivity a little more bearable was seeing various members of his group at some of the locations. Bobby Joe Shewmaker was in Leavenworth at the same time. “Sonny Boy” was there when Bickett arrived in Atlanta. Tommy Lee was there when he was transferred to Ashland. He was reunited with his brother Jimmy, Johnny Boone and a host of other men from the Marion County area when the prison in Manchester opened.

Seeing friends at those locations, some of whom worked in areas that were what the prisoners consider the best ones, enabled Bickett to nab positions in the commissary and the business office as well as the kitchen. He also did carpentry work.

With the amount of time behind bars, it gave him time to reflect on what he had done.

“I thought of my kids, girlfriend and family,” he said. “Even despite all the negative, I still had hope and faith that somehow, I would get all of this turned around.”

He discovered the identity of the person who gave law enforcement officials information that led to his arrest and conviction.

“By that time, she was dead,” Bickett wrote. “There were some other names, but it was time to let it go. Life is too short to constantly reflect on the negatives in our lives. It was time to move on.”

His parents, family and friends visited with him, and so did his girlfriend, at least for a while.

“We had a visit planned on Sunday, and I called her apartment to see if she had left yet,” Bickett said. “The phone rang three times and then a sleepy male voice answered. I knew then it was over.”

Many of the prisoners spent their spare time exercising and playing ball. There were the usual fights and noises of sex in each location. But at other times, there were humorous pranks to keep the mood light.

Prisoner counts were a regular part of the day for the inmates, and Bickett recalled one prisoner who hid under a bed when the count was being done. When the guard came back by to do a recount, the man was back in the line. He repeated his antics a few more times.

He remembers vividly the day his sister and brother Jimmy’s girlfriend and son came to Manchester to tell them his sister Trish and brother-in-law Rick had died.

“When it came time for the funerals, Jimmy and me were told that only one of us could go,” he said. “We talked about it and decided neither of us would go. We knew that we would be shackled and handcuffed during the funeral, and we decided we just didn’t want to add to our mother’s and father’s grief.”

They chose the same route when his father passed away the following year.

Bickett spent many days in the law libraries in the prison, typing out legal briefs, oftentimes on a manual typewriter, to try to get his convictions overturned. He did the same for other prisoners. He had hoped his sentence might be shortened, but it never happened.

“I went through this correspondence course called Blackstone School of Law out of Texas, and I got a correspondence degree through them as a paralegal,” he said. “As a convicted felon, I am not allowed to be a lawyer.”

Preparing to return to the real world

When he learned he was going to be released — his sentence was shortened for good behavior — Jimmy Bickett asked Lebanon attorney Elmer George if he would hire Joe Keith as a paralegal. (Editor’s note: Elmer George and Dennis George are brothers.)

“Elmer jokingly said, ‘if he couldn’t get either one of you released, why would I hire him?’ ” Joe Keith wrote.

He has worked in the law office since returning to Lebanon and one of his proudest moments was when he worked with George to get a shortened sentence for Johnny Boone after he was caught in Canada after being on the run for several years.

Feb. 11, 2011, 21 years after he walked into a prison, Bickett finally walked out of one as a free man. He went to a halfway house for nine months, and as his family took him there, he was scared to stop to eat, lest the car break down or they be late arriving there, only to be sent back to prison.

He had to learn to drive a car and to adapt to a world that had changed so much while he was there.

“When you get out into the free world, you have his transition period that you go through, getting back into making your own independent decisions on everything,” he said. “It takes a while and I was very fortunate I had a lot of support and family friends.”

He and Boone have used their cannabis expertise to form a company that sells CBD. They have been contacted by people all over the country asking for information.

Bickett has learned that members of the Cornbread Mafia are not outcasts as a result of what they did.

“Me and Bobby Joe and Jimmy went up to the Bluegrass Community Bankers Association Annual Conference and they really enjoyed our discussions on their program,” he said. “A lot of the bankers came up to us afterwards and I knew people from their areas (from being in the Cornbread Mafia).”