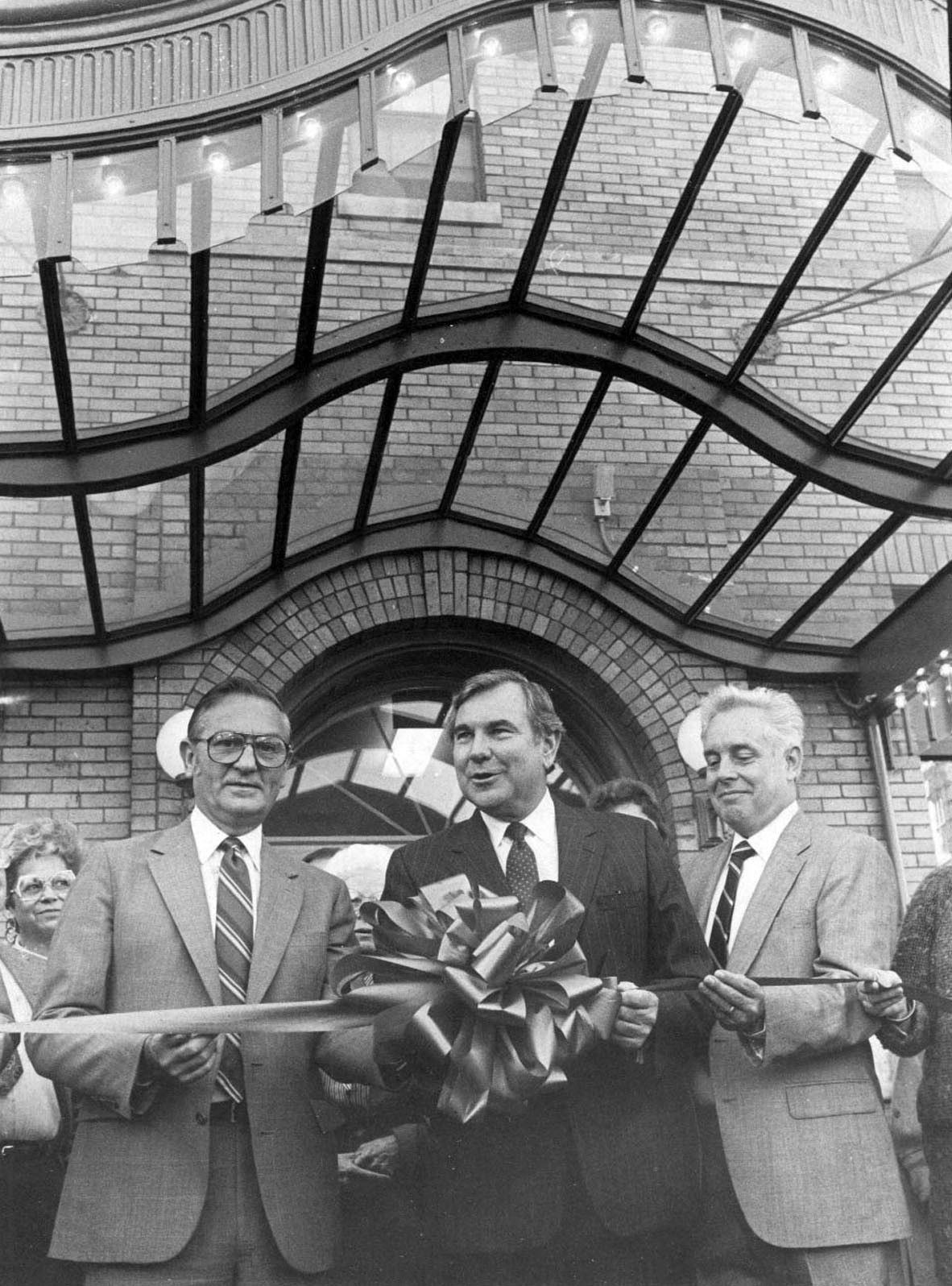 Walter D. Huddleston celebrated the renovation of a downtown hotel as a public housing project on the square in Elizabethtown. It was named Huddleston House in his honor in 1985. He is pictured with Mayor Mike Carroll and Max Peake, who was head of the housing authority. 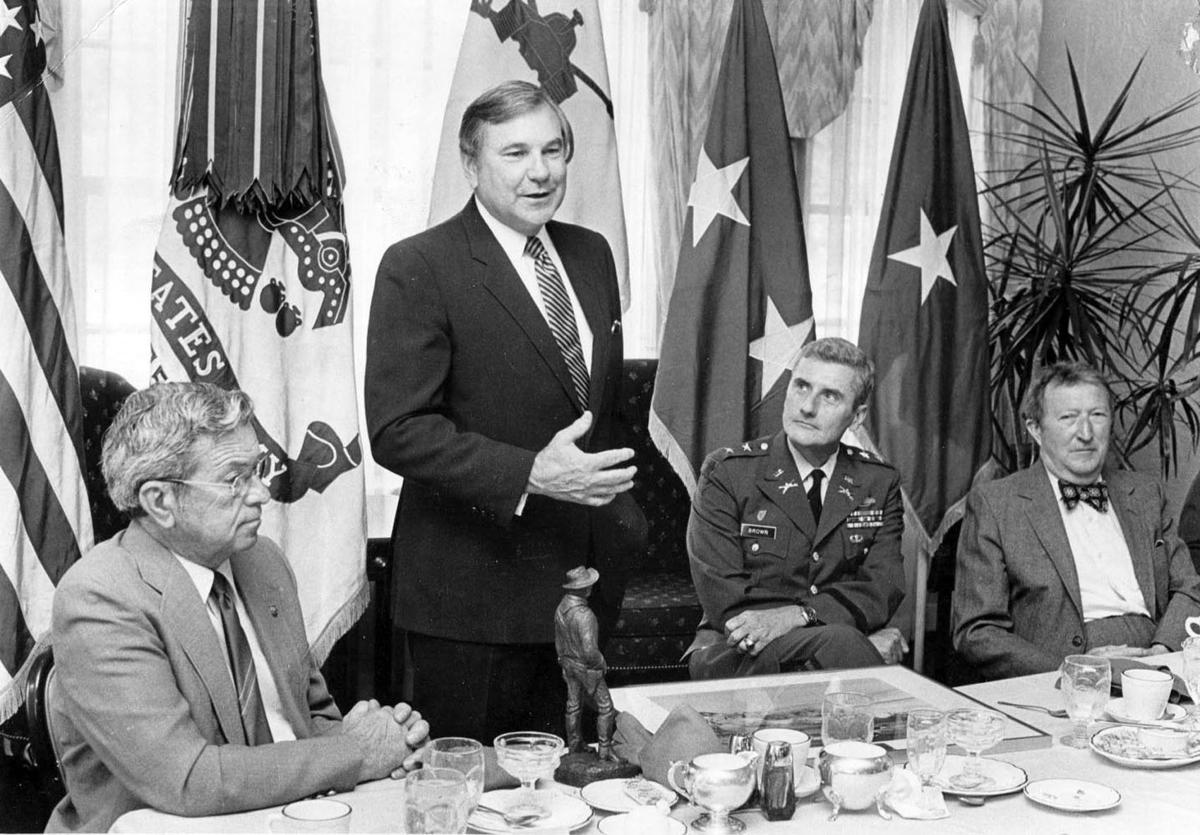 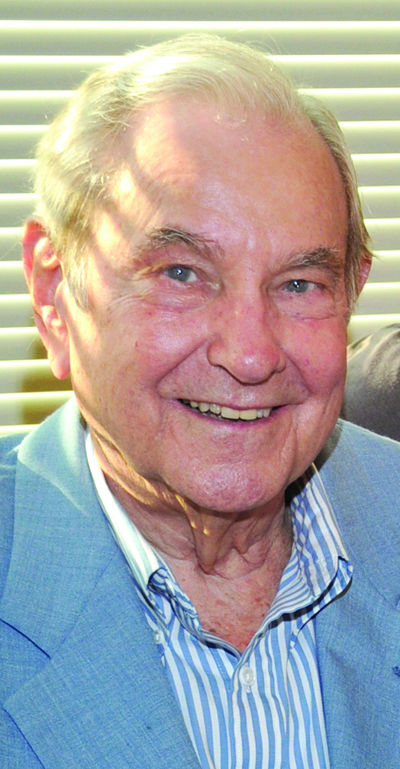 Walter D. Huddleston attended the 50th anniversary celebration of Central Kentucky Community Foundation in 2010. As a legislator and founding member of the foundation's predecessor, he played a key role in the creation of what's now known as Elizabethtown Community and Technical College.

Walter D. Huddleston celebrated the renovation of a downtown hotel as a public housing project on the square in Elizabethtown. It was named Huddleston House in his honor in 1985. He is pictured with Mayor Mike Carroll and Max Peake, who was head of the housing authority.

Walter D. Huddleston attended the 50th anniversary celebration of Central Kentucky Community Foundation in 2010. As a legislator and founding member of the foundation's predecessor, he played a key role in the creation of what's now known as Elizabethtown Community and Technical College.

Walter D. Huddleston’s low-key manner, smooth vocals and leadership skills brought him popularity on the radio and eventually positions of power in Frankfort and Washington, D.C. The two-term U.S. senator, unseated in part by a legendary attack ad, died Tuesday at age 92.

A broadcaster and businessman, Huddleston served his adopted hometown of Elizabethtown in public office and community leadership positions.

“It’s hard to say how many lives he impacted in a very personal way — mine among them,” said Joe Prather, who spent 21 years in the state legislature and succeeded him in his state Senate seat after Huddleston was elected to the U.S. Senate in 1972.

Huddleston had been a founding member of the North Central Education Foundation, which championed the establishment of what now is Elizabethtown Community and Technical College. He also served for decades on the board of First Federal Savings Bank, including 15 years as its chairman.

After being defeated by Mitch McConnell in his 1984 re-election bid for the Senate, Huddleston spent decades as an executive at a Washington, D.C., consulting firm. He continued to call Elizabethtown home.

In ill health the past several years, Huddleston died in his sleep in the Gallatin County home of his son, Steve.

Steve Huddleston said his father embodied “the quintessential 20th century American story,” living through the Great Depression, serving as a tank gunner in World War II and getting his education at the University of Kentucky thanks to the GI Bill.

“He was a man of high intelligence and had a reasoned approach to life, and he conducted himself with great dignity and in a way that brought honor to himself throughout his lifetime,” his son said Tuesday in an Associated Press interview.

Huddleston’s life included rare experiences, ranging from serving as announcer for the initial University of Kentucky sports broadcasts before a statewide Wildcat Network took shape and leading a rare tour of the U.S. Bullion Depository at Fort Knox in 1974 in response to rumors that the Gold Vault was empty.

“I genuinely admired and appreciated him,” said Keith Johnson of Robbins Enterprises, who was the long-time president and CEO of First Federal and looked upon Huddleston as a mentor. “He never met a stranger. He was such a gifted man and he tried to treat everyone equally and fairly.”

Prather, who served in the state House during Huddleston’s tenure in Frankfort, talked about the respect Huddleston held among his colleagues, which was highlighted by his selection as majority floor leader.

Huddleston’s influence also grew through a long association with Wendell Ford, who served as lieutenant governor and later governor during that era. Huddleston and Ford had met years before through their involvement in the Jaycees civic organization and later served together as Kentucky’s two U.S. senators.

The son of a Methodist minister, Walter Darlington Huddleston was born April 15, 1926, in Cumberland County. Known to most everyone simply as Dee, he married his high school sweetheart and launched a career in radio, which brought him to Elizabethtown in 1952 to become the third general manager of radio station WIEL, which was founded in 1950.

Paul Urbahns, a local historian who worked part-time at the radio station while assigned with the U.S. Army at Fort Knox, recalls Huddleston spending some weekends catching up on paperwork at the station.

“He was a very dedicated manager and he always had a smiling face for people,” Urbahns said.

Huddleston served as the station’s manager until November 1972, when he resigned following his election to the U.S. Senate. A Democrat, Huddleston defeated Republican Louie B. Nunn, the former governor, to win the Senate seat.

McConnell pulled off a narrow statewide victory and the ad often is credited with ushering in the generation of attack ads now common in legislative politics.

Huddleston never attempted to counter the bloodhound ads and much later acknowledged that as a strategic error, but Prather sees it as typical of Huddleston’s character.

“There were some things Dee Huddleston wasn’t willing to do, even to get re-elected,” Prather said. “Those types of high-powered attack ads were not in his arsenal.”