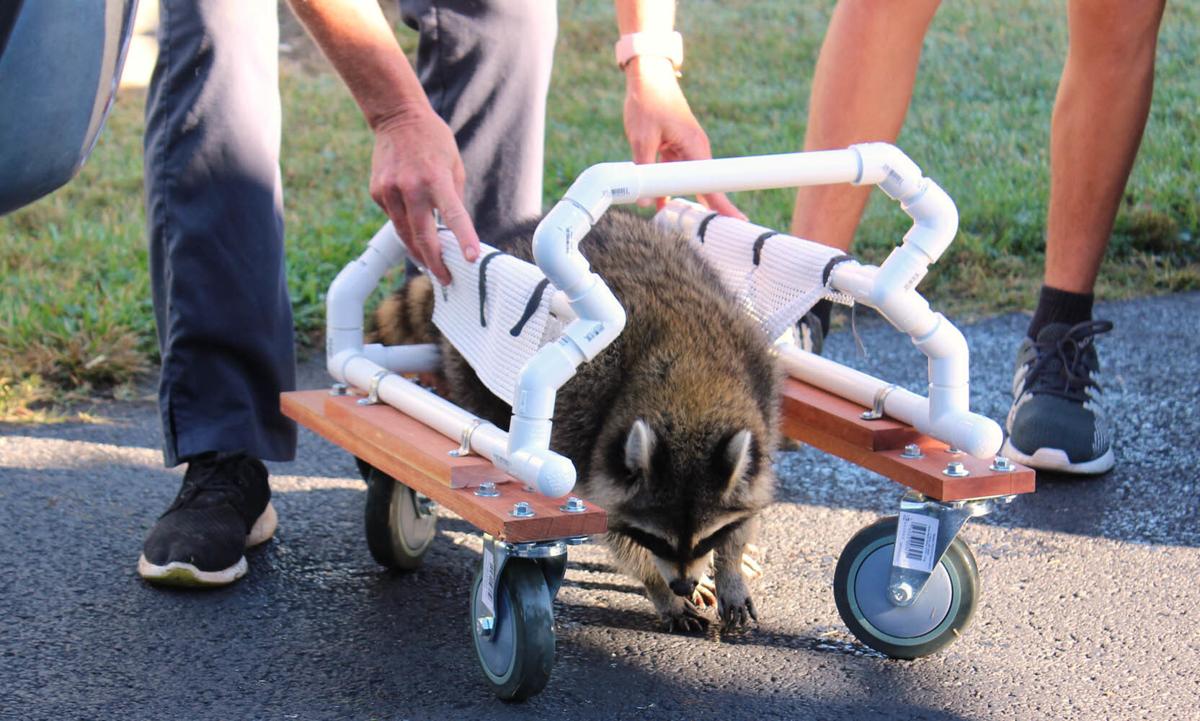 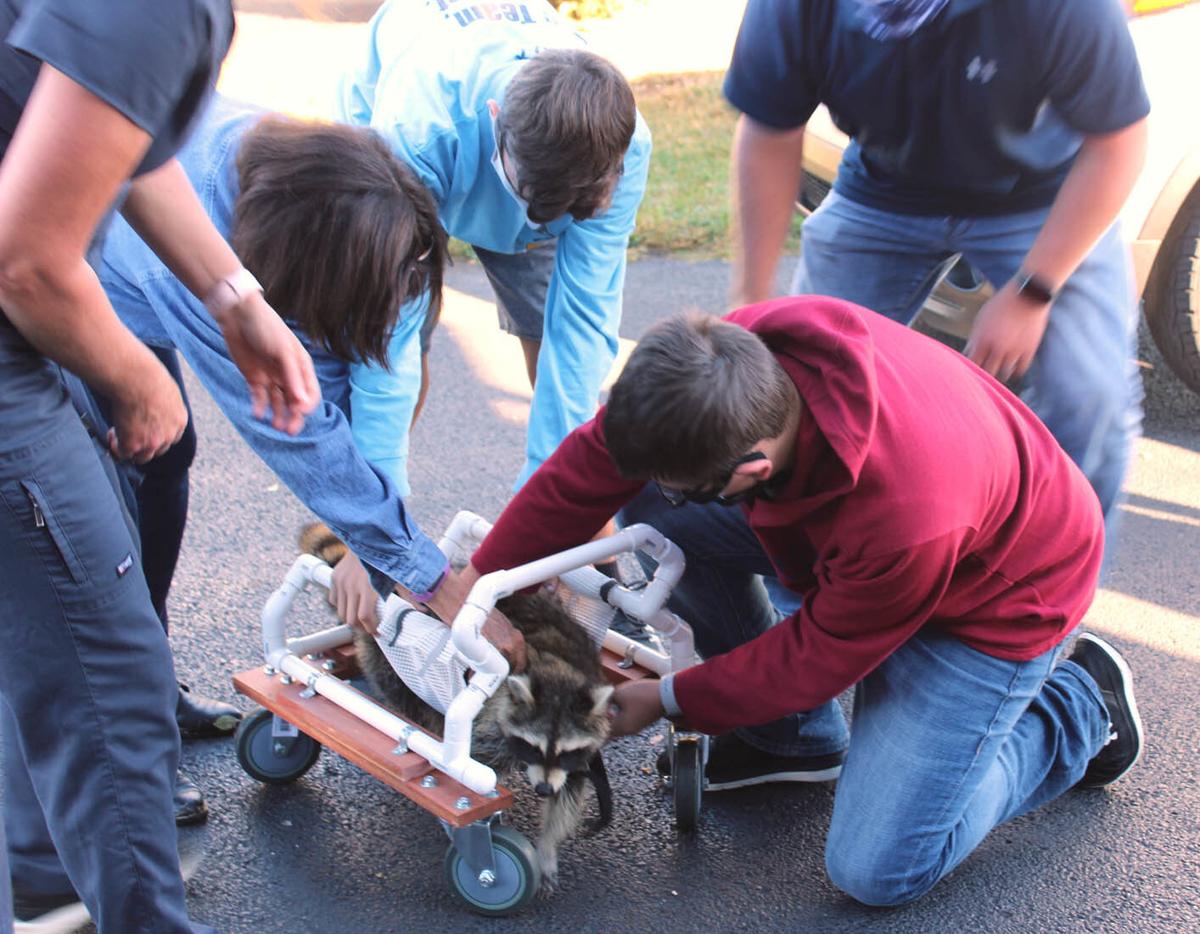 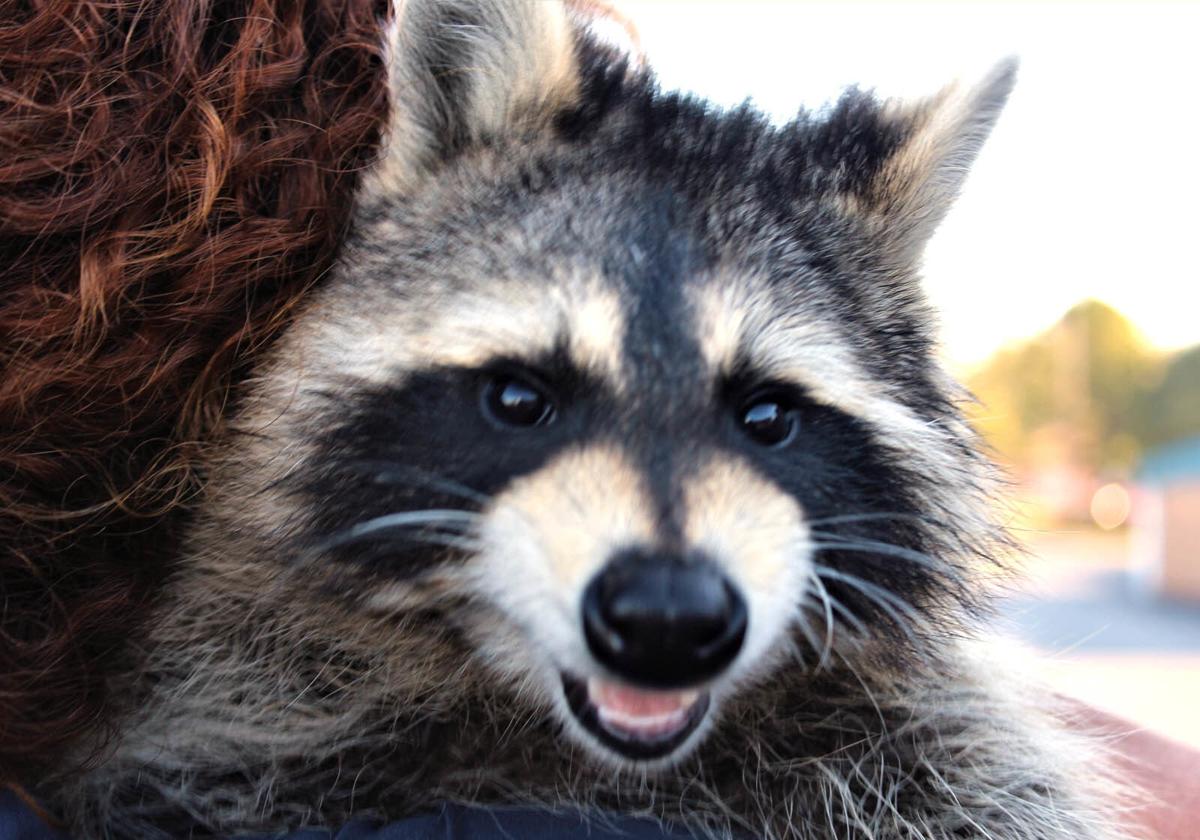 Boone the raccoon sits on the shoulder of Mary Key while at Central Hardin High School. 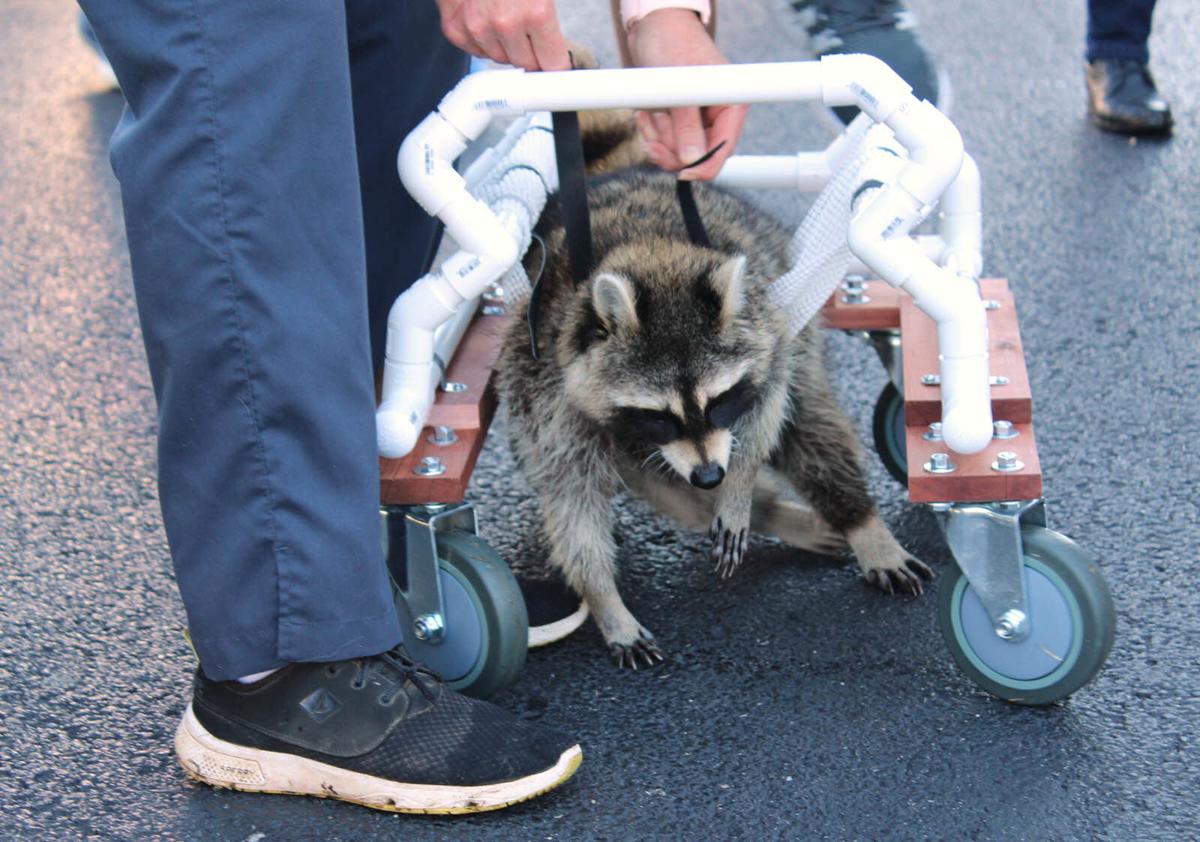 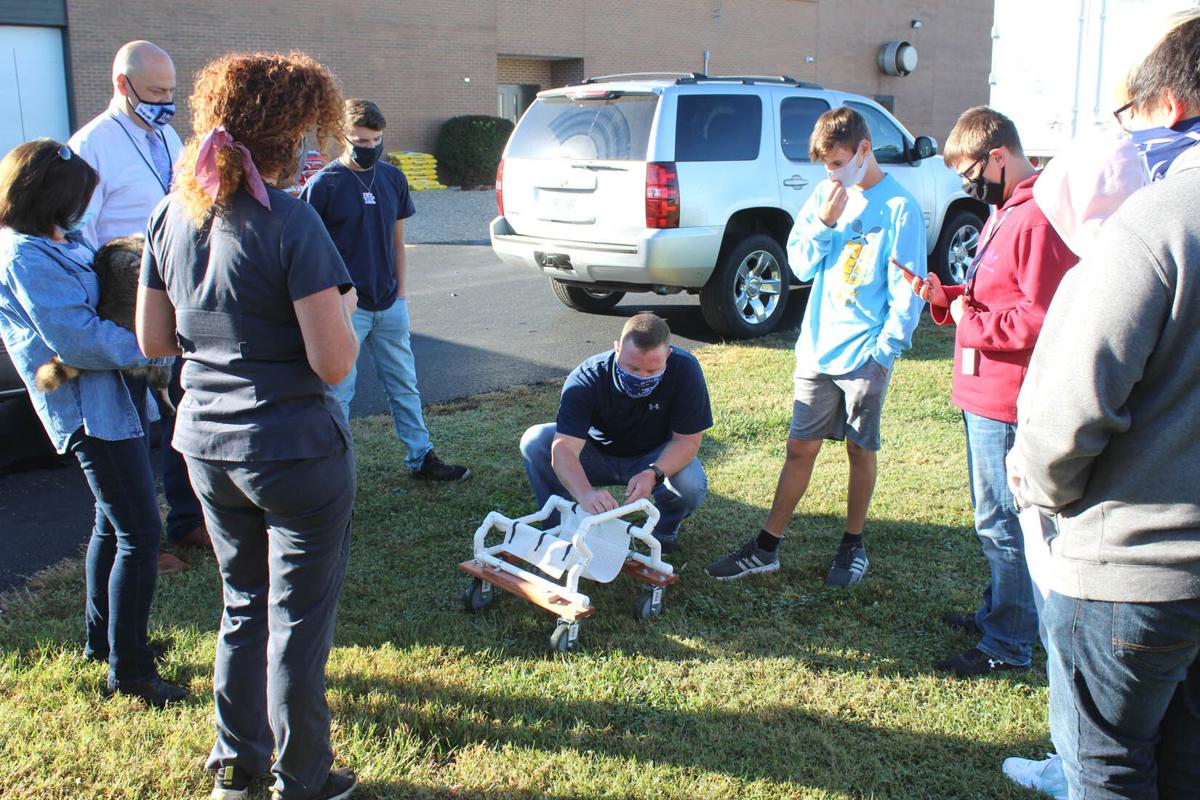 Students stand around teacher Russ Pike as they hypothesize about how to make a wheelchair prototype work better for Boone the raccoon.

Boone the raccoon sits on the shoulder of Mary Key while at Central Hardin High School.

Students stand around teacher Russ Pike as they hypothesize about how to make a wheelchair prototype work better for Boone the raccoon.

A local raccoon is getting much needed assistance from an engineering class at Central Hardin High School.

Boone is a 5-month old, male raccoon who recently was brought to Nolin River Wildlife sanctuary in Glendale from Louisville.

When Boone was brought in, he was a newborn with his eyes closed, she said. They didn’t know anything was wrong with him until he became old enough to walk.

“He was later diagnosed with Cerebellar Hypoplasia,” Key said. “This is caused by a probable viral infection when the mom was pregnant (toxoplasmosis) and she pushed him out of the nest, most likely, when she detected a disability.”

“He has an intentional tremor and can’t coordinate movements which affect all areas,” she said. “His cognitive status is not affected and he is not in pain.”

Through this, Boone also has become TikTok famous on the Nolin River Wildlife account. One video has more than one million views.

“We hope his popularity will reach a large audience and change their negative perceptions of raccoons and all wildlife,” Key said.

To aid in his recovery and mobility, Key tried buying a wheel chair on the internet, but it didn’t work for Boone.

“When I realized he would need a wheelchair for his specific needs and my lack of skill and money to get one for him, I asked principal Tim Isaacs at Central Hardin High School if any of the students would be interested in designing a wheelchair for him and so Mr. Isaacs asked the engineering students with Mr. Russ Pike,” she said.

That’s when a group of sophomore engineering students took on the case.

“I thought it was a fun project for engineering,” student Aiden Neagle said.

While doing the project, Neagle said it helped him learn the trial-and-error process of engineering.

Pike said they were approached to do the project about a month ago and have worked on prototype designs.

Tuesday morning, Boone visited the classroom for a test run on their second prototype. During the process, students watched how the raccoon was able to move in the device and how it fit the animal in order to evaluate what improvements need to be made to their design.

The materials used in the prototype aren’t the same ones that will be used in the final design, but are used to help them figure out what they need to do to make an apparatus to make life easier for the raccoon.

“We’re trying to help Boone here with a wheelchair,” Pike said. “In the project lead the way courses we really talk about the design process and one of our big points is taking something from an idea into an actual working model.”

Pike has enjoyed seeing the students apply what they’ve learned in class.

By building on what they’ve learned in books, he said they can get a grasp on the process because while creating the wheelchair they can see the end product and see that they are helping Boone out.

Pike said the students are very excited and send him many messages with ideas to make their designs better.

They each sketched out an idea and worked on it as a team. Through the process, they use problem solving and communication skills to identify problems and solutions, he said.

“It’s neat to see Boone actually use it and it somewhat working,” Pike said of the prototype trial Tuesday. “I’ve been really impressed with the students and excited to see them involved and excited with this project.”

Hanging out with a raccoon is an added bonus, he said.

“The students were super responsive and came up with so many wonderful ideas on our first visit,” Key said. “I can’t wait to see all that they come up with.”

At the second fitting on Tuesday, she was impressed that even though that model wasn’t perfect yet, it already allowed Boone more movement on his own.

“I hope he will be able to move around the yard and house with some direction and speed,” she said. “He isn’t lacking in strength as much as sequencing the motor movements.”

Her end goal is to see Boone with the ability to play with the dogs and other raccoons at the sanctuary.