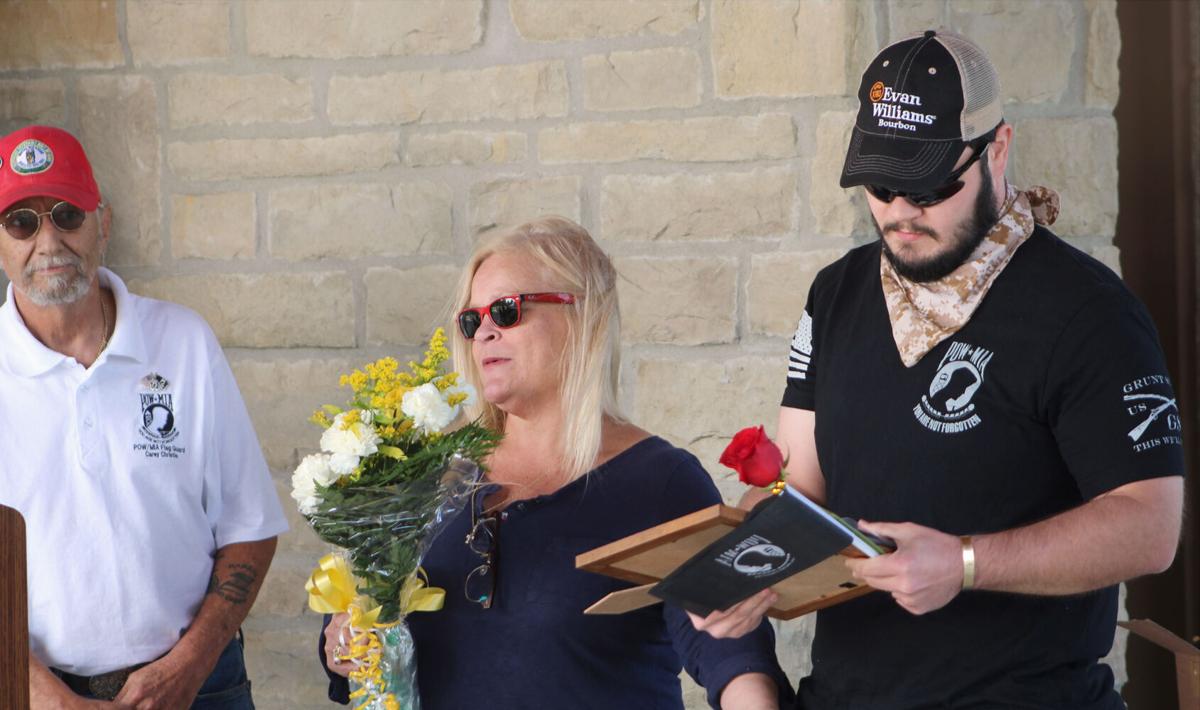 Standing with her son Harrison, Joan Shelton of Louisville receives a plaque and certificate from C.T. Christie during a POW/MIA remembrance ceremony at the Elizabethtown Nature Park Friday morning. Shelton’s father, Col. Charles Shelton, was a prisoner of war during the Vietnam War. 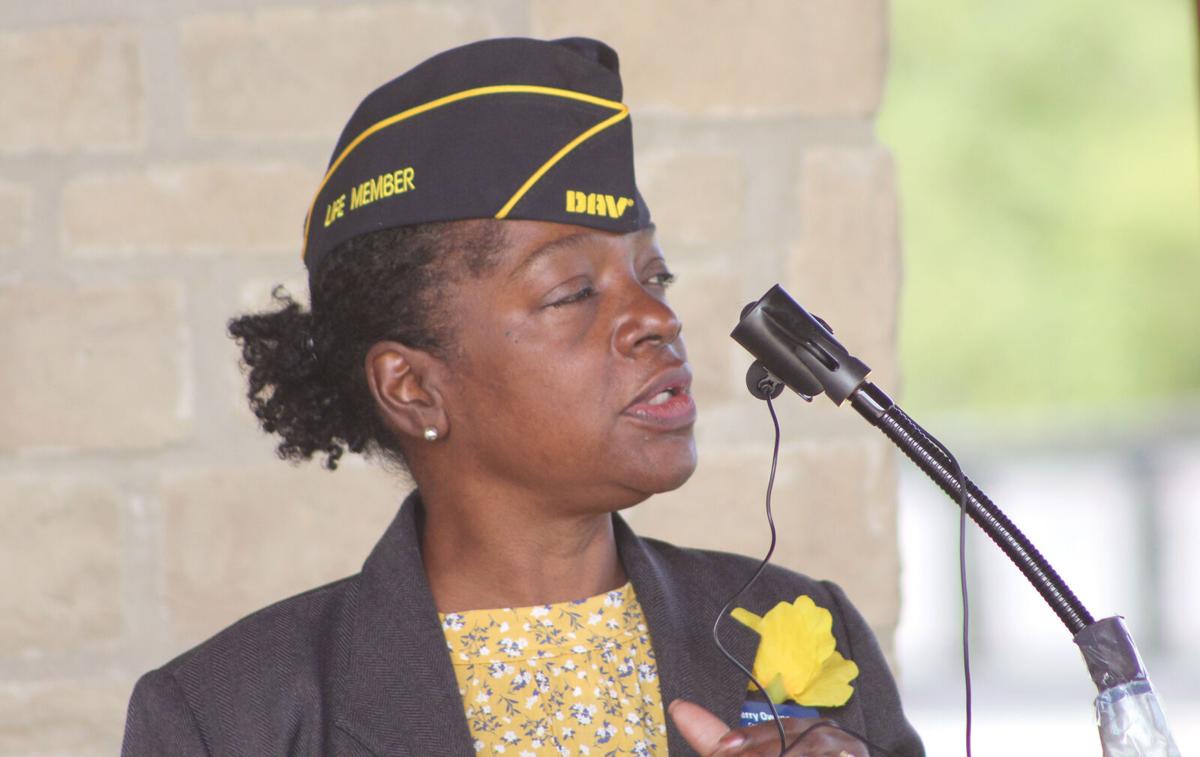 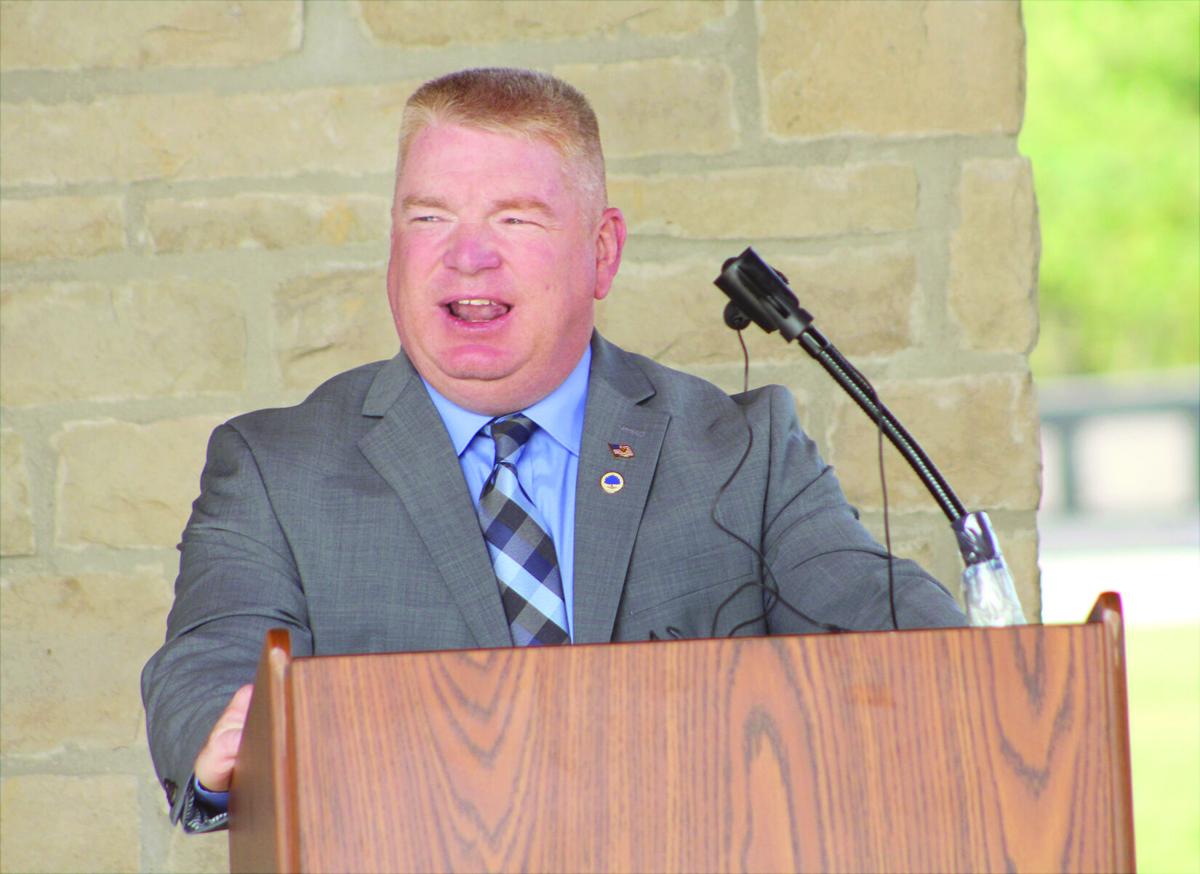 Standing with her son Harrison, Joan Shelton of Louisville receives a plaque and certificate from C.T. Christie during a POW/MIA remembrance ceremony at the Elizabethtown Nature Park Friday morning. Shelton’s father, Col. Charles Shelton, was a prisoner of war during the Vietnam War.

As a wind gust flowed through the Elizabethtown Nature Park, small POW/MIA flags flew in the hands of attendees of a remembrance ceremony in the park’s pavilion.

The ceremony Friday morning was held in observance of National POW/MIA Recognition Day, an observance honoring those who were prisoners of war and those who are still missing in action.

In attendance at the ceremony was Joan Shelton of Louisville and her son Harrison. Joan’s father, Air Force pilot Col. Charles Shelton of Owensboro, was shot down in Laos in 1965 during the Vietnam War.

After 148 missions and more than 300 hours dedicated to finding Shelton, he was declared MIA. Shelton was reported to have been extremely uncooperative with his captors, making several escape attempts and reportedly killing three of his interrogators.

Shelton reportedly was kept in a shallow pit covered by bars. After many failed attempts to rescue Shelton, he was officially declared dead until nearly three decades after his capture.

During Friday’s ceremony, Joan was honored with a plaque and certificate from local Vietnam veteran C.T. Christie.

“Thank you all for being here and remembering these heroes,” she told attendees Friday.

Owens said there have been a total of 1,586 POWs in Ken­tucky, 14 of whom still are unaccounted for.

“We reflect on their memory and we recommend ourselves to remember what they’ve done for us,” he said.

Gregory said because of the strong veteran population and support for veterans in the community, POWs and MIAs never will be forgotten in Hardin County.

“I can honestly say I don’t think that in Elizabethtown or Hardin County, that our POWs, MIAs or veterans will ever be under-appreciated of forgotten,” he said.