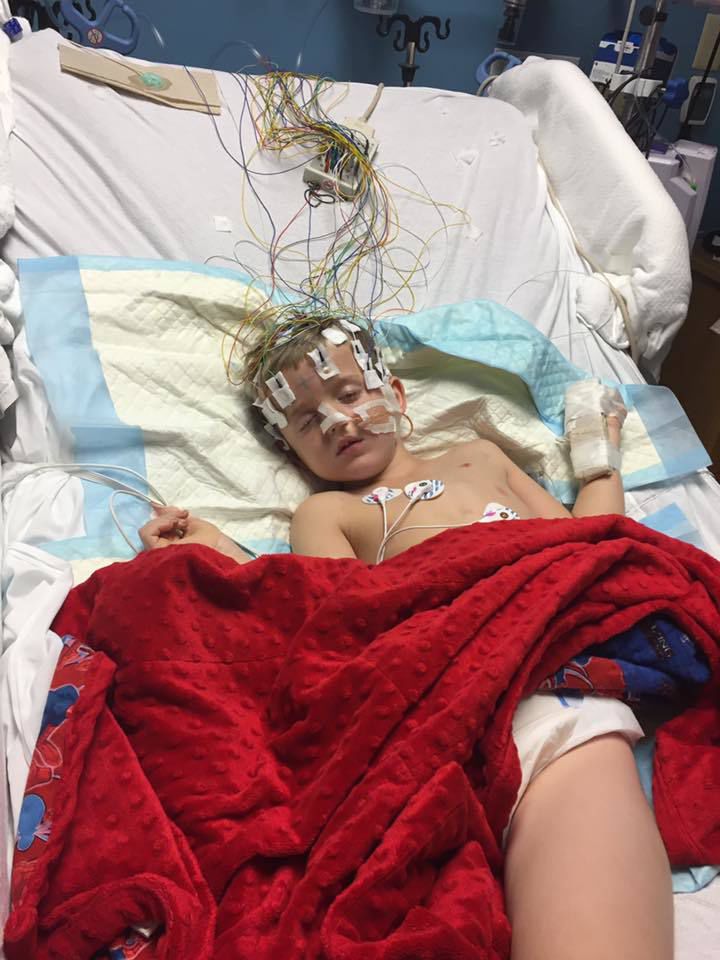 Wyatt Shaw mysteriously slept for 11 days and doctors at Norton Children's Hospital used electrodes to monitor his brain and bodily functions without determining any cause. Submitted photo 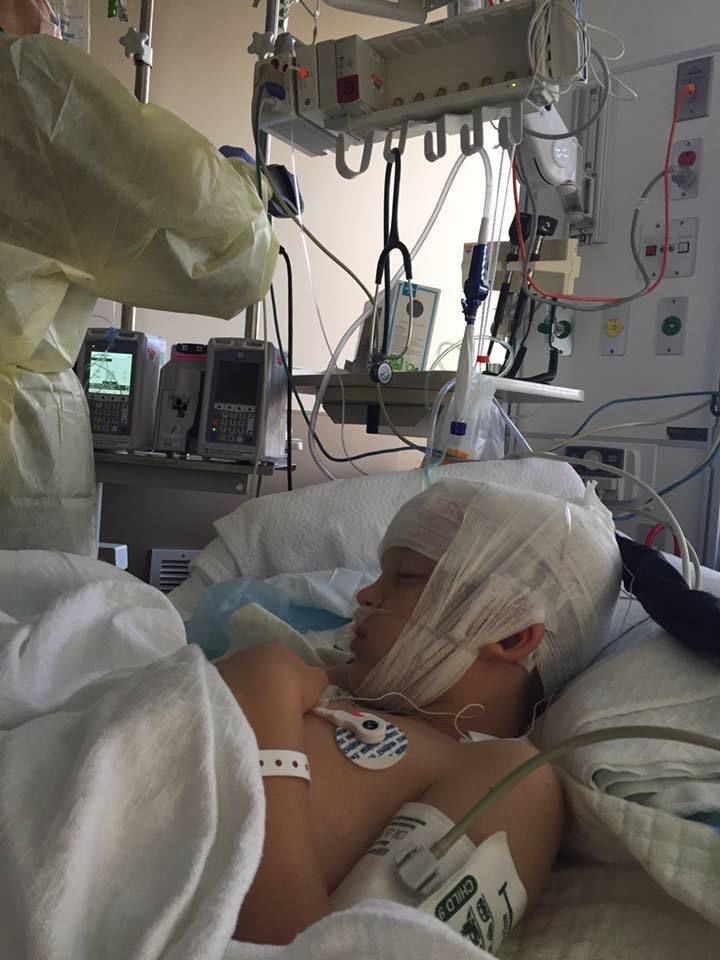 Physicians at Norton Children's Hospital monitor the progress of Wyatt Shaw, who slept 11 days. Tests have been inconclusive, according to his family. Submitted photo 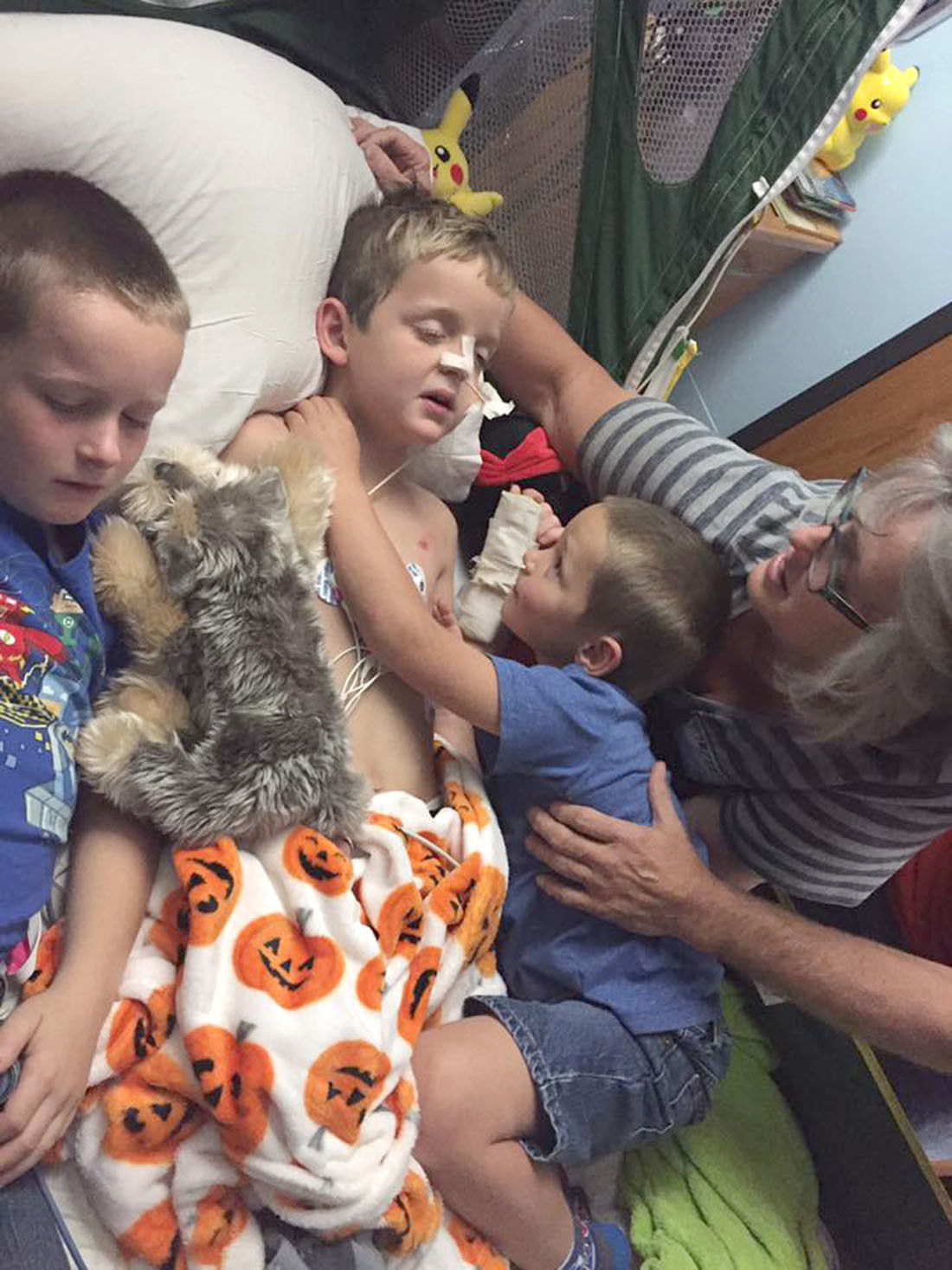 Since awakening from his 11-day sleep, Wyatt Shaw has been able to visit with his siblings, which family members say seems to have been a major encouragement for him. Submitted photo

Wyatt Shaw mysteriously slept for 11 days and doctors at Norton Children's Hospital used electrodes to monitor his brain and bodily functions without determining any cause. Submitted photo

Physicians at Norton Children's Hospital monitor the progress of Wyatt Shaw, who slept 11 days. Tests have been inconclusive, according to his family. Submitted photo

Since awakening from his 11-day sleep, Wyatt Shaw has been able to visit with his siblings, which family members say seems to have been a major encouragement for him. Submitted photo

After 11 days sleeping, Wyatt Shaw, to the relief of family members, finally woke up.

The cause for the abundance of time spent unconscious is a mystery, his grandmother Rhonda Thompson said.

The 7-year-old recently served as ring bearer at his uncle’s wedding ceremony. Thompson said he was the John Travolta of the wedding.

“He was perfectly fine. He danced all night. He was so outgoing,” she said. “He has just got the sweetest nature.”

The next morning, the family says Wyatt woke up with a stomach ache and complained his head hurt.

“You could tell he didn’t feel good ... but we thought he had just had too much cake from the wedding,” his grandmother said.

He was dozing in and out of consciousness, drinking water and watching cartoons. Generally, everything seemed normal.

Then, he went to bed and his mom, Amy Shaw, struggled to wake him. When he did wake, he was very lethargic and could not stand on his own.

After visiting a doctor in Elizabethtown, Wyatt was immediately sent to Norton Children’s Hospital in Louisville. Doug Thompson, Wyatt’s grandfather, said Wyatt was alert until that night, joking around with him.

“Then, after that, he went into that deep sleep,” Doug said.

The second-grader slept for 11 days.

All the tests came back negative.

Rhonda Thompson said doctors suspected Cephlitus, which is an infection of the brain. They tested for it but those results also came back negative.

She said the children hospital’s doctors have been working with the Mayo Clinic in Minnesota and a doctor in London.

“The doctor in London said he has seen a child sleep for as long as 10 days without waking up and Wyatt slept for 11. I said he was such a competitor that he wanted to break that 10-day record so he did,” Rhonda said, laughing. “This doctor said, chances are, Wyatt would wake up and nothing would ever be found.”

Wyatt woke up Thursday. He is able to swallow liquid and has limited movement and speech. He was able to see his twin and younger brother, which his grandparents said was very beneficial to recovery. Wyatt is one of five children and is a student at Heartland Elementary School.

Although he woke up, Doug Thompson said the doctor did say it would be a “roller coaster” of events going forward.

Rhonda said the ordeal has been “heart wrenching.”

“The world stops when your grandbabies are sick,” she said. “Every result kept coming back within a normal range. They couldn’t find anything and they couldn’t treat him until they found something. He was on no medicines. He just woke up.”

Rhonda said community support during the stressful time has been phenomenal.

A GoFundMe page has been established for the Elizabethtown family and other fundraising support has popped up since the community learned of the sleeping boy’s situation.

Jade Flynn, a friend of Wyatt’s mother since first grade, is conducting an online fundraiser to help the family. She said she wants to send a little bit of encouragement their way.

“Wyatt is just a spunky kid, full of life and full of laughter,” she said. “It’s heartbreaking to see them go through this.”

An Oct. 26 concert is being organized by J.J. Duvall, Radcliff’s economic development, planning and building director and father of three, who said he believes most people understand the family’s distress.

“It just tugs at your heart strings,” Duvall said. “It could be anybody’s child.”

In addition to a gofundme page dedicated to raising money for the family of Wyatt Shaw, three fundraising events are underway.

• Wilson & Muir Bank is selling T-shirts to raise money to go toward Wyatt’s recovery. Alex Childress, a bank employee, said the shirts sell for $20 each. The shirts are blue, Wyatt’s favorite color, and have “Wyatt’s Warriors” written on them and “Rise and Shine,” which his mother likes to sing to Wyatt. Prepayment is required to purchase a shirt. They can go to Wilson & Muir branch in Elizabethtown and ask for Childress. Orders must be in by the end of business on Wednesday.

• Local entertainers are volunteering to perform at a benefit event is set from 6 to 10 p.m. Oct. 26 at Northside Hall, 1165 N. Wilson Road, Radcliff. Organized by J.J. Duvall, he said the $20 admission fee will be donated directly to the family. Items also are being sought for a benefit auction during the event. To donate, call Kim Nelson at 270-734-0210.

when I was a child, I had slept 20 days without waking up...