Cattle graze on the hillside Monday afternoon at Thomas Farm in Elizabethtown. 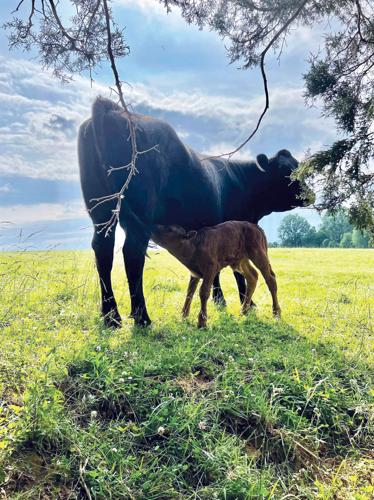 A calf born Sunday with its mom at Lucas Farms in Rineyville.

Cattle graze on the hillside Monday afternoon at Thomas Farm in Elizabethtown.

A calf born Sunday with its mom at Lucas Farms in Rineyville.

While consumers are seeing higher beef prices on the grocery shelves, local farmers aren’t seeing those profits because of inflated production costs.

“The best way to sum it up would be to take the year’s cost that we had in 2021 versus what we have today,” said Chuck Crutcher, local farmer and Hardin County Cattlemen’s Association board member.

What’s impacted the cattle industry is there’s only been a small increase in revenue versus a large increase in production costs, he said.

The cost the packers are getting from grocery store markups is not getting passed down the line to the farmers, he said.

Many farmers he’s spoken to that work with cattle say there’s such a small margin of profit in the cattle industry that they aren’t using the required fertilizer this year to offset some of the cost and are running less cows and calves per acre.

“We’re taking a risk and the return is not coming back,” he said.

Hardin County Extension Agent for Agriculture and Natural Resources Matt Adams said input costs have more than doubled for cattle producers while the price for live cattle has increased only slightly.

“Growers of commodities like corn and soybeans have seen the same increases but, in most cases, prices for those commodities have risen at the same or greater rate.”

The rise in the price of feed grains also contributed to the increase in feed for cattle producers, he said.

The cost that’s being passed on to consumers in the meat case at grocery stores is related to fuel and labor costs, Adams said.

“High fuel prices have caused trucking costs to skyrocket and the labor situation coming out of COVID has forced meat processors to greatly increase wages in order to hire and retain employees,” he said.

Fuel prices, Adams said, have had an impact on everything for consumers and if consumers can locally source meat or other products without transport, it should be cheaper.

Jason Buckles has a small hay, grain and cattle farm in Glendale that was started by his father around 1965.

He spent Thursday morning trying to shave some expenses on his farm by getting free Louisville green soil amendment applied to his ground. But that’s not entirely free, he said.

Buckles still has to pay trucking and application fees. Nutrients applied to the farm by weight are cheaper than buying fertilizer, but it is more labor intensive, he said.

“I have applied some normal fertilizer although at a greatly reduced rate, simply because of the expense and I’m not alone in that boat either,” he said. “Most people I’ve talked to about agricultural don’t realize that whatever leaves the ground has to be replaced through fertilize or the nutrients will be depleted.”

Buckles said cattle farmers are getting hit from both sides with higher fertilizer and feed prices.

“The local markets haven’t really risen to a profitable level in at least a year now,” he said. “The price income has increased slightly, but the expenses are washing out any gains.”

Buckles said the benefits of buying beef from local farmers are numerous. It can take several of the steps that cause expensive markups in the grocery out of the equation, he said.

A negative is the cost of feed can be a little more expensive than it is in the upper Midwest. As a result, many local producers are using distillery byproduct which can be a plus, Buckles said.

“It’s great for growing cattle as an energy supplement,” he said. “But when it comes to finishing an animal, corn is critically important.”

To find local producers selling beef, Buckles said social media has made a great impact. Before, it was mostly word of mouth or stopping by a farm to ask. He said that slaughter capacity also is a large expense.

“I’m just a small operation and it would be real hard for me to locate a butcher shop and get an appointment for one beef anytime in the near future,” he said. “A lot of the locally grown beef growers are making 20 to 40 appointments at a time with the few butcher shops we have.”

That’s not something Buckles said can compete with so his often go to sale. He said that’s nothing against other growers, it’s just the way he operates.

Buying freezer beef is an enormous expense up front and some families can’t afford the expense or be able to store it. Buckles has seen a lot of quarter or half beef advertisements on social media to share the cost.

Crutcher said selling it from the farm helps to provide a better return for the farmer and it’s better for the consumer who wants to know where their product is coming from.

Many producers have a stable customer base and Crutcher said he also sees them spreading the word on social media.

There’s also a database for producers so consumers can find where to purchase beef from a farm. It’s found at bit.ly/3QjnQVH. But, Crutcher said, there are no Hardin County farmers listed on that database. He encourages producers to reach out to be listed.