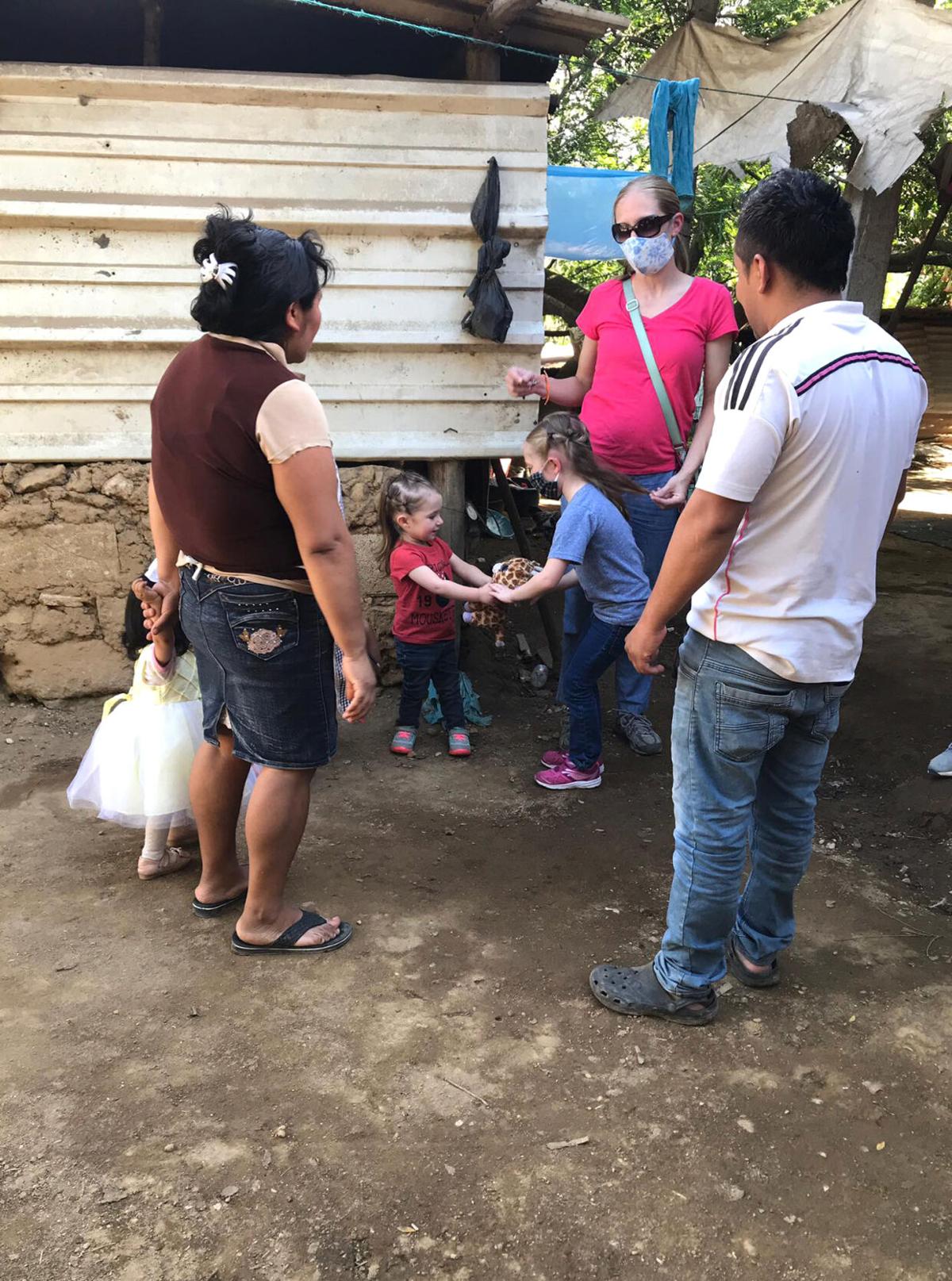 Kelly Hart visiting with, Betsy, a child involved in their ministry. The Harts’ children Mia and Josie enjoy visiting this family. 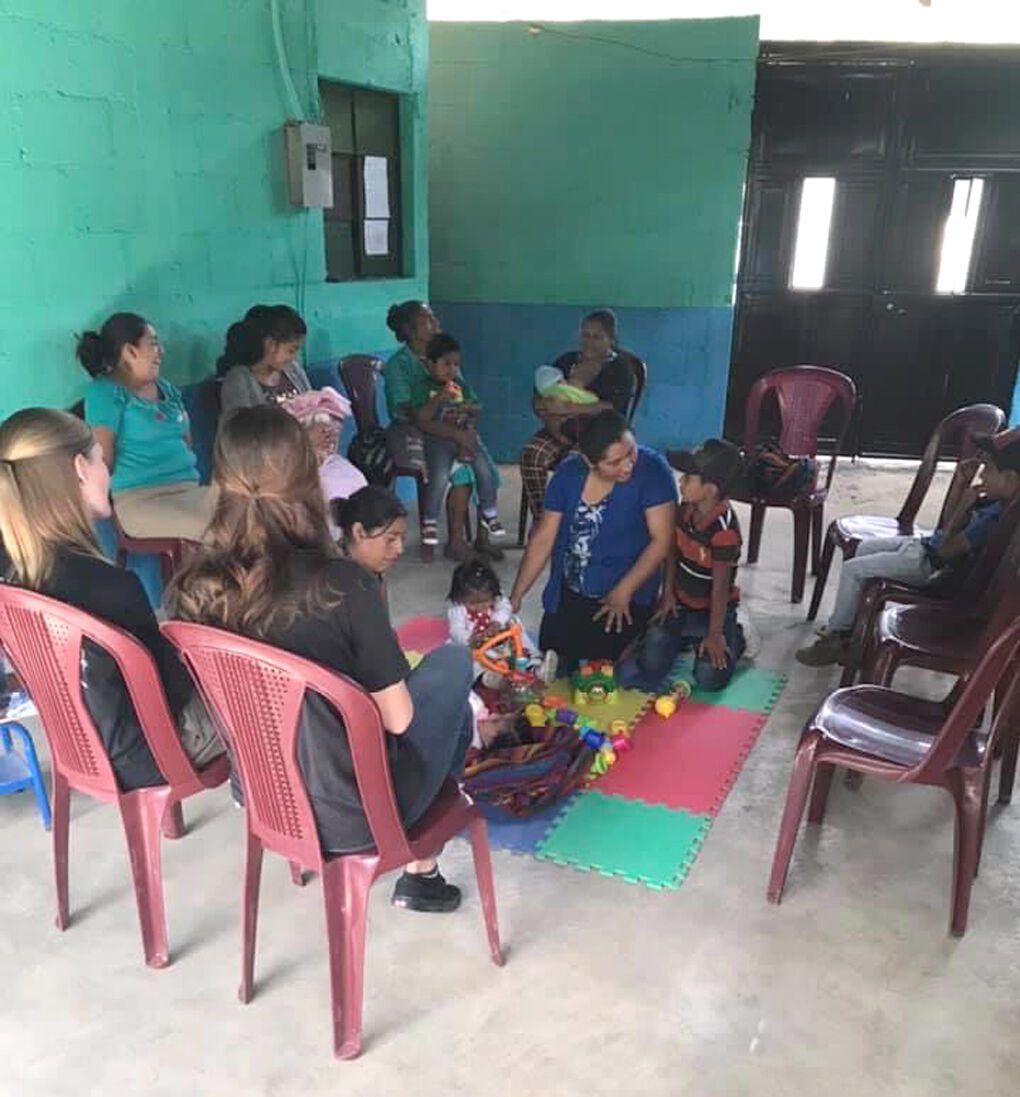 Women in San Lorenzo, Guatemala, meet for a baby class with Jason and Kelly Hart before the COVID-19 pandemic limited in-person meetings. The Harts, from Elizabehtown, are missionaries serving women with children in the community. 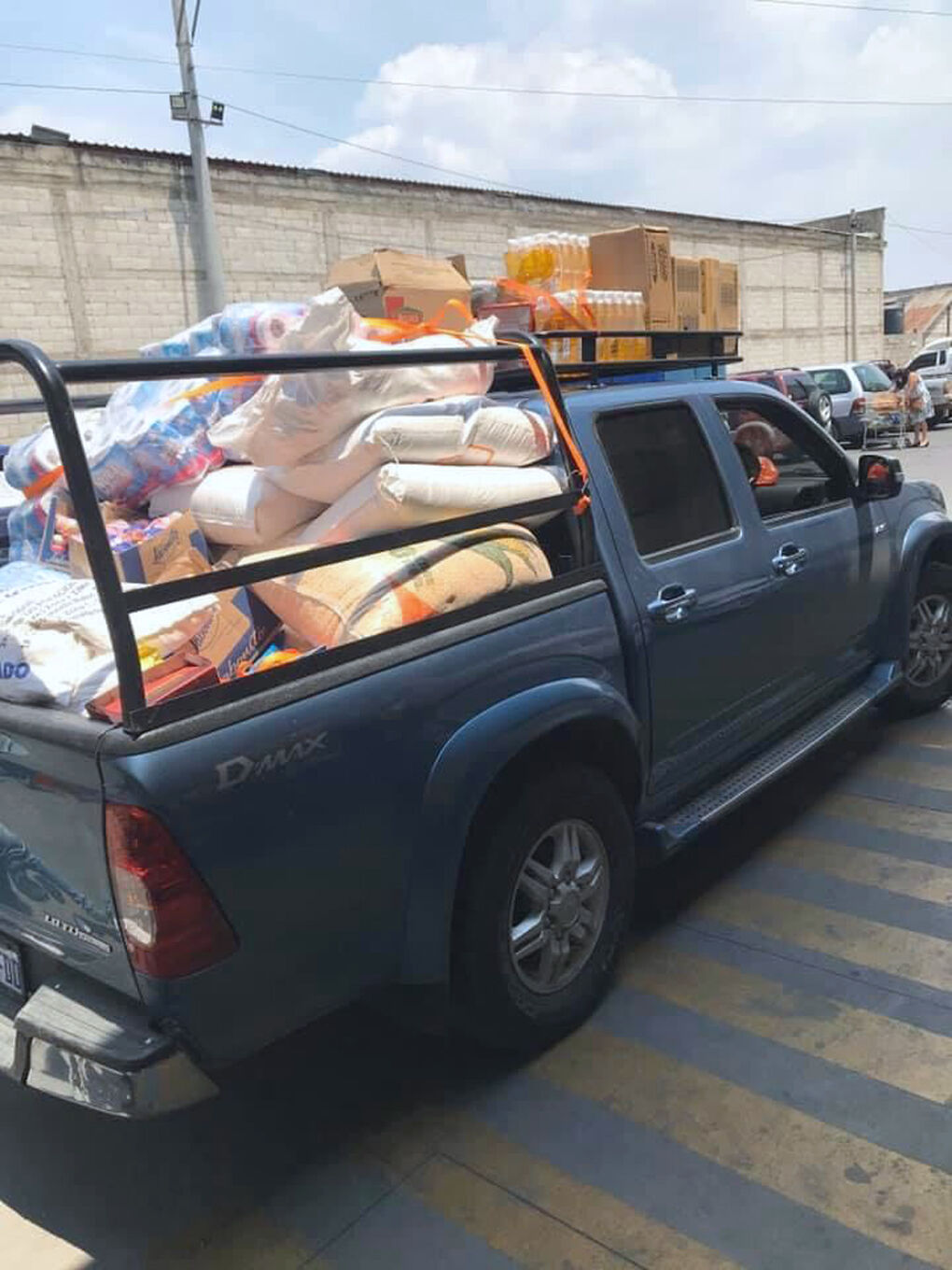 A truck filled with food to bag up to give to families during the COVID-19 crisis. 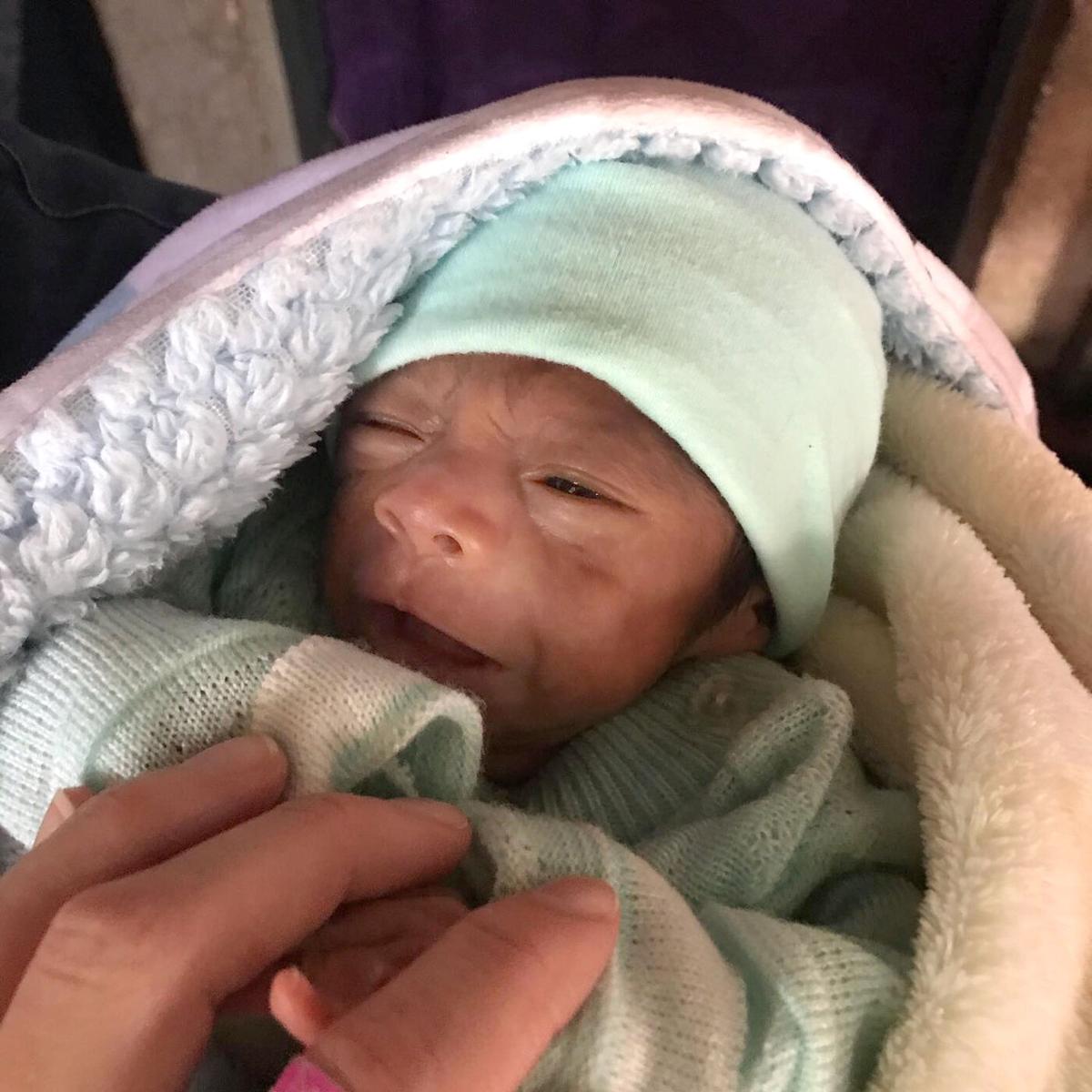 Baby Joel, a child in the Servant Hart ministry, was born at 32 weeks and weighed less than four pounds. The Harts found him about a month ago and he already is seven pounds. 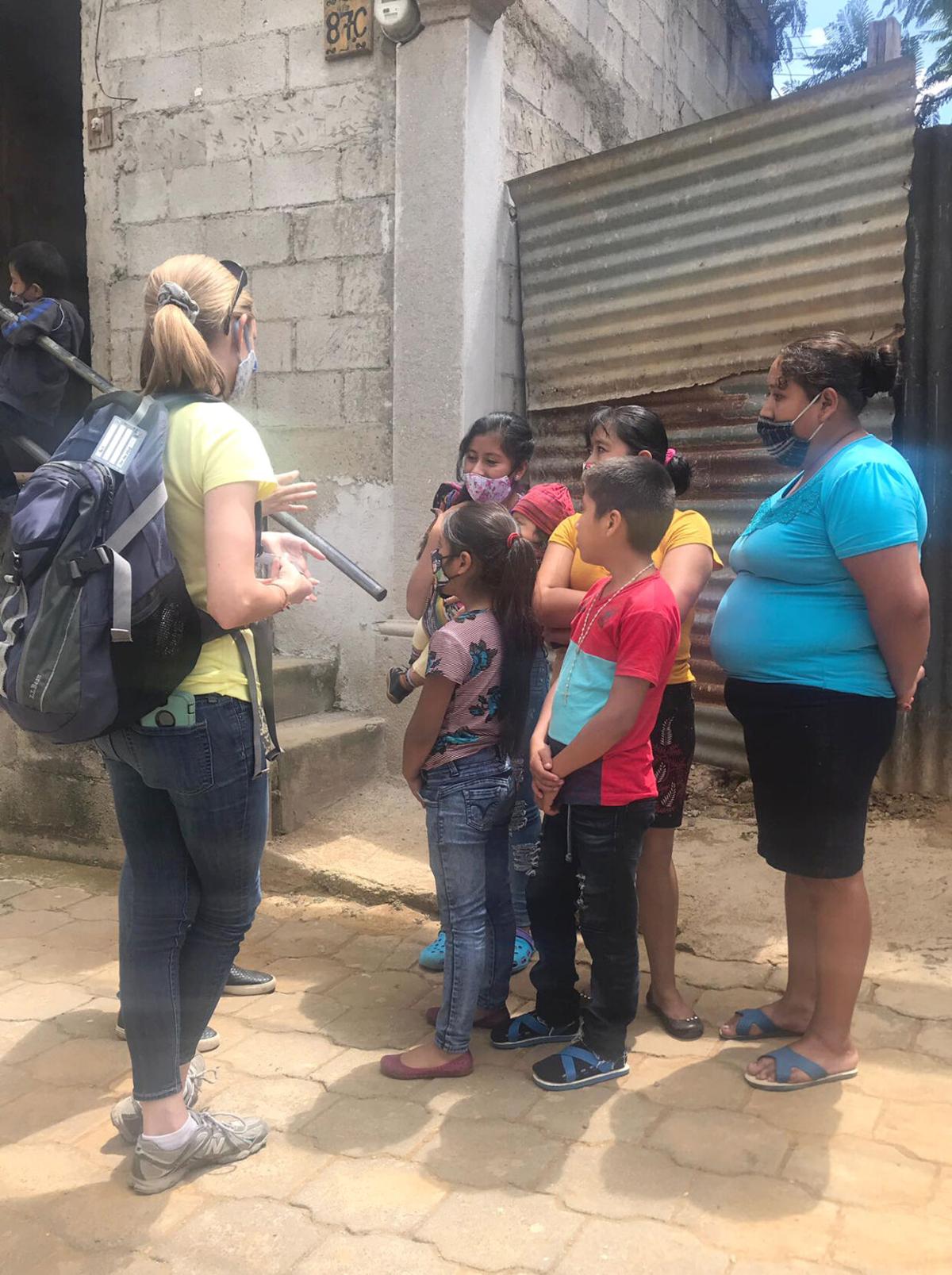 Kelly Hart talks to a family who is asking for the Harts to build a kitchen for them.

Kelly Hart visiting with, Betsy, a child involved in their ministry. The Harts’ children Mia and Josie enjoy visiting this family.

Women in San Lorenzo, Guatemala, meet for a baby class with Jason and Kelly Hart before the COVID-19 pandemic limited in-person meetings. The Harts, from Elizabehtown, are missionaries serving women with children in the community.

A truck filled with food to bag up to give to families during the COVID-19 crisis.

Baby Joel, a child in the Servant Hart ministry, was born at 32 weeks and weighed less than four pounds. The Harts found him about a month ago and he already is seven pounds.

Kelly Hart talks to a family who is asking for the Harts to build a kitchen for them.

Jason and Kelly Hart left Elizabethtown for a ministry in Guatemala, serving in the small town of San Lorenzo, El Tejar since November.

The couple helps mothers by providing edu­cation and resources to help babies thrive. They also conduct Bible studies for women to learn about God’s love and establish community among the mothers. Home visits to make sure the house is safe and clean for the family are another aspect of the ministry.

The couple said they hope to use their ministry and programs to get children out of chronic malnutrition and change their families for generations.

“Our first six months were spent in Spanish school while we were looking for the village God called us to serve,” Jason said.

In November, they found their first two children to help before coming back to Kentucky for a visit during the holidays.

The Harts also provide water filters for clean water access in homes and a clean air stove so smoke can be piped out of the kitchen.

“To date, we have been able to give out ten water filters and provide eight clean air stoves,” he said.

In June, the next phase began to ensure safe homes for these families. The Harts began construction of one-bedroom houses and kitchens for families by teaming up with local construction workers.

“They have built two homes and two kitchens in two months with plans for another home coming soon,” Jason said.

The next step in their ministry is to build a clinic and ministry center.

“The clinic will be a place of hope and healing for San Lorenzo and surrounding communities,” Jason said. “It will allow us also to host medical mission teams to host short-term clinics for San Lorenzo.”

A family in the ministry is allowing them to build the center on their land. Jason said they prayed about this project since the first day of their ministry.

“It is nothing short of a miracle,” he said. “The timing is not something we expected when we planned a fundraiser for this fall.”

Guatemala declared a state of calamity, similar to a state of emergency in the United States on March 6.

When that happened, the country closed all their borders and shut down public transportation, business, shopping centers, churches and schools, Jason said.

“Masks became mandatory by mid-April or we could be fined up to $20,000 or put in jail,” he said. “Curfews were set at 4 p.m. every day and weekends were completely shut down.”

Jason said he can’t even put into words what COVID-19 has done to the country. Residents started standing on the side of the road holding white flags to let others know they needed food.

Guatemala has one of the highest poverty levels in the world, but the COVID shutdown has made it worse, Jason said.

“There have been stimulus packages but they are not reaching the ones who need it the most,” he said.

Ministries in the country shifted their focus to provide food to those without.

“Personally, we have given out over $10,000 worth of food thanks to donations from friends, family and strangers all over the United States,” Jason said.

Things are starting to slowly reopen. Curfews are over and the weekends are no longer shut down. The airport also is supposed to open soon. The family hopes that means that will allow them to come back to Kentucky in November for a visit.

All this has caused changes to the way the Harts conduct their ministry.

“Previously we were having a class every Friday with all the moms where we would weigh the babies and Kelly would have a class concerning development and education, along with a Bible study,” he said. “This was an amazing time for the moms to come together and form much needed community with each other.”

In the wake of COV­ID, they now weigh each baby in their homes, which also allows the Harts to visit with families and form relationships with them, he said.

“While COVID has changed everything, we are grateful for individual time with each family to get to know them better and grow these foundational relationships,” Jason said.

The Harts made the decision to stay in Guatemala at the beginning of COV­ID-19 instead of coming back to the United States on a repatriation flight.

“Guatemala is our home now as we sold everything in the U.S. and we have more responsibilities than ourselves as we are making sure our nine babies are continuing to thrive,” Jason said.

Because of CO­VID, the family cannot come back to the United States for fundraising. They had planned to host a fundraiser this month but had to cancel that effort and move fundraising online.

This fundraiser will take the form of an online auction. They currently are looking for items to be donated for the auction.

“We have had to rely on friends and family to send letters and make the asks in our place,” Jason said. “Likewise, we are looking for financial gifts as well.”

The ministry, called Servant Harts, now is a registered nonprofit in the United States, which allows any financial gifts to be tax deductible, he said.

The auction is Oct. 16-17 through a secondary auction website and information about the upcoming auction can be found on the Servant Harts Facebook page.

Money raised will go toward the yearly budget and to build the clinic. The yearly budget needs includes home construction, providing clean air cooking stoves and water filters, general construction costs such as roof repairs, school scholarships, pediatrician and obstetrician visits including labs and imaging studies, medicines and other general ministry needs for the clinic, he said.

The $15,000 estimate for the clinic allows them to build a security wall around the property and construct the clinic, which will have one large room for classes, an exam room, storage closet and bathroom.

Donations can be made at servantharts.com or mailed to 273 Riley Way, Elizabethtown, KY 42701.