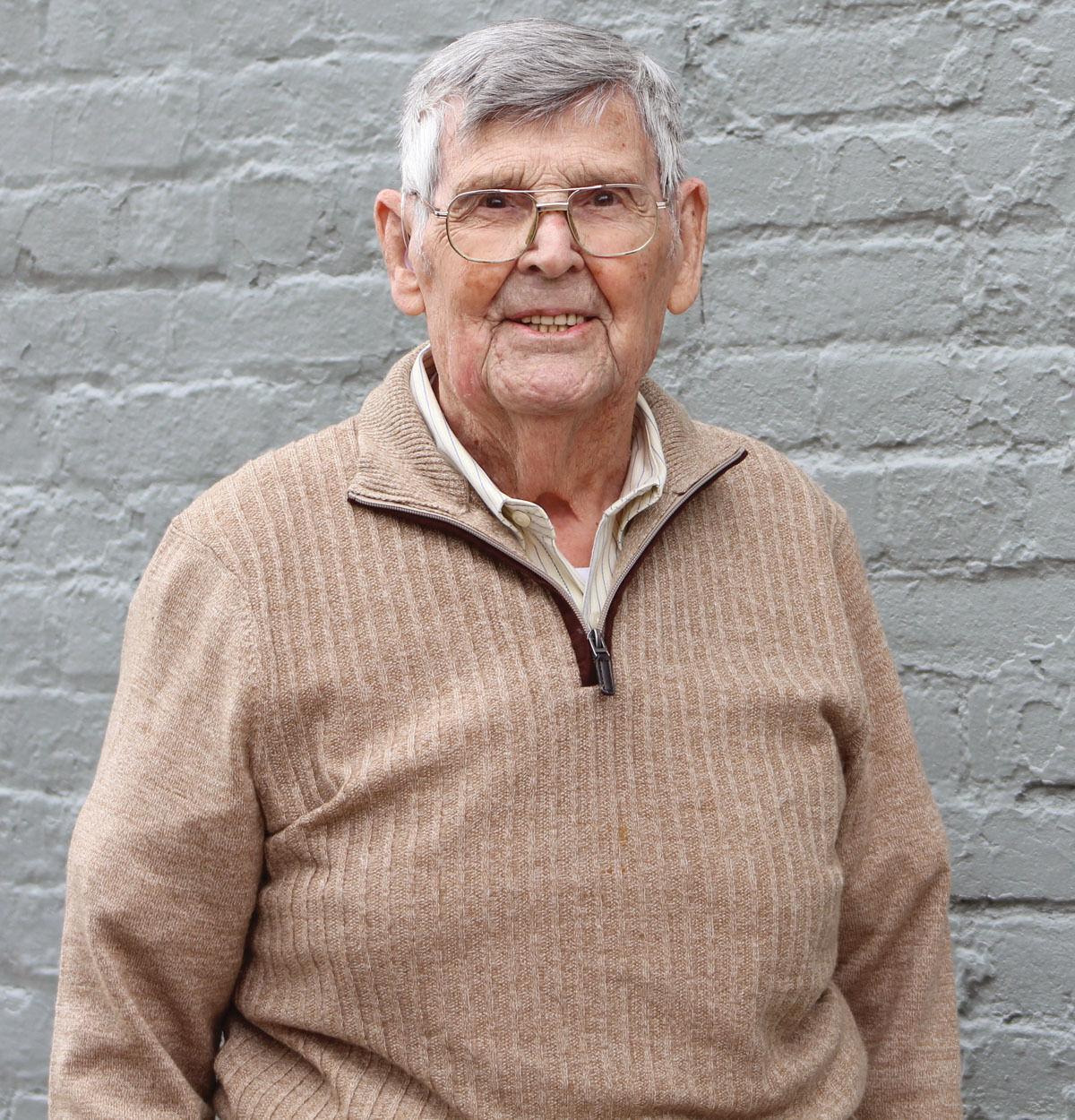 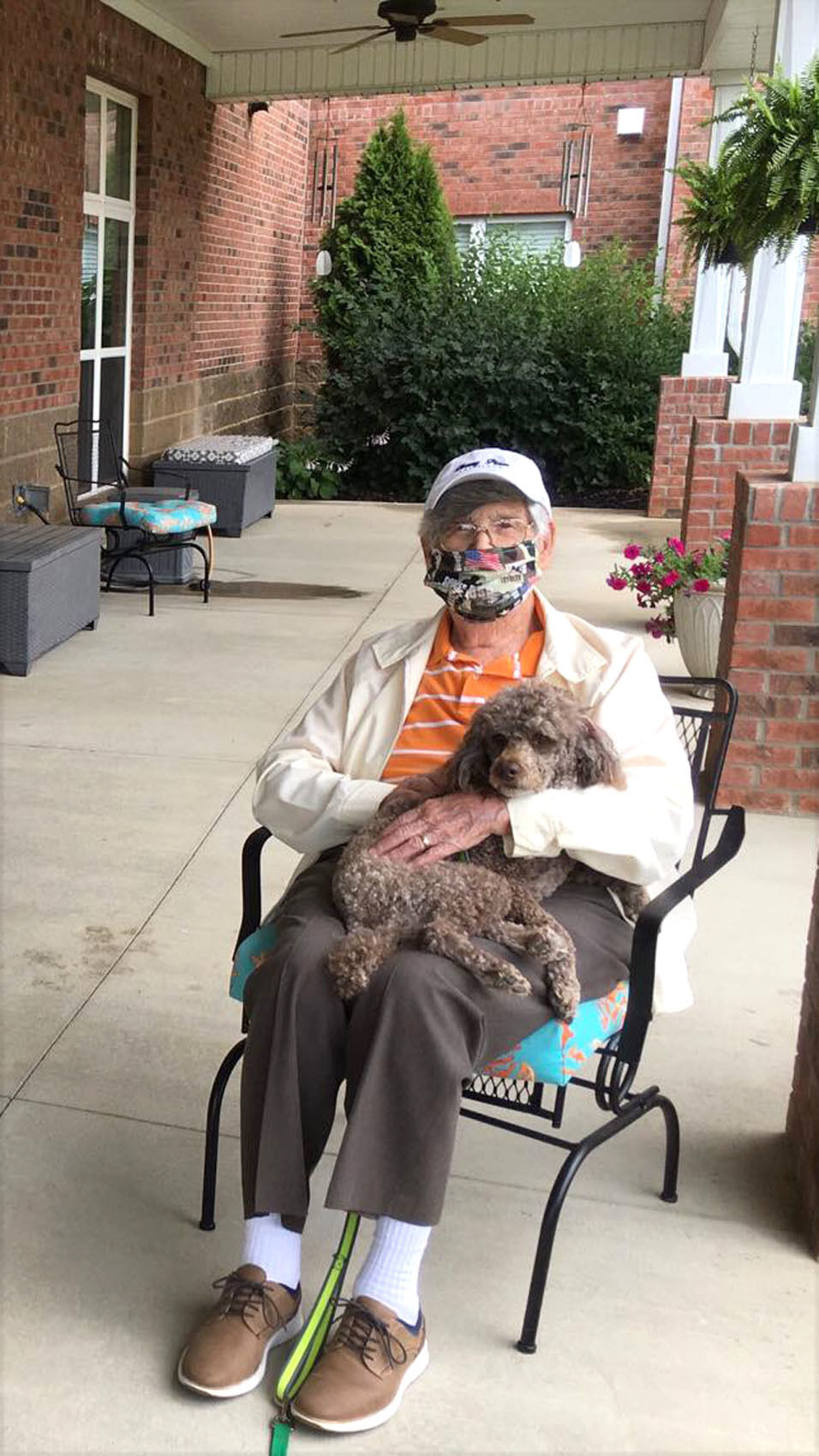 Hayes sits outside of RobinBrooke Senior Living with Molly, a dog owned by his stepdaughter Elizabeth Lancaster.

Hayes sits outside of RobinBrooke Senior Living with Molly, a dog owned by his stepdaughter Elizabeth Lancaster.

Wayne Hayes remembers a time when he would drive past a sign on what now is North Mulberry Street in Elizabethtown that declared the city’s population to be 4,500.

With the population now estimated to be more than 30,000, a great deal of growth and change have occurred throughout Hayes’ life. Despite all the transformations that have happened around him, Hayes has maintained some key values, including a strong faith, a dedication to family and a devotion to service for his community and his country.

On April 13, Hayes will celebrate 100 years of life. Although simply being a centenarian is quite the achievement in itself, the way Hayes has filled those 100 years – from fighting in World War II to maintaining a local business for three decades to finding new love in his golden years – is much more remarkable.

Born just outside of Hodgenville on April 13, 1921, Hayes is a 1939 graduate of the former Glendale High School. Following graduation, he went on to study for two years at Bowling Green Business University, which eventually became what now is known as the Gordon Ford College of Business at Western Kentucky University. He then worked for two years at Vultee Aircraft in Nashville before joining the Army in 1943.

Hayes served for two years in the Pacific Theater with the U.S. Army Air Corps during WWII. Serving as a radar operator on a B-29 bomber crew, Hayes took part in 30 missions over Japan.

Hayes said he was a member of an 11-man crew, which he said consisted of the pilot, co-pilot, bombardier, radio operator, navigator, flight engineer and four total gunners.

“I was actually the assistant to the navigator who was primarily in charge,” he said. “If it was cloudy, it was my job to guide us to the target.”

Some of his missions included dropping off supplies to American prisoners of war and dropping leaflets informing the Japanese of upcoming bomb strikes.

“They were 13- or 14-hour missions and we would come back, fall in the bunk, get up two days later and do another one,” he said.

Hayes’ plane was shot during one encounter in the sky, which he said resulted in the loss of two engines and part of one of the aircraft’s wings. His crew was forced to land in Iwo Jima and one member of his crew was injured as a result of the strike, he said.

Hayes returned to the U.S. in 1945, a moment he said was one of the most memorable.

“When I got back to the United States and got off the plane, I bent over and kissed the ground,” he said.

After being discharg­ed from the Army that same year, Hayes settled down in Glendale, where he took on co-ownership of his father’s hardware store. He has stayed in Hardin County throughout his post-military life.

“I graduated from high school here, it’s my home and I knew everybody,” he said. “It was a place to come back to.”

Hayes has been involved with Lions Club activities for more than 75 years and has served as president for both the Glendale and Elizabethtown clubs. He also has served on the Heart of Kentucky Board of Realtors and has been a member of Severns Valley Baptist Church for nearly 60 years.

Hayes was married to his high school sweetheart, Polly, for more than 65 years until her death in 2007. But at age 88, Hayes got a second shot at love.

While attending a grief counseling group at church, Hayes met his second wife, Betty, who also was dealing with the recent death of her first spouse. Eventually, Hayes worked up the nerve to ask her on a date.

Hayes ended up marrying Betty in May 2009. As a married couple, Hayes said they enjoyed going on trips, eating at their favorite restaurants and spending plenty of quality time with family.

Hayes and his wife moved in 2019 to RobinBrooke Senior Living in Elizabethtown. He said as restrictions began to take hold at assisted living facilities amid COVID-19, the past year has been a challenge.

“It’s been awful hard on seniors,” he said. “Betty, bless her heart, she said, ‘I’m getting tired of looking at these four walls.’”

On March 11, Betty died peacefully at age 85. Though her passing was a tremendous loss for Hayes, he said he is thankful for what she brought to his life in those 12 years.

“She kept me going,” he said. “She waited on me, she loved me, she cared for me, she supported me in whatever I wanted to do.”

Approaching centenarian status, Hayes said he mostly credits his longevity to “the good Lord.” However, he said maintaining a healthy lifestyle certainly helped. He said he quit using tobacco products in the 1980s because of a mishap involving a pair of knit pants he owned at the time.

“I put my pipe in my pocket and burned a hole in them,” he said.

“My family has given me so much love, I just can’t hardly tell you,” he said.

Hayes will be a guest of honor during an Elizabethtown Lions Club meeting Tuesday, set for 6:30 p.m. at the Central Kentucky Community Foundation’s Home of Philanthropy, 200 Jim Owen Drive in Elizabethtown.