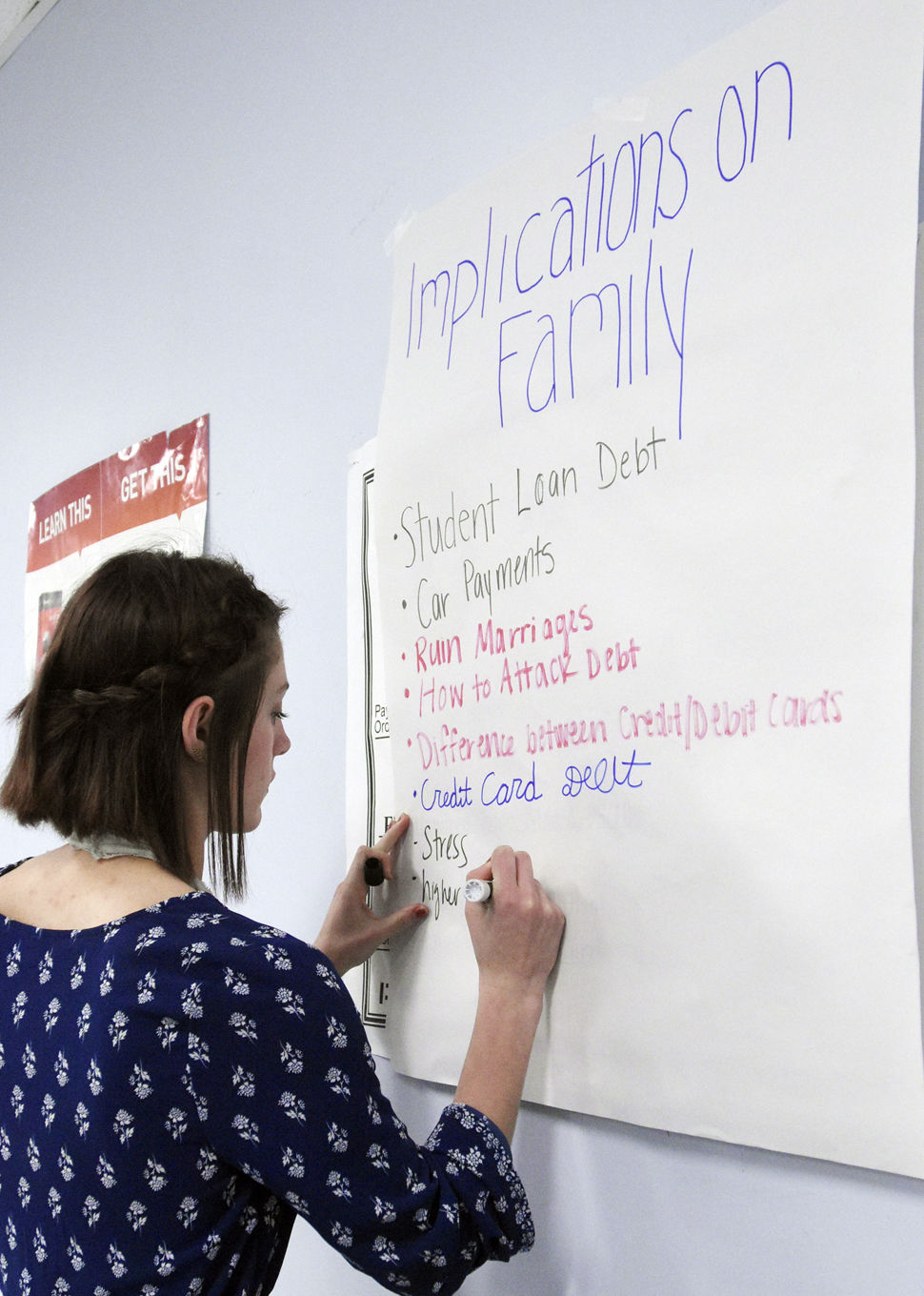 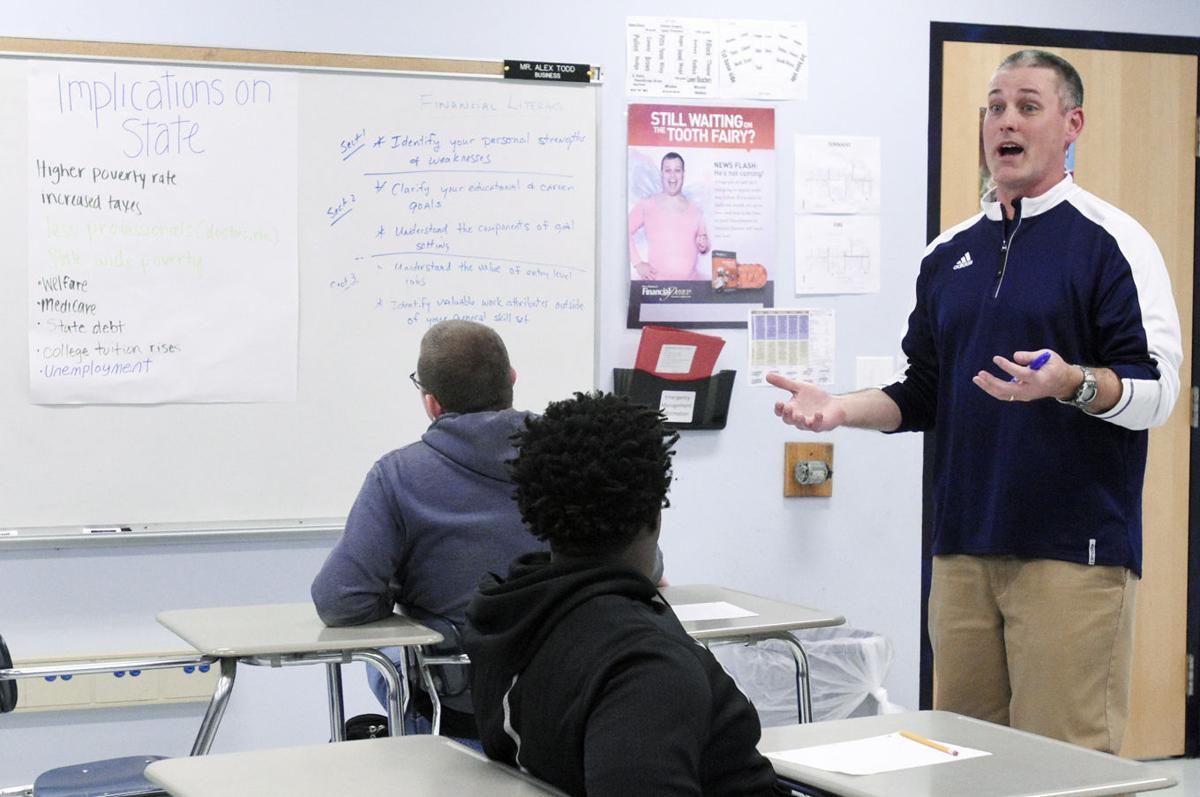 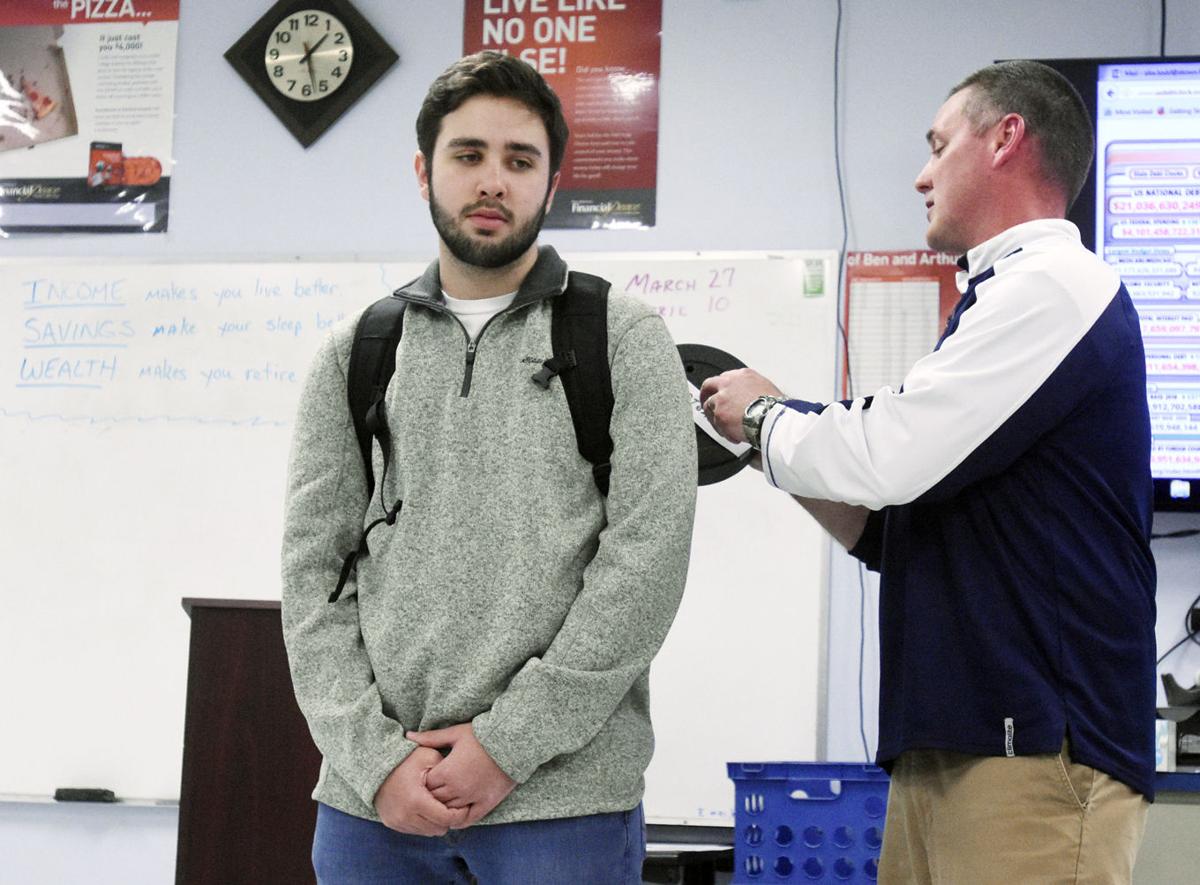 Elizabethtown High School financial literacy teacher Alex Todd loads a weight representing a source of debt into a backpack being carried by student Ryan Clement during class Tuesday at the high school. Todd was illustrating to his students that debt has an impact.

Elizabethtown High School financial literacy teacher Alex Todd loads a weight representing a source of debt into a backpack being carried by student Ryan Clement during class Tuesday at the high school. Todd was illustrating to his students that debt has an impact.

Alex Todd has advocated for a financial literacy graduation requirement for 10 years. Monday night, the state of Kentucky moved another step closer to making that requirement a reality.

The state Senate voted 35-3 in favor of House Bill 132, which was sponsored by state Rep. Jim DuPlessis, R-Elizabethtown.

The bill was amended in the Senate and now will go back to the House for a vote. DuPlessis said passage “is kind of a foregone conclusion.” In Feb­ru­ary, house members passed the bill 68-24. The bill would need a signature by Gov. Matt Bevin before becoming part of high school curricula.

“I believe that this bill will have more impact on the future of the Com­mon­wealth of Kentucky than most of the bills that we have on the floor this year,” Parrett said Monday on the Senate floor.

Todd said watching the Senate vote on the bill was overwhelming.

House Bill 132 would require a high school student to complete at least one course that meets financial literacy standards, which will be developed by the Kentucky Department of Education. The requirement would apply to ninth-grade students starting in the 2020-21 school year and each year after.

DuPlessis said changes in the Senate were made because KDE wanted additional flexibility to have programs such as Junior Achievement teach the standards.

HB 132 was passed March 8 out of the Senate Education Committee. DuPlessis said he had to fight behind the scenes to get support for the bill.

He said members were concerned the bill would become an unfunded mandate, so he crafted the bill with KDE with that concern in mind. Schools could use existing coursework and teachers to satisfy the requirement.

“It mandates that every student be taught a laundry list of financial literacy topics, but it doesn’t mandate how it’s done,” DuPlessis said.

Todd said financial literacy education is important because almost every problem in the state can be tied back to money.

“If we want to turn this around, that has to start with the average Kentucky family,” he said.

Todd said states that have passed a requirement see benefits in two to three years after implementation.

“Average saving rates go up, debt goes down and credit scores go up,” he said.

Todd said if the bill becomes law, the next step is to make sure the requirement is effectively introduced.

He credited the leadership of Al Rider and Davette Swiney of the Central Ken­tucky Community Foun­dation with helping the requirement to come to fruition.

“I’m proud that the legislature understood that we got to start something not from the top-down, but the bottom-up,” Todd said.

A house bill that would require high school students to receive financial literacy education is heading to the state Senate for consideration.