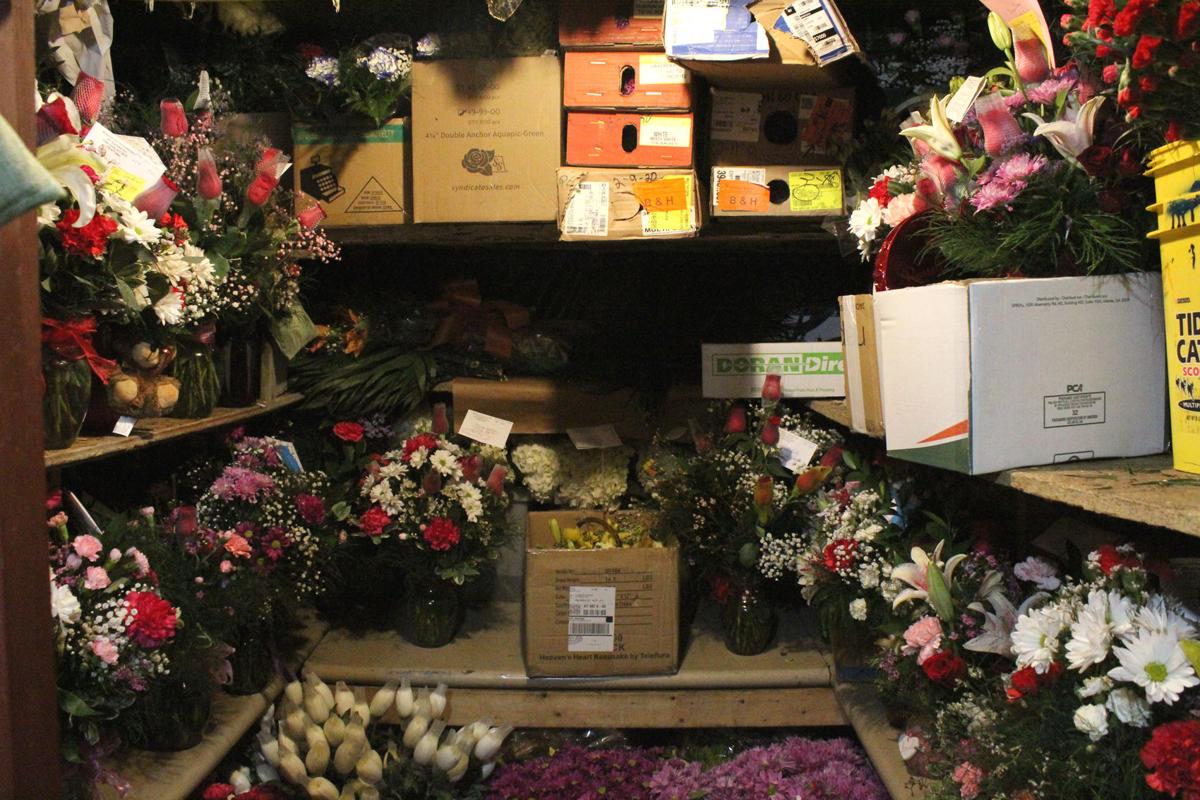 Pre-ordered Valentine’s Day flowers stack up one of the coolers of Blossoms & Heirlooms on Thursday in Vine Grove. Owner and manager Gayla Blackwell said they have seven coolers used to house pre-made flower orders. 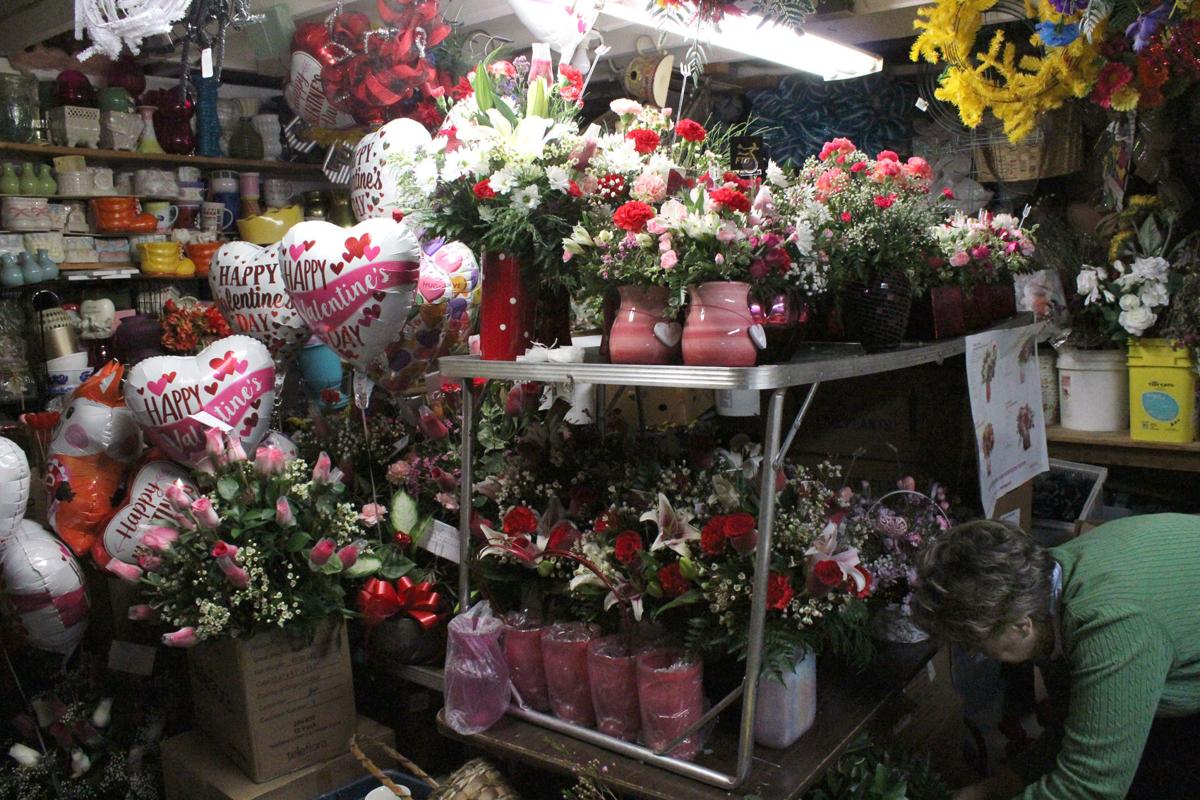 Pre-made Valentine’s Day orders stack up in the basement of Blossoms & Heirlooms on Thursday in Vine Grove. Owner and manager Gayla Blackwell said these orders will accommodate the large amount of walk-in orders they’ll fulfill today. 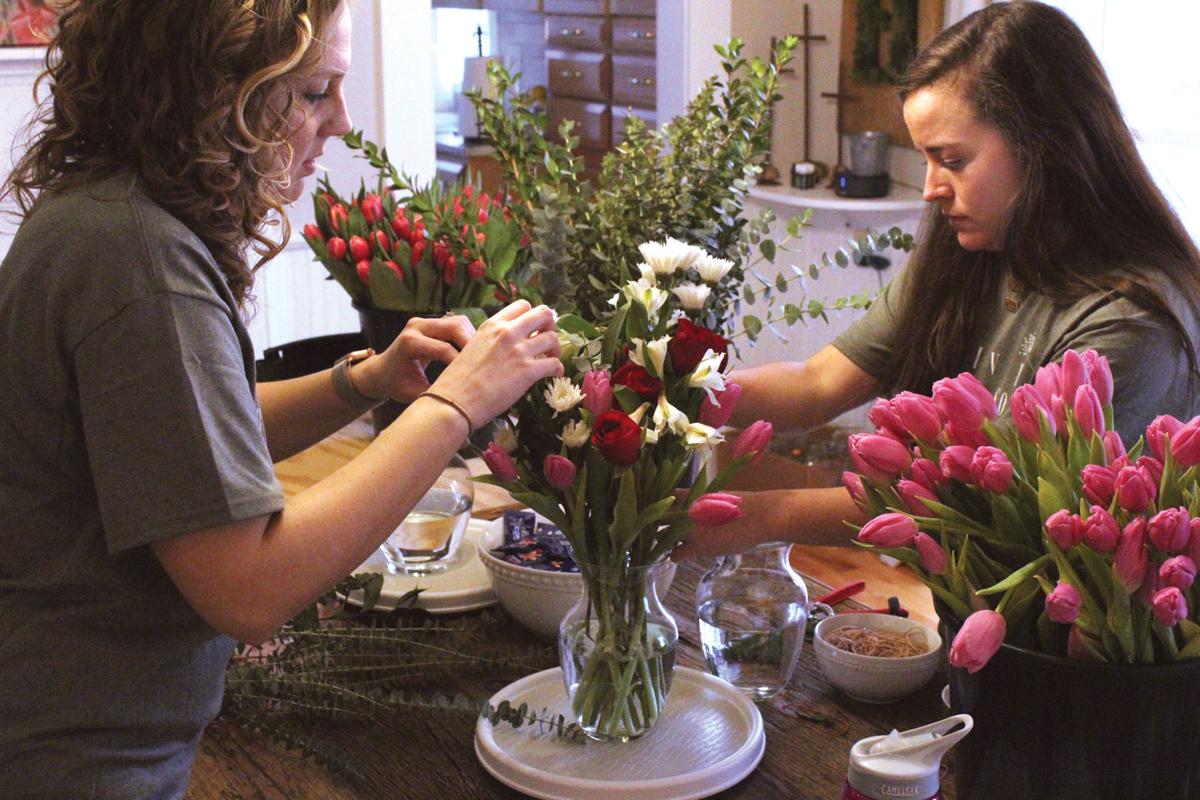 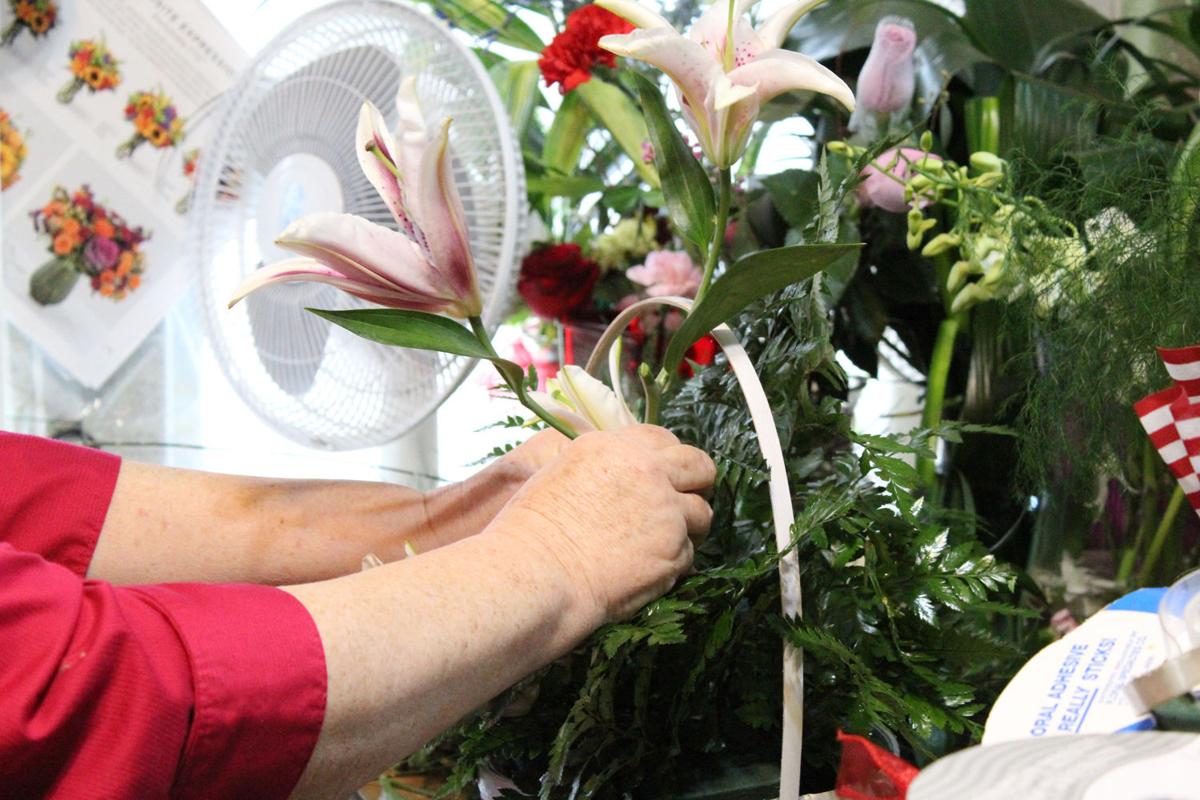 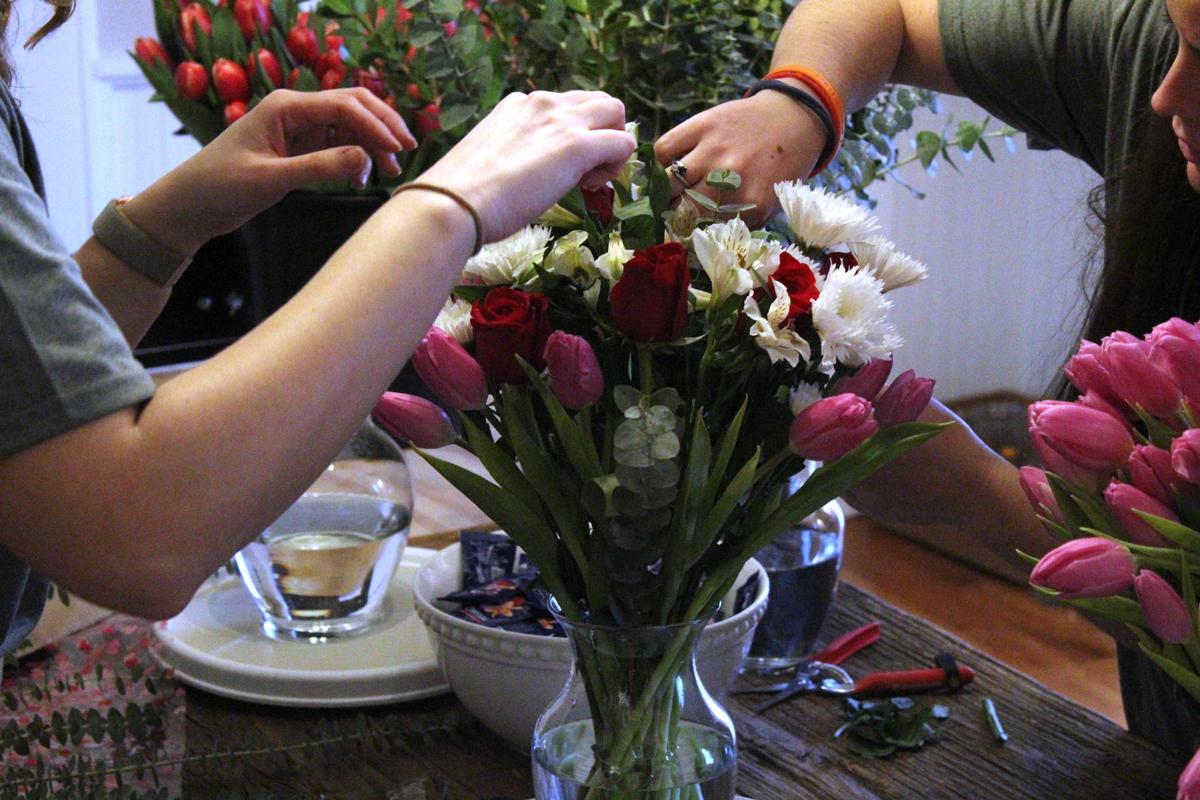 Allison Pike and Madison Henry put together a flower arrangment in Henry's home on Thursday in Glendale. Henry began flower farming a few years ago after her husband Mitchell died of cute myeloid leukemia.

Pre-ordered Valentine’s Day flowers stack up one of the coolers of Blossoms & Heirlooms on Thursday in Vine Grove. Owner and manager Gayla Blackwell said they have seven coolers used to house pre-made flower orders.

Pre-made Valentine’s Day orders stack up in the basement of Blossoms & Heirlooms on Thursday in Vine Grove. Owner and manager Gayla Blackwell said these orders will accommodate the large amount of walk-in orders they’ll fulfill today.

Allison Pike and Madison Henry put together a flower arrangment in Henry's home on Thursday in Glendale. Henry began flower farming a few years ago after her husband Mitchell died of cute myeloid leukemia.

Valentine’s Day is a time meant for love and romance. But for some, it’s not a time to relax.

Gayla Blackwell has been the manager and owner at Blossoms & Heirlooms in Vine Grove for 23 years, she said Valentine’s Day is the busiest one-day event of the year. Workers were busy in the store Thursday putting together arrangements and helping customers.

The biggest thing she has learn­ed when it comes to Valen­tine’s Day is to plan ahead. She said they start ordering product a month from the day using projections from numbers the year before, along with extras they might need on top of that.

“Mainly what I’ve done is stepped up the arrangements ahead of time,” Blackwell said.

She said the business gets wire-in orders from four different places online that take orders for delivered flower arrangements.

People in and out of town will place these orders, but the orders are put together and delivered by local stores such as Blossoms & Heirlooms and the websites take about 30 percent of the order profits.

Blackwell said one of the biggest reasons people may purchase flowers during the week or on early Valentine’s Day is because people like to take the flowers to wherever they work and show them off, which is why they have to prepare early.

Nine delivery people will work to deliver flowers throughout the day across the area including Fort Knox, Brandenburg, Elizabethtown, Radcliff, Mul­d­raugh, Rineyville and Lebanon Junction.

Outside of delivery orders, she said significant portion of her business, especially on Valentine’s Day, are walk-in orders since the business is in the middle of the town.

Blackwell said she has seven coolers, all used to stack and store previously made flower bouquets and arrangements for people looking to grab-and-go some flowers for their loved one.

“So when a gentleman walks in here, he can pick what he wants and he can go or have it delivered,” Blackwell said.

She said on normal business hours, arrangements usually are made on the spot. But on Valen­­tine’s Day, that’s not an option.

“If we waited until they walked in here to make everything, there’s no way we could do it,” Blackwell said.

She said orders a week ahead usually are best. However, the level of preparedness they’ve set should alleviate any issues with orders that are placed today.

She said prices for flowers do increase since the growers that the store buys from also makes them more expensive. She said it’s $69.99 for a bouquet of a dozen red roses for Valentine’s Day.

“I want a customer for life. I don’t want them just for Valentine’s,” Black­well said.

On Thursday, she said the biggest issue she’s worried about Friday is the weather.

If it’s too cold and the flowers stay outside for a certain amount of time, they could freeze and be damaged.

Blackwell said she’s been thinking of calling people who ordered flowers to be delivered to make sure they’re OK with leaving them on their porch, which is what they usually do.

At the other end of Hardin County, flower arrangers and growers Allison Pike and Madison Henry are preparing Valentine’s Day orders for the first time.

They operate the business River Blossoms Flower Farm at Henry’s house in Glendale, where they not only arrange flowers, but also grow them.

River Blossoms is a fresh-cut flower farm. Instead of bringing in flowers from other sources and producers, Pike and Henry grow them themselves.

Henry said she has an estimated ¾ of an acre to an acre of land used for planting flowers on the property. Her farming is small-scale and high-intensity, meaning large amounts of flowers are grown in a compact space.

Pike also has experience growing flowers in a small garden at her home and she said her grandmother and great-grandmother had rose gardens, which she remembers very early in her life.

When Henry’s husband, Mitchell, died in 2017 from acute myeloid leukemia, she decided to start flower farming.

She said she always has had a passion for flowers and decided to pursue work in it instead of returning to her career in dental hygiene.

“I just love the joy and the hope the flowers bring me and that’s kind of why I got into it, to try to spread it with other people,” Henry said.

Last year, she and Pike, who’s a family friend, got into the business together.

“I was just growing kind of for fun, hoping to eventually have a business with it,” Henry said.

They said they started posting on social media the past week to take orders, and now have about 27 so far to fulfill for Valentine’s Day.

Henry said they wanted to use Valentine’s Day as a marketing tool to get their name out since a good portion of their product will be grown in the next few months.

They both started planting a large amount of flowers August through October, which will grow around spring. Henry said April and May most likely will be their busiest time.

For Valentine’s Day, they’re selling a $20 market bouquet wrapped in paper and a $30 vase bouquet.

Pike currently works full-time as an office manager at the county attorney’s office, so Henry will be delivering the flowers herself throughout Glendale, Elizabethtown and Owensboro.

Henry said she would like to see even more business throughout the region including Bardstown, and are planning to do pop-up stands at farmers markets and also are wanting to do subscription services for flowers on possibly a yearly, monthly or seasonal basis.

They’re also expanding their farming at Henry’s property by adding a walk-in cooler within the next month and also updating a shed near the house.

Henry said one benefit of growing flowers locally is that it helps consumers understand more where their flowers are coming from.