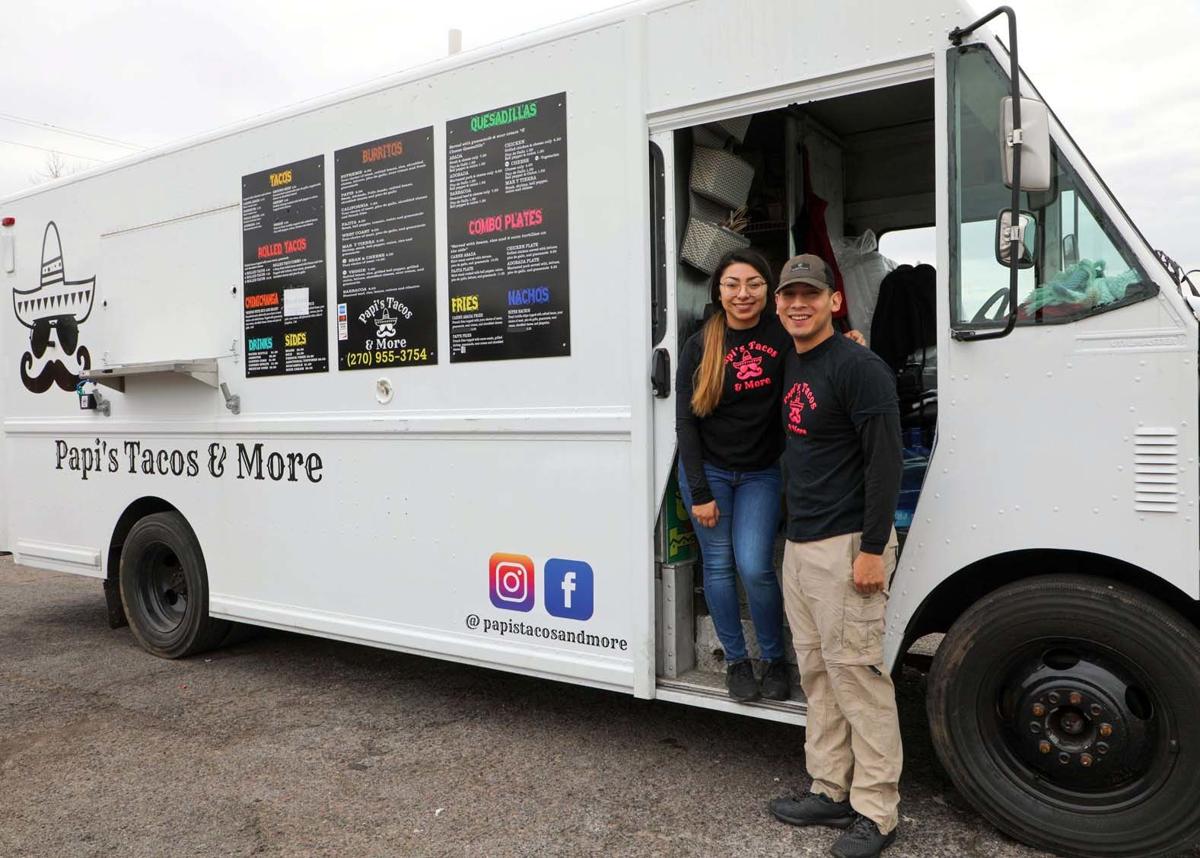 Joshua Vasquez-Sauceda and his wife, Nayely, at their food truck. 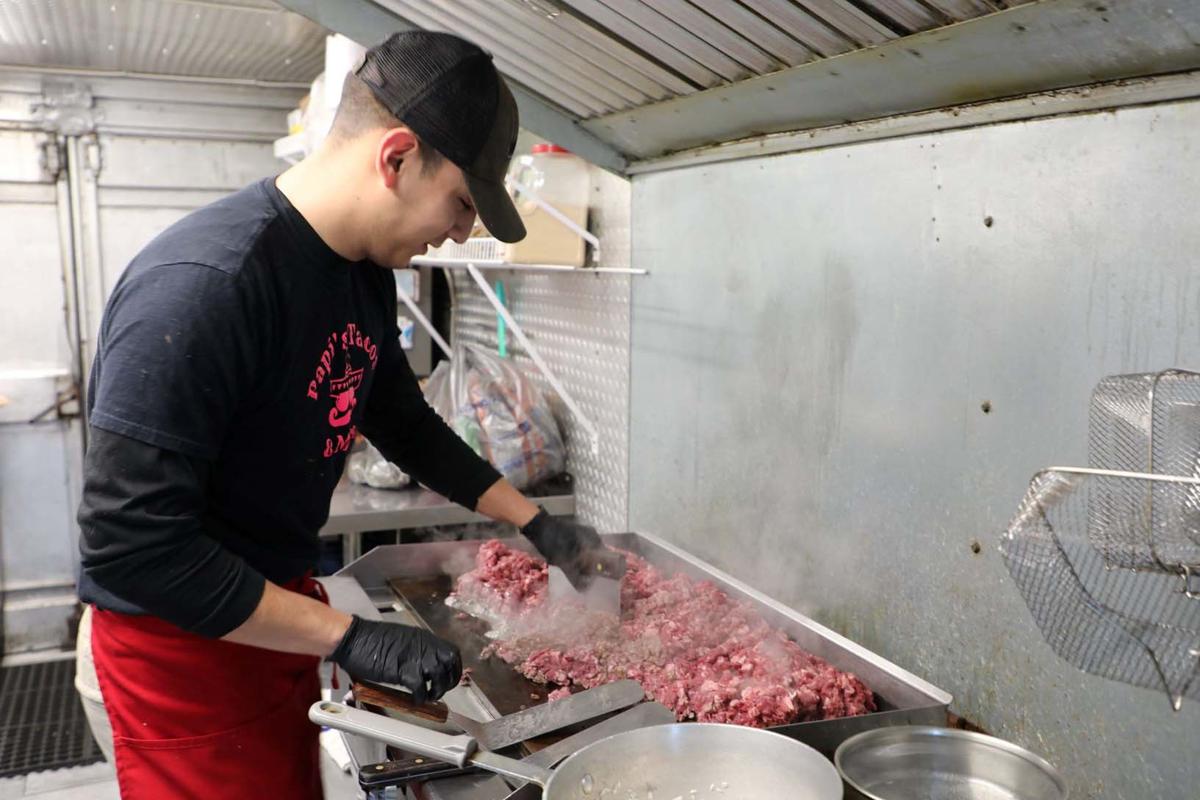 Joshua Vasquez-Sauceda and his wife, Nayely, at their food truck.

Sgt. Joshua Vasquez-Sauceda, a wheeled vehicle mech­anic with 1st Theater Sus­tain­ment Com­mand, decided early in life he wanted to be his own boss.

When he arrived at his first duty station at Fort Knox, he be­gan to make that dream come true.

Upon arriving at Fort Knox, his wife, Nayely, noticed a lack of Southern California-inspired Mexican food and suggested they start a food truck business offering that type of food.

In June 2018, Vasquez-Sauceda purchased a used food truck, combining his savings and money from family and friends.

“I always wanted to open a business so I saved up all my money from before I joined the Army,” said the 22-year old. “All the way through basic training and AIT (Advanced Individual Training), I never went out and did anything; I just saved my money.”

Now Vasquez-Sauceda and his wife are the owners of Papi’s Tacos & More, a Mexican food truck that operates outside the Wilson Gate of Fort Knox. As he nears the end of his Army enlistment, he is putting all his time and energy into operating the food truck.

Before her husband started terminal leave Jan. 13, Nayely had been operating the truck on her own, with help from three employees.

Vasquez-Sauceda said his father-­in-law also played a large part in getting the business off the ground.

In June 2018, his father-in-­law, who once owned a Mex­i­can restaurant in Dallas, moved to Fort Knox and stayed for six months to assist Nayely with the cooking and help them get the business started.

“He came out here and helped us and gave us his recipes,” Vasquez-Sauceda said. “Her dad gave us the whole menu. I have to give credit to him, because without him, we wouldn’t be here.”

His mom, who originally is from Mon­ter­rey, Mexico, also contributed some of her own recipes.

“Everyone contributed here and there,” Vasquez-Sauceda said. “My mom showed me the recipe for the rice and with her dad’s menu, I just started moving the pieces around and then I put it all together.”

But, he also gives credit to the U.S. Army as well.

“The Army helped me out financially and moved me somewhere else where there wasn’t a lot of Mexican food, at least San Diego-Style Mexican food,” Vasquez-Sauceda said. “If I wasn’t in the Army, I don’t think I would’ve opened a food truck.”

Nayely said the menu options are inspired by her hometown of San Diego.

“When we first got here I was homesick, honestly, and I kind of wanted something from home,” she said. “We tried a few places around here and it wasn’t the same. I thought it was a good idea to start something different that not everyone around here had.”

Joshua said he learned about how to mark­et the business while taking a Boots to Business course offered by the Army’s Soldier for Life-Transition Assistance Pro­gram. The course helps transitioning veterans become entrepreneurs.

While in the Boots to Business course, he told one of the instructors how he wanted to expand the business and open a restaurant. “He told me to keep doing what I’m doing until I know when it’s time to expand,” Joshua said. “He said I’ll know the right time to move forward.”

Now that he’s on terminal leave, he is putting in 80-hour-weeks. Although the business usually is only open on weekdays, they occasionally operate the truck Saturdays or to cater events.

When he’s not working on Saturdays, he works on the business finances or website. On Sundays, they go to Louisville to purchase supplies from a food wholesaler.

He said he learned his hard work ethic from his parents, who immigrated to the U.S. from Monterrey, Mexico. His mother cleaned houses and his dad worked in construction.

“My parents didn’t have a lot growing up so when they came here and they worked hard,” Joshua said. “They kept working harder because they could see other people had better things, so my dad would always work hard because he wanted the best for us.

“His drive for working hard got passed down to me,” he added. “I would see that if you work hard, you can achieve whatever you want.”

Joshua said he still wants to expand, but Nayely provides a stabilizing influence.

“I’m so anxious to get a restaurant now,” he said. “She tells me, ‘take it slow, you don’t have to rush it. You’ve only been open a year and a half.’”

But, for now, he still is absorbing the fact he owns his own food truck.

Joshua said his plan is to operate the food truck for another year and then, if he has enough money saved, purchase his own Mexican restaurant.