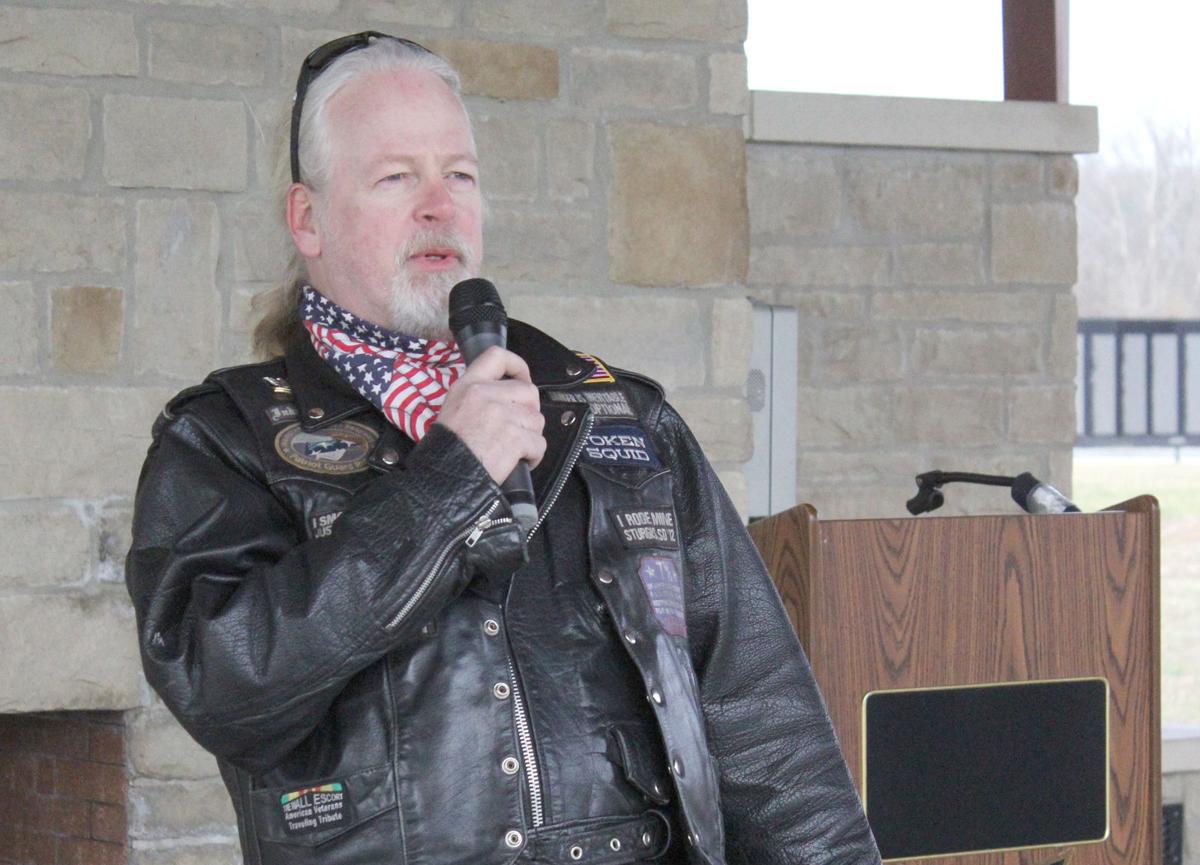 Anthony Price of the Gold Star Ride Foundation speaks during a visit to Elizabethtown to recognize a Gold Star family. The recognition took place the replica Vietnam Memorial Wall at the Elizabethtown Nature Park. 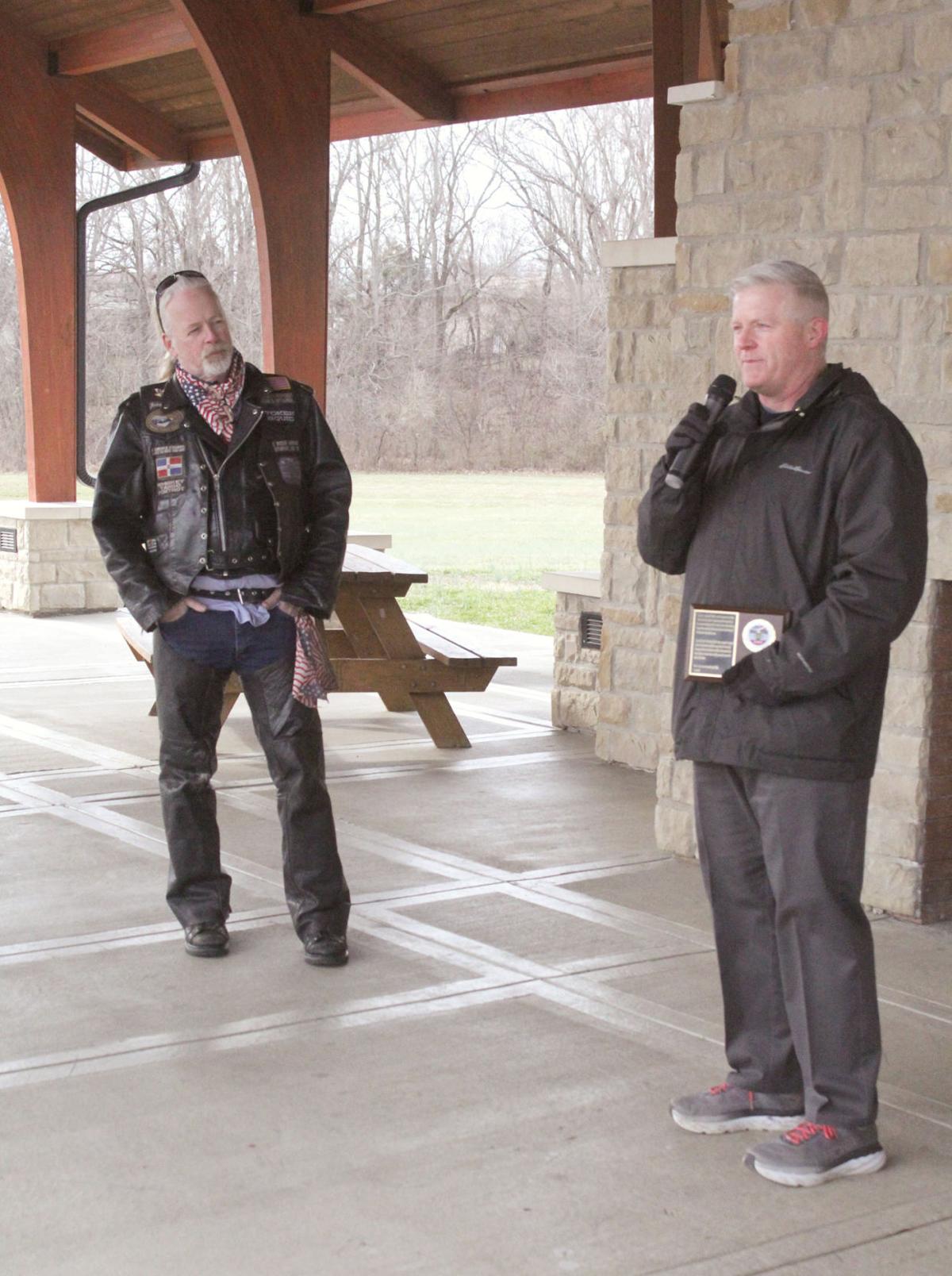 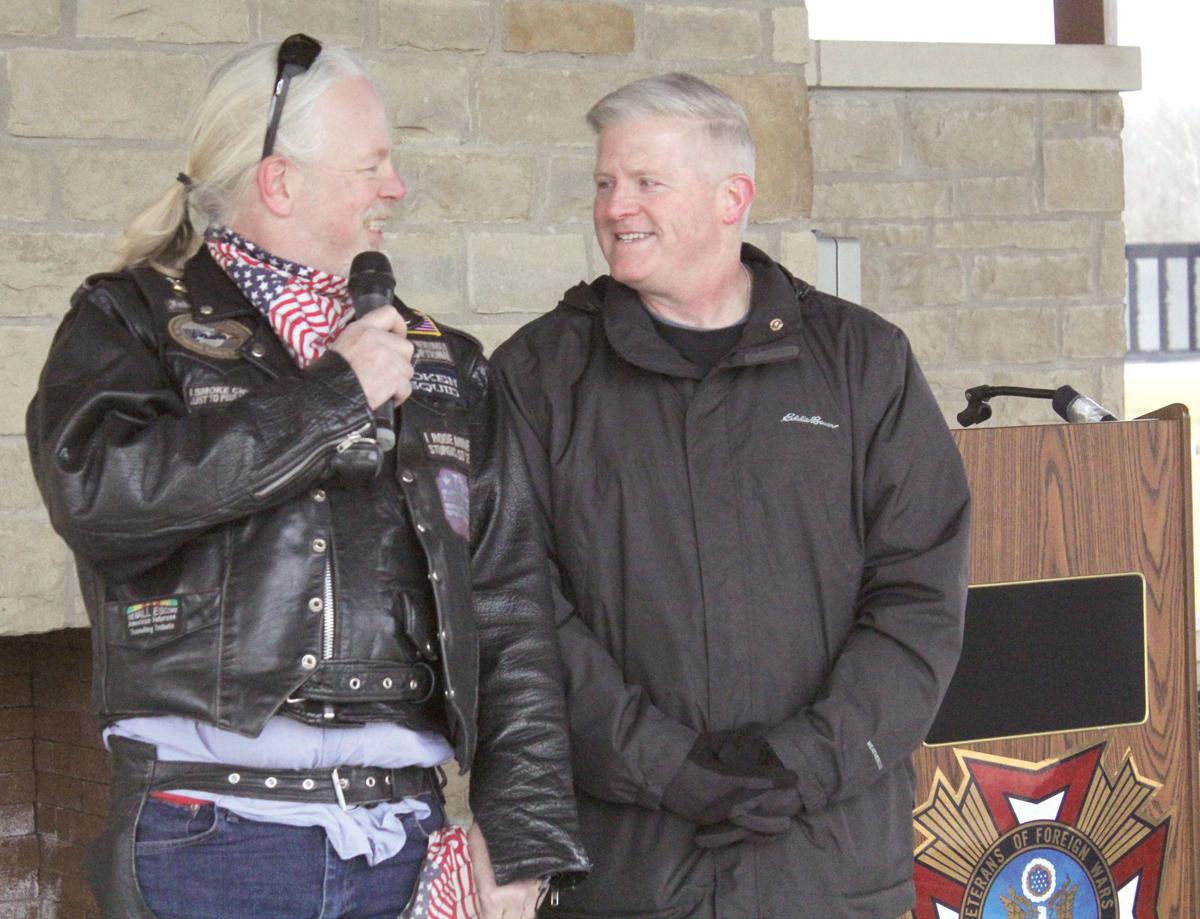 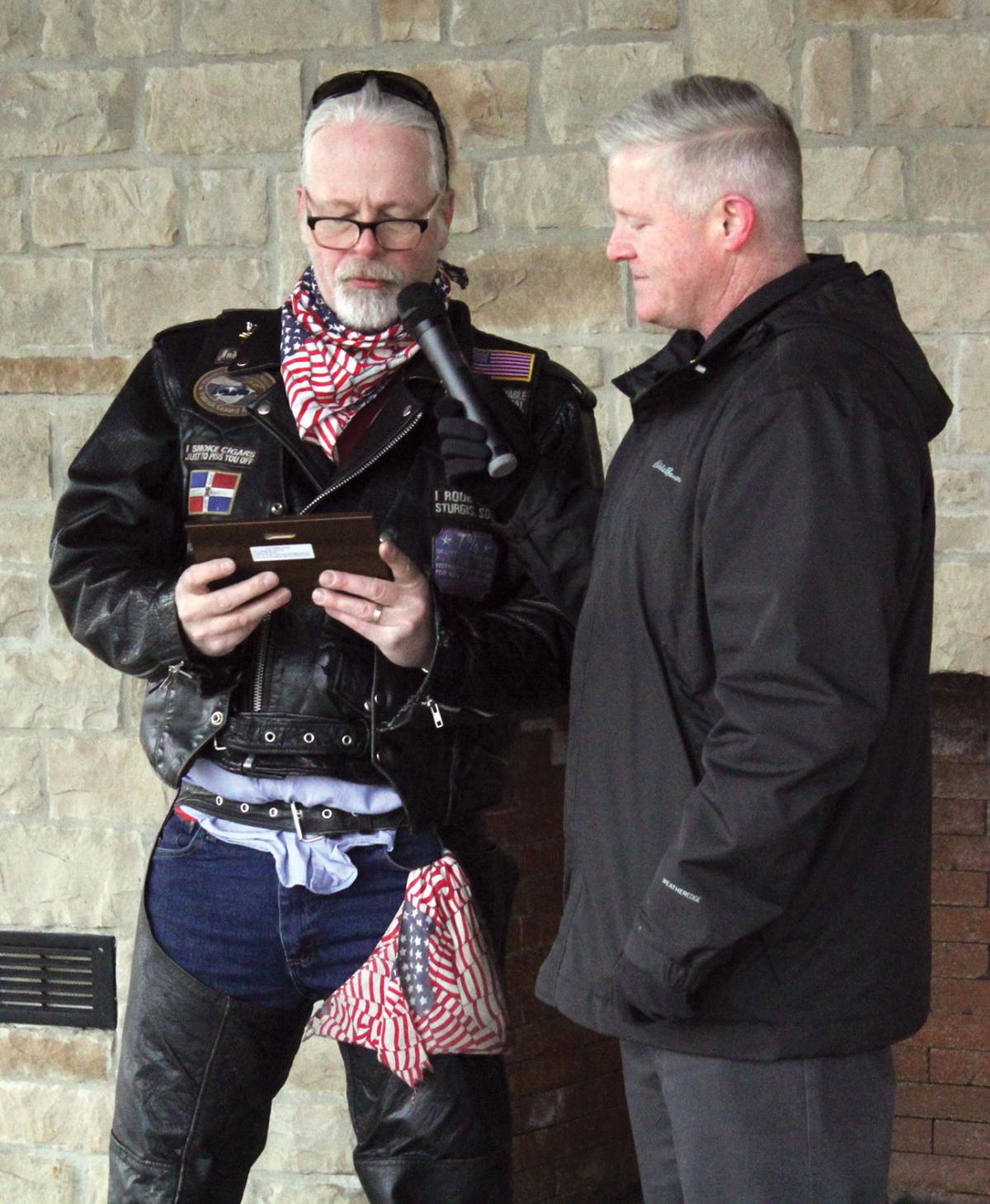 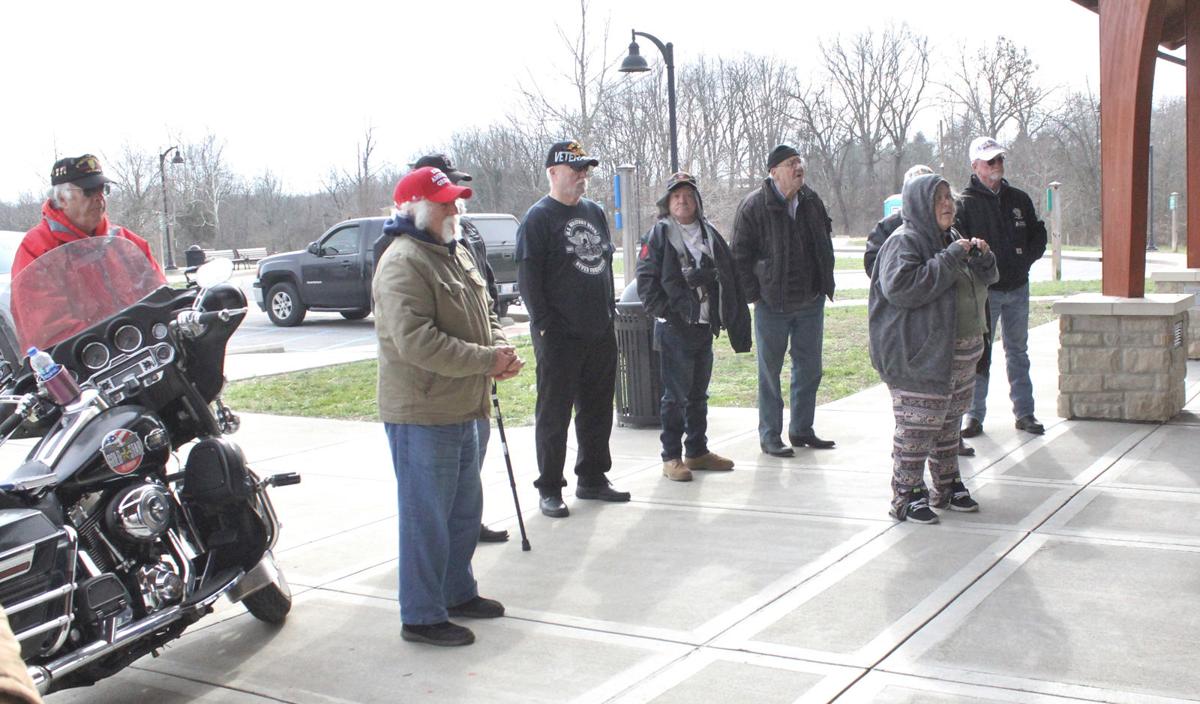 About a dozen people were in attendance Friday at the replica Vietnam Memorial Wall in Elizabethtown for a visit from the Gold Star Ride Foundation. 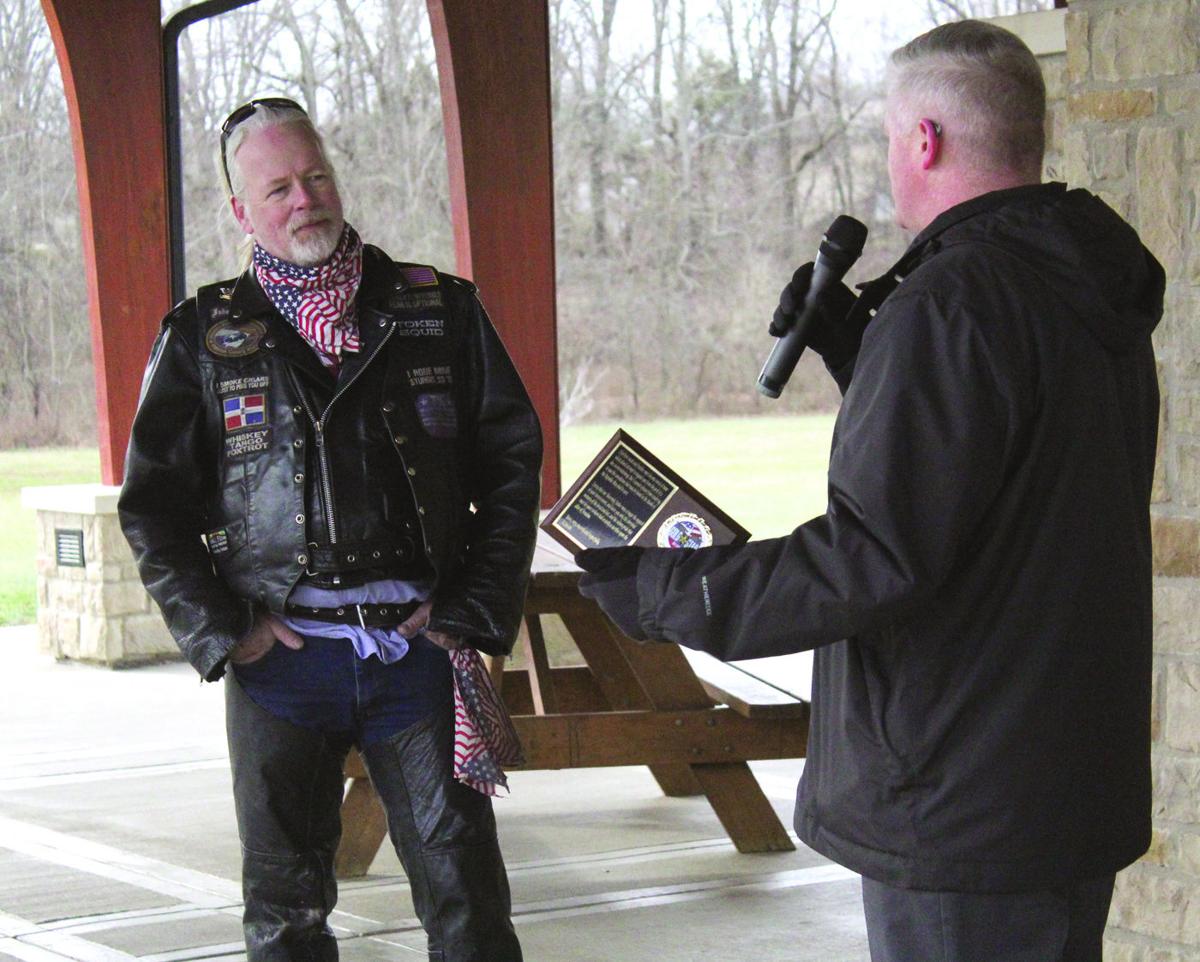 Anthony Price of the Gold Star Ride Foundation speaks during a visit to Elizabethtown to recognize a Gold Star family. The recognition took place the replica Vietnam Memorial Wall at the Elizabethtown Nature Park.

About a dozen people were in attendance Friday at the replica Vietnam Memorial Wall in Elizabethtown for a visit from the Gold Star Ride Foundation.

The Gold Star Ride Foundation’s mission is to go everywhere in the country on a motorcycle and honor and support Gold Star families any way they can.

Anthony Price, co-­foun­der of the organization, made a stop Friday in Eliza­beth­town to recognize and honor Mark Leighton, whose father died in Vietnam when Leighton was only five-months-old.

While standing in front of the replica Viet­nam Memorial Wall at Elizabethtown Nature Park, Price presented Leighton with a plaque inscribed with a portion of President Abraham Lincoln’s letter to Widow Bixby, written Nov. 21, 1864. Lincoln wrote the letter to Bixby after having been informed she was the mother of five sons who died on the field of battle.

The letter said, “I feel how weak and fruitless must be any words of mine which should attempt to beguile you from the grief of a loss so overwhelming. But I cannot refrain from tendering to you the consolation that may be found in the thanks of the Republic they died to save. I pray that our Heavenly Father may assuage the anguish of your bereavement, and leave you only the cherished memory of the loved and lost, and the solemn pride that must be yours, to have laid so costly a sacrifice upon the altar of Freedom.”

Leighton’s father, Sgt. Raymond Leighton, joined the U.S. Marine Corps at 17. He was killed during Operation Texas on March. 21, 1966.

Back then, Leighton said support for Gold Star families was not as prominent as it now is. He said he didn’t realize he was a Gold Star child until 2014. He was in his early 40s and active duty in the U.S. Army. He saw a video where two young boys were throwing a football and one of the boys had a gold star. When the boy said he had the star because his father died during a war, Leighton said it struck him.

Since then, Leighton said he tries to do as much as he can for Gold Star families.

“I try to go speak to the younger families now who have lost their dads or their moms,” he said.

He does it, he says, to show that time keeps moving and they can make it through the loss.

“It’s a loss, but it is something to build upon and try to raise that spirit,” he said during Friday’s recognition. “It means a lot to me that there are people out there who see and want to sit with these families and do what you all are doing. It is greatly appreciated by me and I know all the Gold Star families out there.”

Price said the Gold Star Ride Foundation was formed in 2016. In 2018, he went on his second motorcycle ride for Gold Star families around the country. During that particular trip, Price traveled just shy of 18,000 miles.

“I was on the motorcycle everyday for 56 days, averaging 302 miles a day. I went to 44 states and I got to meet with 64 Gold Star families all over the country,” he said.

For his current, and 10th, trip across the country, Price said his plan is to visit 22 families in 13 states, totaling nearly 4,500 miles. He hopes to complete it in 11 days. Elizabethtown was his second stop.