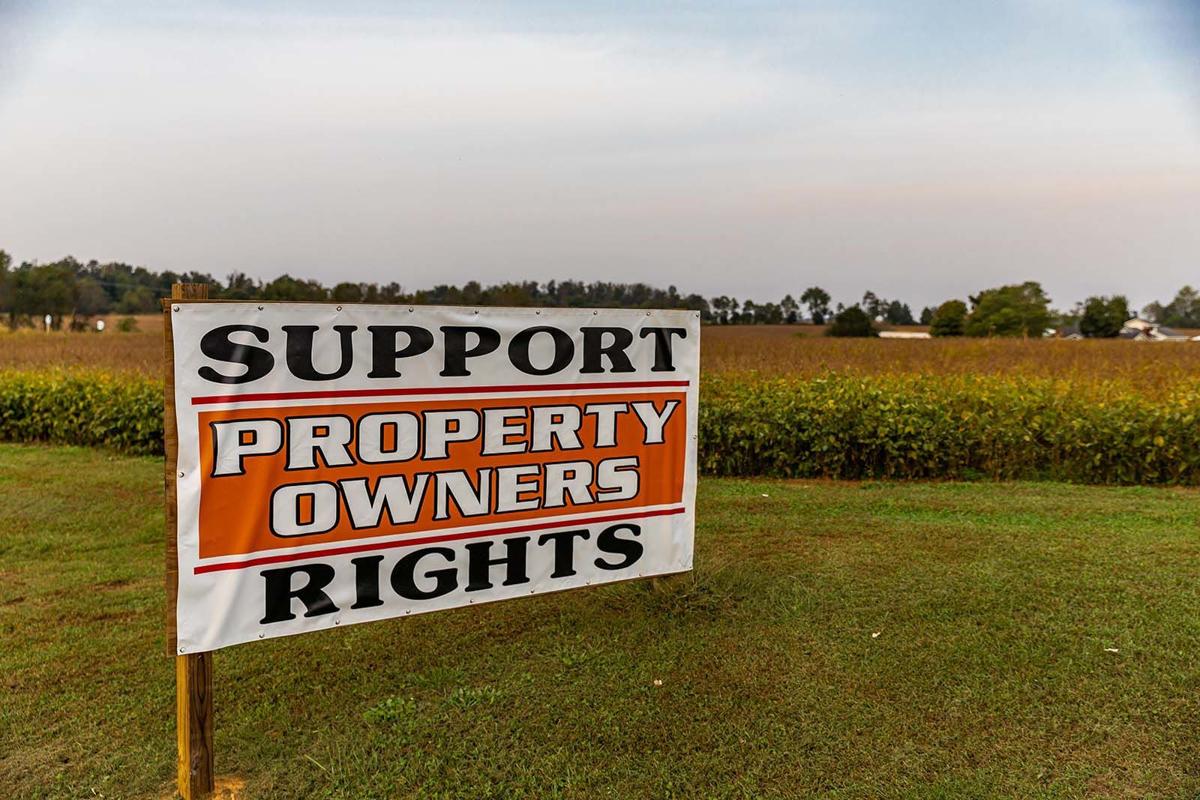 A sign sits on property off North Long Grove Road in Cecilia in reference to an ongoing petition to bring industrial solar to Hardin County. Some property owners in the area have leased their land to ibV energy, who is wanting to build a solar farm in the area. 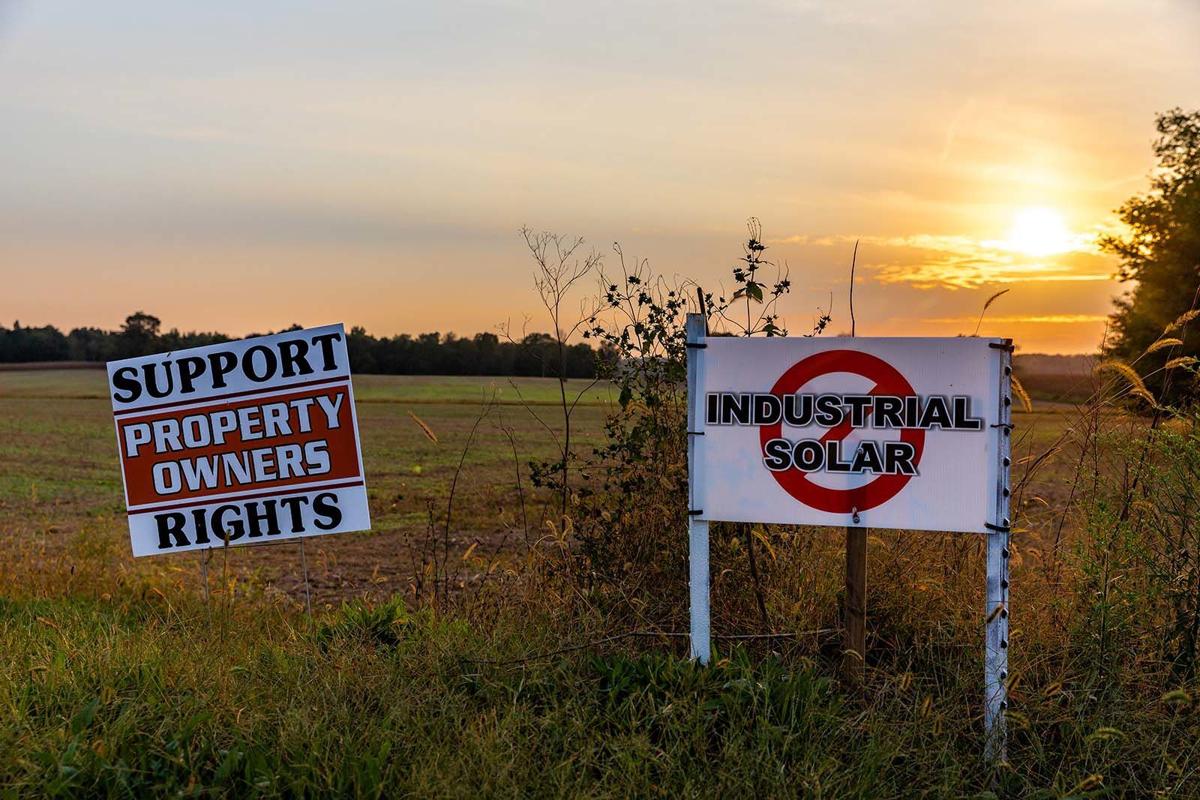 Two signs at the intersection of North Long Grove Road and Franklin Crossroads Road in Cecilia depict both sides of the industrial solar issue. ibV energy has proposed a solar farm in the area. 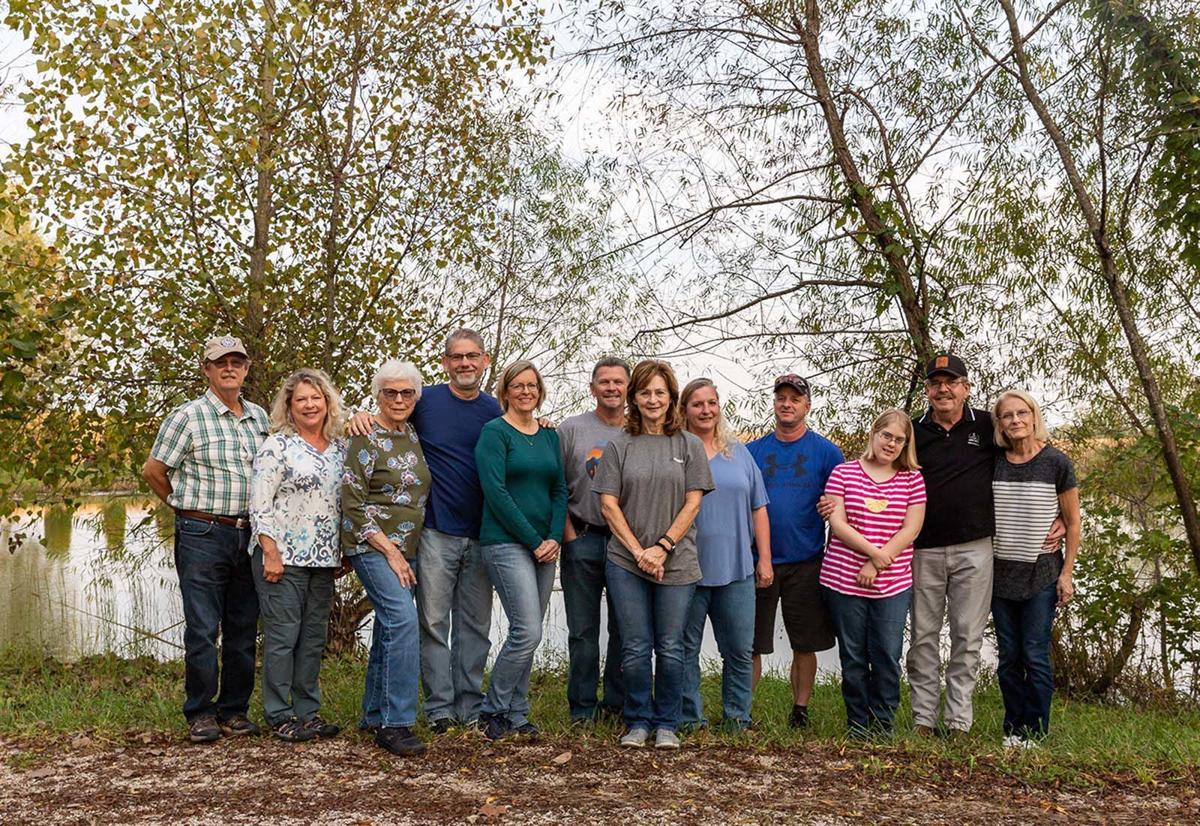 A group calling themselves Hardin County Citizens for Responsible Solar organized to oppose a planned ibV energy solar farm near Cecilia. Some of the members include David and Denise Miller, from left, Joann Taul, Keith and Megan Taul, Chuck Clark, Connie Goff, Trina and Randy Martin, Charish Brantingham, and Paul and Susan Brantingham.

A sign sits on property off North Long Grove Road in Cecilia in reference to an ongoing petition to bring industrial solar to Hardin County. Some property owners in the area have leased their land to ibV energy, who is wanting to build a solar farm in the area.

Two signs at the intersection of North Long Grove Road and Franklin Crossroads Road in Cecilia depict both sides of the industrial solar issue. ibV energy has proposed a solar farm in the area.

A group calling themselves Hardin County Citizens for Responsible Solar organized to oppose a planned ibV energy solar farm near Cecilia. Some of the members include David and Denise Miller, from left, Joann Taul, Keith and Megan Taul, Chuck Clark, Connie Goff, Trina and Randy Martin, Charish Brantingham, and Paul and Susan Brantingham.

When a proposed solar project came before Hardin County’s Planning and Development Commission, several residents from the packed meeting room voiced their opposition.

Since that meeting in June, some of those residents, many from Cecilia, have organized, calling themselves Hardin County Citizens for Responsible Solar.

What Miller said the group opposes is taking up prime farmland in the heart of Kentucky for the project.

“This is taking up so much farmland, thousands of acres,” he said. “We’re not talking about a small area here and everybody in Hardin County should know about this and know the facts. And we think they’ll say, ‘This is not for us.’ ”

Cecilia resident Connie Goff said not only will the solar project destroy farmland, it also will destroy the natural beauty of the area, which attracts sandhill cranes and other wildlife.

Now the group is looking to educate the public on industrial solar, which they are terming the proposed ibV Rhudes Creek Solar project in Hardin County, said Keith Taul of Cecilia.

“Hopefully we are going to represent all of the people in Hardin County to get this information out so that people can make a more informed decision,” he said. “They’ll go into making their decisions, hopefully, with some facts and not just some surface information some solar companies are wanting to present.”

Property owners Clayton, Geraldine and Kerby Grey and Eugene and Dorothy Hill and ibV Solar Energy of Miami, whose parent company is in Germany, is proposing 1,072 acres along Hardinsburg Road, South Black Branch and Hansborough Roads southwest of Cecilia be used for a solar farm.

A zone change for the properties was granted by the commission, but the original request for a conditional use permit was denied.

According to Hardin County Attorney Jenny Oldham, the planning commission will address the flaw in the ordinance Tuesday at its meeting.

The commission will “change the statutory language providing explicit choice to applicants to have a zone change and conditional use permit heard separately by the commission and/or the Board of Adjustments,” Oldham said in a statement.

According to Easton’s ruling, the lack of choice was the primary flaw with the county’s ordinance.

The newly amended ordinance will have to go through two readings, which are expected Oct. 26 and Nov. 9, and ultimately passage with Hardin Fiscal Court before it can take effect, Oldham said.

Oldham said on Dec. 7, the planning commission is expected again to hear the zone change proposal for the solar farm, which unanimously was approved the first time.

The Board of Adjustments will convene Jan. 6 to hear and rule on the conditional use permit from the property owners and ibV, Oldham said.

The Responsible Solar group says the project has major ramifications, including the loss of farmland, reduction in property values and polluting the area’s water supply, with very few redeeming qualities.

“All of these things you won’t hear from the solar energy companies,” Taul said. “All they have to do is say clean energy and everybody thinks, ‘Wow, that’s wonderful.’ ”

The group has been conducting its research into industrial solar, using information from farms in North Carolina and Virginia, and the group is finding the picture the solar companies are painting are inaccurate at best, Taul said.

On top of that, Dan Feeser of Cecilia said the project is “totally against the comprehensive plan we have currently in Hardin County.”

A chapter in the plan says the objective is to “discourage the conversion of prime ag land to other uses and to protect ag land from conflicting development,” he said, adding the area is a natural resources area. “This whole area where there are multiple projects being proposed are using land that has been designated in the comprehensive plan to be saved as the most prime farmland soil in the county. We believe that food is more important than energy.”

What is most problematic about the project is its size and scope, Miller said.

“If you have solar panels in small areas, like even four or five or ten acres, the amount of pollution they create is not detrimental,” he said. “But when you put 200,000 of them together in one area, that accumulates. That’s what makes it so bad.”

Taul said he and his wife, Megan, moved back to his family’s farm in Cecilia knowing the area was zoned Residential 2.

“The farmer has the freedom to sell their land where they can build homes on their land … and make additional money above and beyond whatever crops or whatever they want to do with that land within the zoning requirements,” he said. “I know that. I knew it when I built the house.

“What was not on the radar was solar panels,” he said. “That’s why it requires a conditional use permit, because it goes against what the zoning says and what the intent was and what everybody else thought the intent was.”

Goff said the group understands owners’ rights and supports them, but within the parameters of the comprehensive plan.

“We do understand where farm owners are coming from when they say, ‘This is my land and I should be able to do with it what I want,’ ” she said. “But what you have to understand is, for any of us when you buy a property, just because we have a deed to it doesn’t mean we can do anything to it that we want. We have to worry about the effects on everybody else. We have rights as long as our rights don’t have a negative consequence to everybody else.”

The group proposes the project be moved to other, possibly more economically depressed areas in the state, where it would not consume valuable farmland.

“We believe there’s a lot of places it can go,” Feeser said. “So there’s brown field sites in Hardin County where it could go, there’s industrial zones, there’s highway rights of way. There’s lots of places, old mines and stuff like that, old landfills. There’s a lot of space where these things can go and that’s why we’re not against solar. It’s about putting them in the appropriate spot. Trading food for fuel is not the answer.”

Feeser said the group has three goals: to reject the ibV project under the comprehensive plan, to request a moratorium for all solar projects in Hardin County to allow time to educate the public and imploring Hardin Fiscal Court to develop an ordinance to define and clarify requirements for industrial solar in Hardin County.

Goff said the group has found that only a handful of citizens directly adjacent to the proposed solar site are aware of the project and the group needs more time to educate others.

“What I have found since I started working with this group, I’m in the majority — very few people knew,” she said. “Hardin County as a whole still doesn’t know about this and those who do know don’t know what issues this is going to bring upon them. They have no idea and when I talk to and I tell them what’s it’s going to be like, it’s like, ‘Gee, I didn’t know about this. Why didn’t I know?’ ”

Goff said the group meets regularly and anyone wishing to know more can join to the group’s Facebook page.

“What is the benefit to Hardin County? I can’t find any and I have tried hard to find benefits because I wanted to be fair,” she said. “I started this totally neutral and I wanted to find the truth. The truth is not pretty.”