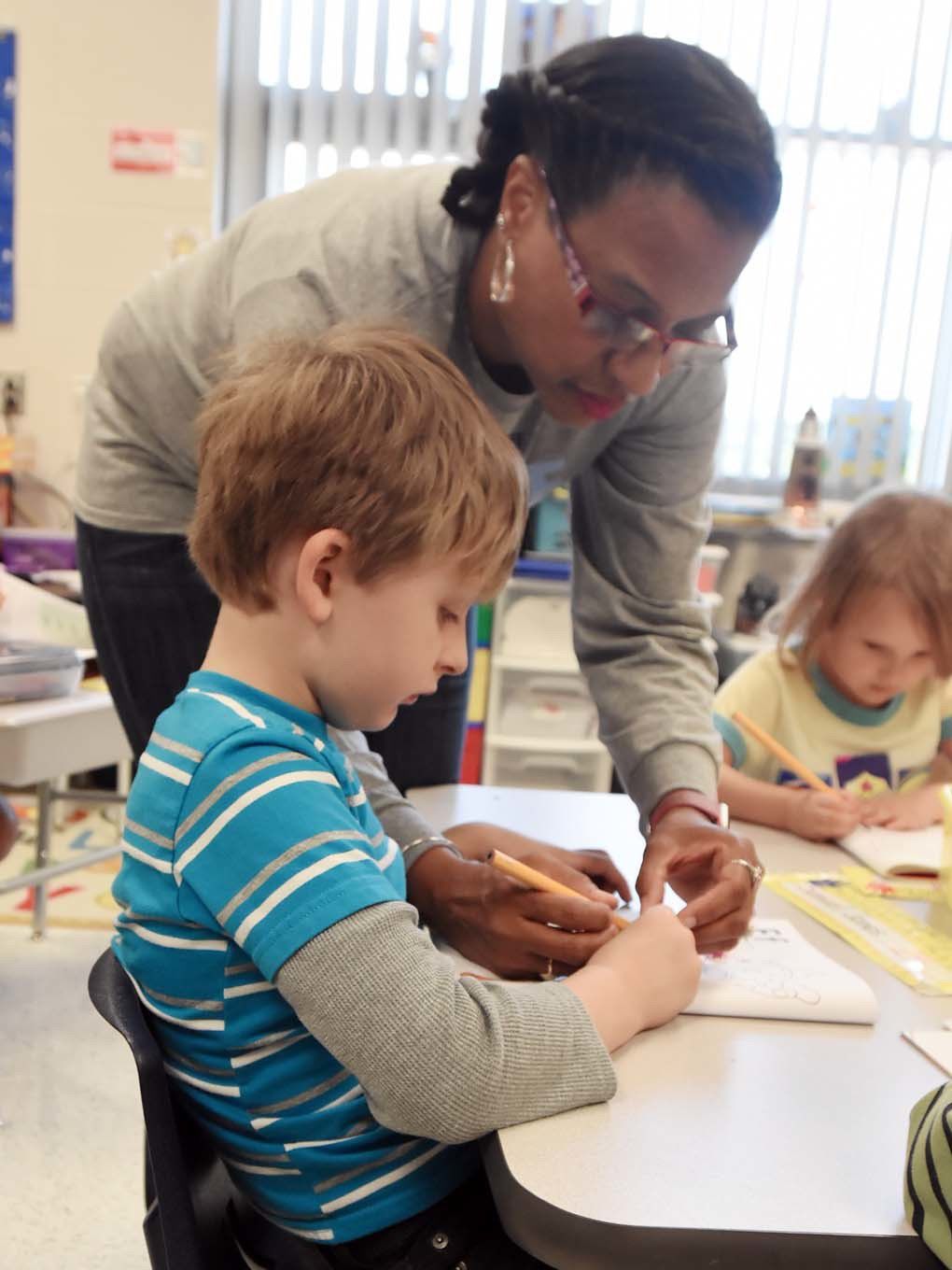 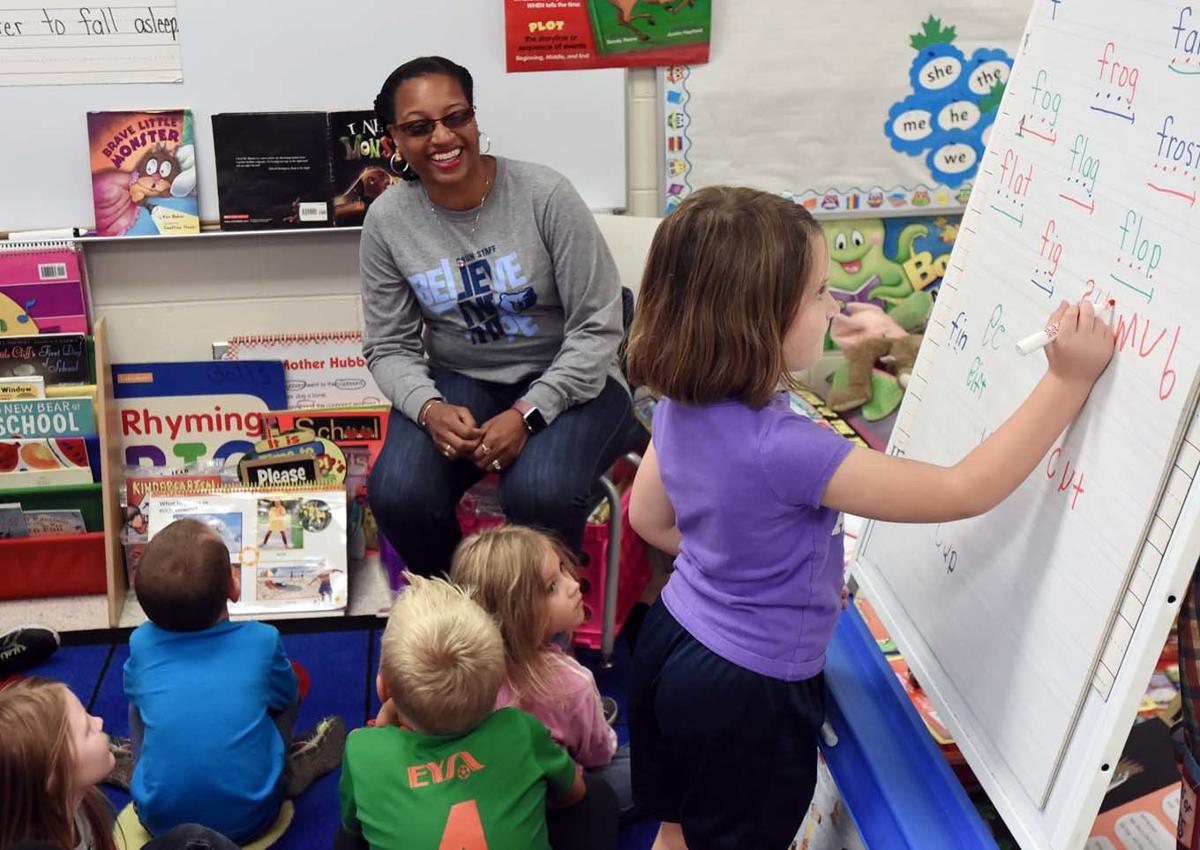 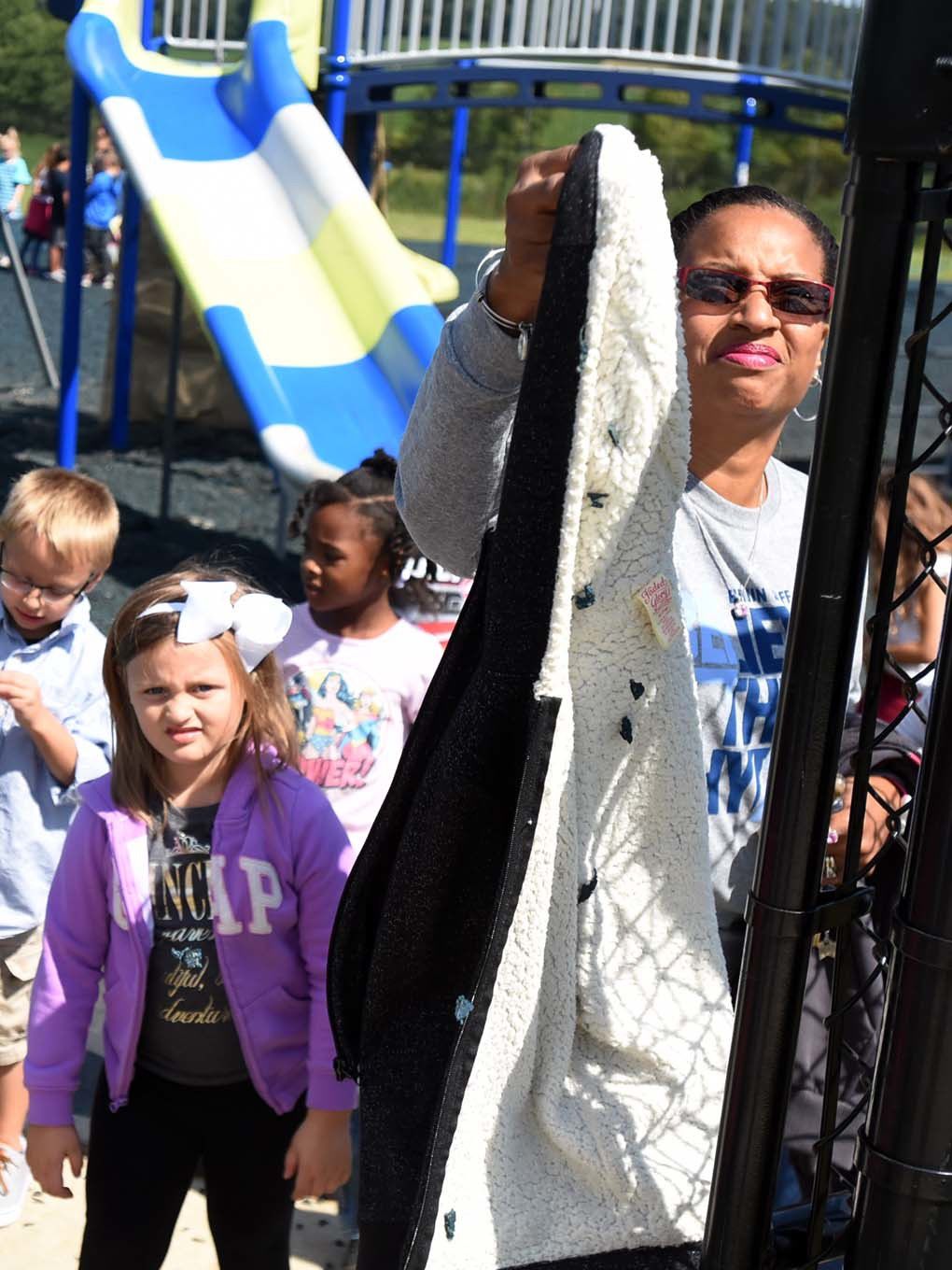 G.C. Burkhead Elementary School teacher Regina Boone hangs a jacket Wednesday on the gate leading to the playground as her class prepares to return to the classroom. The jacket was left on the sidewalk by a student from another class. 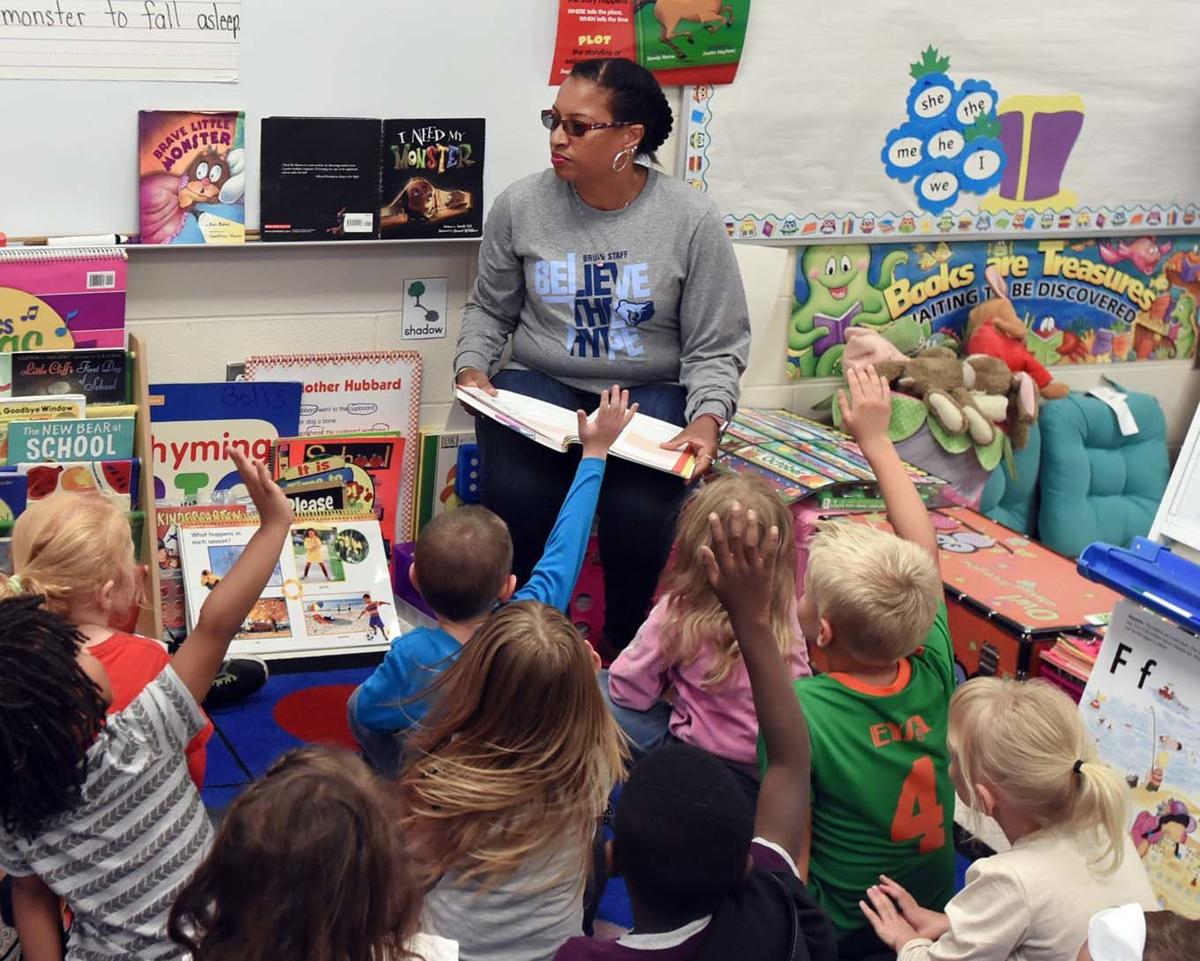 Students raise their hand Wednesday as they wait on teacher Regina Boone to call on someone to answer her question. 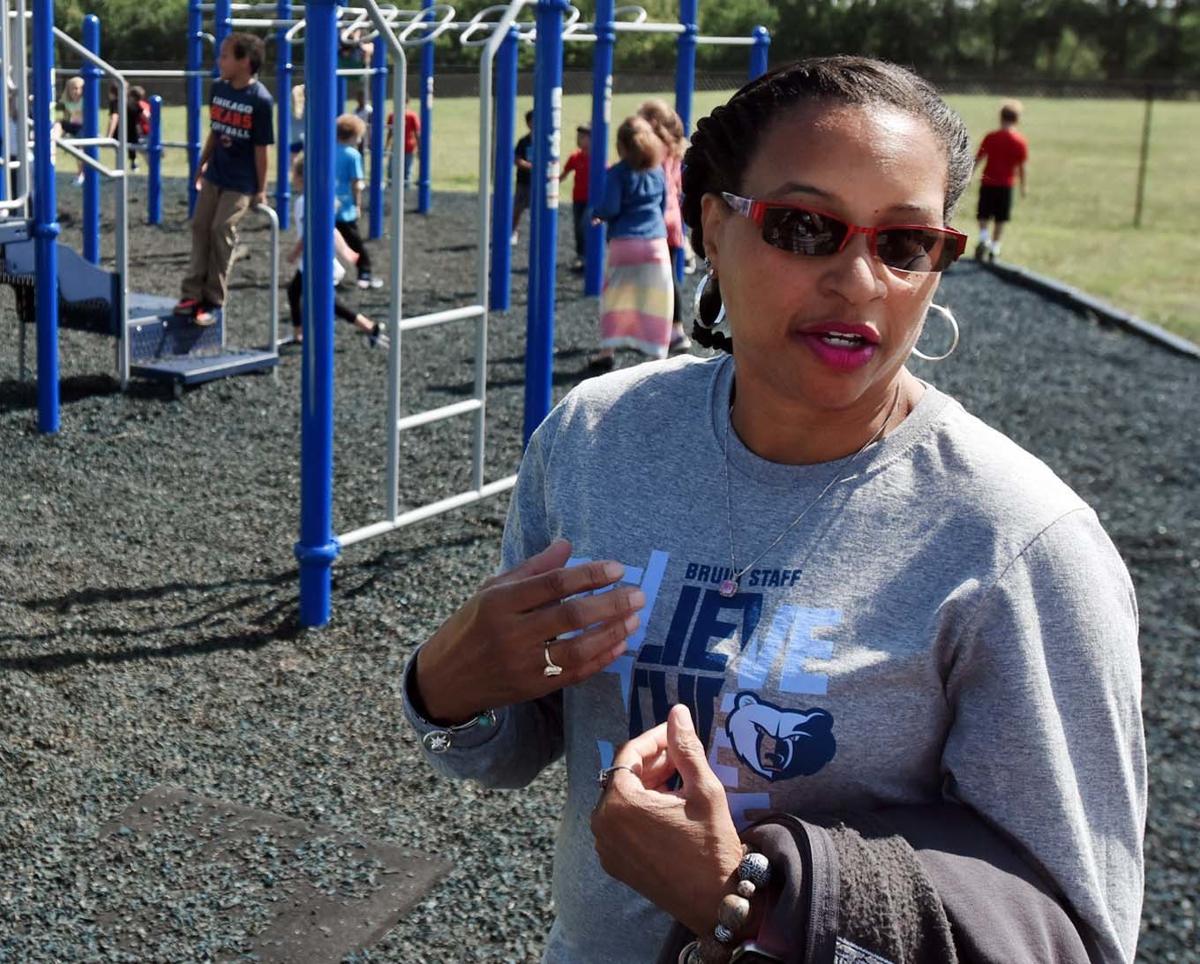 G.C. Burkhead Elementary School teacher Regina Boone is president of a teacher’s union and is preparing for discussion with officials about pensions.

G.C. Burkhead Elementary School teacher Regina Boone hangs a jacket Wednesday on the gate leading to the playground as her class prepares to return to the classroom. The jacket was left on the sidewalk by a student from another class.

Students raise their hand Wednesday as they wait on teacher Regina Boone to call on someone to answer her question.

G.C. Burkhead Elementary School teacher Regina Boone is president of a teacher’s union and is preparing for discussion with officials about pensions.

Regina Boone, president of the Hardin County Education Association, is going door to door, talking with her neighbors about the state’s pension crisis. She’s working to make residents understand what’s at stake as the state prepares to tackle pension reform sometime this fall.

Boone, a kindergarten teacher at G.C. Burkhead Elementary School, said teaching isn’t like other professions and she intends to fight for benefits such as accruing sick days and retiring after 27 years on the job.

“If you are a teacher, at the end of every single day, you are emotionally, mentally and physically drained,” Boone said.

Boone and other board members of the Fourth District Edu­cation Association, which represents 16 school districts through central Kentucky and about 1,800 teachers, met this week to craft a plan for pension reform.

The first phase is educating mem­bers about the retirement system.

“We want to get them educated and then activate them to advocate for themselves,” said Tim Watkins, a Grayson County educator and Fourth District president.

Board members say there’s an uneasiness with all the unanswered questions surrounding the issue. Last week, a consultant group hired by the state released its recommendations on how to fix the system, which has at least a $33 billion unfunded liability.

For teachers, the consultants recommended raising the retirement age to 65, moving teachers into Social Security and a 401k-type of plan along with ending the practice of allowing teachers cash-in accrued sick days.

Watkins said the state of the pension system isn’t the fault of teachers.

“The contract we were hired under is the one we expect to work under,” Watkins said.

Gov. Matt Bevin has yet to release his proposal to fix the system, and he’s expected to call a special session sometime this year for pension reform.

“I’m telling my members at home that we just have recommendations, and to stay informed so you can act when there’s legislation,” said Michelle Porter, a Green County educator and Fourth District vice president.

Boone’s main concern about pension reform is sick-leave days. Right now, teachers in Hardin County receive 10 sick days and three personal days, and any unused days roll over into the next year.

She pays for car insurance in the event she needs it, and it’s the same way with sick days. She keeps them in case a family member or herself becomes ill.

She took issue with an idea that would have teachers cash in their days after 10 or so years.

“But what if you turn them in and then have a catastrophic illness?” she asked.

She said the financial burden could be difficult for teachers to bear.

Other board members said it’s better for students when teachers don’t use their sick days.

“We know nobody can do our job and knows our kids the way we do,” Porter said.

Additionally, working more than 27 years isn’t appealing for board members. Teaching is a demanding job and they said they work around the clock during the school year.

Before and after school is a teacher’s time to plan for the day and do the other work required of them outside of teaching students.

Watkins said members are talking with educators about the teacher’s retirement system. At the end of August, the teacher’s pension fund posted a 15-percent gain for the recent fiscal year. The expected rate of return was 7.5 percent.

The system’s Executive Secretary Gary Harbin said in a news release that the fund benefited from additional funding provided by Bevin and legislators in 2016.

The Fourth District plans to meet with legislators and have public forums. In Hardin County, lawmakers are working together to schedule a town hall meeting.

Boone said HCEA is waiting until after the town hall to decide a course of action on pension reform. She wants to see what the legislators say.

The Fourth District board plans to fight for their current benefits, but they also are concerned about the future of the profession. If the pension changes, will people still want to become teachers?

Elizabethtown Inde­pen­dent Superin­ten­dent Jon Ballard is concerned about that as well, especially at a time when the numbers of new teachers is declining. The talk around the retirement system could make the situation worse, he said.

“It certainly doesn’t help someone in a classroom who is thinking about career options,” he said.

Ballard, who recruited teachers before becoming superintendent, said he would talk about the retirement benefits at job fairs.

“You are not going to be wealthy in this profession, but when you are done, you will be comfortable,” he said he would tell prospective teachers. “That was a big selling point.”

The state has eight pension plans about 500,000 people depend on. We want to hear your thoughts on the pension crisis.

Share your comments with kknott@thenewsenterprise to possibly be part of our coverage.

Three lawmakers representing Hardin County will hold a town hall meeting in the next few weeks to discuss the state’s embattled pension system.