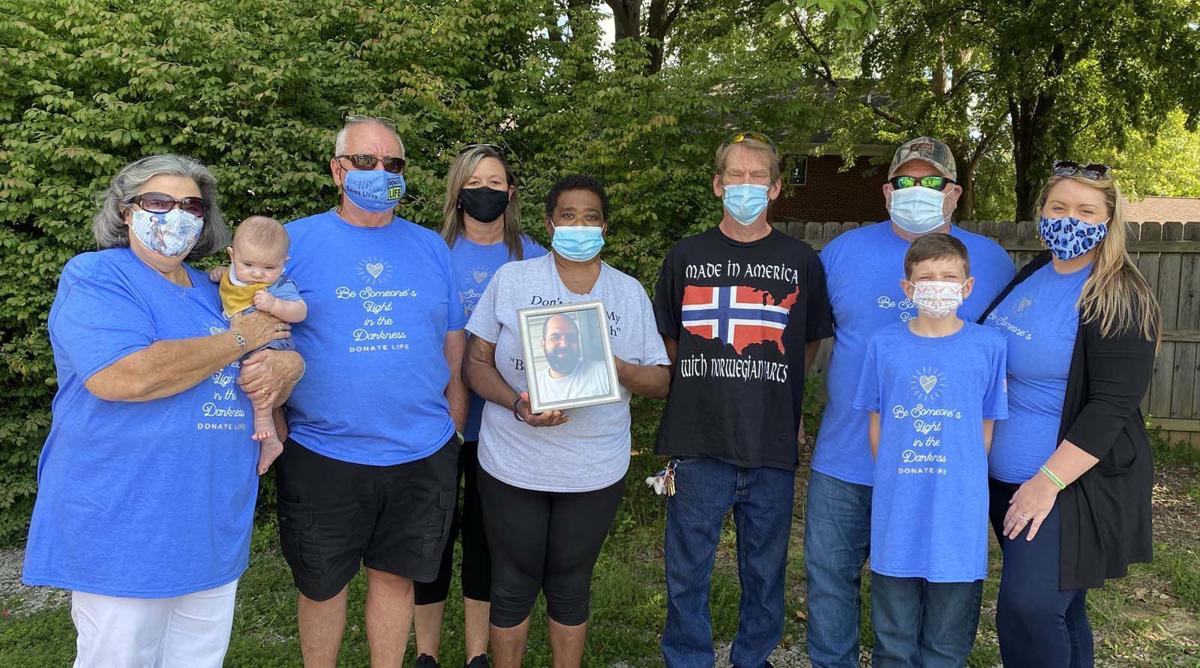 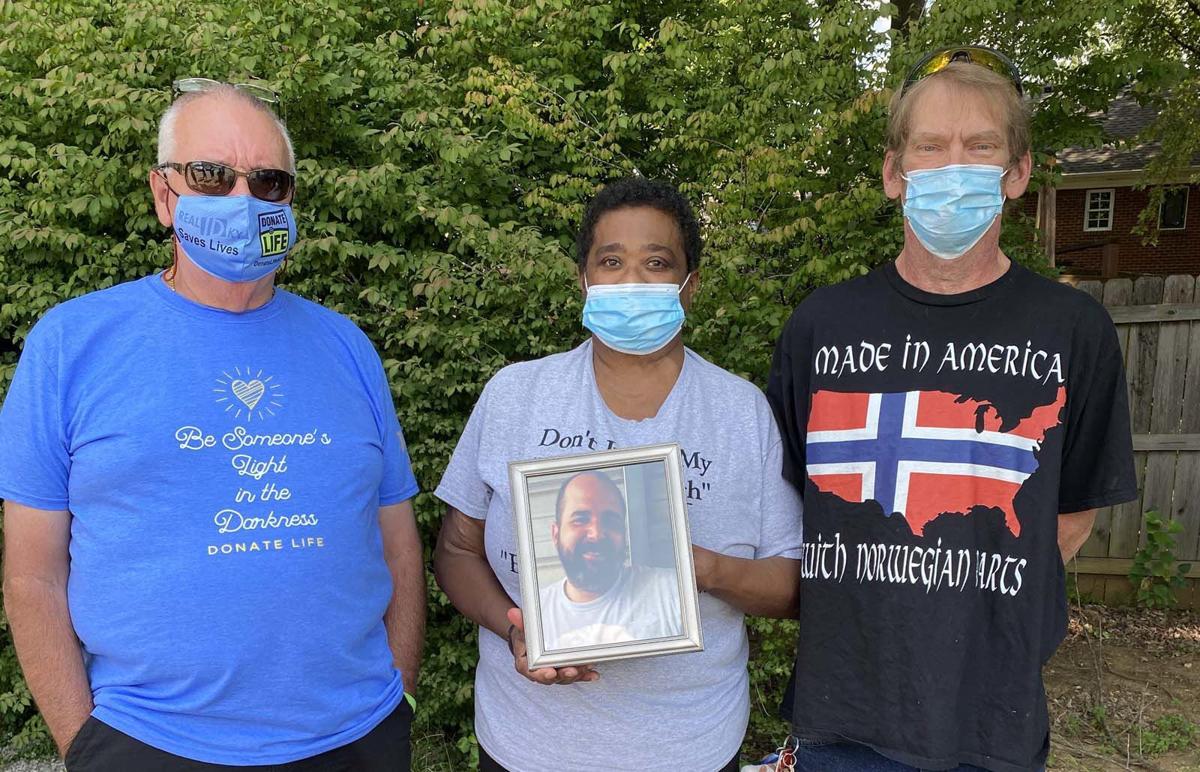 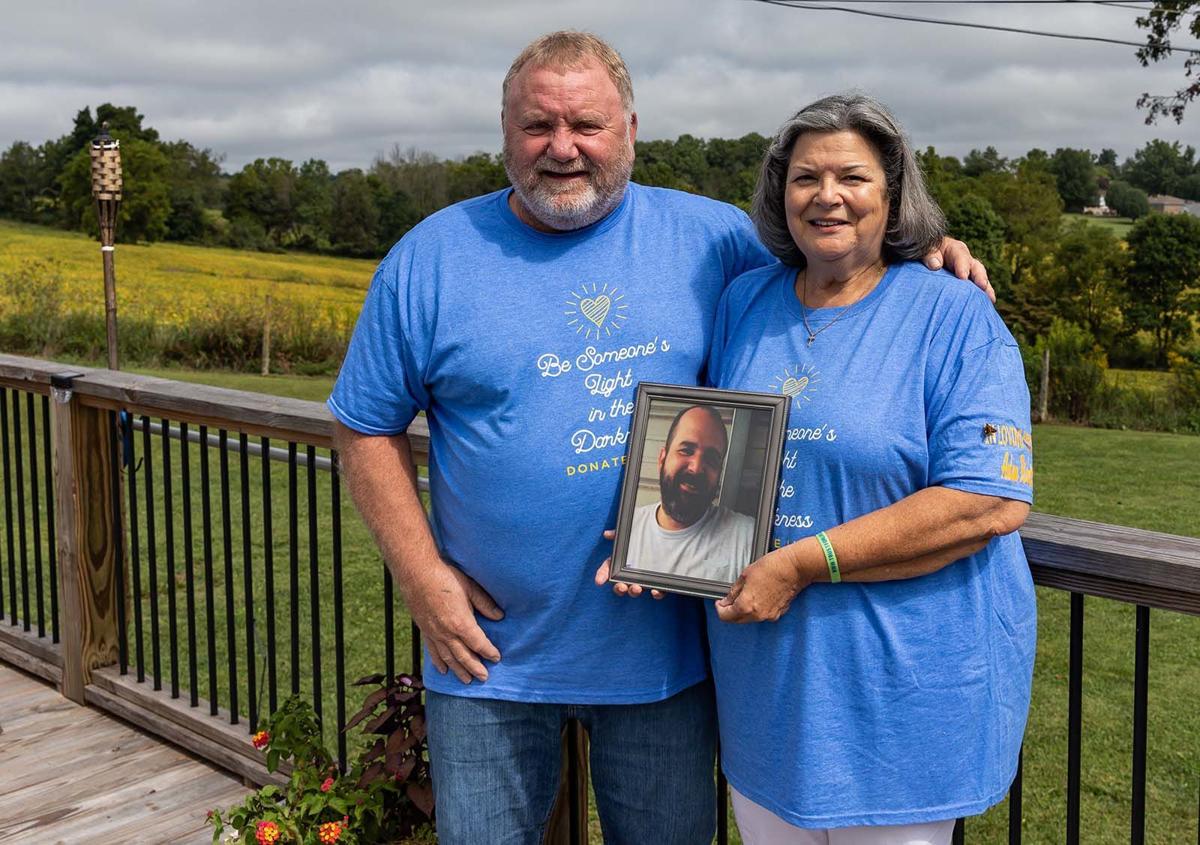 Johnny and Leslie Ricketts hold a photo of their son, Adam, who died in 2019, at their home Friday in Elizabethtown. Adam’s decision to be an organ donor saved three people, whom the Ricketts recently met. 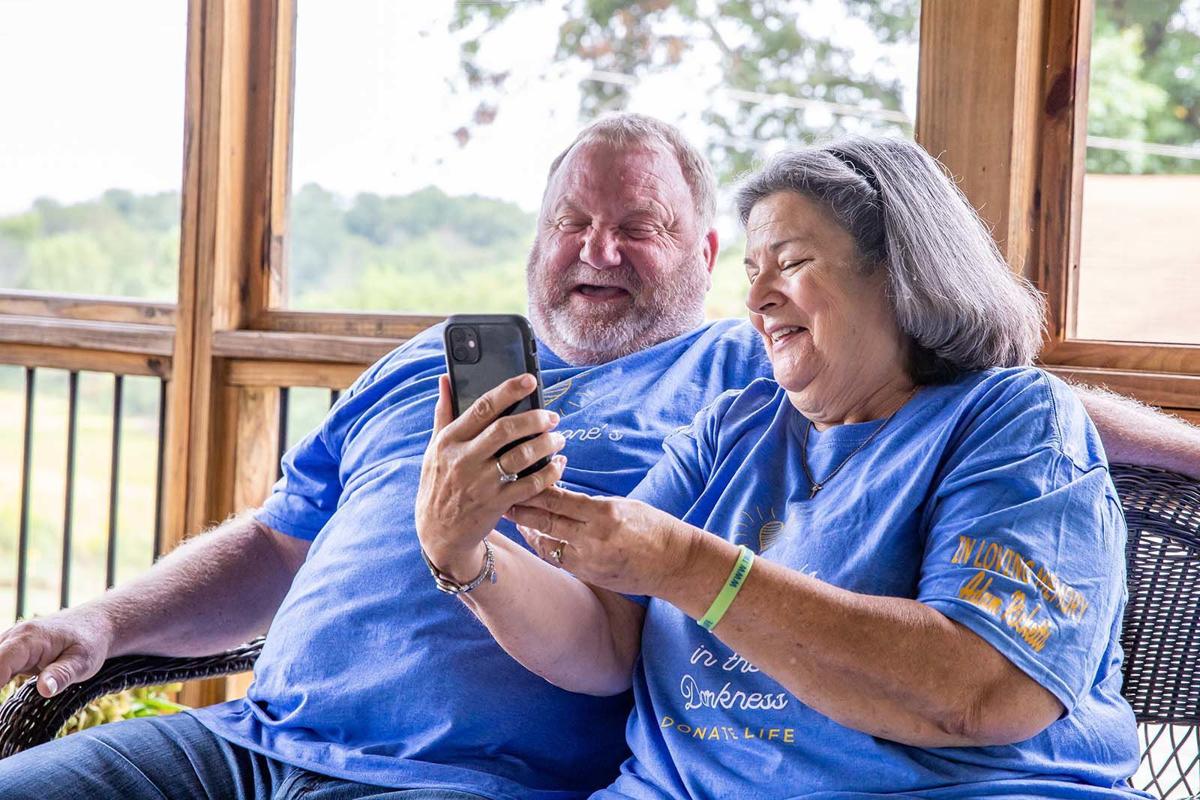 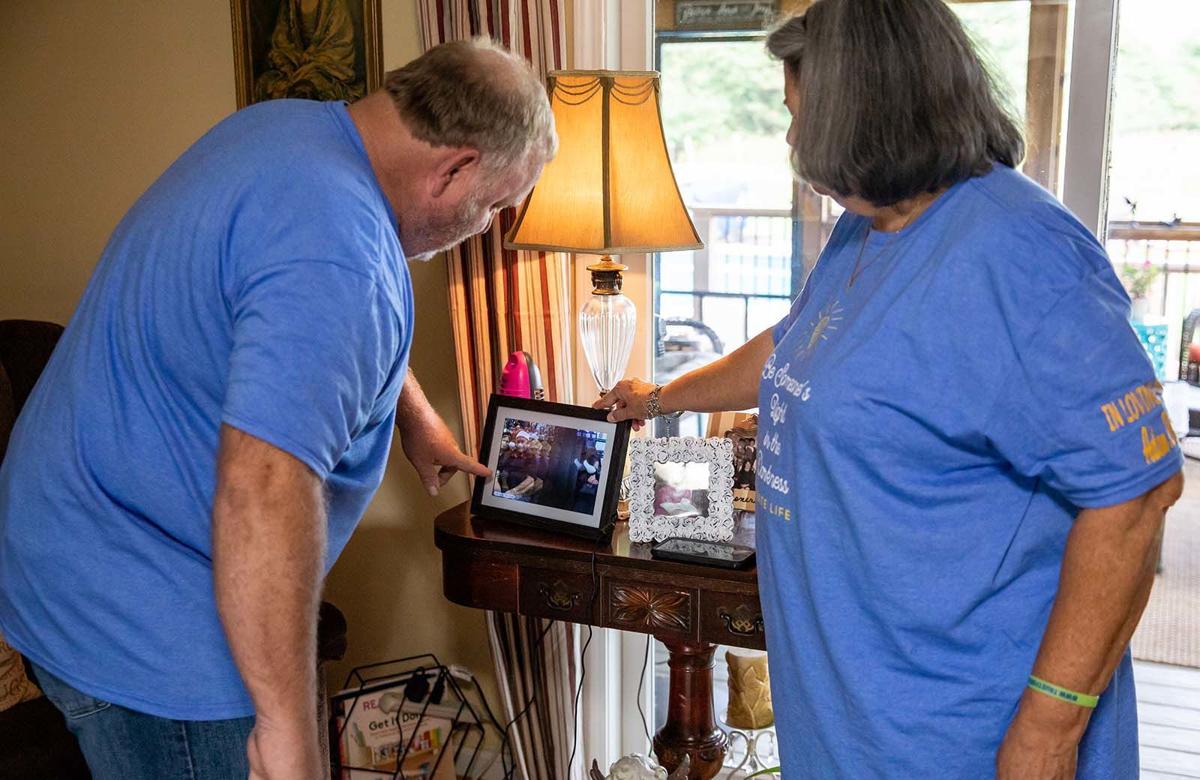 Johnny and Leslie Ricketts flip through family photos on a digital frame Friday sharing stories about their son, Adam Ricketts. Adam was an organ donor whose liver and kidneys helped save three lives.

Johnny and Leslie Ricketts hold a photo of their son, Adam, who died in 2019, at their home Friday in Elizabethtown. Adam’s decision to be an organ donor saved three people, whom the Ricketts recently met.

Johnny and Leslie Ricketts flip through family photos on a digital frame Friday sharing stories about their son, Adam Ricketts. Adam was an organ donor whose liver and kidneys helped save three lives.

The Ricketts family in Elizabethtown is making the best of a tragic situation, thanks in part to their son’s decision to become an organ donor.

Leslie and Johnny Ricketts’ son, Adam Ricketts, 35, died May 24 from complications from a massive stroke that caused a brain bleed. His kidneys and liver have gone on to save three others.

“It was very hard,” Johnny said. “What a parent has to go through to lose one of their kids is very, very tough. I lost my son, but I lost my buddy, too.”

Adam was by all accounts a kind and giving man, who was slow to anger. He spent his time when not working at AGC Automotive enjoying the outdoors, his parents said.

“Adam was so much of an outdoors kid,” Johnny said, describing him as happy-go-lucky. “It just depended on what season it was, mainly fishing. He did metal detecting, ginseng hunting, mushroom hunting, deer hunting, turkey hunting.”

“He was our best friend,” Leslie said. “Personality, you couldn’t have asked for a better child.”

Adam was in the hospital for six days following the stroke on May 19, 2019, during which time the family was approached by Kentucky Organ Donor Affiliates. In the meeting, Adam’s girlfriend, Jessica Berry of Brandenburg, informed the family of Adam’s desire to be a donor, even though his license wasn’t signed.

“The next day someone from KODA came and talked to us,” Leslie said. “Of course, he explained it. Jessica was with us the whole time and she goes, ‘Adam and I have talked about it,’ and that’s all we needed to know.”

Berry dated Ricketts for five years and the couple worked together at AGC Automotive.

“I remember the night, we were just sitting there,” she said. “We were just talking about things, about God, about forgiveness, and we both, that night, decided we wanted to be donors.”

Berry said Adam was the answer to her prayers and he always was willing to help others, calling him her “knight in shining armor.”

“That’s just who Adam was,” she said. “He always wanted to help somebody. … That’s what I loved about Adam.”

Adam also would help pick others up when they were down, which is why the decision to be an organ donor didn’t surprise Berry.

The family said Adam was kept on life support during the week. When it came time for the organ harvesting surgery, an honor walk at University Hospital in Louisville was held as nurses and doctors lined the corridor.

“This was probably the hardest part for me,” Leslie said. “They said, ‘This is the last time you’re going to see him,’ when they put him on that elevator.”

The KODA representative kept the family informed during the entire process to include the surgeries of the recipients and how they were doing, the family said.

“He was very calm, explained everything, and told us to think about it,” Leslie said. “He was there the whole week.”

Leslie said the support they received during the week from friends, family, church members and others is what kept them going.

“I could not tell you the support we got, it helped us,” she said. “That support just meant the world.”

Following Adam’s death and funeral, the family was given the option by KODA to allow the recipients to contact them. The Ricketts decided to allow it.

From there, they received a letter from Lindy Edwards, one of Adam’s liver recipients. Edwards required a kidney after past cancer and hepatitis C complications.

Edwards said writing a letter of appreciation was something he had to do.

“When somebody does something for you that is that overwhelming, I could not go say thank you,” he said. “I couldn’t imagine not saying thank you. So that’s what I did.”

A bond formed instantly, the Ricketts said. Soon, Edwards, 64, of Virginia Beach, Virginia, and the Ricketts were talking on the phone and sharing stories.

“I got Leslie’s paperwork from her about the same time she got mine,” Edwards said. “We reached out and called each other at exactly the same time. It was just really neat.”

After forming a friendship with Edwards, he suggested a possible meeting between all the recipients and the Ricketts.

“He said, ‘You think we could get all three together?’ ” Leslie said. “(KODA) got on it and they got everybody gathered up.”

The Ricketts were able to meet all three recipients and their families in a gathering Sept. 10 in Louisville.

Edwards was joined by Sarah Trumbo of Paris, Kentucky, and Kurt Baldocchi of New Albany, Indiana.

“I don’t know if you could say we were looking forward to it, but we knew it would be heartwarming and bittersweet at the same time,” Leslie said of the meeting.

Trumbo was on dialysis for 13 years and waited more than a decade for a kidney transplant with other attempts failing.

“When this happened, I would love to get to know the family and let them know me,” she said. “I wanted them to always know that their son is living in me.”

Trumbo said when she hugged Leslie at the gathering, a calm fell over her.

“Adam is here with us,” she said. “It’s just like we all became a family.”

“It was the warmest hug,” she said. “I could feel (Adam). There was a connection and we had a bond.”

Johnny said he saw his son in each of the recipients.

“To see their smile, we can see Adam,” he said.

Edwards and Trumbo said the meeting was difficult knowing Adam’s death is what gave them a second chance at life.

“I guess everybody who gets a transplant goes through a little survivor’s guilt,” Edwards said. “You wonder why you were chosen to live and the other person wasn’t. … I’ve just come to the conclusion that we can’t second guess God.”

The Ricketts said the gathering was a step in their healing process and now they feel their family has grown.

And now all of them are advocates for organ donation.

Trumbo said she is a witness to why it is important to sign the back of your driver’s license to be a donor.