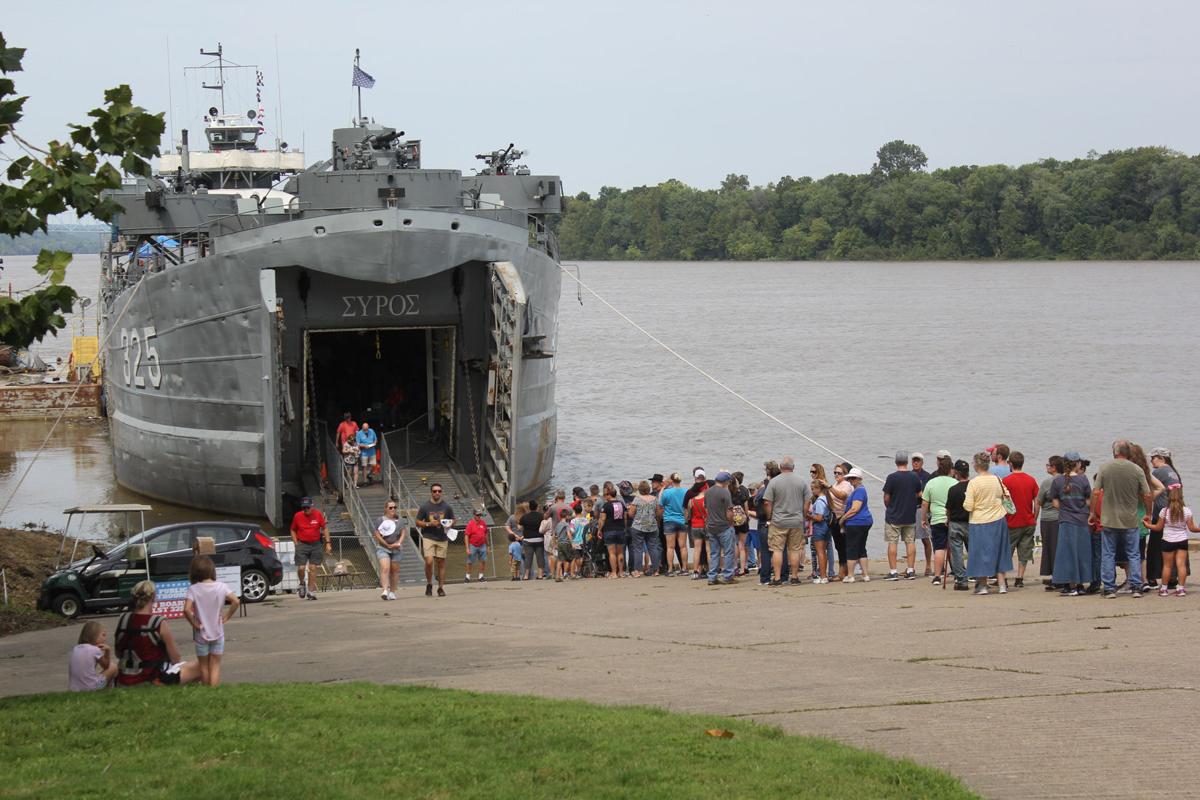 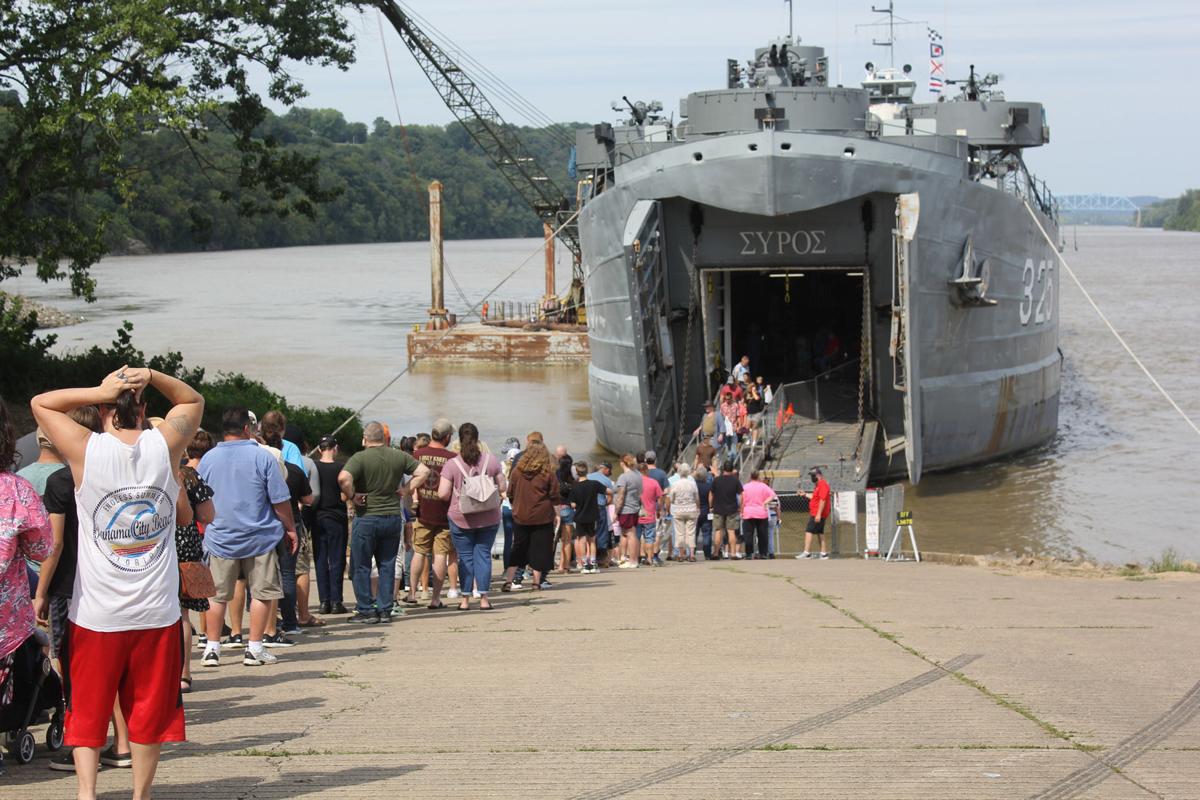 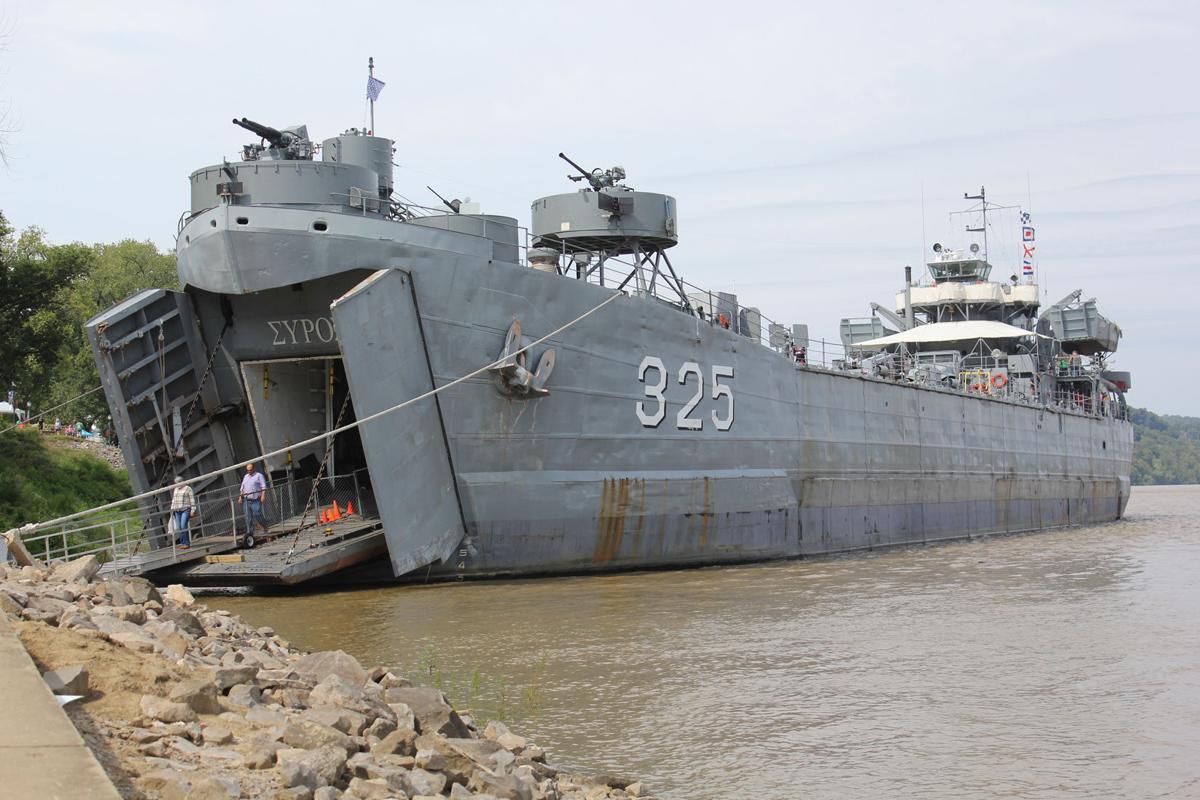 The USS LST-325 was on the riverfront in Brandenburg over the holiday weekend. Several traveled to the area to tour the historic World War II ship.

The USS LST-325 was on the riverfront in Brandenburg over the holiday weekend. Several traveled to the area to tour the historic World War II ship.

The USS LST-325, the last remaining operational personnel and equipment transport still in its World War II configuration, made a stop in Brandenburg over the holiday weekend, assisting in drawing hundreds to the riverfront.

The line to tour the ship Saturday afternoon spanned from the riverfront, up a hill, and around a curve, and included people of all ages.

Among those who visited the ship on Saturday was Butch Love of Charlestown, Indiana. Although other activities were on tap in Brandenburg over the weekend, Love said he came to the area just to tour the LST-325.

“It’s a part of history, and I am really big on the Civil War (and) World War II,” he said, adding he “loved” getting to go on the tour and learning more about the ship. He said he thought it was interesting how many pieces of equipment along with how many men and what the boat was used for.

“One of the big catches for me was this is one of the boats that landed at Omaha on D-Day,” he said. “It helped bring back the wounded soldiers and it dropped off equipment.”

According to the USS LST Ship Memorial President John Tallent, the LST, which stands for Landing Ship Tank, was commissioned in February 1943. It was one of 1,051 of this type of ship that was built during World War II. The ship subsequently went to North Africa and helped train the troops getting ready for the invasion of Sicily. The ship also was used to deliver troops and military equipment to beachheads in Sicily and later Salerno, Italy.

The 328-foot-long ship later participated in the D-Day invasion and made frequent trips between Britain and the beaches of Omaha, Utah, Gold and Juno as the war effort progressed in Europe.

“This ship subsequently made 42 round trips between England and the coast of France delivering supplies, bringing back wounded, bringing German prisoners of war — whatever they needed it to do,” he said.

Tallent said the ship was then put in “mothballs” — retired from active service — for several years. The ship went back in service in 1951, served in the military sea transport service, helping to construct the Arctic DEW (Distant Early Warning) Line, a whole series of radar stations built up around the Arctic circle in the event the Russians launched a nuclear attack across the North Pole, Tallent said.

The ship then was again put in mothballs and brought back out and reconditioned in 1964 and was given to Greece as a grant in aid program, which explains the Greek lettering currently on the ship. It served with the Greek Navy until 1999.

“She was pretty much worn out. The Greeks were ready to put the cut torch to it and cut her up for scrap,” Tallent said.

However, before that could happen, a group of former LST sailors got together and brought it home. Tallent said the group had been looking all over the world for World War II era LSTs still in service to to possibly acquire.

Tallent said a group of them went to Greece and spent several months getting the ship to where it would at least run and be reasonably livable. The group, comprised of men in their 70s, then sailed the vessel back to the U.S.

Although he said it “took literally an act of Congress to give the ship to the USS LST Ship Memorial,” the ship is now owned by the nonprofit.

The group takes the ship out to be toured a few times a year.

“Our primary mission is to educate the American public, not only about what these ships did in World War II, but what the home front did to build all the stuff that was needed to win that war. It’s an amazing story,” he said.

Hardinsburg resident Vicki Myers, who toured the boat on Saturday, said she was “overwhelmed by the size” and that it is “very hard to fathom what the men endured.”

She came to tour the boat to honor her late father, who served in the military.

According to Tallent, the USS LST Ship Memorial is volunteer based. Money raised through making port and offering tours in different cities, like they did in Brandenburg, helps with covering the cost of maintenance of the ship. He noted also it takes 5 gallons of diesel fuel per mile to run the ship.

For more information about the LST-325 and the USS LST Ship Memorial, go to lstmemorial.org.

After Brandenburg stop, LST-325 cruise cut short due to COVID

The USS LST-325’s cruise has been cut short following its stop this past weekend in Brandenburg.