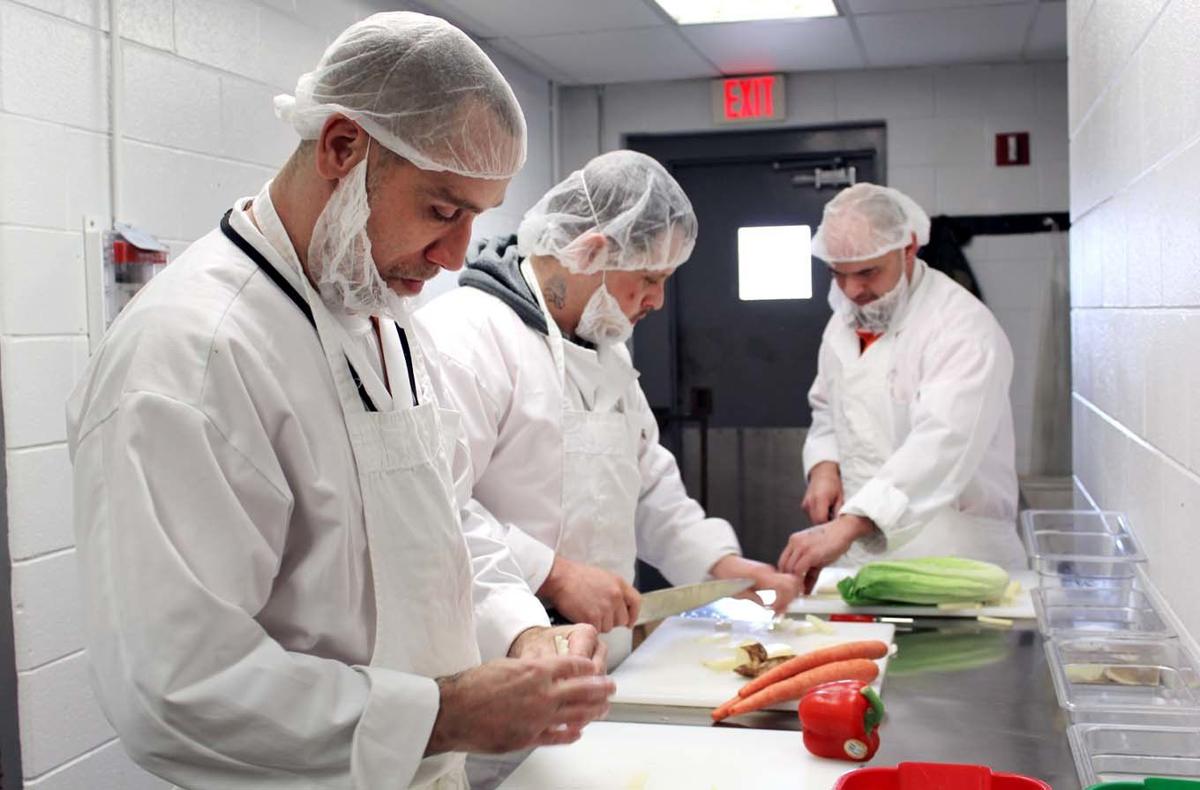 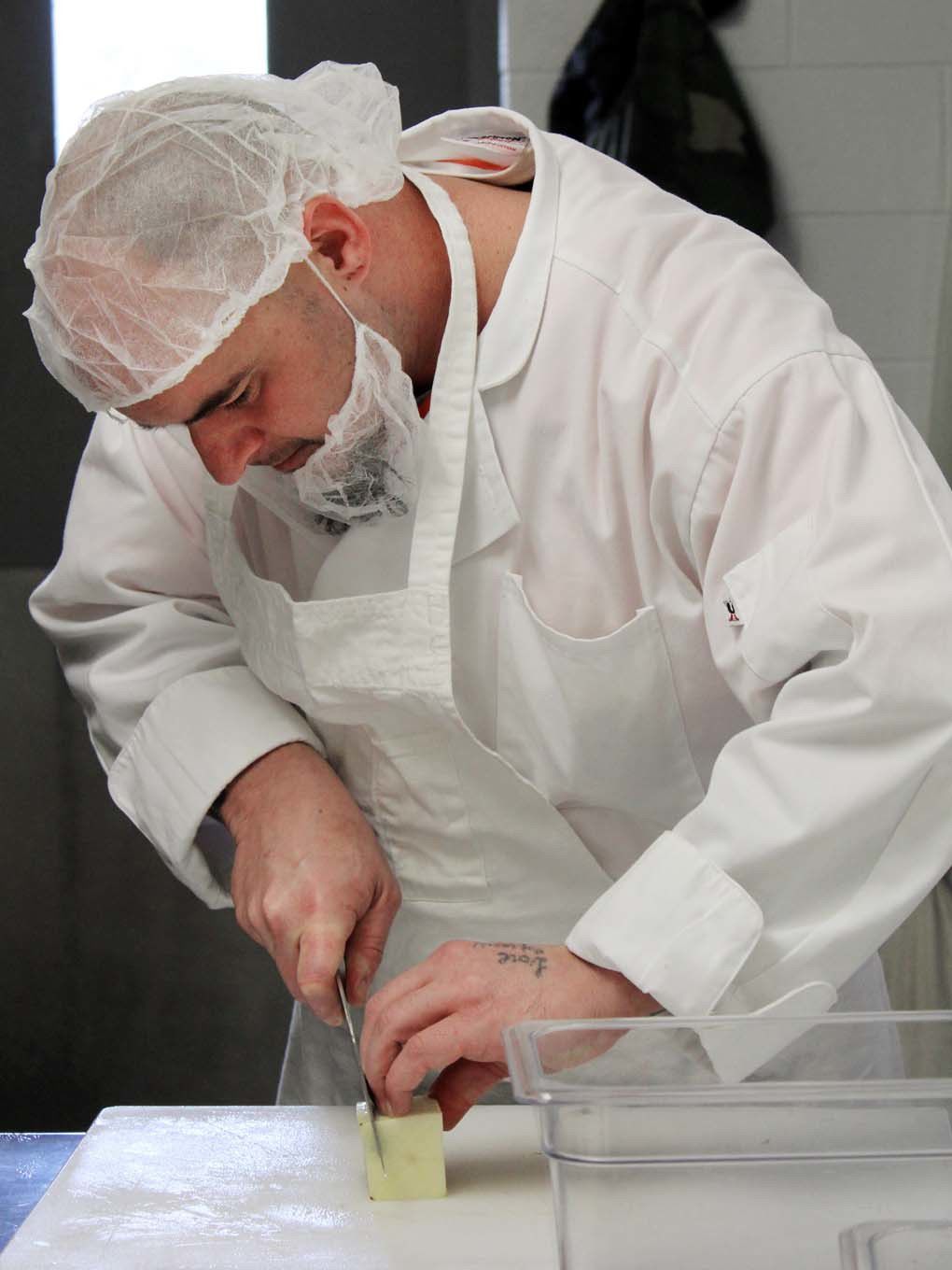 Hardin County Detention Center inmate Darrell Brown practices his knife skills Tuesday on a potato as part of a seven-week culinary arts course offered at the jail. Brown said he aspires to pursue a culinary arts degree and open a restaurant. 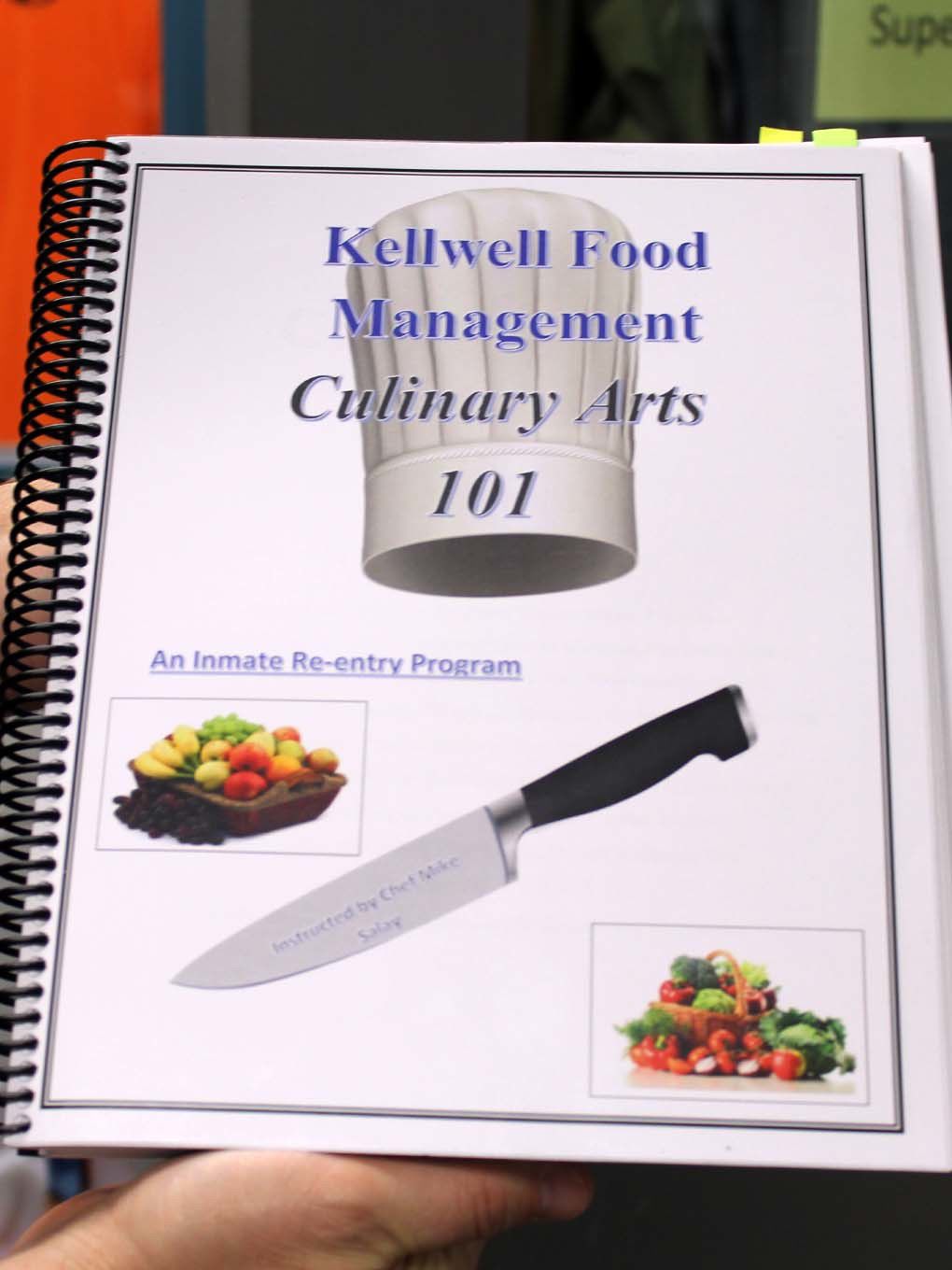 Hardin County Detention Center inmate Darrell Brown practices his knife skills Tuesday on a potato as part of a seven-week culinary arts course offered at the jail. Brown said he aspires to pursue a culinary arts degree and open a restaurant.

Four inmates at the Hardin County Detention Center are learning the recipe to success as they serve their sentences.

The inmates are enrolled in a seven-week course through Kell­well Food Management. Mike Salay, director of business for Kellwell, is teaching the course. Salay has a culinary degree and has been in the industry for 28 years.

“I basically teach them Culinary 101,” Salay said. “I’m teaching the basics of the industry of what I believe they need to know if they are going to work.”

Salay said this is the second class Kell­well has done, the first being in Marion County. He said the goal is to teach food service skills and possibly help inmates start a career.

“Maybe (it will) push them in the right direction instead of (them) returning and falling right back into the same problems,” Salay said.

The four inmates involved in the class all have less than a year of their sentence remaining. Salay said he has been working with Hardin County Detention Center officials on finding companies looking for candidates for work upon departure from the jail.

“We are trying to place them,” he said.

Salay said inmates receive two certifications through the course. At the beginning, they get their ServSafe Certification, which is a three-year certification and is nationally known through the National Restaurant Association.

“They can take that with them wherever they want to go,” he said.

On graduation day, inmates also receive a certification from Kell­well that is similar to a diploma.

Classes are every Tuesday, Wed­nesday and Thursday and last seven to eight hours, Salay said. He said Tuesday was the start of the third week of the course. On Tuesday, the inmates had a knife practical, during which they had to produce six cuts, and a food cost and culinary math test. Following that, he said the group would start making dressings, vinaigrettes and salads.

“I enjoy culinary arts (and) the way things fit together,” Brown said.

Inmate John Johnson agreed, saying he liked the uniformity of it.

Brown said he aspires to open a restaurant some day. The course’s graduation date is Jan. 11 — one day before Brown’s release date. He is thinking of continuing to pursue culinary arts at Elizabethtown Community and Technical College. Salay said Kell­well is interested in partnering with ECTC in the future.

Johnson said he, too, would be interested in doing something in the food service industry.

“If I can get one person to take this and go with it and make a career in the food service, then that is what I am looking to do,” Salay said.

Jailer Danny Allen said Kel­well waived instruction costs this time, but the jail had to purchase textbooks and provide the food. Allen said the total cost was about $1,000.

For future courses, which Allen said they intend to have, it will cost about $3,500.