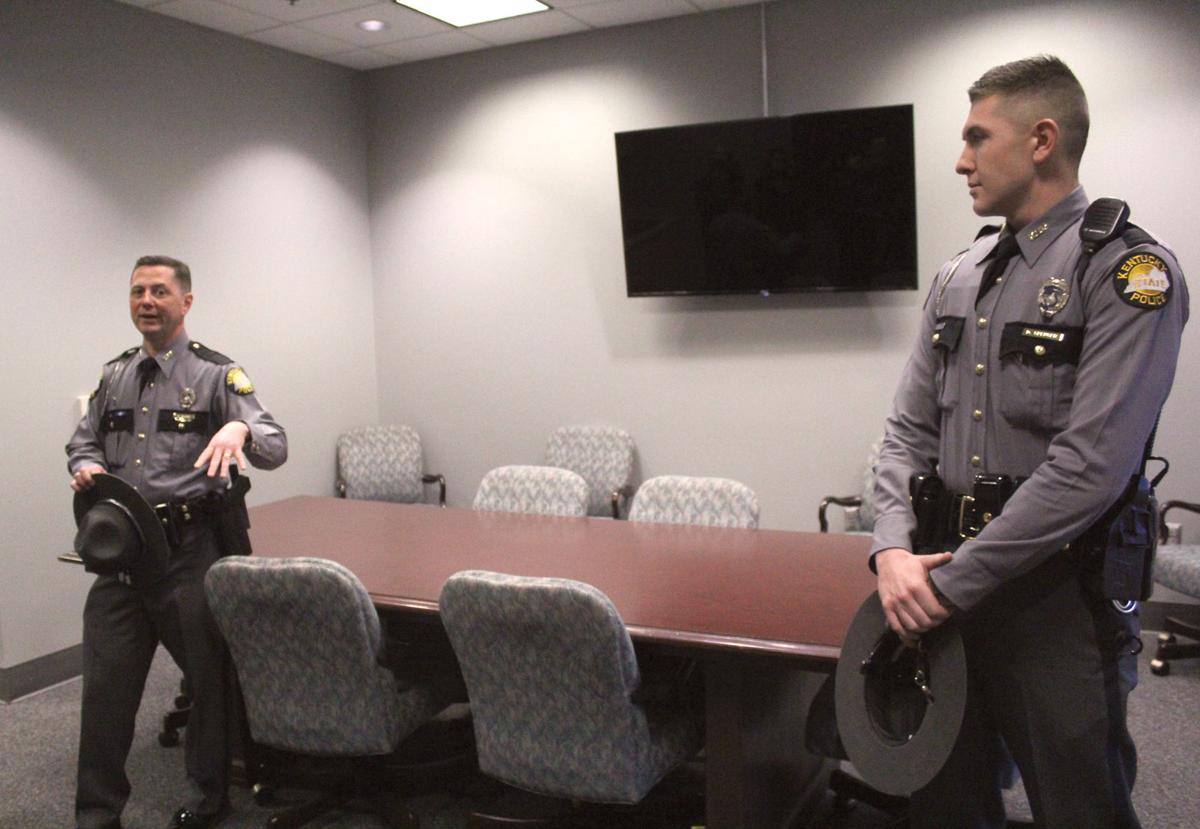 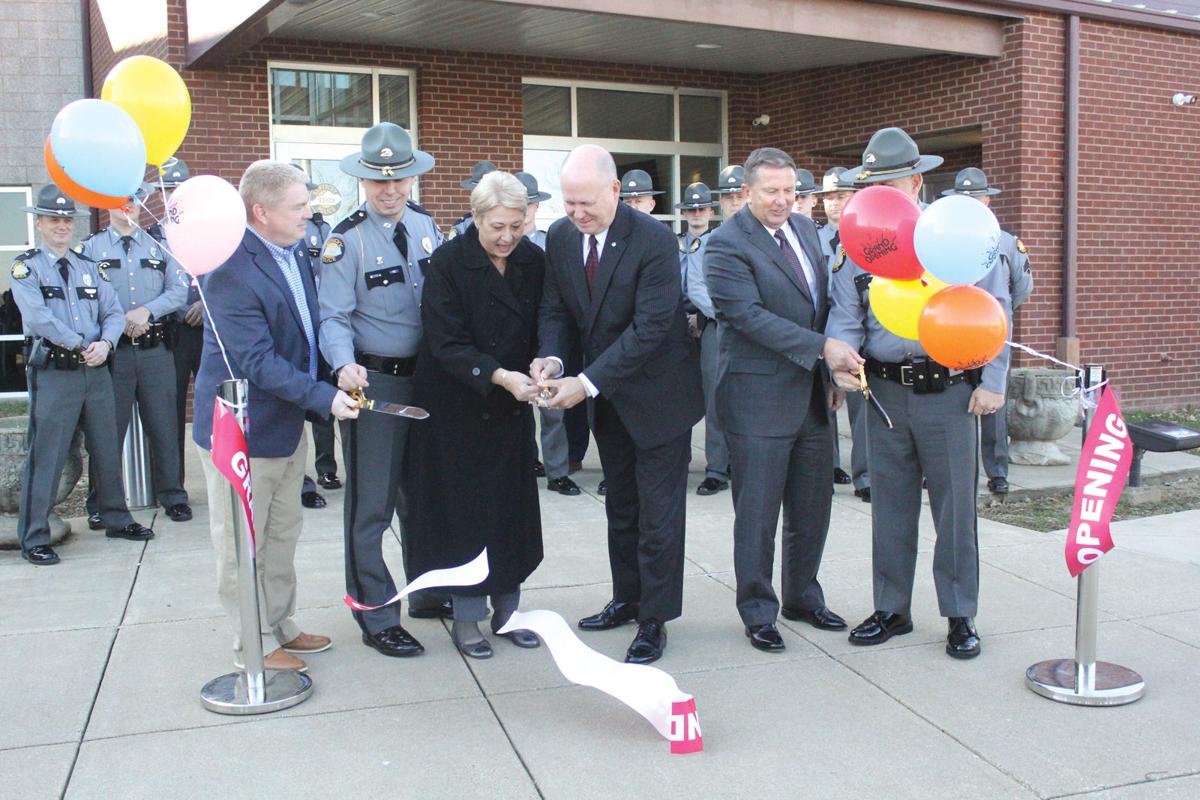 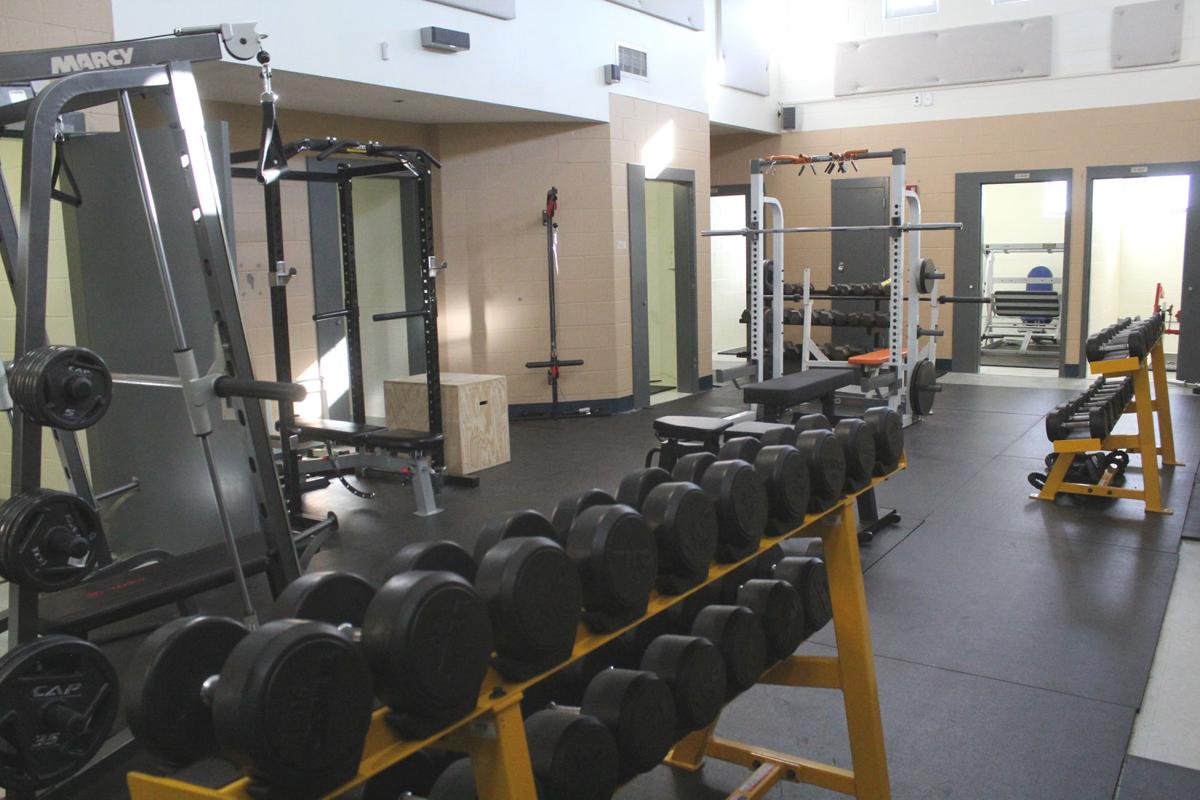 An exercise room is one of the many additions at the new Kentucky State Police Post 4 facility at 820 New Glendale Road in Elizabethtown. 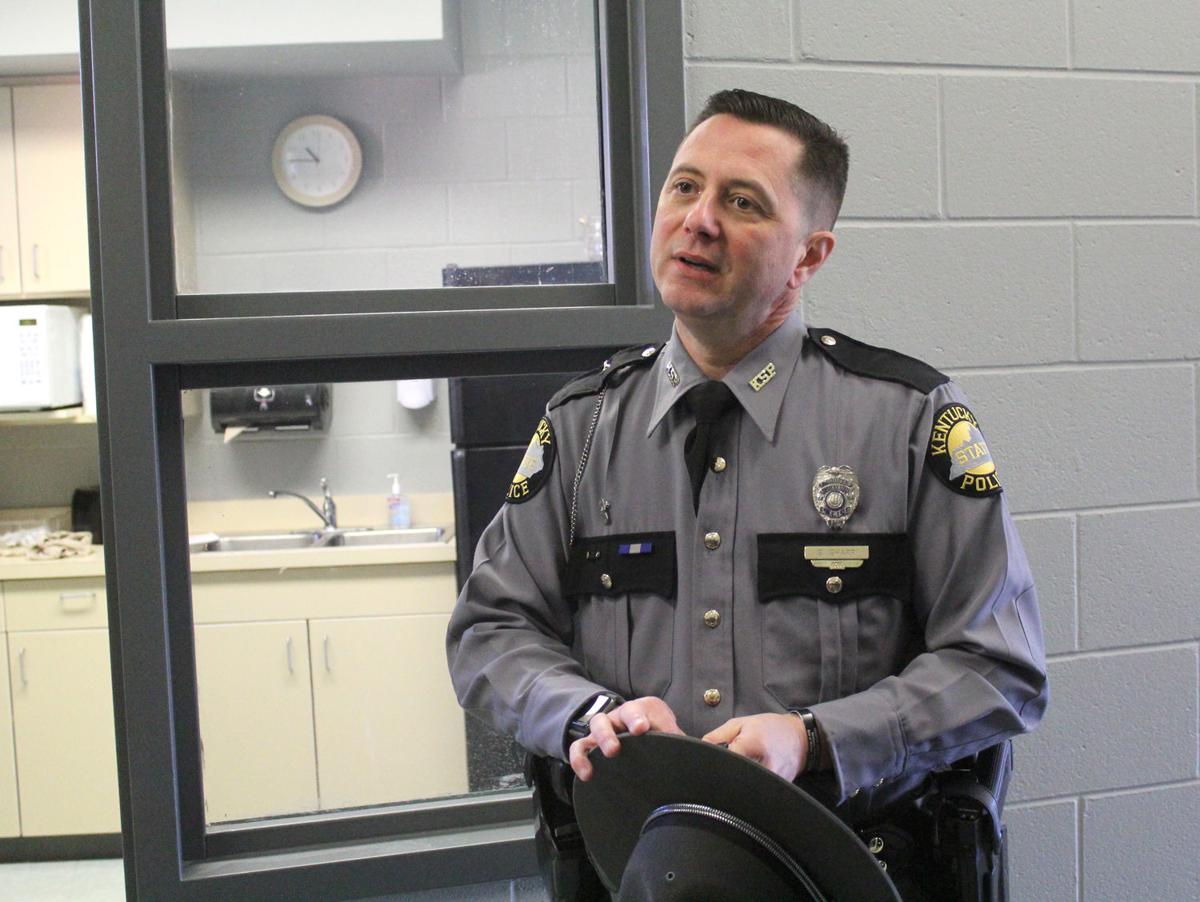 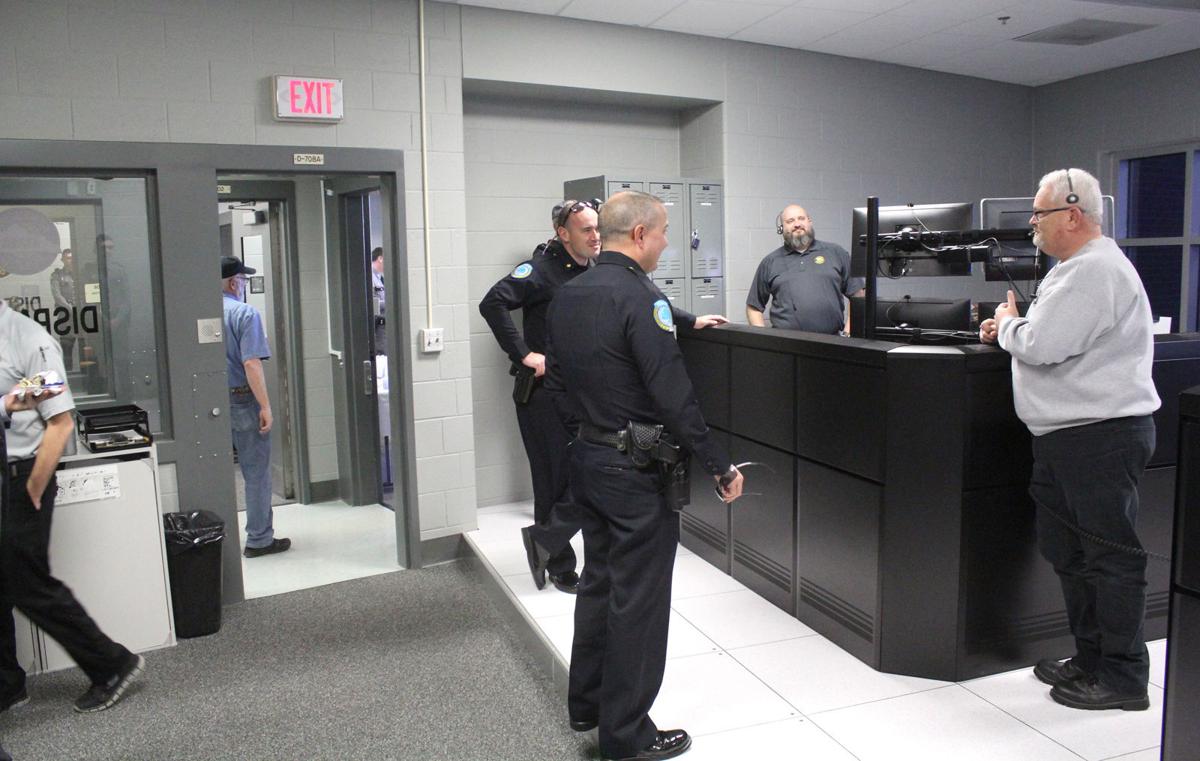 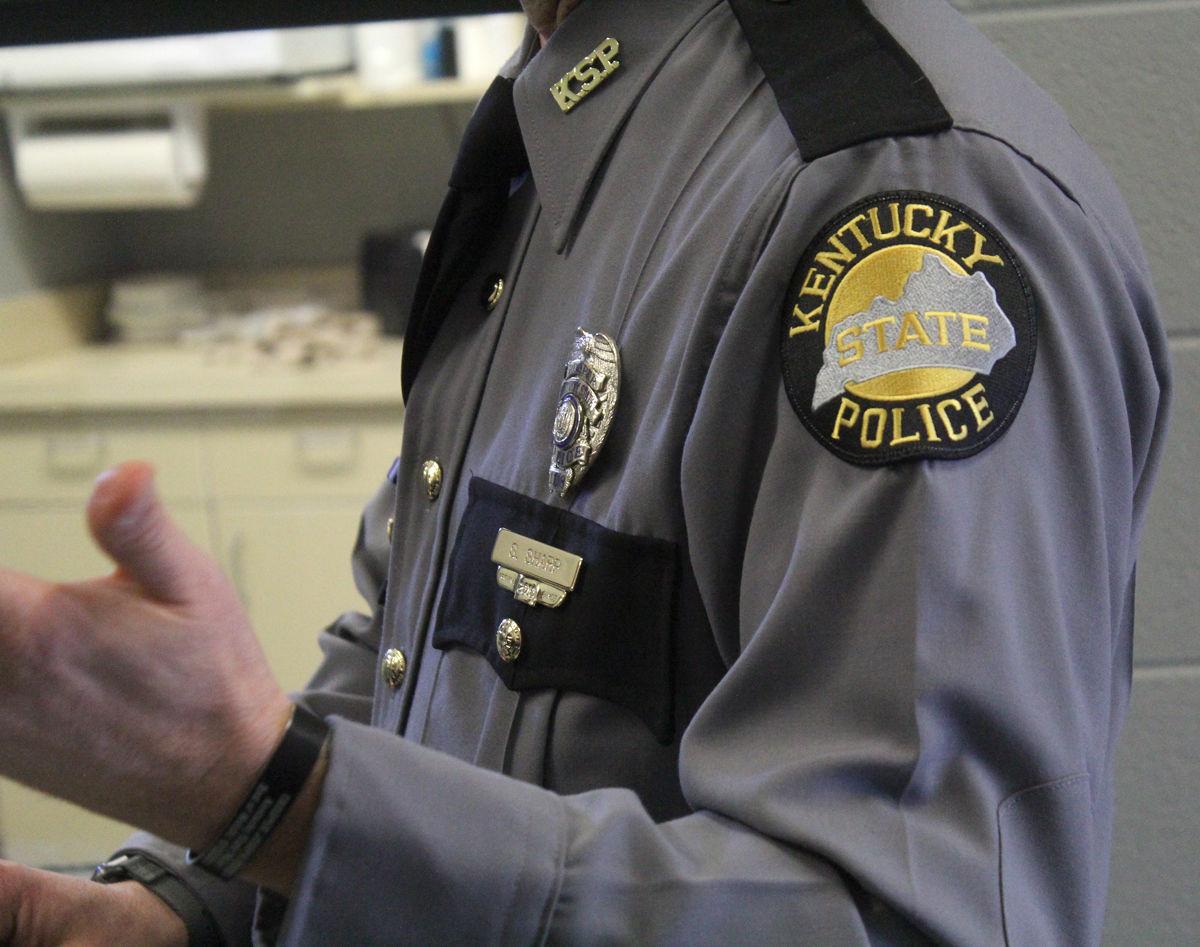 An exercise room is one of the many additions at the new Kentucky State Police Post 4 facility at 820 New Glendale Road in Elizabethtown.

After nearly two years of remodeling the former Lincoln Vil­lage Youth Development and Re­gional Juvenile Detention Cen­ter to match the post’s operating needs, Kentucky State Police Post 4 is operating out of the remodeled facility in Elizabethtown.

KSP Post 4 officially relocated last month from its building near Interstate 65 off North Mulberry Street to its new location at 820 New Glendale Road near the U.S. 31W Bypass on 14.3 acres of land owned by the state.

The ceremony was led by White who provided details about the new post and cost savings it will mean for the agency.

“It’s more than just a post,” White said while addressing guests. “We now have space to host regional in-service training, which will immediately reduce travel costs for employees attending mandatory training. Additionally, the complex provides a large evidence storage impound that will allow multiple posts to utilize that space.”

He went on to detail other benefits of the new facility including ease of access to the interstate, recruitment opportunities and added office space for other state police branches. He said they were able to use a building and land already owned by the state and partnered with other state agencies to renovate the space in a cost-effective manner.

“I don’t see any negatives to this project,” he said.

In a KSP news release, Noble said the Cabinet “is delighted to re-purpose an existing state facility to better accommodate the needs for this state police post.”

The project began in September 2017 and was coordinated by the KSP Properties Management Branch. Other key departments involved included the Department of Highways District 4, Department of Housing Buildings and Construction, the Division of Engineering and Contracting and the Commonwealth Office of Technology.

Trooper Scotty Sharp said troopers and detectives spent lots of time painting walls, moving furniture and doing whatever was needed to help save money and relocate the post as quickly as possible, referring to it as sweat equity.

The new post has 61,754-square feet of operating space and has easy access to U.S. 31W, the U.S. 31W Bypass and parkway and interstate exchanges similar to the previous location.

“Our old post had 8,270-square feet. We have over seven times that here,” Post Commander Capt. Daniel White said. “I’m thankful for what we have and what we have been given.”

In addition to the statewide advantages Chad White mentioned, Daniel White said the facility will house all Post 4 operations and telecommunications services, including a new state-of-the-art telecommunications center and tower that immediately impacts Elizabethtown and surrounding counties.

He went on to discuss the community impact the complex will have.

“The partnerships we have developed during this renovation have exceeded our expectations,” he said. “We have a new school being built right across the street from our post. We believe this will have a huge impact on school safety. We have been meeting and working with the school system to share resources and information that will benefit all of us.”

Daniel White also touted the post’s staff, referencing a quote by Abraham Lincoln, “Whatever you are, be a good one.”

“I work with some of the best,” he said. “I am proud to work with them each and every day. They are the most selfless, self motivated, efficient and effective team that I have ever worked with. These guys ... they would do the great work they do if we had a storage building to work from, that’s the kind of character they have.”