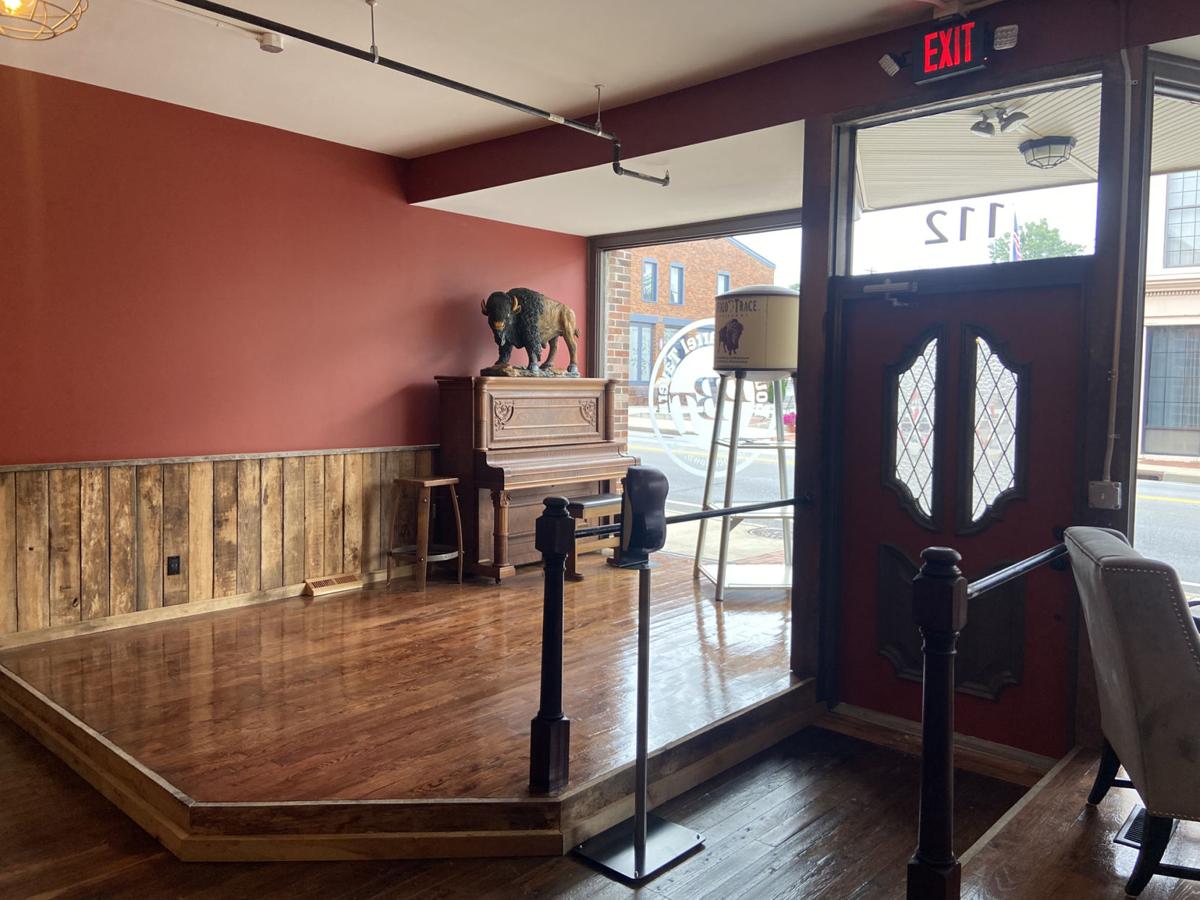 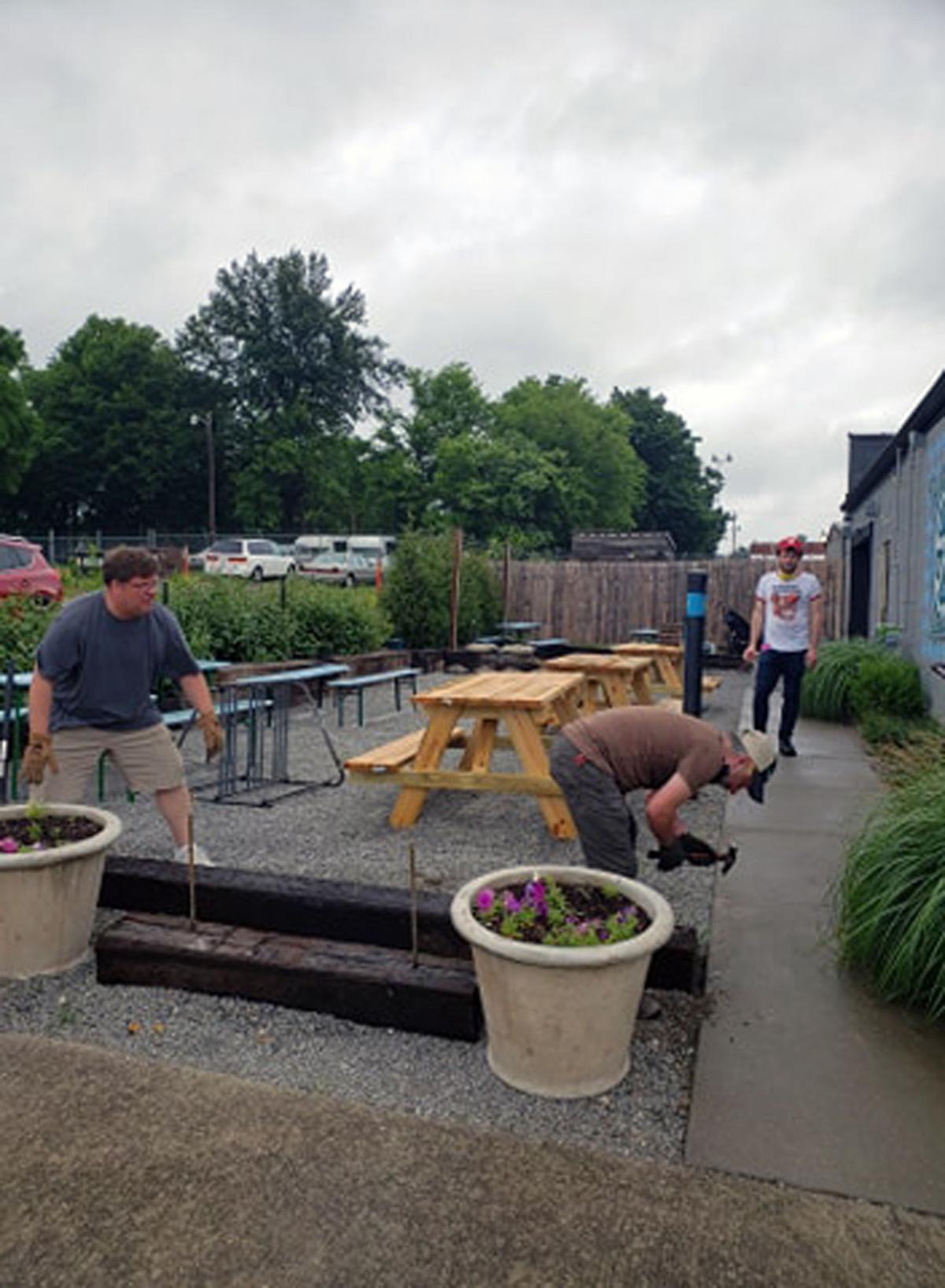 Personnel with Flywheel Brewing work on expanding outdoor seating area ahead of today’s re-opening. The Elizabethtown brewery is encouraging patrons to drink outside, when weather permits, and wear masks while waking around inside the taproom.

Personnel with Flywheel Brewing work on expanding outdoor seating area ahead of today’s re-opening. The Elizabethtown brewery is encouraging patrons to drink outside, when weather permits, and wear masks while waking around inside the taproom.

For the first time in months, Hardin County residents will again be allowed to have a drink at their favorite local bar today. As part of Phase 3 of state re-openings, Gov. Andy Beshear has allowed bars to re-open today with reduced capacity.

Like with any other business, local bars are handling re-opening differently.

At Flywheel Brewing in Elizabethtown, additional patio seating and umbrellas have been installed to encourage patrons to drink outside of the taproom.

“On nice weather days, we would ask as many people as possible to utilize the patio to minimize inside crowding,” co-owner Aaron Hawkins said.

Though patrons can use the taproom, the facility has been set up to ensure social distancing and groups of 10 or less are strongly encouraged, Hawkins said.

Other precautionary measures at the brewery will include a mandate that all employees wear masks, consistent sanitation of tables, encouraging patrons to wear masks when going to order and moving around common areas, the instillation of hand sanitation areas and the removal of the tap room water jug.

“Hopefully it goes smoothly,” Hawkins said. “We just ask people to be patient and work with us. This is obviously not ideal but we are doing what we can to both provide safety for both our staff and customers but also provide a sense of normalcy for the community.”

At Bourbon Barrel Tavern in Eliza­beth­town, several new precautionary measures will be put in place upon re-opening today.

Local musician Kevin Jaggers will perform an abbreviated set during Bourbon Barrel Tavern’s re-opening today. Reynolds said additional spacing between the stage at the crowd will be implemented.

Known for hosting community events such as trivia tournaments and concerts, Flywheel will hold off on hosting events that encourage large crowds, Hawkins said.

“We will explore starting back up some of the smaller events that are more intimate that can be spaced out, but for now we will not be doing stuff that encourages a crowd,” he said.

While in-person patronage was prohibited, Bourbon Barrel Tavern and Flywheel staff both found plenty to do in the interim.

Flywheel still allowed customers to purchase beer to-go and took on a few maintenance projects, Hawkins said. The brewery also crafted a few new beers during this time, including two new IPA-style beers – The Juice Is Loose and The Bitter End – that are available for purchase today.

At Bourbon Barrel Tavern, a building expansion project was completed in the interim. A new section of the bar will now be available to guests, complete with a new stage for performers and an additional bar area. The bar also took on other improvements, such as refinishing floors, reworking the draft beer system and installing a new raised seating area.

“We are excited to reopen, excited to show off the new space and the improvements we have made, but most of all, we are excited to see old friends that we haven’t been able to see for a while and catch up with them,” Reynolds said.

Hawkins encouraged those visiting local bars to be patient and considerate during this time of transition.

“Please wear a mask when traveling around common areas and ordering,” he said. “Last thing we want is our staff to get sick then we have to shut down. We’ve all made tremendous sacrifices these last several months; lets not make it all for naught by thinking we can just go back to normal just yet.”