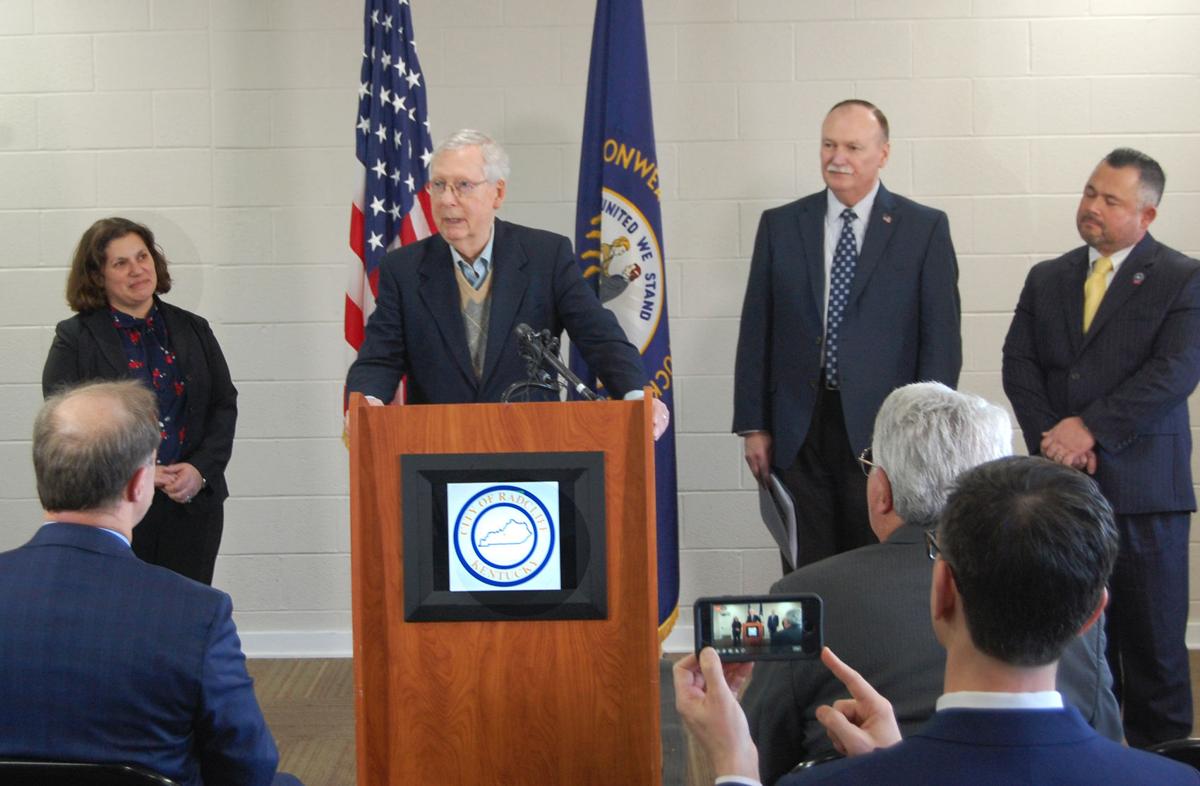 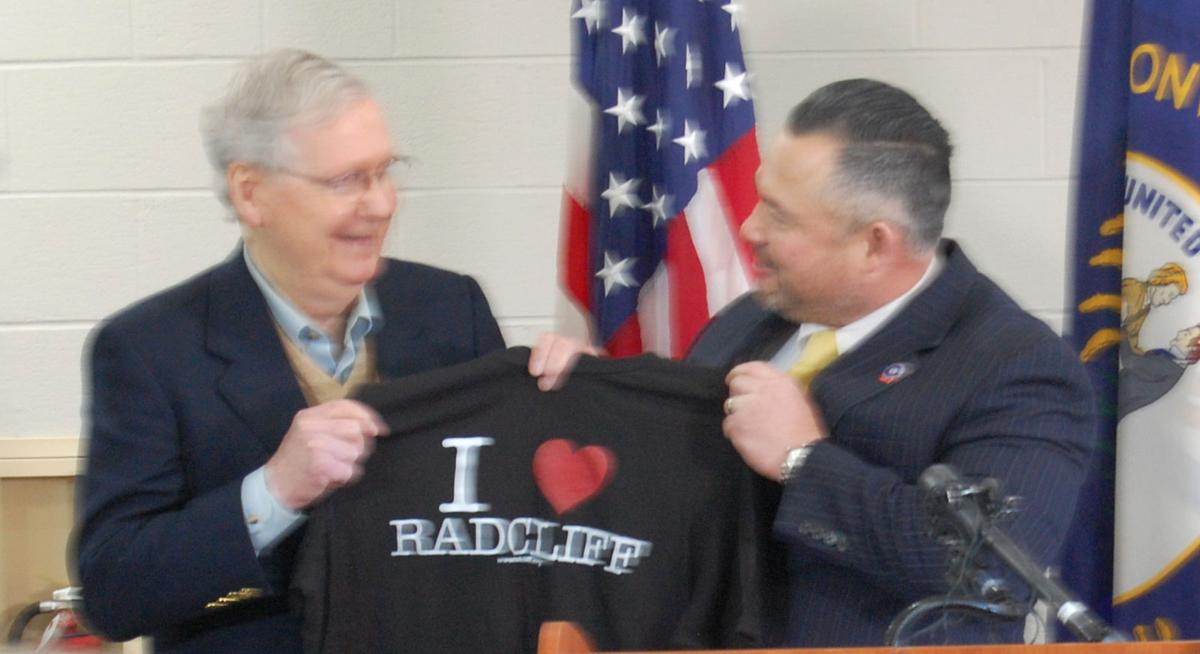 In appreciation of U.S. Sen. Mitch McConnell and in honor of Valentine’s Day, Radcliff Mayor J.J. Duvall presents the majority leader with a T-shirt during Friday’s news conference at Colvin Community Center. 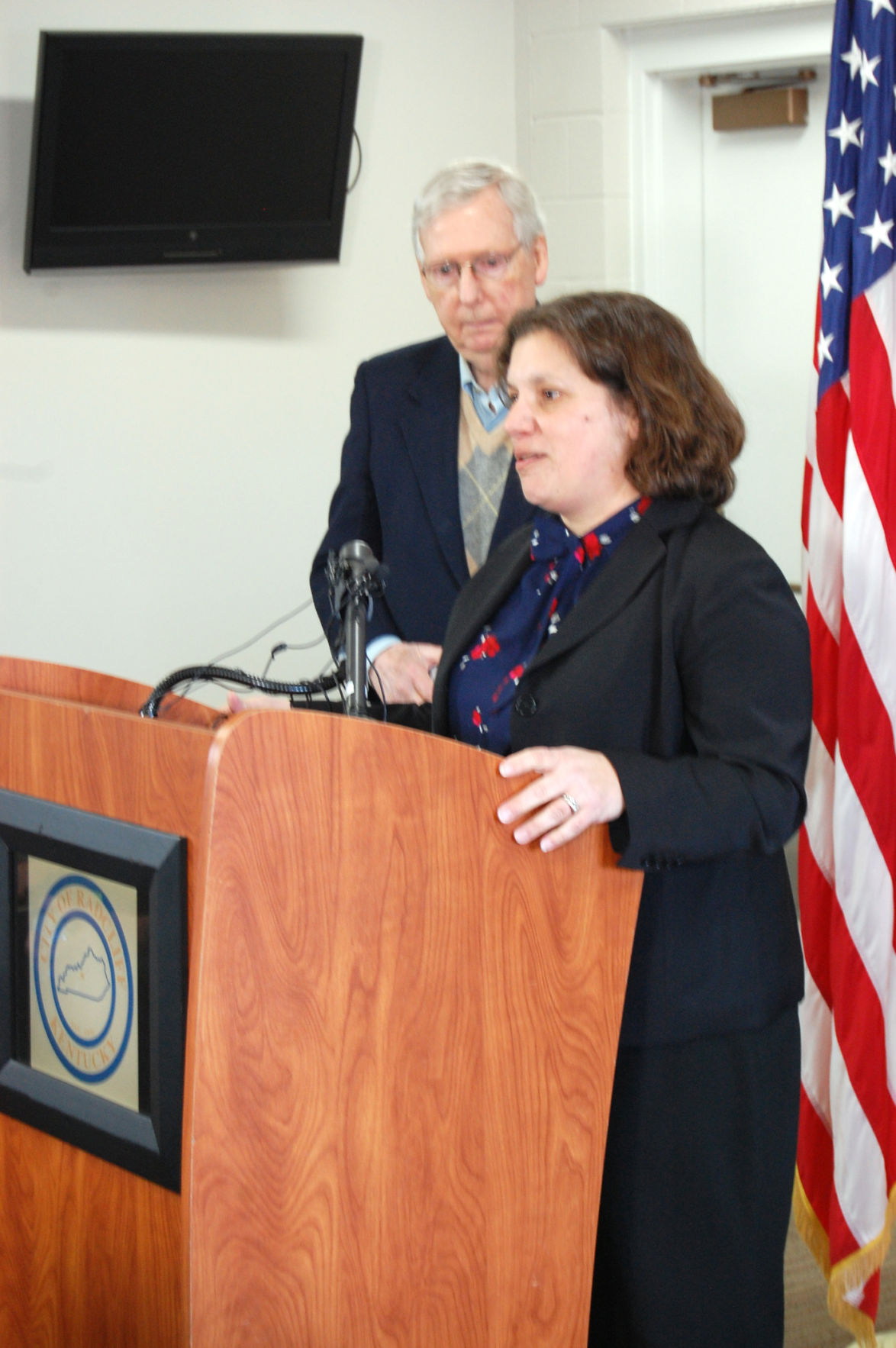 As U.S. Sen. Mitch McConnell listens nearby, Beth Avey speaks about Fort Knox and its role in securing the Fifth Corps headquarters. She is vice president of the Knox Regional Development Alliance. 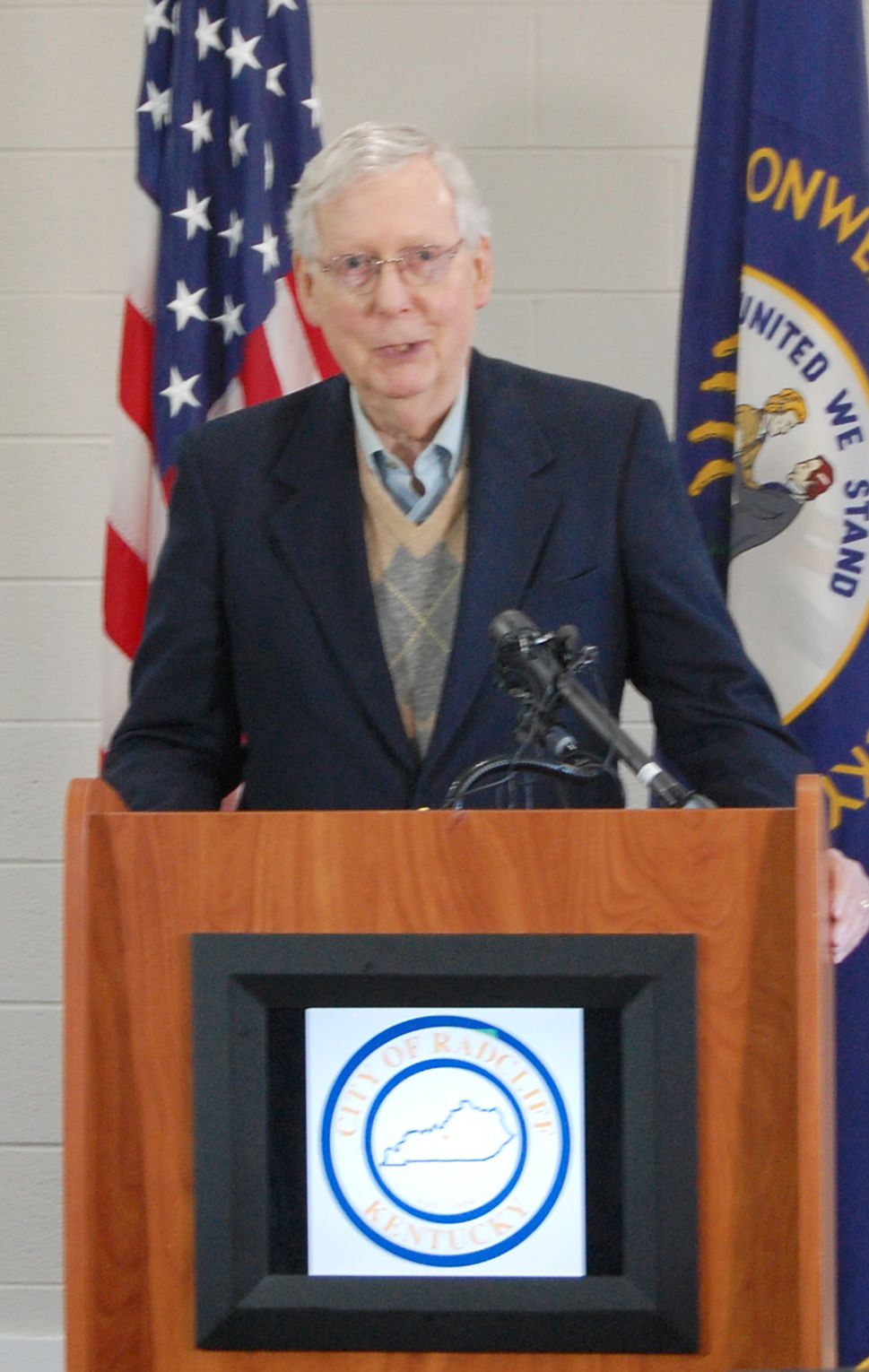 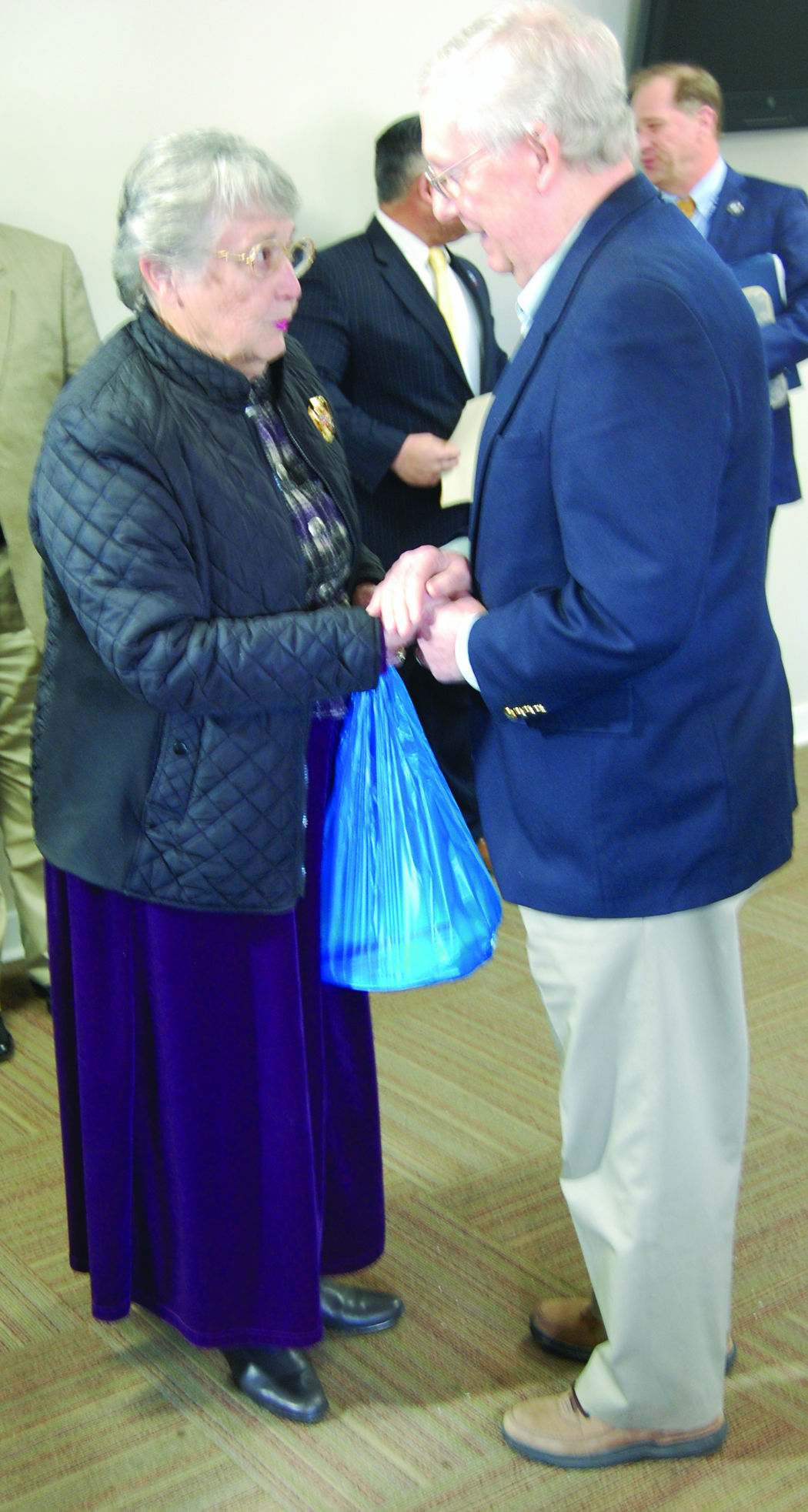 After his news conference Friday at Colvin Community Center, U.S. Sen. Mitch McConnell shares a moment with Barbara Proffitt, a community ambassador, who presented the senator with a pecan pie as a thank you for his work on behalf of Fort Knox and the region.

In appreciation of U.S. Sen. Mitch McConnell and in honor of Valentine’s Day, Radcliff Mayor J.J. Duvall presents the majority leader with a T-shirt during Friday’s news conference at Colvin Community Center.

As U.S. Sen. Mitch McConnell listens nearby, Beth Avey speaks about Fort Knox and its role in securing the Fifth Corps headquarters. She is vice president of the Knox Regional Development Alliance.

After his news conference Friday at Colvin Community Center, U.S. Sen. Mitch McConnell shares a moment with Barbara Proffitt, a community ambassador, who presented the senator with a pecan pie as a thank you for his work on behalf of Fort Knox and the region.

Mitch McConnell came to Rad­cliff to share in the celebration of Fort Knox’s good fortune in being selected as home to a new U.S. Army corps headquarters.

“There was a lot of competition, as you can image, for this Fifth Corps headquarters and we are exceedingly happy that we won,” the Senate majority leader said Friday at a news conference in Radcliff.

A ninth general officer mission at the post, the Fifth Corps is expected to have an estimated economic impact on the region of nearly $100 million. It brings an additional 635 soldiers and will be commanded by a three-star general.

Radcliff Mayor J.J. Duvall said the Army’s announcement “solidified what we know and the rest of the world knows now, we are a world-class installation.”

McConnell, who is Ken­tu­cky’s senior senator and stands for re-election this year, said he joined with Sen. Rand Paul and Rep. Brett Guthrie to encourage Fort Knox’s selection but its resources were central to its selection.

“It’s no accident that Fort Knox has the facilities and the infrastructure needed for the Fifth Corps,” McConnell said. “For decades, I’ve tried to direct hundreds of millions of dollars in federal funding to this area to make sure we were capable when trying to get new missions.”

One example is the Lt. Gen. Timothy J. Maude Com­plex built on post in response to the 2005 Base Realignment and Closure initiative, which brought the Human Resources Com­mand and a focus on recruitment to Fort Knox. Considered the largest office building in Ken­tucky, the 883,180-square-foot facility will serve as headquarters for the Fifth Corps, which also is known in Army circles as V Corps.

McConnell stressed the Trump Administration consistently has increased investment in defense and “to rebuilding America’s military strength and modernizing our fighting force and the Fifth Corps is an important part of that mission.”

While McConnell emphasized the importance of a military-friendly community plus talent and resources on post, Hardin County Judge-Ex­ec­u­tive Harry Berry used his remarks to focus on the senator’s role.

“His influence, his savvy, his clout, his political capital, his leadership is what brought this win to the Commonwealth of Kentucky and our community,” Berry said before turning to address his fellow Re­pub­li­can directly. “And, sir, we thank you for your decades of unwavering support for Fort Knox, for its soldiers, its families and for all of us who served in uniform.”

McConnell specifically praised the work of the Knox Regional De­vel­op­ment Alliance, a privately paid for organization started in 2015 to promote the post, increase military investment there and attract new missions.

Beth Avey, vice president of the alliance, said she and Jim Iacocca, a retired brigadier general who serves as its president and CEO, have received numerous calls and messages of congratulation since Tuesday’s Fifth Corps announcement.

“But really it is the community and their work to support soldiers and families that is a testament to us being able to tell the story of Fort Knox and that great installation and this great community,” Avey said at the news conference.

World-class training facilities and Fort Knox’s status as the armed forces leader in energy independence also were mentioned as key qualities leading to the post being selected for the new corps HQ over 31 installations considered.

But Avey said the dedicated soldiers and civilian employees working on post create a superior atmosphere.

“A special thanks to the work­force at Fort Knox for all that they do day in and day out to make it the premier installation it is,” she said.

Before the news conference at Colvin Community Center, the development alliance held a lunch for McConnell, other community leaders and its directors, most of whom stayed for the media session.

Ray Springsteen, president of Fort Knox Federal Credit Union and an early advocate of the alliance, said in an interview the corps announcement was “just what we envisioned” when the community fundraising effort began in 2015.

With 22,000 jobs, a payroll of $750 million and annual regional economic impact of $2.6 billion, the speakers emphasized the importance Fort Knox has for the region.

“Fort Knox is our industry. It’s our UPS, it’s our Toyota, it’s our Ford,” Duvall said. “And it’s located right here in our back yard.”

Although Army estimates on the V Corps’ economic impact are not yet available, KRDA projects the post will see an increase of roughly $58 million in compensation plus $8.5 million increase in contract spending. Using an existing economic impact model, the alliance estimates consumer expenditures will increase $97.6 million annually thanks to the corps.

McConnell expects the corps’ arrival, which is anticipated this fall, will be met with more fanfare.

“When the Fifth Corps officially activates here later this year, I’m very confident they are going to get a big warm welcome from this great community,” he said.

Fort Knox is being el­e­vated in U.S. Army cir­cles and the benefits are expected to spill over into the regional economy.