Sign Up
Log In
Purchase a Subscription
You are the owner of this article.
Edit Article Add New Article
You have permission to edit this article.
Edit
Home
News
Sports
Opinion
Life
Celebrations
Obituaries
Marketplace
Calendar
Public Notices
Contests
Local Directory
1 of 3 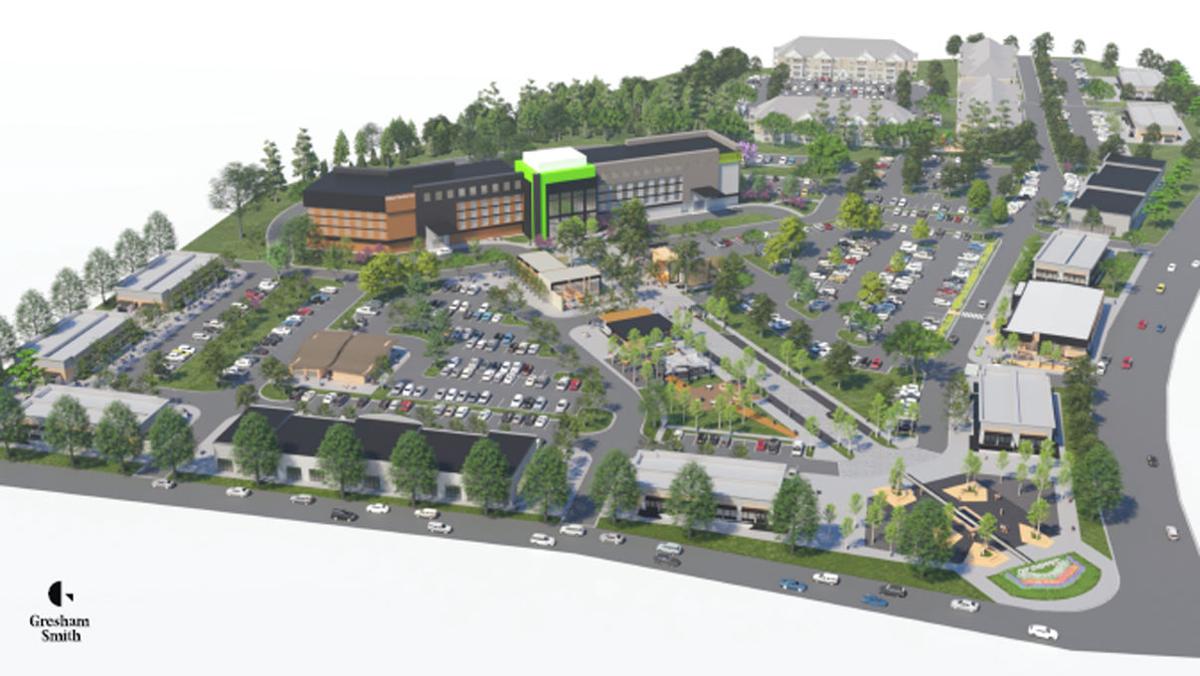 The Cameron Group’s plans to redevelop property at the corner of North Wilson Road and Knox Boulevard calls for the buildings to face a central courtyard anchored by a hotel with 200 or more rooms. The multi-use development expects to attract multiple restaurants plus retail and office complex. The drawing also shows permenant residences on the grounds. 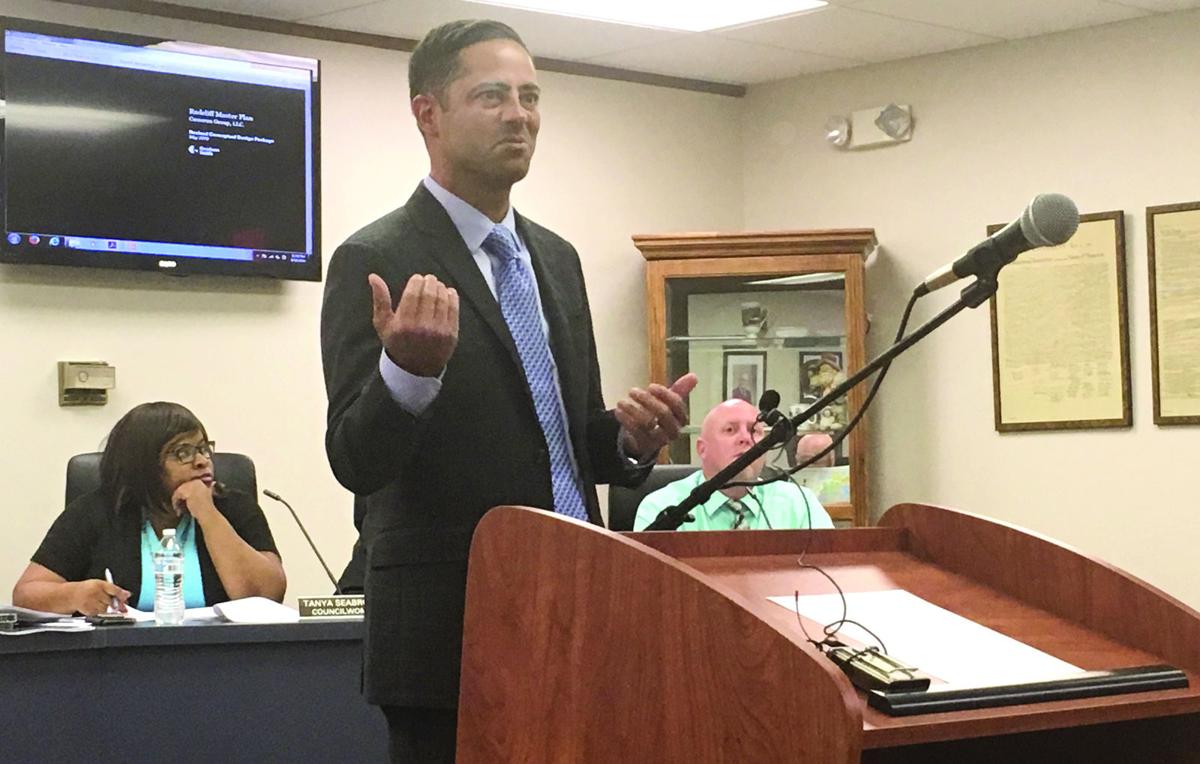 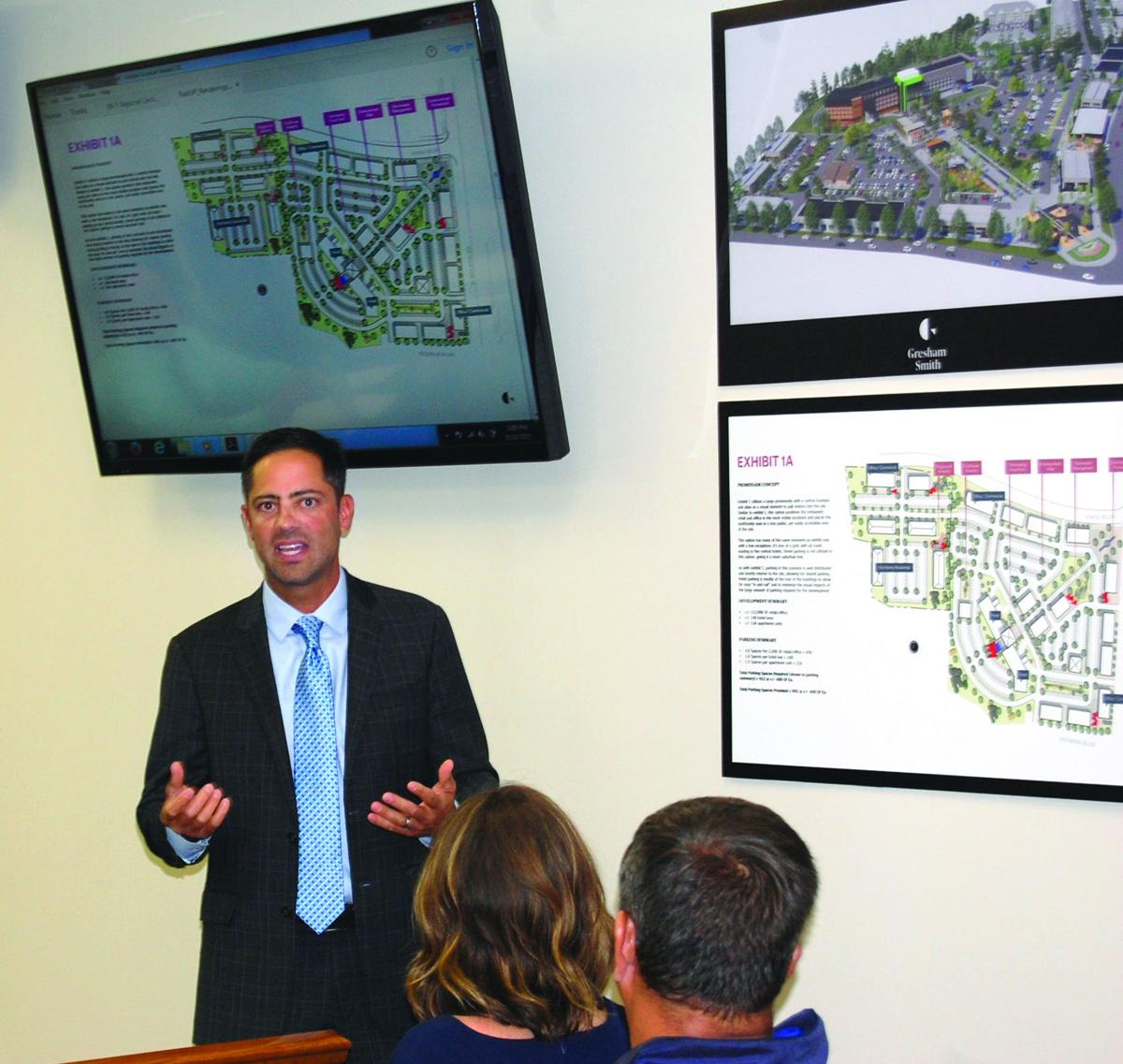 Prior to a public hearing Tuesday on a related tax-incentive program, Matt Valenti of the Cameron Group explains concepts of the $94.8 million hotel, housing and retail project planned for the former Redmar Plaza site in Radcliff.

The Cameron Group’s plans to redevelop property at the corner of North Wilson Road and Knox Boulevard calls for the buildings to face a central courtyard anchored by a hotel with 200 or more rooms. The multi-use development expects to attract multiple restaurants plus retail and office complex. The drawing also shows permenant residences on the grounds.

Prior to a public hearing Tuesday on a related tax-incentive program, Matt Valenti of the Cameron Group explains concepts of the $94.8 million hotel, housing and retail project planned for the former Redmar Plaza site in Radcliff.

With artistic depictions adorning the walls and projected on television screens in the Radcliff council chambers, Matt Valenti described a new future for the city’s north end.

He explained the master plan for the entire $94.8 million development during an informational update preceding a public hearing about a tax-incentive program planned by the city.

“We intend to build a Class A project with two hotels, residential units, commercial office space ... right outside of the installation at Fort Knox,” he said.

It features a promenade and a central fountain as a visual centerpiece leading to hotels designed to address needs on post. The complex is expected to have as many as 240 available rooms plus conference facilities.

Most of the 900-plus parking spaces are in the center of the grounds with restaurants, retail and office spots around the outside of the property facing a central courtyard. That allows the parking to be conveniently shared and creates a walkable, community feel. The multi-use development also calls for 144 apartment units tucked away in the rear.

Mayor J.J. Duvall began work­ing with Valenti while serving as economic development di­rect­or under Mike Weaver, the pre­vious mayor. Duvall said the Red­mar area’s rebirth has been a key concern for years with many leaders, including him­self, struggling to find a solution.

“This is one of the first time we’ve been able to actually get, I believe, a great project,” Duvall said. “Get everybody on board and all the landowners on board.”

Reminiscing about a time when Red­mar Plaza featured active anchor stores and was a retail hub, Duvall said Radcliff must provide an attractive gateway to capture more of Fort Knox’s support.

“Over the last 20 years, we’ve seen quite a bit of blight and neglect in an area that we should be seeing a lot more development out of,” Duvall said before introducing Valenti at Tuesday’s city council meeting. “Almost $2.6 billion of economic impact comes out of the installation.”

The meeting included a formal public hearing to collect comments on the planned Tax Incremental Financing or TIF district. If enacted, the TIF would determine the current baseline tax revenue generated by the property and new tax dollars created through property, payroll and possibly sales tax would be reinvested at the site.

John R. Farris of Common­wealth Economics, an expert in TIF districts who is working with the city, said there’s no risk to taxpayers and it will not increase tax rates. Up to 80 percent of money generated by the developer’s success could go back into the project, but if the developer is not successful there would be no money to share.

In this case, Cameron Group assumes the risk with hopes of being reimbursed for demolition and necessary infrastructure im­prove­ments including utility up­grades, road work, streetscape and drainage issues. The 20-year agreement could yield as much as $14.1 million if the development reaches its full potential.

Once the city formalizes its support of the TIF process, Farris said he will apply for approval of state participation through the Cabinet for Economic Development.

Only two people spoke during the TIF public hearing Tuesday. Gary Summers discussed financial stresses being experienced by the city and Jeff Farmer, a local Realtor, spoke in behalf of the Cameron Group’s concept.

Residents have a second opportunity to express themselves about the TIF district next week. A second public hearing is planned for 10 a.m. Monday in the council chambers on the second floor of Radcliff City Hall, 411 W. Lincoln Trail Blvd.