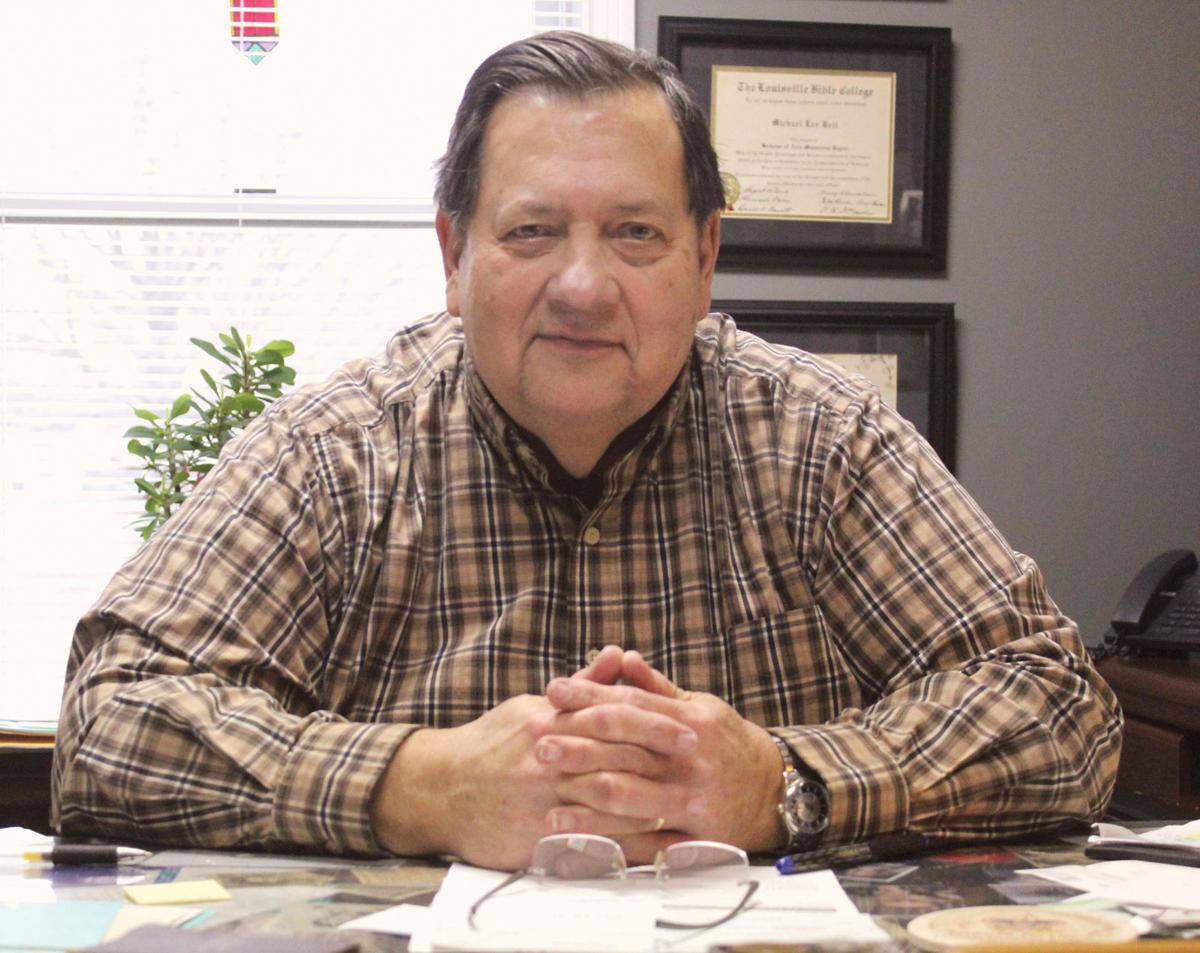 Mike Bell poses behind his desk at Glendale Christian Church. In gratitude of their 50 years of service, the church recently established the Mike and Sharon Bell Scholarship.

In gratitude of their 50 years of service, Glendale Christian Church established the Mike and Sharon Bell Scholarship.

Mike Bell poses behind his desk at Glendale Christian Church. In gratitude of their 50 years of service, the church recently established the Mike and Sharon Bell Scholarship.

In gratitude of their 50 years of service, Glendale Christian Church established the Mike and Sharon Bell Scholarship.

Tired of the ministry after a bad experience at a previous church where he had been for four years, Bell determined at the time he was going to work for Cummins Engine and be done with it.

However, he said, God had a different plan. After being encouraged by a friend to try out Glendale Christian Church, Mike put in an application, was invited for an interview, had a trial sermon and was offered the position.

The couple, who met at Louis­ville Bible College in September 1965 and married the following June, moved to Glendale in 1970.

Mike and Sharon served together until her death in 2015.

They were instrumental in establishing the Glendale Crossing Festival, were active in school activities and committees, including Mike serving as the announcer for numerous sports and activities, and a part of Glendale Lions Club, Hardin County Chamber of Commerce, White Mills Christian Camp, Hab­itat for Humanity, Helping Hand of Hope, Hardin County Industrial Foundation, Ministerial Association and Hardin County Water District No. 2, where he has been on the board for 33 years.

Mike also has received numerous awards over the years, such as the Farm-City Dis­ting­u­ished Citizen Award 2014, Central Har­din High School Athletics Hall of Fame 2017 and the 5th Region Athletics Director Hall of Fame 2002.

In gratitude for the Bells’ service, the church has established the Mike and Sharon Bell Scholar­ship to ensure their legacy and kindness endures.

Tim Isaacs, chairman of the Glendale Christian Church board, said it’s im­possible to quantify the current and future influence of Mike and Sharon in the community.

Isaacs has known the Bells for most of his life, starting in 1981 when he came to the Glen Dale Children’s Home at 14. He was in class with Mike and Sharon’s eldest son, Jon. He said Mike called their basketball games at East Hardin and always was involved.

“Over the years he has gone, for me, from a respected person in the community, to my pastor and mentor, to a father figure,” Isaacs said. “I lean on him heavily for advice and he is a wonderful source of encouragement and support.

“The way I have always described Mike and Sharon for me is: Mike sees the best in me and the potential. Sharon saw me for who I was and loved me anyway.”

Isaacs said there is very little in Hardin County they haven’t touch­ed over the years.

“Their community outreach was always their biggest priority and the list of things they were involved with speaks to that,” he said.

Isaacs shared a story he heard from one of Mike’s daughters-in-law. After Sharon’s death, Isaacs said she told him she never really understood why Mike took all the hours to announce football, both basketball teams and softball. Then she saw all the students and alumni that came to visitation for Sharon and she understood.

“The number of young people that this couple has impacted over the last 50 years in Har­din County would be hard to measure,” he said.

The letter went on to say, “It would be im­possible to list all the com­munity projects they poured effort and love into over the years. ... It’s our turn to show our gratitude for their kindness, their generosity and love for us.”

Hardin County Judge-Executive Harry Berry said the Bells’ contributions to the entire community and especially to the Glendale area, is immeasurable.

“For almost 50 years they have provided strong leadership, mentorship and compassion throughout our community,” he said.

“Hardin County’s ex­cell­ent reputation throughout the Com­mon­wealth is due in large part to the many con­tri­bu­tions they have made to our county,” Berry said. “While we deeply miss Sharon these last few years, we are still blessed and benefit greatly from the wisdom, thoughtfulness, and commitment to our community displayed by Mike each and every day. Mike and Sharon have always been the best of friends anyone could ever hope for.”

When asked if he thought he made an impact on the people and community within it, Mike said they’ve made a bigger impact on him than he’s made on them.

He said his father used to tell him, when you throw a rock in a pond, the ripples the rock makes are the effects of your life.

Mike said Sharon is a very intricate part of the whole ministry. When the scholarship, in both of their names, was announced during a church service, he said it thrilled his heart. He doesn’t want her to be forgotten. Though Mike was the face many people saw, he said Sharon always was by his side.

The church letter in­vites people to join in growing the scholarship for students of the community.

The fund, managed by Central Kentucky Com­munity Foundation, is an endowment fund and will award a scholarship annually to a student served by Har­din County Water Dis­trict No. 2 or actively in­volved in Glendale Christian Church.

“Of all the honors that I have gotten ... the greatest honor was establishing a scholarship because like dad said you want to make ripples and this will make ripples for generations to come,” Mike said.

For information, contact Glendale Christian Church at 270-369-7874 or Davette Swiney with Central Kentucky Community Foundation at 270-737-8393 or dswiney@ckcf4people.org.