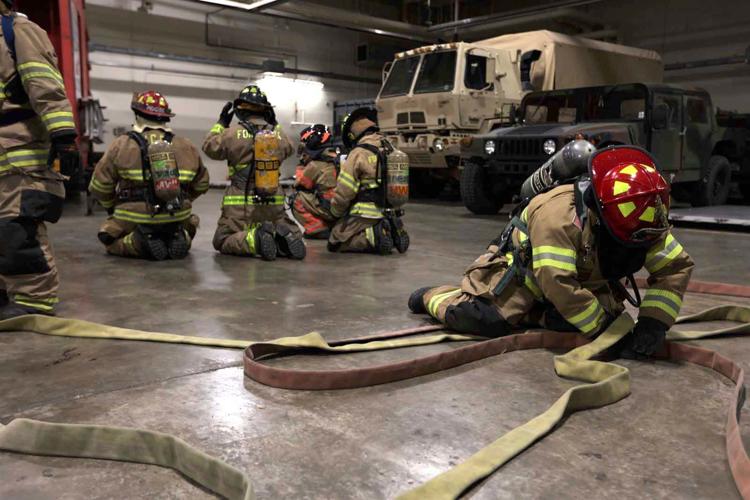 A blindfolded firefighter attempts to find hose couplings Saturday in order to learn how to navigate back to the truck during a survival skill course at Fort Knox. 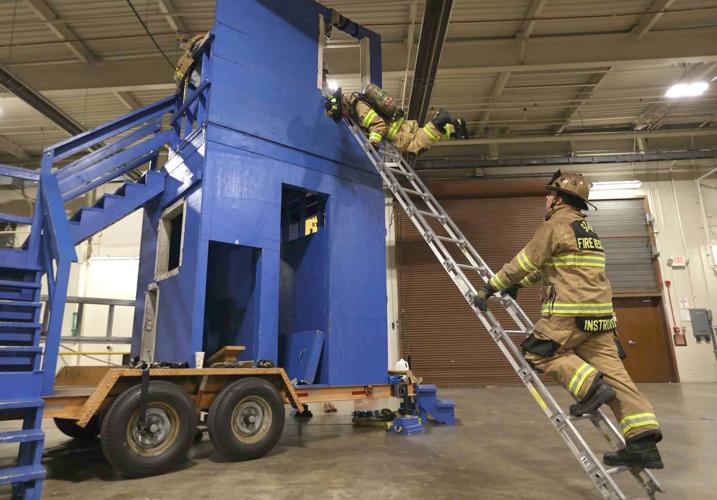 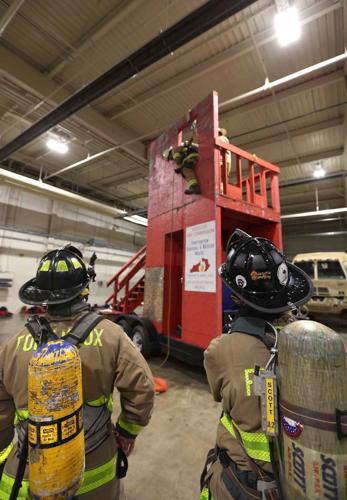 Numerous area fire departments participated in a survival course last weekend at Fort Knox, which included entering through a wall and escaping out a window.

A blindfolded firefighter attempts to find hose couplings Saturday in order to learn how to navigate back to the truck during a survival skill course at Fort Knox.

Numerous area fire departments participated in a survival course last weekend at Fort Knox, which included entering through a wall and escaping out a window.

About 50 area firefighters, junior firefighters, trainees and instructors participated in a training event at Fort Knox to develop survival skills.

Fort Knox Assistant Fire Chief Todd Vinton said this course — which is a requirement to become a volunteer certified firefighter — was created with one main focus.

“All of this class is strictly about techniques to help firefighters survive,” Vinton said. “The exercises were all developed from different instances that have happened where firefighters have lost their lives.”

The course was conducted last Saturday and Sunday and included both classroom time and hands-on-training evolutions.

Day one focused on self-rescue, especially when separated from teammates and in situations with little to no visibility. Vinton said the exercises each had an added level of difficulty in some form.

“At the first evolution, they’re blindfolded,” he said. “They have to feel their way down the hose and when they get to a set of couplings, they need to figure out which way goes back out to the truck just by feeling the knots on the couplings.”

Trainees rotate between stations, going through each exercise at least twice to become familiar with techniques.

“At the red [station] they’re working on wall breaching,” Vinton said. “They’ll go inside of a wall and then have to come out a window.”

The third station trainees went through during the first half of day one focused on overcoming entanglements.

“It simulates getting entangled in wires,” Vinton said. “Sometimes when we go through a house, there’s extension cords. If they go through a wall, they’ll get things wrapped around them.”

The second day of exercises focused on rescuing others rather than getting themselves out of danger. Vinton said one of the most difficult aspects was devoted to helping a fallen teammate.

“They simulate down firefighters,” he said. “They’ll drag them to the steps and two trainees will grab them and pack him or her all the way up the stairs.”

Vinton said several different departments participated in the training event to include Fort Knox, Flaherty, Glendale, Valley Creek, Lebanon Junction and Radcliff. The instructors, which were from three separate regions and had more than 300 combined hours of experience, were there to ensure the students got the most out of the course.

Vinton, a state instructor who has been a firefighter for 30 years, 25 of which at Fort Knox, said he was encouraged by what he witnessed over the weekend.

“I feel good seeing these younger people learning these techniques and being dedicated,” he said. “You’ve got to have it in your heart to be able to do it.”