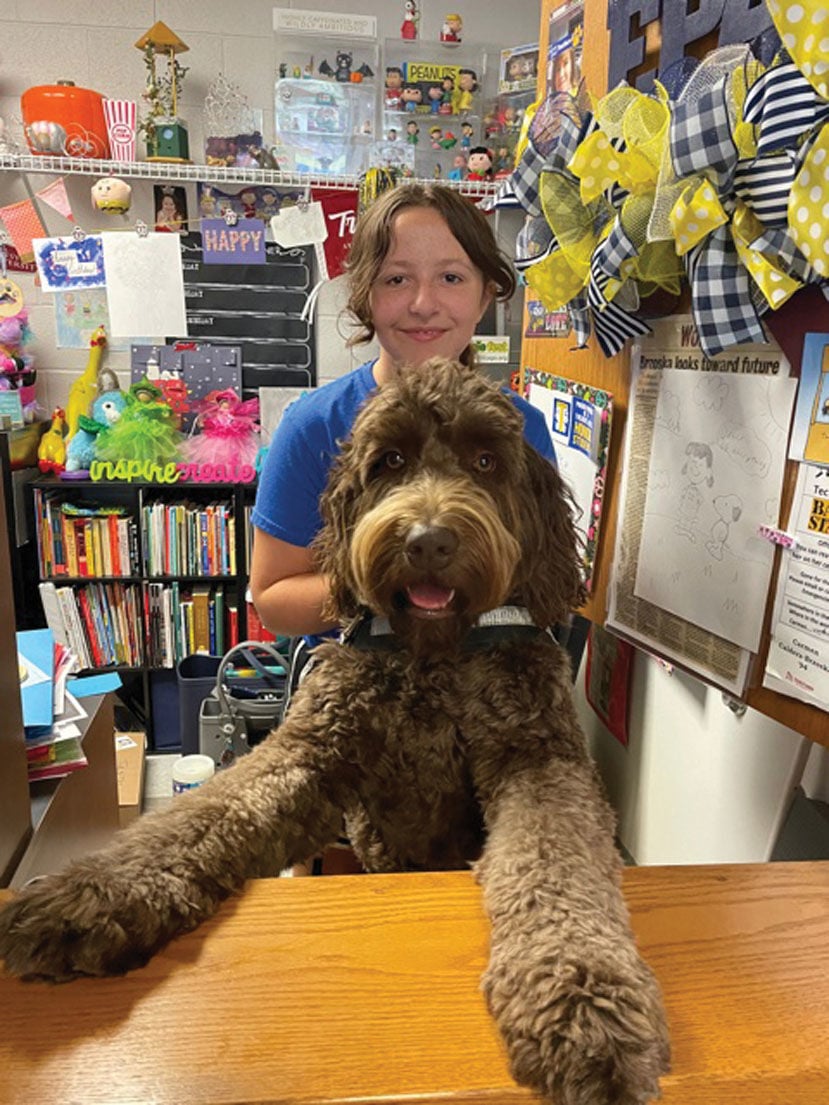 Boola, a therapy dog at T.K. Stone Middle School, takes a picture with a student. Therapy dogs have been implemented in schools in both districts. 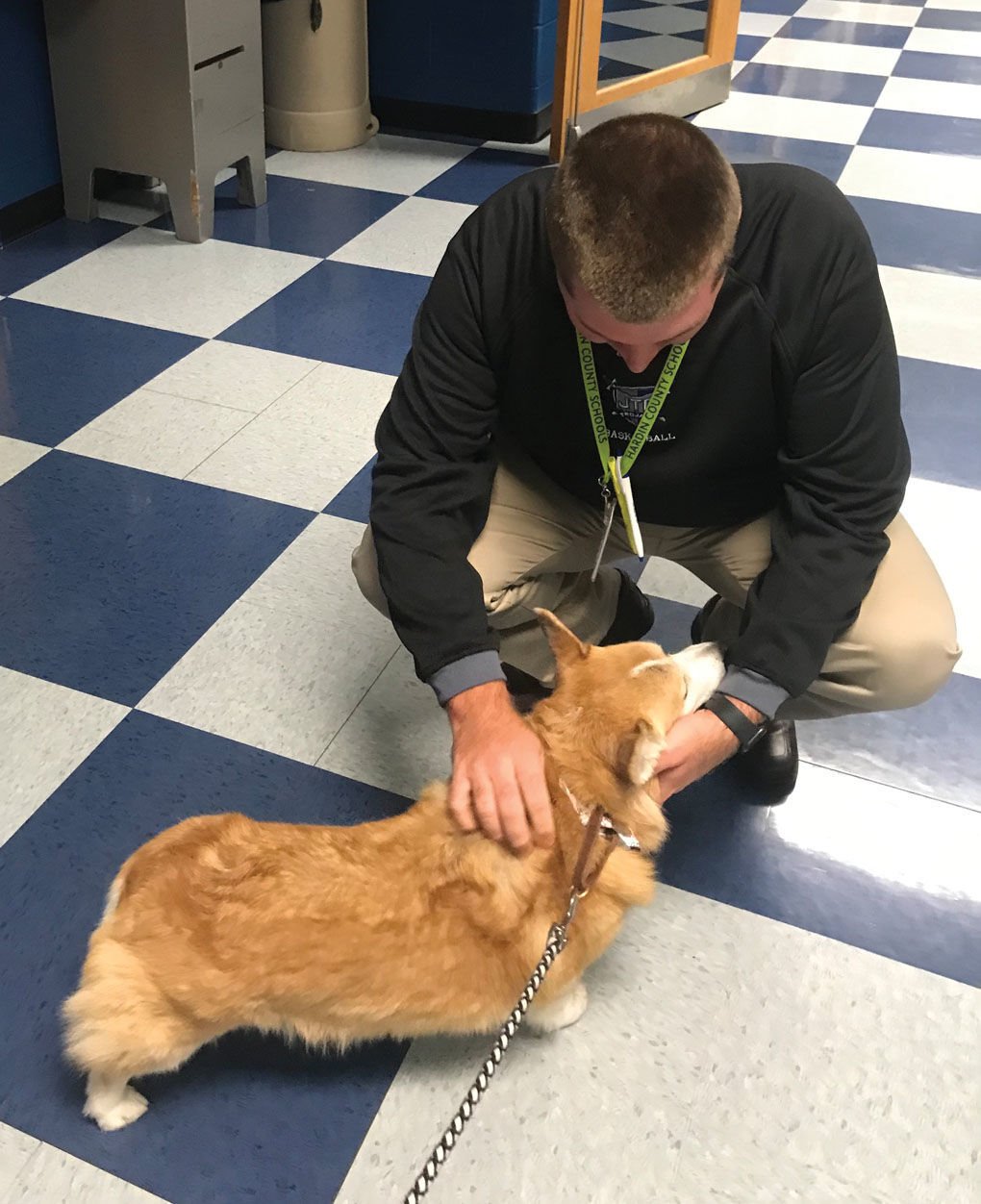 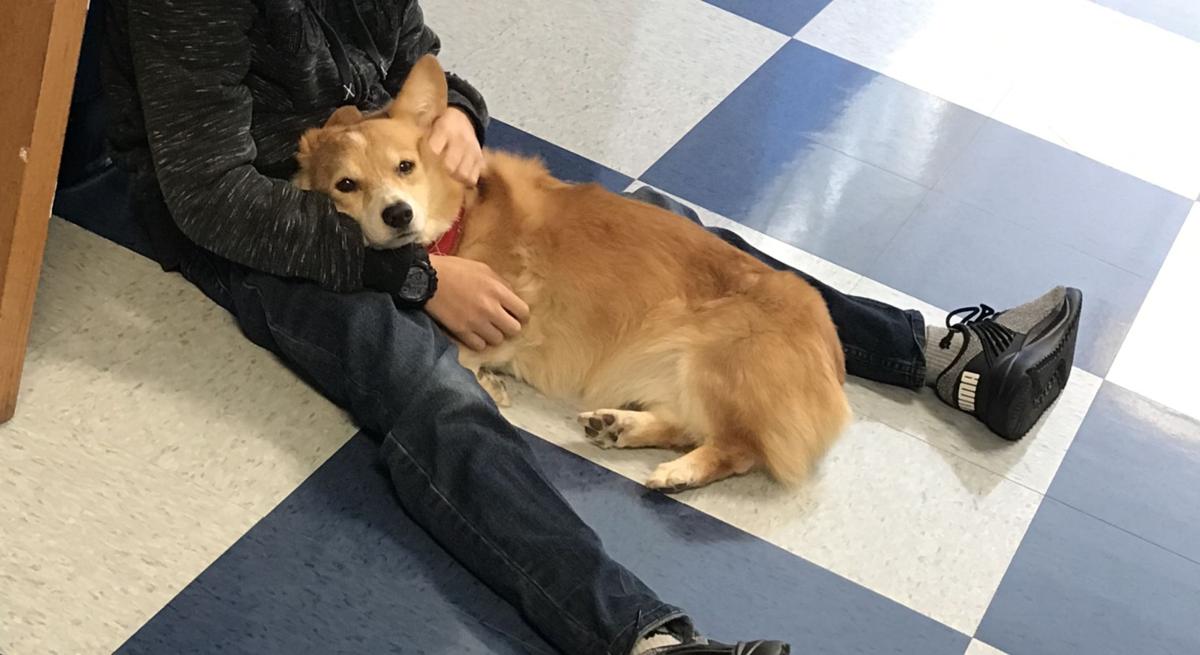 Therapy dog, Victoria, is petted by a J.T. Alton Middle School student. Therapy dogs have been implemented in schools in both districts.

Boola, a therapy dog at T.K. Stone Middle School, takes a picture with a student. Therapy dogs have been implemented in schools in both districts.

Therapy dog, Victoria, is petted by a J.T. Alton Middle School student. Therapy dogs have been implemented in schools in both districts.

With the stresses of school, both local districts have implemented therapy dogs in different capacities to help ease tensions on students and staff members.

Tabitha Kerr, a sixth- and seventh-grade reading teacher at T.K. Stone Middle School in Elizabethtown Independent Schools, soon will be implementing her dog, Max, into the school as a therapy dog.

Kerr said she felt Max’s temperament would be a good fit for a therapy dog, including at the school she works at, which already has a therapy dog.

T.K. Stone Principal Dawne Swank certified Boola as a therapy dog through WAGS Pet Therapy in Louisville. She makes her way down the hall with Swank, greeting students along the way.

Beginning in early spring, Kerr has been getting Max training to become a therapy dog which includes an orientation, classes and assessments. She also has been talking to her class about Max and what to do to prepare.

Kerr said she expects to have Max in the school working as a therapy dog now that fall break has ended.

Swank said she had noticed that animals could emotionally impact children and adults in a positive way a few years ago.

With the therapy dogs, Swank said students can open up more around them and be a calming force as well. Kerr said this also comes in handy because COVID-19 has caused stress among schools.

“To see how the kids react to the dogs when they are brought in, it’s pretty rewarding. We’ve got a lot of kids that relate better to animals sometimes than they do people,” Swank said.

Sylvia Stuckey, a special education teacher at J.T. Alton Middle School in Hardin County Schools, has had two therapy dogs work at the school since 2018, Clint and Victoria.

A few weeks ago, Clint died. Stuckey said he had accumulated about 850 hours of service at the school. She got him in 2008, and said he had the best temperament, one that she thought would be good as a therapy dog.

Stuckey said both of her dogs were trained through the Fort Knox Red Cross Pet Therapy program.

Once her dogs were trained and certified, it took the permission of not only the principal but also signed permissions from her parents of students to use them.

Stuckey said the children at the school love the dogs, not only her own students, but students all over the school are able to visit the dogs if they have permission. Staff members also have the opportunity to visit as well.

Stuckey said she would have students that had behavior issues and after she began bringing the dogs in, students began to calm down easier. She said students also are now more careful about being messy and dropping things on the floor.

She also said the loss of Clint has been a learning experience for her students in them learning about a tough part of life — understanding and dealing with death and loss.

Currently, Stuckey has another dog she is training to be a therapy dog, Gabby.

For those who are thinking of having their dogs become therapy dogs, Stuckey said they need to be exposed to a variety of scenarios to ensure they’ll be under control.