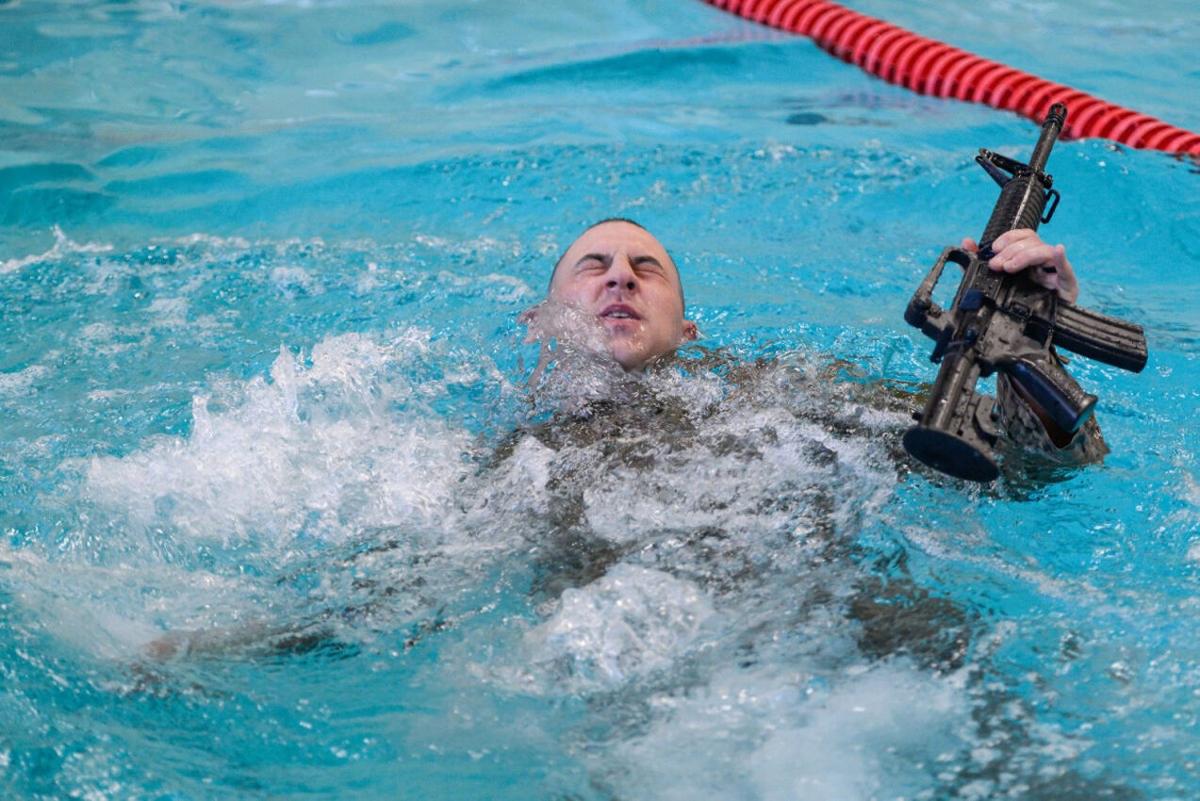 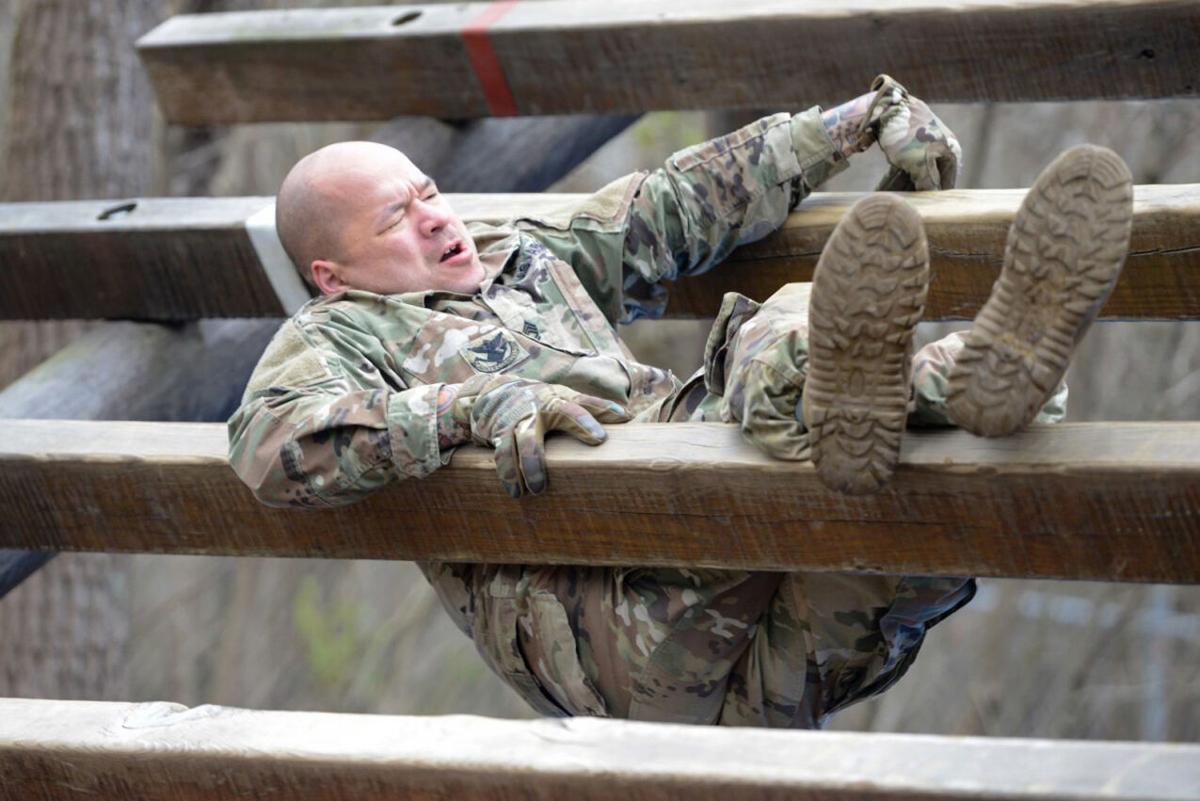 On the third day of the 2021 Best Warrior competition last week at Fort Knox, competition included a tough confidence course, night and day land navigation and a stress shoot. 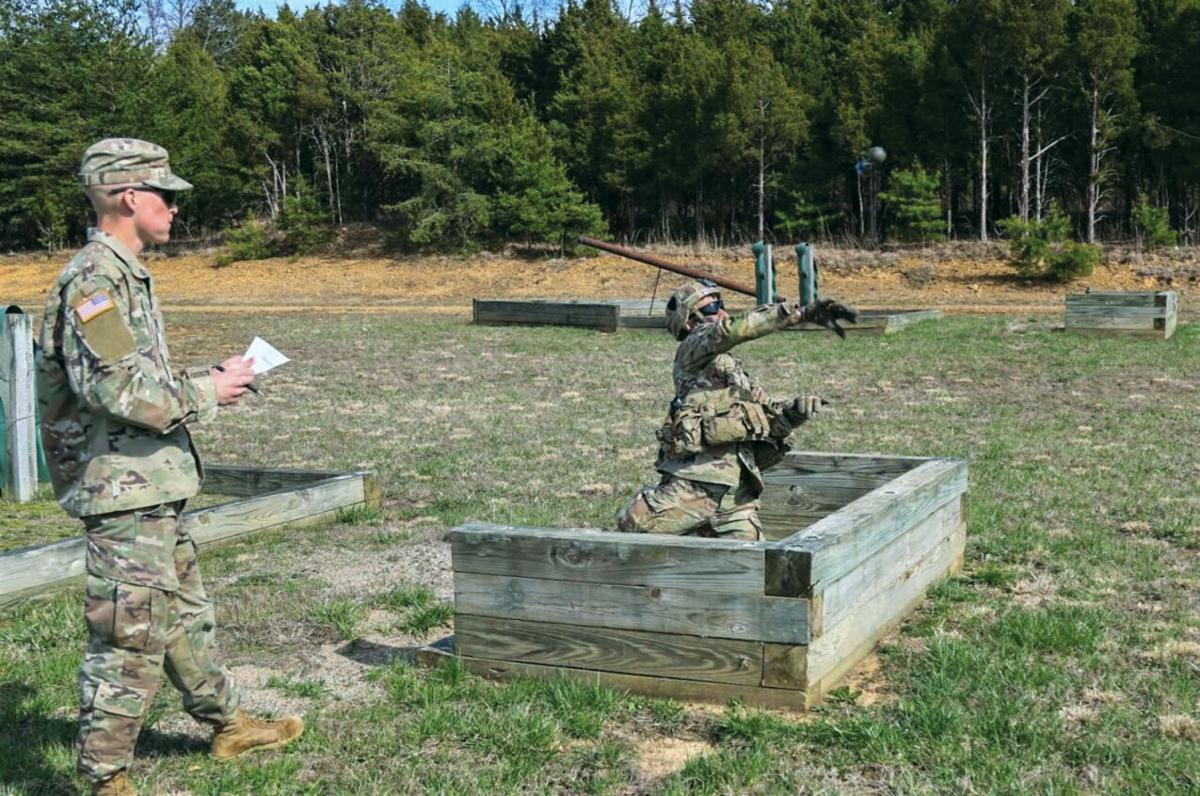 Spc. Daniel Woolvine, a military science instructor at 1st Brigade, ROTC University of North Georgia, tosses a grenade at the next target during the 2021 Best Warrior competition last week at Fort Knox.

On the third day of the 2021 Best Warrior competition last week at Fort Knox, competition included a tough confidence course, night and day land navigation and a stress shoot.

Spc. Daniel Woolvine, a military science instructor at 1st Brigade, ROTC University of North Georgia, tosses a grenade at the next target during the 2021 Best Warrior competition last week at Fort Knox.

A large crowd had gathered in the stands and on the parade grounds at Brooks Field late last week to find out who won.

Soldiers from each of the major commands formed up and waited. A gap separated units positioned in the middle of the formation. Virtually everyone was there, everyone except for the 35-plus soldiers who had competed for the right to be called the Best Warrior.

Then, choppers were heard in the distance as four of them appeared from the direction of the historic water towers.

“Here they come!” a soldier shouted from the stands.

As the helicopters landed, the competitors, in combat gear, jumped out and quickly took up prone fighting stances in the grass. They then formed up after the helicopters departed, and filled in the gap.

“It is an Army day when you can watch a flight of Blackhawks land on the parade field and see soldiers get off. Hooah?” said Maj. Gen. John Evans Jr., commanding general of U.S. Army Cadet Command and Fort Knox. The crowd returned his hooah.

“The intent of the entire thing was to create an arduous event for the competitors, heavily reliant on the physical side of things,” he said. “When I talked with Command Sgt. Maj. (Jerimiah) Gan, his intent was to create best warriors, not the best (soldiers) at the (promotion) board.”

Whiteley said the challenges separated the pack of noncommissioned officers fairly early. The lower enlisted soldiers however, proved to be a different story.

“The NCOs kind of played out early, but on the soldiers’ side it was an extremely close competition until the foot march was complete,” Whiteley said. “The soldiers were within a couple of points of each other. Any event could have put one of them up.”

One of those soldiers in the running by the time of the foot march was Spc. James Spoerl, from 1st Theater Sustainment Command. Though this was his first Best Warrior competition, Spoerl said he wasn’t completely clueless about what to expect.

“Leaders gave me some things to study and told me to go in with a good attitude,” he said. “It was tough, though. There were a couple of guys out there who did well in areas that maybe I wasn’t the best in.”

Spoerl said he was a little distracted coming into the competition. The week prior, he had received some big news.

“I just got accepted into West Point,” he said. “My head was definitely on the West Point news, but I was also trying to focus on Best Warrior, too. Finding out I had made it right before the competition definitely gave me a nice little boost.”

On the NCO side, Sgt. 1st Class Ronald Roden, from 1st Army Division East, was looking for a win. He had competed in last year’s NCO of the Year competition and later captured second place at the 1st Army competition. That year, COVID-19 forced leaders to do away with most physical events and rely on paper accomplishments.

“They took out all the physical events last year,” he said, “so the only thing we did for 1st Army was a board.”

Going into this year’s competition, Roden thought he had a good chance at winning because leaders at his unit gave him ample time to prepare.

“Physically, I felt better than I ever have, even at my age,” said Roden, who turns 38 later this month. “I was more physically prepared, especially for the challenges I knew was going to happen. I felt unbeatable.”

An 11B infantryman, Roden said one set of tasks caught him by surprise.

During the closing ceremony, the narrator read off the names of each competitor, and called the crowd to applaud all their efforts.

“Every command was able to identify their best. Some of the commands sent their best, and some of them allowed us to send their best,” said Whiteley. “At the end of the day, we had extremely high caliber people out there.”