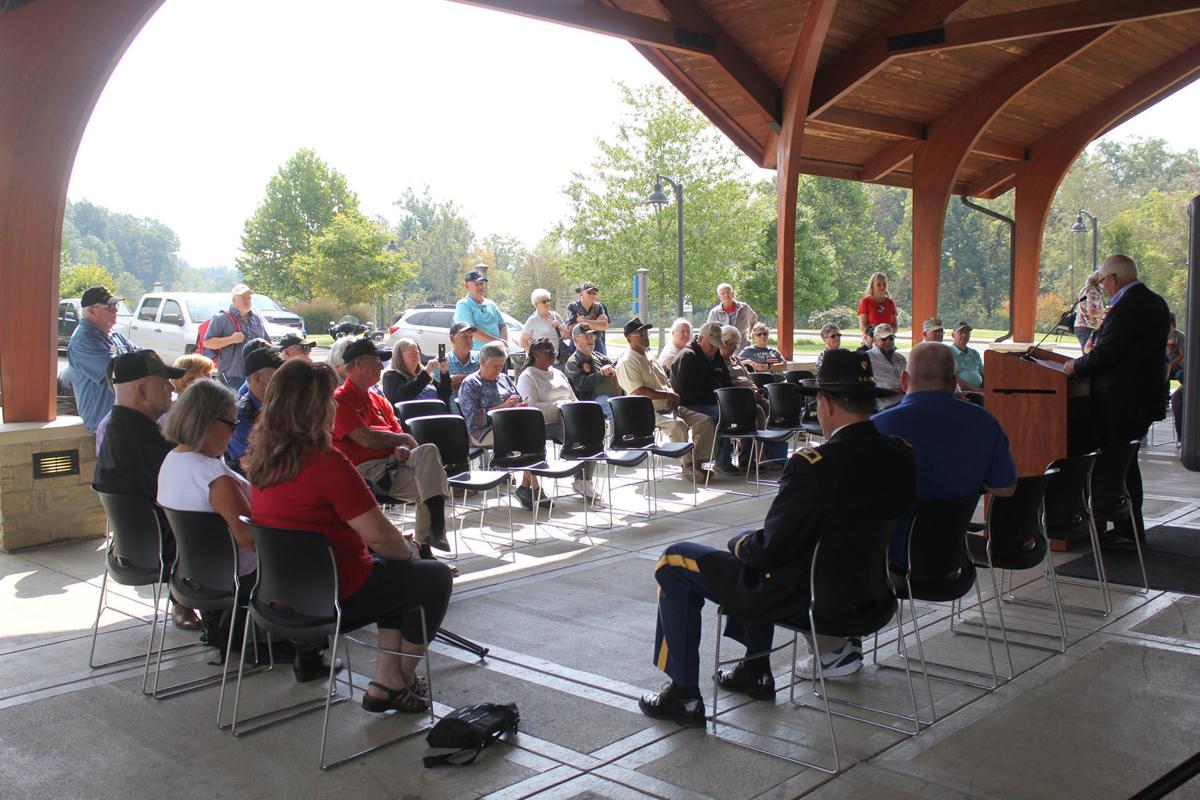 A busload of Vietnam veterans from the Lexington area made a stop Saturday at the replica Vietnam Memorial Wall at the Elizabethtown Nature Park. 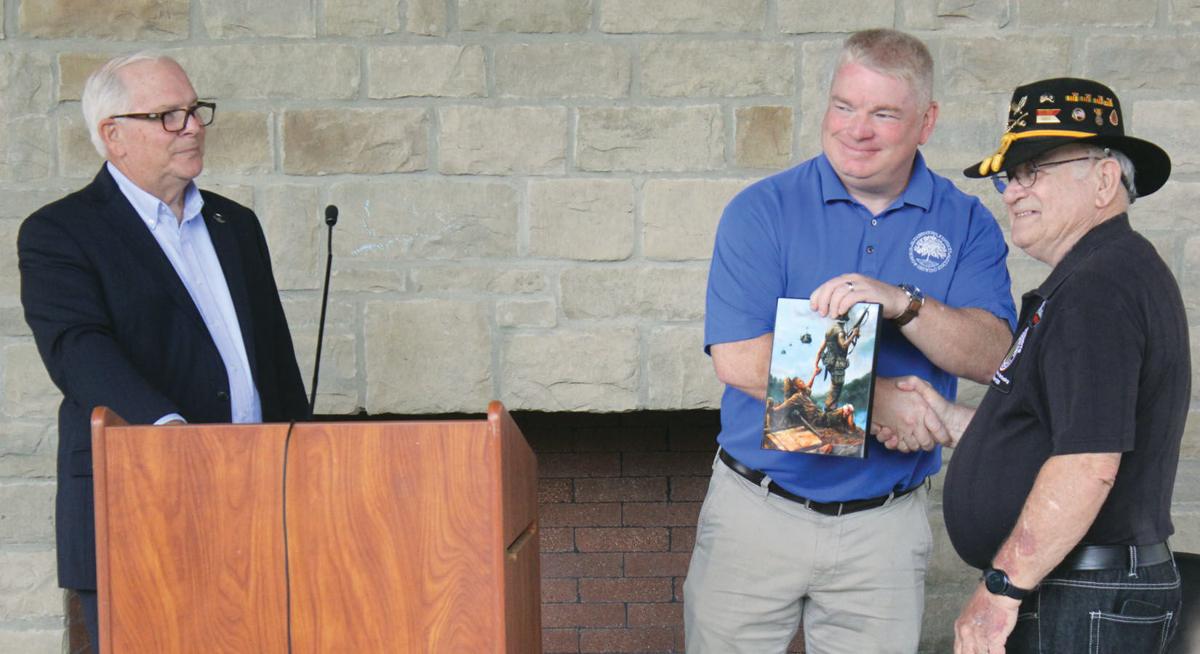 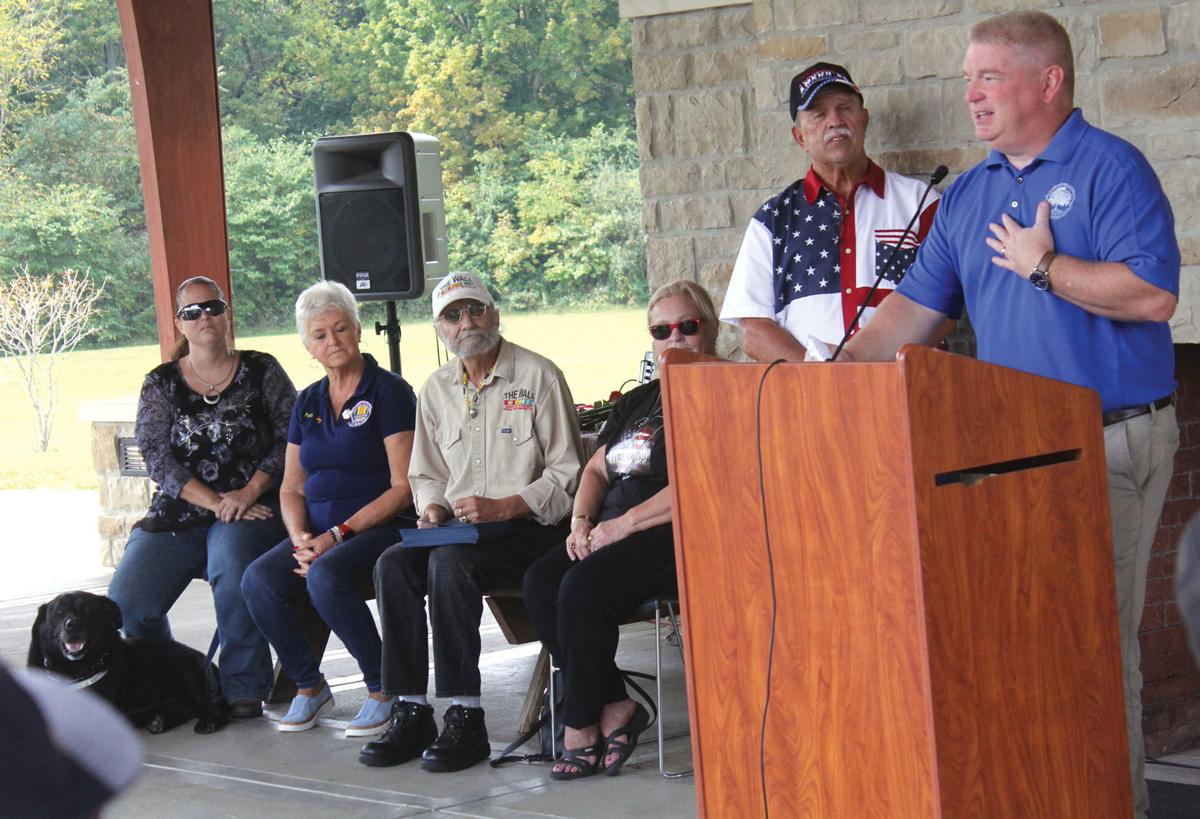 Mayor Jeff Gregory speaks during a small ceremony Saturday held for Vietnam veterans who stopped at the replica Vietnam Memorial Wall at the Elizabethtown Nature Park.

A busload of Vietnam veterans from the Lexington area made a stop Saturday at the replica Vietnam Memorial Wall at the Elizabethtown Nature Park.

Mayor Jeff Gregory speaks during a small ceremony Saturday held for Vietnam veterans who stopped at the replica Vietnam Memorial Wall at the Elizabethtown Nature Park.

U.S. Army and Vietnam War veteran Carey “C.T.” Christie is calling for military organizations and the community to unite and give their support for the addition of a medevac helicopter at the replica Vietnam Memorial Wall at the Elizabethtown Nature Park.

“I want to ask all veteran organizations to come together to show unity to bring the medevac helicopter to our great Vietnam Memorial Wall and to put our differences aside and unify our efforts to honor the medevac Huey that saved so many lives on the battlefield,” Christie said Sunday.

Christie said the addition would honor the Huey itself and all the medevac crews that saved many lives during the Vietnam War. He presented the addition of a full-scale replica helicopter during the Sept. 13 Elizabethtown City Council meeting.

Since then, he has been told the council is not in favor of the Medevac helicopter at the nature park.

One reason Christie was given against the helicopter is that it would take away from the serenity at the wall and nature park.

“I do not see how or understand how adding such a great honor and tribute would take away from the serenity that is at the Vietnam veterans memorial wall,” he said.

Mayor Jeff Gregory said the city is excited about the possibility of a full-scale Huey in the community. However, as a group, he said Friday tht council felt it wasn’t in their best interest to have it at the nature park and that the replica Vietnam Memorial Wall makes more of a statement as a standalone monument.

Gregory said the city offered the alternative of the American Legion Park on North Miles Street.

On Saturday, a busload of Vietnam veterans from Lexington made a stop at the replica Vietnam Memorial Wall in Elizabethtown. A small ceremony was held to recognize the veterans and honor their fallen comrades. A few of the veterans in attendance spoke about how crucial the medevac was to survival in Vietnam.

“Only God knows how many names we’d actually be reading on the wall,” he said. “… What could be more fitting than having a Huey Medevac helicopter in the background of this memorial and in this park?”

Vietnam veteran Ron Logan said the Huey was not just a helicopter. It was a symbol of freedom to those in the jungle. It kept them in touch with families, brought supplies and much more.

During Saturday’s event, the veterans presented Gregory with a print depicting a soldier standing guard waiting for the inbound medevac to be put on display at City Hall. They also presented him with smaller, framed versions of the print to present to city council members.

The replica Vietnam Memorial Wall is an 80% scale replica of the Vietnam Veterans Memorial in Washington, D.C. The Veterans Tribute Group signed a contract with the city in March 2017 for the wall, which is built near the Hardin County Veterans Tribute at the park. The wall was dedicated in April 2018.

Christie spearheaded fundraising, design and construction of the wall. The idea was to build a memorial to honor all services, all veterans, all conflicts and give all veterans a place to come reflect and heal and remember. And it’s done that, Christie said.

They also wanted to honor all dogs and dog handlers, which they’ve done with the addition of the dog handler statue.

Christie said the medevac helicopter is not adding a new monument in the park, it is adding to the already existing memorial. He said the helicopter will look like it’s hovering above the apex of the wall.

“I feel this addition to our great Vietnam veteran memorial wall would not disgrace the nature park, but add more honor, prestige, and greatness to our Vietnam veterans memorial wall,” he said. “I am asking all veterans and veterans organizations to please come on board with this project and set aside all differences to come together to honor the medevac services that still go on today a save so many lives.”

Christie said he and others have begun collection signatures to petition the council to reconsider its decision not to install the medevac helicopter at the nature park.