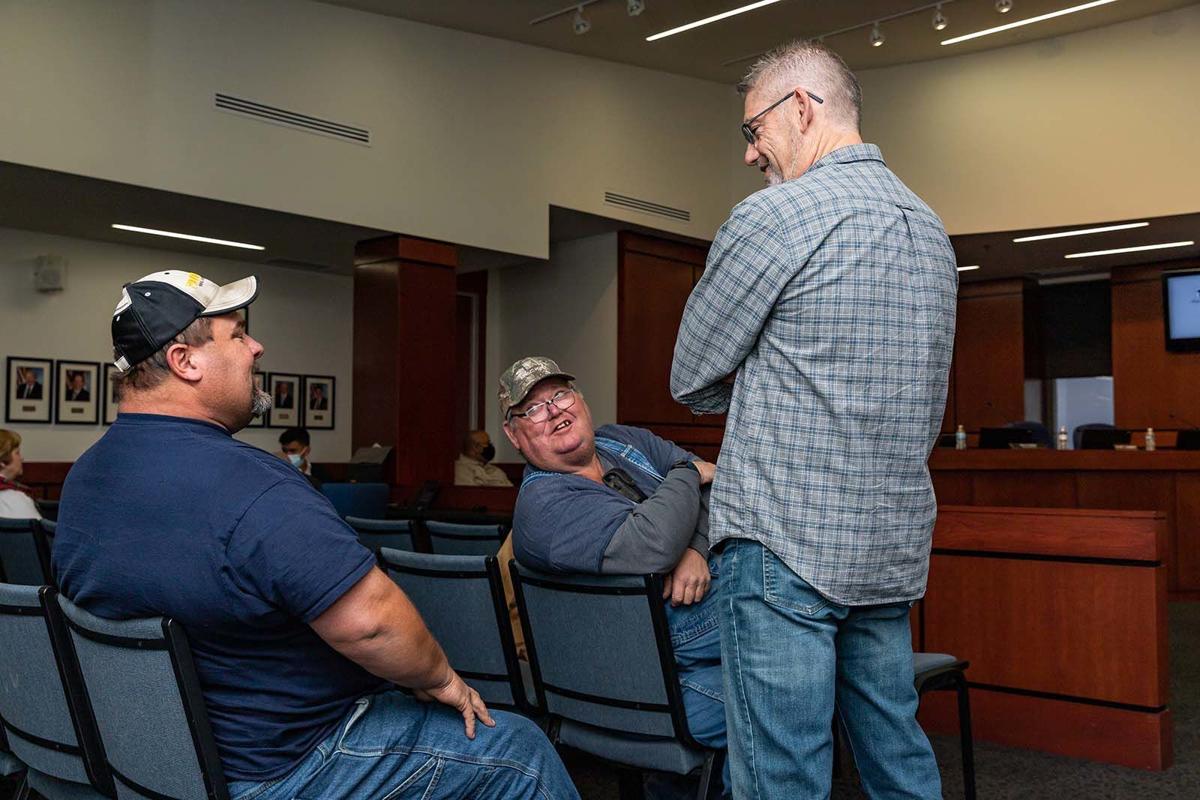 Keith Taul, right, a member of Hardin County Citizens for Responsible Solar, speaks Tuesday night to Kerby Grey, left, one of the property owners requesting a zone change, and Kevin Grey, Kirby’s brother, at a meeting of Hardin County Planning and Zoning Commission. The Tauls and Greys live near each other. 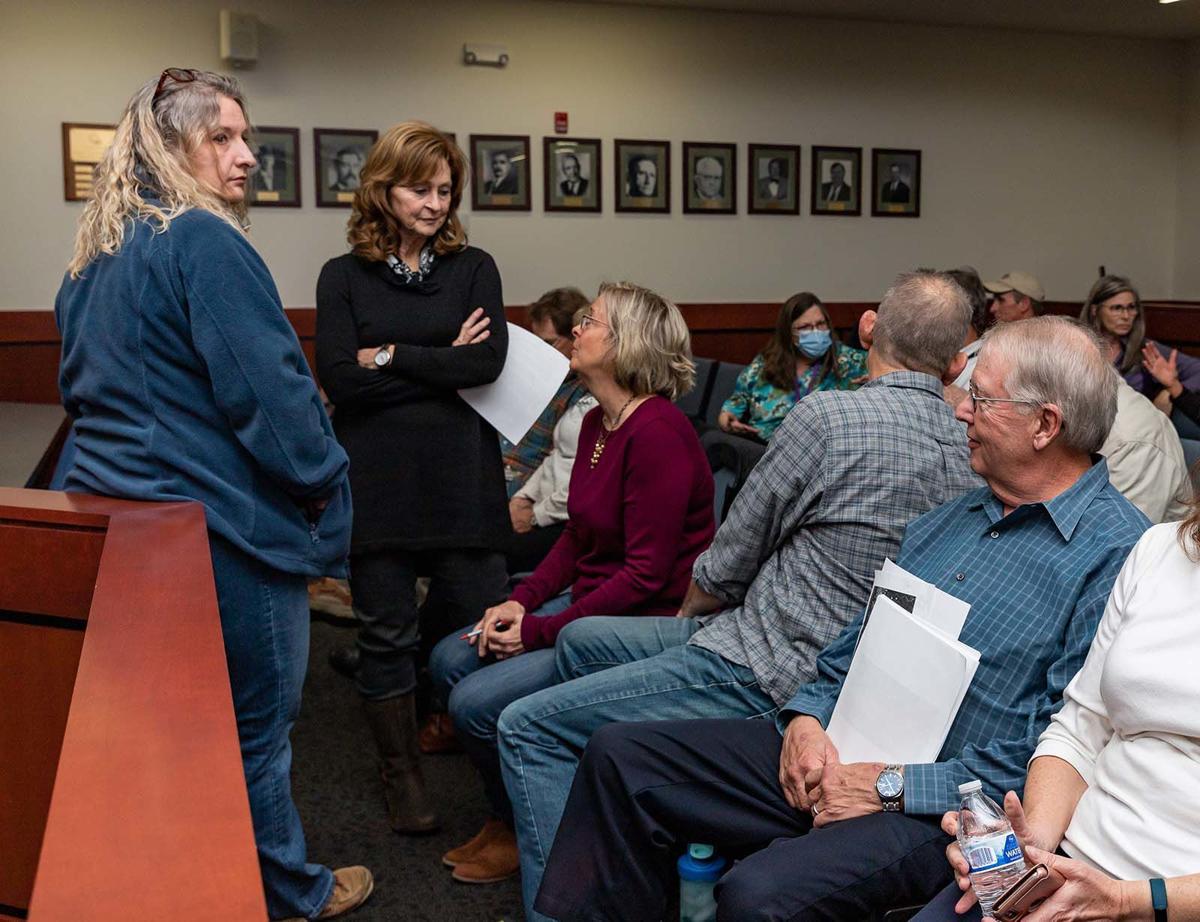 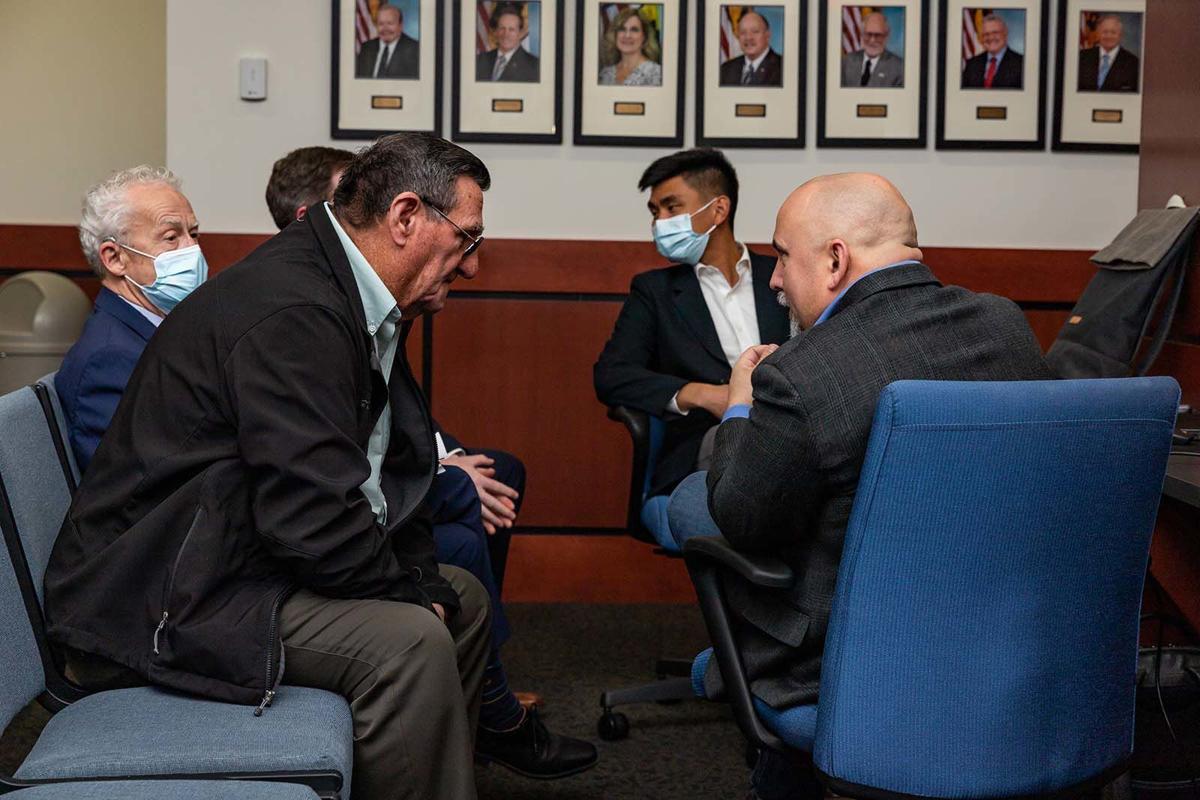 Clayton Grey, left, an owner requesting a zone change for his property, and ibV Energy Partners Vice President of Business Development Robin Saiz, who is proposing the Rhudes Creek Solar project on Grey’s property, speak with each other prior to Hardin County Planning and Zoning Commission’s meeting in the Hardin Fiscal Court room.

Keith Taul, right, a member of Hardin County Citizens for Responsible Solar, speaks Tuesday night to Kerby Grey, left, one of the property owners requesting a zone change, and Kevin Grey, Kirby’s brother, at a meeting of Hardin County Planning and Zoning Commission. The Tauls and Greys live near each other.

Clayton Grey, left, an owner requesting a zone change for his property, and ibV Energy Partners Vice President of Business Development Robin Saiz, who is proposing the Rhudes Creek Solar project on Grey’s property, speak with each other prior to Hardin County Planning and Zoning Commission’s meeting in the Hardin Fiscal Court room.

In a highly anticipated meeting Tuesday night of the Hardin County Planning and Zoning Commission, a zoning change unanimously was approved for property of a proposed solar project.

According to planning commission chairman Mark Hinton, the zoning change and not the intent of the property’s usage was the only item up for consideration.

“We have to consider that we don’t really know what they’re going to do with that ag zone,” he said. “We have to make our decision based on if you look at the photographs provided of literally farmland and they’re wanting to make it into an agricultural zone. From where I sit, that’s very difficult to look at crop land like that and say that it can’t be an agricultural zone.”

The zone change was 11 tracts of land totaling 1,072 acres for property owned by Clayton, Geraldine and Kerby Grey and Eugene and Dorothy Hill along Hardinsburg, South Black Branch and Hansborough roads in southwest Cecilia.

In June, the commission approved rezoning of the property from Rural Residential (R2) to Agricultural (A1) and repeated its decision Tuesday night.

“The results of tonight were kind of what we expected and we were happy with based on the previous meeting and vote we got on the zone change to agricultural,” ibV d said.

The decision was returned to the planning commission after a lawsuit filed by ibV and the property owners challenged the legality of a portion of the county’s ordinance forcing a zone change and conditional use permit be heard by the planning and zoning commission.

The lawsuit was filed after the planning and zoning commission denied ibV’s conditional use permit 3-1 for the solar project.

Hardin Circuit Judge Kelly Easton found a structural flaw with the ordinance and remanded the rezoning and permitting process back to the county to start anew.

Since the first attempt to approve the zone change and conditional use permit a group opposed to the project, and others like it, has formed.

Keith Taul, a member of Hardin County Citizens of Responsible Solar said he was disappointed with the commission’s decision.

“It was a difficult process to split out these two things, especially when the presentation by (Hardin County Planning and Zoning Director Adam King) mentioned solar as the intent to switching this land to agriculture,” he said.

Although he understands the commissioners’ decision, Taul said he was frustrated the speakers for the group were not allowed to speak to the intent of the zone change, which is part of the conditional use permit.

“Then the commissioners making the decision have a tough job too of trying to split it out,” he said. “I don’t think you can. … It’s obvious what’s going on. There’s nothing about solar energy that’s agriculture.”

Trina Martin, also with the group, said she was hopeful the zone change would not be approved but understands why it was.

“I understand they had to separate that,” she said. “It will help preserve the property and I like that the minimum lot size. My problem was with the intent of why it was being rezoned. So we have a bigger fight in January.”

Mark Thomas of Elizabethtown, who attended the meeting, said as a farmer he was “100% for an ag zone” and thought the commission made the appropriate decision.

However, Thomas believes solar projects, such as the one proposed by ibV, should be limited to industrial zones.

“I think it paints agriculture in a bad light,” he said. “In the future, if someone wants to make an agricultural zone to protect their farmland for future generations or tax benefits or whatever, there could potentially be neighbors who think” it would be used for a solar project, which might not be the case.

“That’s where the conditional use permit comes in,” he added. “I think (the commission) did a very good job clearing that up. Every time a farmer wants to rezone their property as an ag zone, it should be a slam dunk.”

According to King, the conditional use permit meeting, which will be heard by the Board of Adjustments, is at 5 p.m. Jan. 6 in the Fiscal Court room on the third floor of the Hardin County Government Building, 150 Provident Way in Elizabethtown.

The group will prepare for the upcoming meeting and plans to oppose the conditional use permit, Taul said.

“We will be prepared for the next step,” he said. “Unfortunately, it’s in front of a whole another group of people who haven’t heard these things before, so we’ll have to be ready to educate them on the things that aren’t so obvious when they listen to the news.”

Property owner Clayton Grey said although he’s disheartened by his neighbors’ opposition, he plans to see the process through.

“I know we have a lot of opposition and a lot of neighbors have a lot of questions, but I still believe this is the best for me and my family,” he said. “They passed it so we’ll just have to go to the next step.”

Grey said he did his due diligence before reaching his decision to lease his land to ibV.

Saiz said he is looking forward to another chance to present the positive aspects of his company’s project.

“Now we have the opportunity once again to present all the benefits with our project and try to provide accurate facts about the project to dispel a lot of the misinformation that’s out there,” he said. “That’s all we want is a fair shot to present the facts and the benefits of the project and all it’s going to do for the community.”