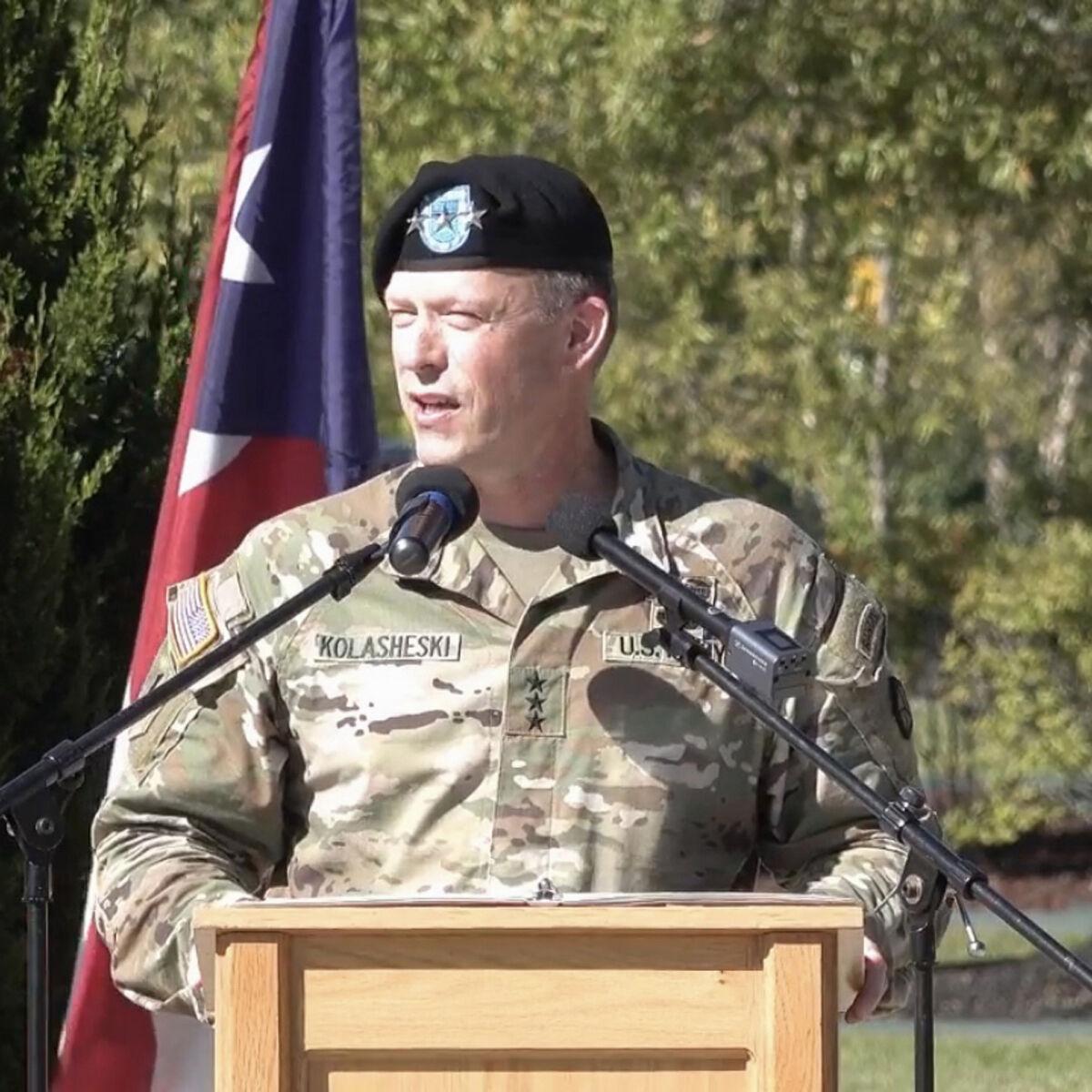 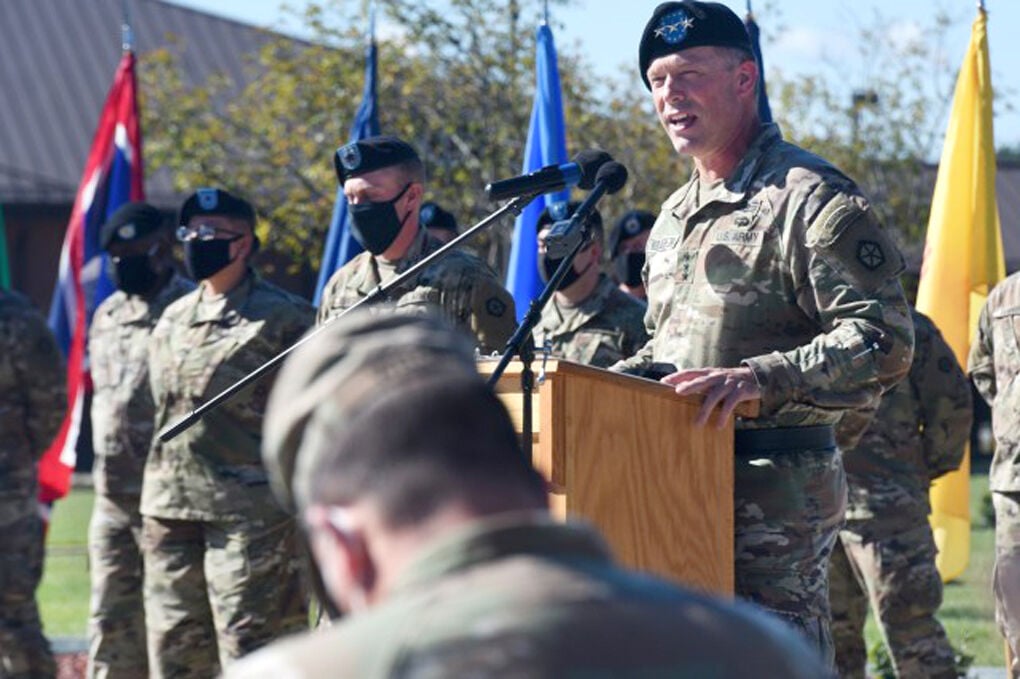 V Corps Commander Lt. Gen. John Kolasheski speaks Friday to those gathered at a ceremony at Fort Knox to praise soldiers who have been involved in standing up the three-star command as well as to share a little about V Corps history. 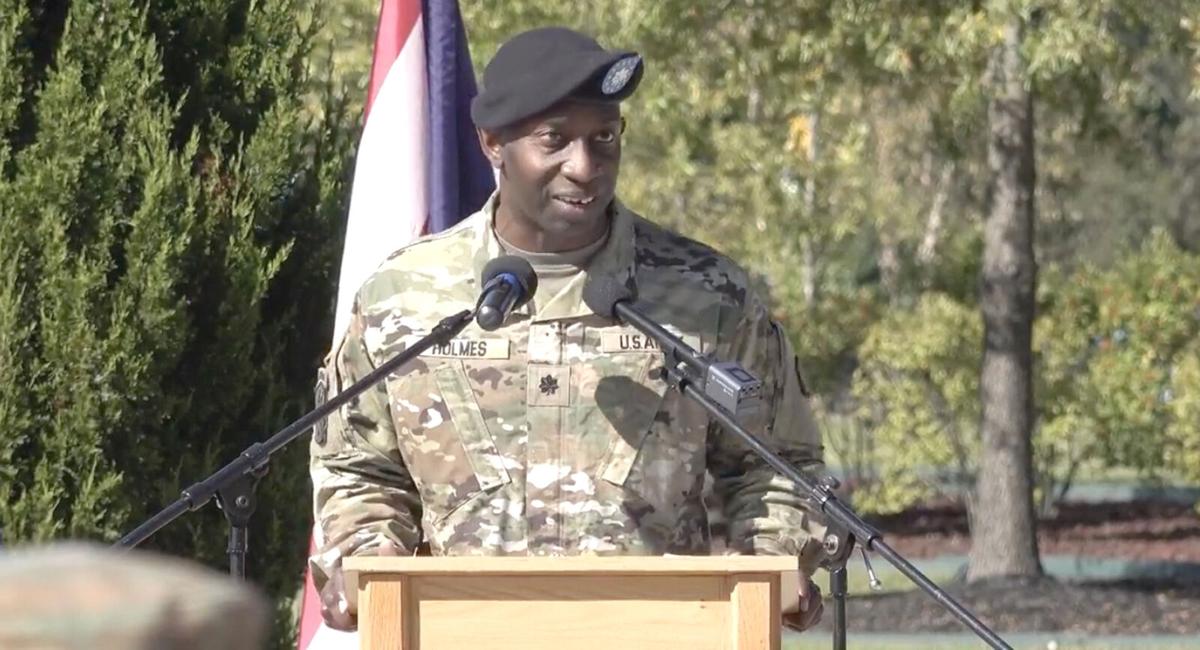 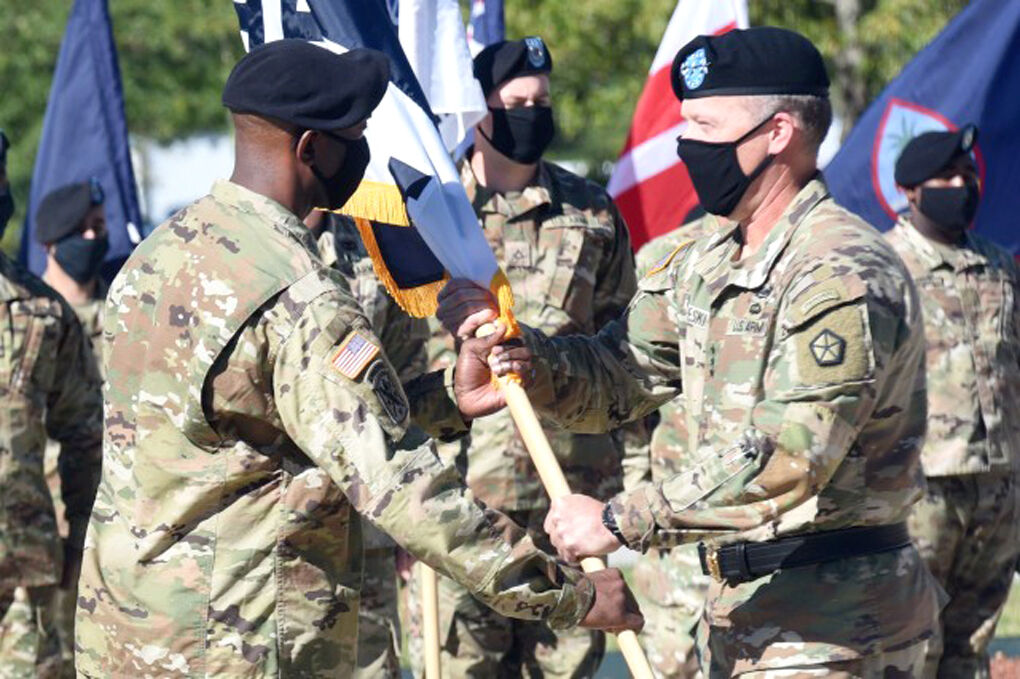 V Corps Commander Lt. Gen. John Kolasheski speaks Friday to those gathered at a ceremony at Fort Knox to praise soldiers who have been involved in standing up the three-star command as well as to share a little about V Corps history.

The U.S. Army V Corps is activated once again.

After seven years, the V Corps’ Headquarters and Headquarters Battalion flag flies again. It was uncased Friday during an activation ceremony at the Lt. Gen. Timothy J. Maude Complex at Fort Knox.

Soldiers from the battalion stood in formation in front of a large V Corps insignia mounted on a building at their new home in the Maude Complex, according to a Fort Knox News post. Access to the ceremony Friday was limited because of coronavirus concerns.

“Make no mistake, the hard work of the soldiers of (Headquarters and Headquarters Battalion) has been paramount in setting the groundwork for our activation,” said Lt. Gen. John S. Kolasheski, commanding general of V Corps. “This unique unit has the task of building teams as well as providing world-class support both to the headquarters staff here at Fort Knox and the staff that will going forward to Poland. They have worked tirelessly to integrate with the team here at Fort Knox.”

The primary mission of the new forward headquarters in Poznan, Poland, is to conduct operational planning, mission command and oversight of the rotational forces in Europe. It also will provide additional capability to support allies and partners in the region.

Friday’s ceremony served the dual function of unit activation as well as providing official recognition for assumption of command and responsibility for the soldiers, equipment and mission of the Headquarters and Headquarters Battalion Command team for Command Sgt. Maj. Ricardo Batiz-Torres and Lt. Col. Otha Holmes.

During his brief address at the ceremony, Holmes told Batiz-Torres he was excited to be his team member and battle buddy as they take the unit through its newest chapter. Holmes said Batiz-Torres is a “soldier of the highest character.”

The V Corps’ legacy dates back to 1918, when the unit was activated during World War I during combat in France. Later, it took part in the World War II D-Day invasion and liberation of Europe.

It was deactivated in 2013 in Germany.

“Now, 102 years since its inception, our corps is called on once again to conduct operational planning and mission command in Europe, Kolasheski said. “While this ceremony marks the completion of the stand up of this battalion, it is only the beginning of a legacy.”

Friday’s event was a precursor to a larger activation ceremony coming in two weeks.