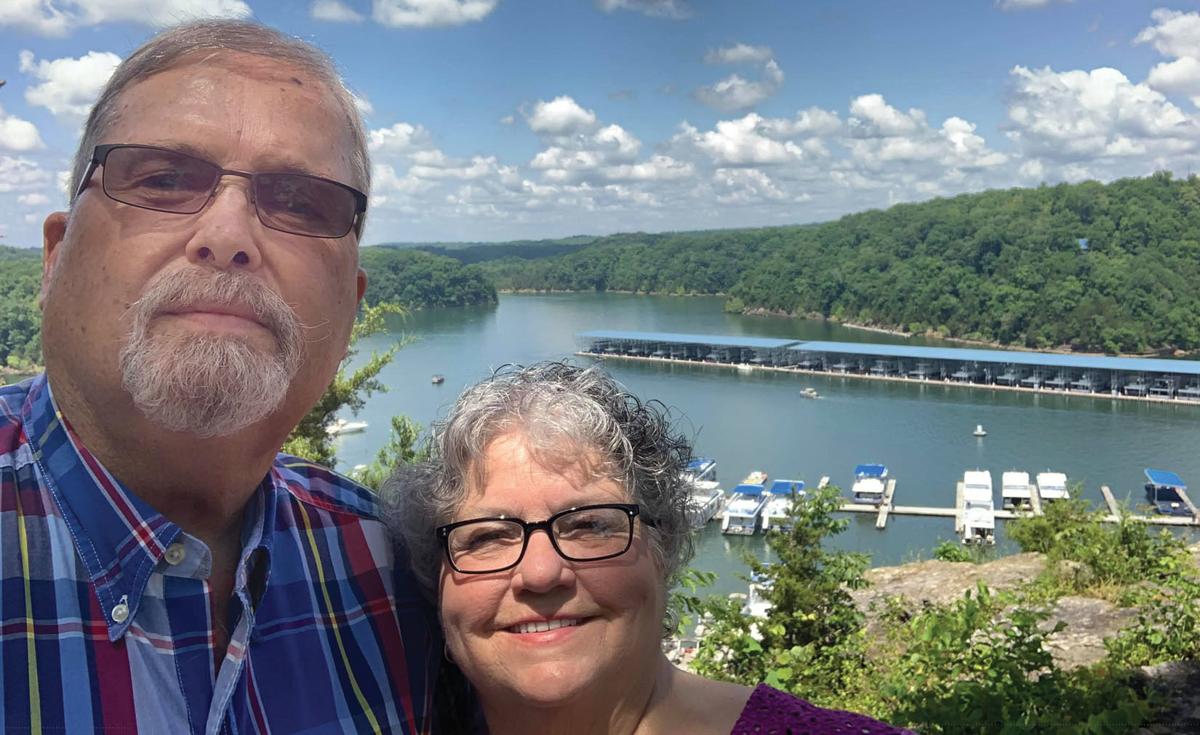 Garry Knight and Vickie Green found love in the middle of a COVID-19 pandemic. 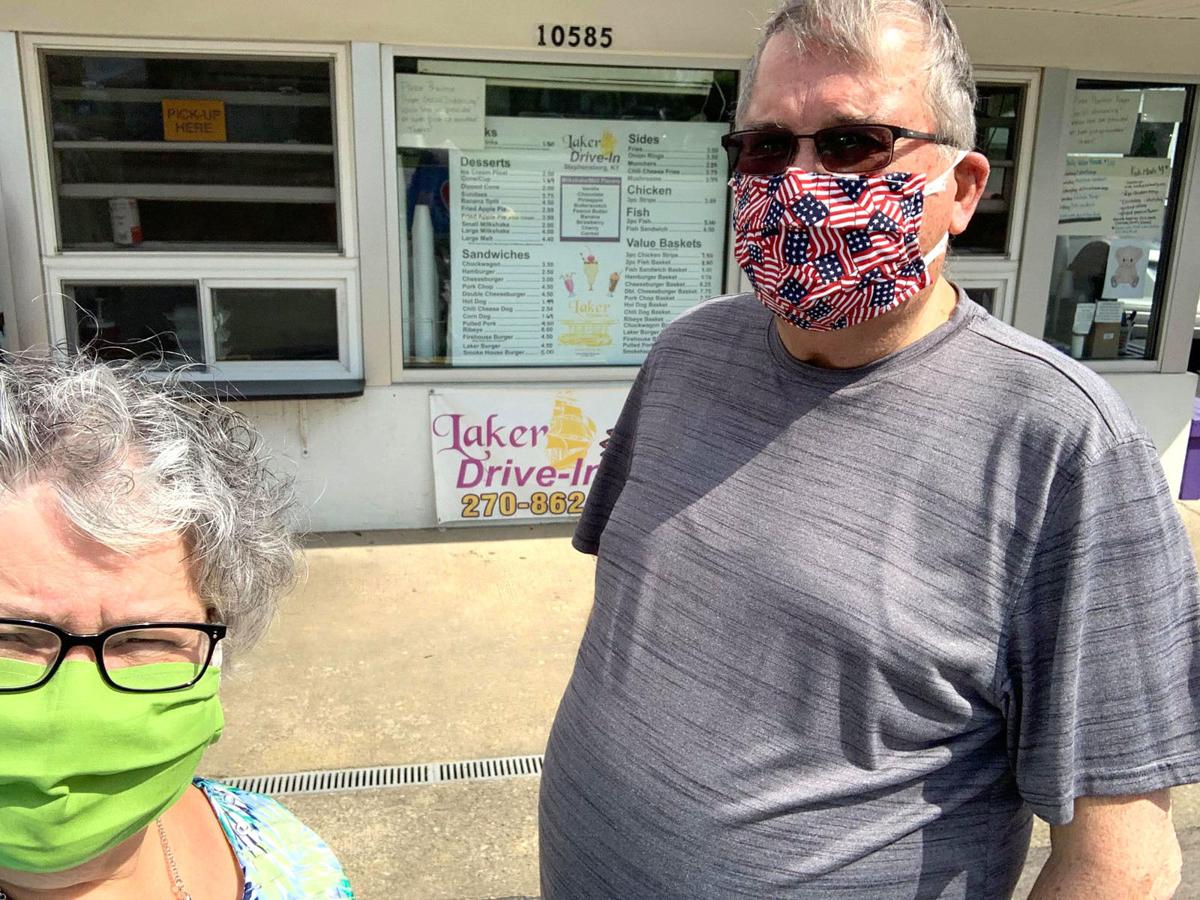 Vickie Green and Garry Knight go for a peanut butter milkshake at the Laker Drive-In. Their romance between began with the simple offer of a mask. 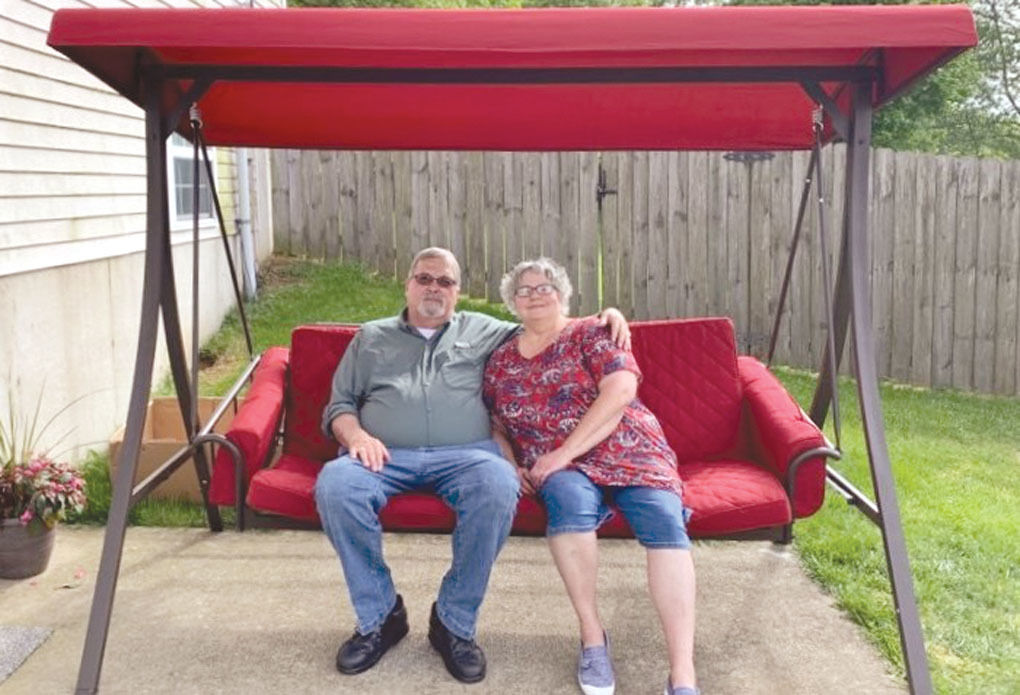 Garry Knight and Vickie Green sit in a swing. They began social distancing dating shortly after the beginning of COVID-19.

Garry Knight and Vickie Green found love in the middle of a COVID-19 pandemic.

Vickie Green and Garry Knight go for a peanut butter milkshake at the Laker Drive-In. Their romance between began with the simple offer of a mask.

Garry Knight and Vickie Green sit in a swing. They began social distancing dating shortly after the beginning of COVID-19.

While COVID-19 has caused many people to be further apart, it brought one Elizabethtown couple closer together.

“I knew it was something I could provide and I could do my part in helping my care-giving friends and the medical community with what was becoming a necessity,” she said.

When Green had several made, she stared delivering them to friends and senior citizens. One of those people was Garry Knight, 73.

After Knight received the mask, he texted Green to thank her. They texted back and forth a few times, talking about people they were concerned about and how sad it was to not be with their other choir friends at Severns Valley Baptist Church.

They also talked about being alone. Both Green and Knight had lost their spouses. Green was married to her husband, Rick, for 48 years and Knight to his wife, Marnell, for 49½ years.

“Many times our text began to look like we were starting to write a book,” Green said. “We soon realized we had so much in common and soon the long days of texting ended with late night phone calls.”

Green said at first, she felt guilty talking to a man on the phone. But then realized she wasn’t crying herself to sleep every night like she had since Rick passed away in January 2019.

“We both were so comfortable being able to talk of our lives with our spouses and what our dreams in life had been and we talked of what we missed about not having them in our life,” she said.

They began sharing devotionals and praying together, realizing they were spending a lot of time in “wonderful” conversations, she said.

During all this time, they had been quarantining from family and friends. Eventually Knight asked Green if she’d like to go on a social distancing date.

“We actually picked up our own lunch at Chick-fil-A and met with our vehicles several feet apart in the shopping center parking lot,” she said. “I was a nervous wreck.”

They talked for three hours in the parking lot that day. The next day he called her to see if she was home and was outside her door with a bouquet of flowers.

This was the first of several social distancing dates.

Eventually they decided it was safe to be in the same car together, because they had not been around other people, and went on an actual date. They took a long drive and purchased flowers to visit their spouses graves.

Green said she already had started to have feelings for Knight but when he suggested visiting their spouses graves it made her heart swell.

“We had many other dates with beautiful drives all while singing Christian and oldies music and talking of likes and dislikes and just life in general,” she said. “Fun times were starting to happen for sure.”

During those conversations Knight told her that after a few years of being a widower he started asking God to send someone into his life. His wife passed away in 2016.

They started sharing dinners and doing projects for fellow seniors.

Friends and family started telling them they saw a change in them. Green’s granddaughter told her she had pep in her step.

“We were becoming alive again,” she said. “We both realize that the fate of COVID brought us together much quicker than we imagined but also both know this was God’s plan.”

Each day was beginning to take on new meaning.

“We realized we had fallen in love and started talking about marriage and what that would look like,” she said.

Knight was further along in his grief than Green was and she hadn’t begun to think about remarriage.

“But I knew I loved him very much,” she said.

One night when Knight fixed Green dinner there was a bouquet of her favorite flowers, sunflowers, on the table and an engagement ring in the bouquet.

“He asked me to be his wife for the rest of his life and I proudly said yes,” Green said. “We are looking forward to many years of fun and travel and seeing where God will use us.”

The wedding is Oct. 17 at Severns Valley.

Because of COVID they may only be able to share the wedding with a few family and friends.

“We have many of the same friends and they have all been with us in the sad times and we want them with us in this wonderful time as we begin a new life together,” Green said.

Green said they both really loved their spouses and continue to miss them.

“But at the same time we can’t imagine life without each other,” she said.