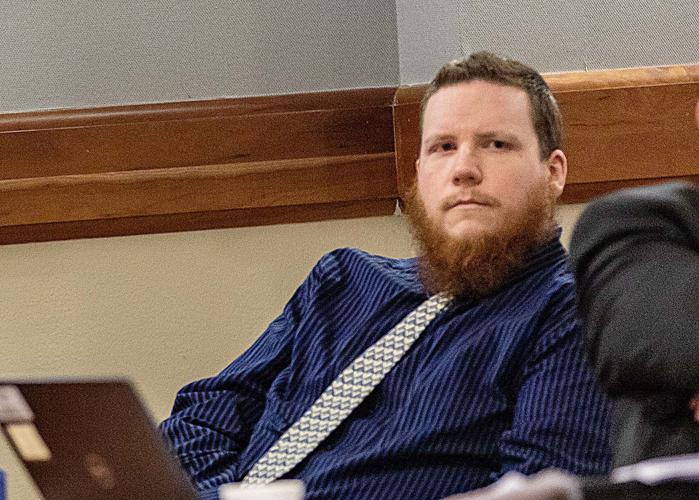 Joseph Meredith, who was found guilty of murder Friday, listens as his attorney Andrew Rhodes delivers his closing arguments in Hardin Circuit Court. 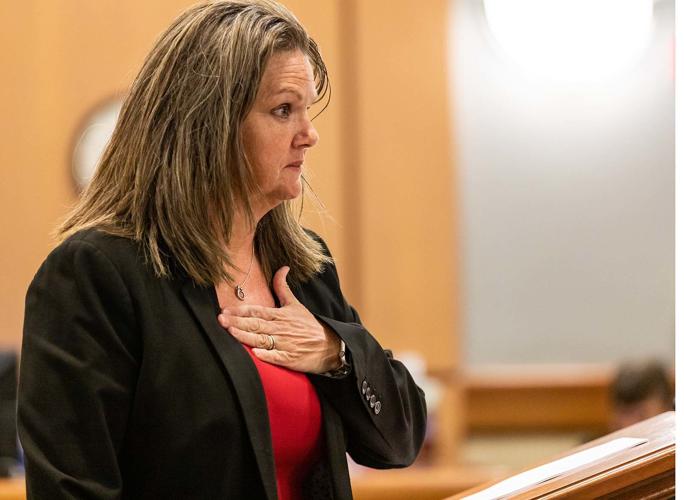 Joseph Meredith, who was found guilty of murder Friday, listens as his attorney Andrew Rhodes delivers his closing arguments in Hardin Circuit Court.

It took less than 90 minutes Friday for a jury to find Joseph Eugene Meredith guilty of murder and abuse of a corpse in the March 2021 death of Angela Kerr.

The only visible reaction from Joseph Eugene Meredith, 32, as the verdict was read was a closing of his eyes.

The verdict came after a day spent on jury instructions and closing arguments. The jury received the case at just after 3 p.m., and returned with a verdict just before 4:30 p.m.

Meredith killed 27-year-old Angela Kerr in March 2021, shooting her multiple times. He then videotaped himself having sexual intercourse with her body.

The jury had three options on the first charge against Meredith, including murder, second-degree manslaughter and reckless homicide. The jury returned the most serious charge, which carries with it a 20- to 50-year sentence.

A good portion of closing arguments focused on the defense’s claims of self-defense and involuntary intoxication.

Both sides agreed the altercation between Meredith and Kerr began with Meredith confronting her about text messages on her phone to another man, and that he held a gun when he confronted her. What happened next was under dispute during the trial.

According to the defense, Meredith was afraid and felt he had to defend himself. According to prosecutors, his behavior was at the very least wanton.

“There was a struggle,” defense attorney Andrew Rhodes said. “He freaked out; he’s scared and paranoid.”

In his testimony during the trial, Meredith told his version of events, claiming that Kerr lunged at him to get the gun he was holding and then started biting him, Rhodes said. He added that Kerr was pushing the gun toward his face.

“It can happen fast,” he said. “You’ve all seen westerns. Those are all single action.”

Defense attorneys claimed at trial that insulin and LSD were added without Meredith’s knowledge to a shot of meth Meredith took prior to Kerr’s death. They claimed it was an attempt to kill Meredith.

In a closing statement that was at times emotional, Assistant Commonwealth’s Attorney Teresa Logsdon disputed claims by Meredith’s defense attorneys.

“He went in with a cocked gun,” she said. “He was the initial aggressor.”

Also, there was no evidence Kerr at the time had a gun or any other deadly weapon, Logsdon added.

Logsdon also reminded the jury of statements Meredith made to his mother during a phone call after the killing, of which prosecutors obtained a recording. On that recording, Meredith said Kerr tried to grab the gun away and it went off, and then Meredith “saw red” and shot her repeatedly.

There were no pleas of self-defense and no claims of having been too intoxicated, Logsdon said.

Logsdon then demonstrated the action of the revolver, cocking it before each shot.

Logsdon also disputed the claim that Meredith was intoxicated to the extent to have a valid legal defense, stating he was able to recall the events and appreciate what had happened, and that he fled and hid from police for several hours.

“He knew exactly what he was doing,” she said.

Kelly McKinney can be reached at 270-505-1418 or kmckinney@thenewsenterprise.com.

Raehme, 23, of Radcliff, is accused of murder following a traffic collision that claimed the life of Tonya Kelly. Prosecutors is accusing Raehme, who was driving northbound in a southbound lane on U.S. 31W near Rural King on Sept. 16, 2021, of being intoxicated at the time of the crash.