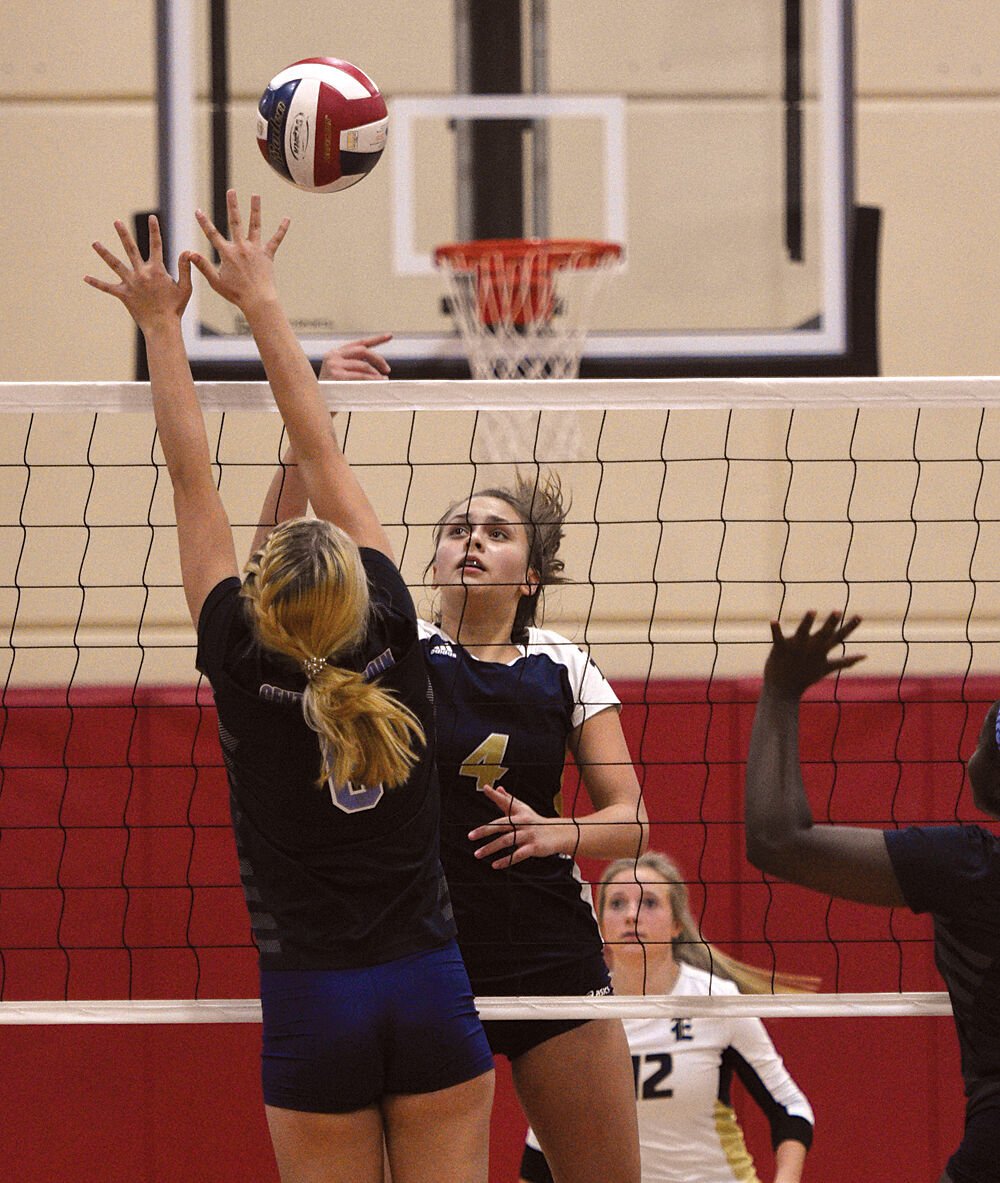 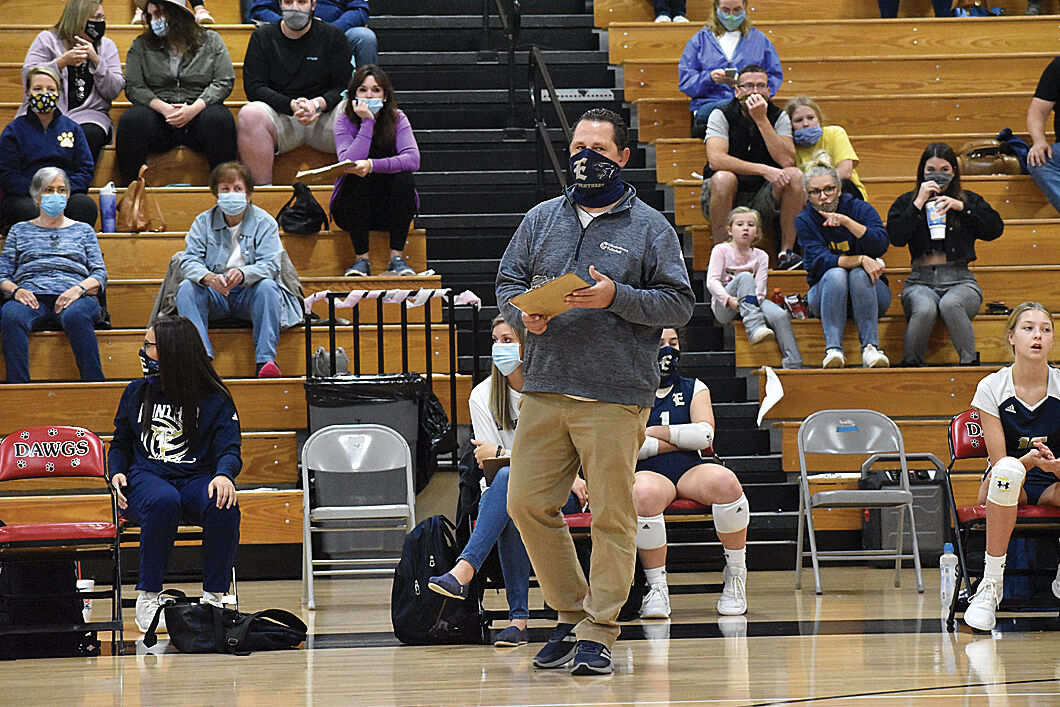 It was a clean sweep for Elizabethtown volleyball in the individual awards of The News-Enterprise Coaches All-Area Team this season.

Coaches nominated student-athletes from their teams to be considered for a place on an All-Area team as well as individual awards. All area coaches were considered for Coach of the Year.

Coaches then voted on a ballot based on nominations. Coaches could not vote for their players or themselves.

Coaches voted on a 5-3-1 scale for individual awards.

Godfrey finished her 2020 season by leading the team in digs with 260. She also led the team in service aces with 57. Her kill total of 250 was second only to Hargan.

Prior to the Lady Panthers’ loss to Mercy Academy in the first round of the state tournament, Godfrey also was named Second Team All-State.

She believes a positive attitude helped her develop into the player she is today.

“Having fun and enjoying it,” Godfrey said. “I know some coaches can be really hard on players and make them lose their love for the game and so I’m just really thankful that (Coach Catlett) hasn’t been one of those coaches for me and that he just always makes it fun. I still love it and I haven’t lost that love for it in these last four years, which I’m very thankful for.”

This positive energy is something Godfrey said she always tries to bring to every match she plays in, regardless of how the match is going.

She plans to bring this approach and the lessons learned at the high school level with her to the college game when she begins playing next season for Belmont University in Nashville.

“I definitely think over the years, it’s helped me out thus far and I think it will continue to,” she said. “In just the being positive aspect and trying to be a good teammate, especially because I’m gonna be around such good players and such high-level players, I’m gonna learn a lot and I’m gonna grow. I think I’m gonna have a couple setbacks or a bunch of setbacks with that too, so I think just being positive and keeping my love for the game strong will help me progress.”

It runs in the family. Clark, the younger sister of the 2019 Area Player of the Year Sydney Clark, received four first-place votes and 23 points to lead the category.

“It feels really good,” Clark said. “We have such great coaches in this district and it’s just amazing because there’s great sophomores out there.”

Clark finished her sophomore season by leading the Lady Panthers in blocks with 115. She also had 325 assists, second only to Filburn, as well as 139 kills and 124 digs.

She attributed this success earlier in her career to the assistance and advice she received from her older teammates. One teammate in particular was Godfrey, who Clark said helped improve her blocking, as well as her leadership skills.

This also included Sydney, who Sarah played with last year as a freshman when the older Clark was a senior. Areas where Sydney helped her the most included hitting and setting.

“She was always telling me what to do,” Clark said of Sydney. “I just always looked up to her for that stuff.”

She added that her coaches have played an important part in her development.

“They always help me,” Clark said. “Sometimes I’m just like ‘Ew, this is awful. I just want to stop and just give up,’ but they kept me going mostly.”

Clark said she has enjoyed getting to know her varsity teammates and coaches over the last two seasons.

During her remaining two high school seasons, she hopes Elizabethtown can continue to achieve the same success it has over the last few years.

“I hope we go to State at least one more time because it’s a really great experience,” Clark said. “Even if we don’t, it’s fine because I feel like if we just try our best, we’ll make it as far as we can.”

For the second year in a row, Cat­lett was selected as Area Coach of the Year by local coaches. He received four first place votes for 20 points. Central Hardin’s Bill Rineker followed with 16 points, including two first-place votes.

“That’s a big nod. There’s a lot of good coaches in our area. I think a lot of them do a great job and for them to nominate me for Coach of the Year, it’s very humbling. I think everybody in our district and in this area works very hard at what they do. I’m very appreciate of it,” Catlett said. “It’s just a big nod to my kids and the perseverance through a weird year. I know everybody had to do things different. They just put their heads down and grinded, so it’s more of an award for them.”

In a shortened season full of COVID-related twists and turns, Catlett guided the Lady Panthers to a 16-6 overall record, including an 11-2 record in 5th Region play. The team reached the state tournament for the second straight year.

Regarding the success of his program, Catlett thought it was important to always be ready to adapt and look for new ways to continue improving.

“If a coach says he’s learned everything, he’s lying,” Catlett said. “I learned a lot from a lot of other people this year and I learned a lot this year about what I should do and how I need to do things different.”

While the team is losing standout seniors such as Godfrey and Filburn, Elizabethtown will have it’s share of talented returners like Hargan and Clark, as well as promising new players.

As a result, he believes the future of EHS volleyball is in good hands.

“I’m exited. I’ve got kids who are buying in, who want to work hard. They want work hard year-round at what they’re doing,” Catlett said. “I’m just blessed to get to coach there and get to have these kind of kids. We’ll have some new faces out next year and we’ll have some old familiar faces and the best part about it is the old familiar faces got to learn off a couple of great kids like (Godfrey and Filburn). They got to learn what it takes and what it means to be a good teammate.”